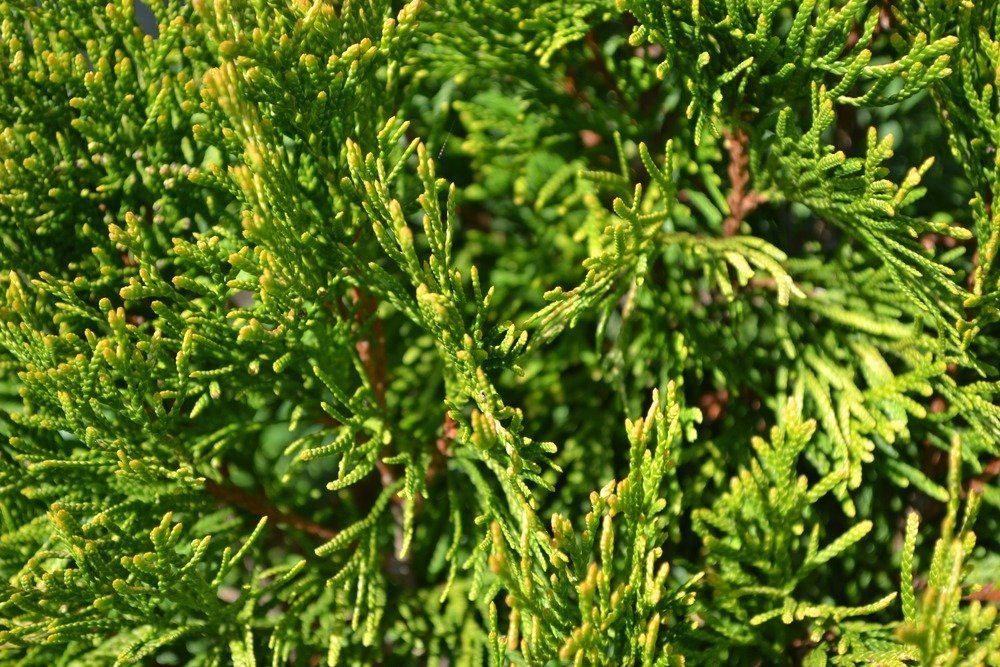 Arborvitae and Juniper share similar purposes. They are both hedge-like bushes and trees that work well to add privacy or to just stand tall and proud around the yard. However, they do have key differences.

Arborvitae tends to be able to handle wetter soil, but can’t stand to be cold or dry. Junipers have a wide range and can handle places that are dry, high in elevation, or cold, as long as they aren’t too wet.

Arborvitae and Juniper have a few similarities, they are both fire hazards, attract many bugs and pests, are useful as privacy cover, and are low maintenance.

Is Arborvitae Considered a Juniper?

Arborvitae and Junipers are not considered the same plant. Junipers are in the Juniperus genus while Arborvitae are in Thuja. They do have similarities though, like both being plants that produce cones.

They also look very similar in shape and structure, so it is easy to confuse them. However, there are a few differences that make them easy to tell apart once you know what you are doing. They also have certain areas where they do better, making them more ideal for one person’s yard than another.

What Are the Differences Between Arborvitae and Juniper?

Arborvitae and Juniper have some pretty big similarities, including their purpose and flammability. But they also have some key differences.

There are many different kinds of Juniper, and some of them may look similar to Arborvitae, but others may also be very different. Both have needle-like leaves, but the Junipers are usually blue-green and grow in groups of three. Arborvitae start with needle leaves, but they flatten and appear more like scales as they mature. 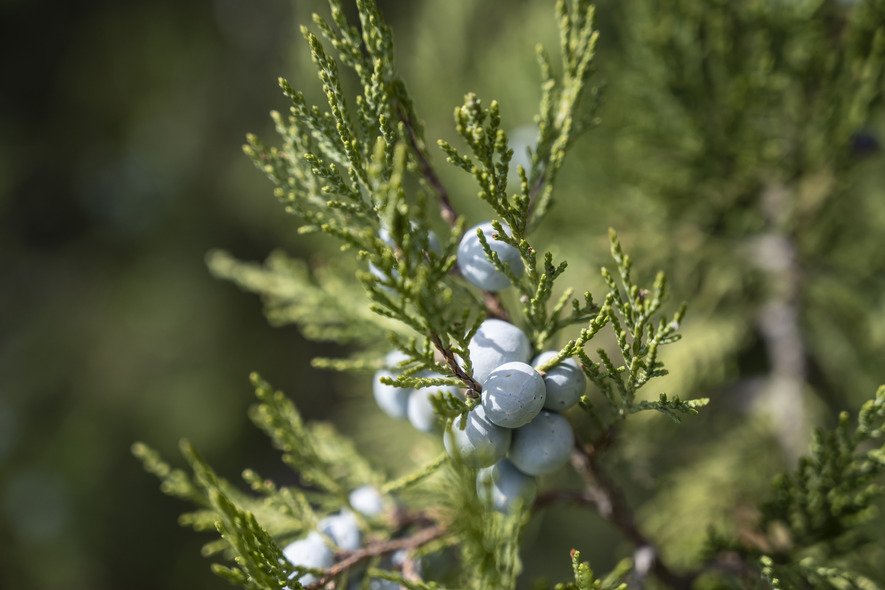 The berries also look different. Arborvitae have cones that are both male and female on one plant and look the same, though the females are often a bit bigger. They also have white flowers that are small and form small red or brown berries later in the season.

Junipers have male and female cones but they don’t grow on the same trees. This means that not every bush produces flowers and berries, as only the plant with female cones will produce them.

The cones also look different. The male cones resemble those of Arborvitae, but the female cones look like berries. These are often blue and look similar to blueberries. The flowers are often small and yellow or green in appearance.

Another difference is their tolerance and range. Junipers have one of the largest ranges of any plants in the world, being found naturally in the Arctic, Africa, North America, and Asia. In fact, the highest tree in the world is a Juniper, which was found at 16,100 feet (4907 m) in Tibet. There are around 60 species and 400 cultivars.

Meanwhile, Arborvitae are native only to Asia and North America, and there are only five different species. Two are in the North American Region. They don’t have a wide tolerance range but like to stay moister than Junipers and tend to be in boggier soils.

What Are the Similarities Between Arborvitae and Juniper?

Are Junipers a Fire Hazard?

Junipers are considered highly flammable due to the resin in their branches. In fact, these plants are so flammable that they are often called gasoline plants by firefighters. This means they are not ideal for near the home, or in areas where wildfires are common. It can severely increase the dangers for your home and family if they are near your house and fires are common.

Are Arborvitae a Fire Hazard?

Unfortunately, Arborvitae isn’t any different for fire danger. Just like Junipers, they are highly flammable. This is because the needles have a highly flammable oil they produce. Additionally, the plant accumulates a lot of dead and dry material on the bottom, which makes it quick to catch on fire from a spark or blaze.

Arborvitae also grow very hot when burned and produce a lot of sparks. This means that they may not only be dangerous for the yard they are next to, but for the neighboring homes and properties as well.

In addition to being highly flammable, Junipers are also big bug attractants. They bring in a large number of insects and other pests. Some common pests that Junipers attract are:

While these aren’t necessarily a big deal in and of themselves, they can attract bigger insects that eat these smaller ones. For example, flies, ants, and bees can all be attracted to the sweet and sticky sap that aphids produce.

Arborvitae also experiences their fair share of pests. The pests are a little different, but no less common. Some bugs they face on the regular are:

Like with Juniper, Arborvitae also attracts bugs that are food for bigger insects thanks to the honeydew they produce. So small insects that are a minor inconvenience can turn into a far bigger problem in no time. 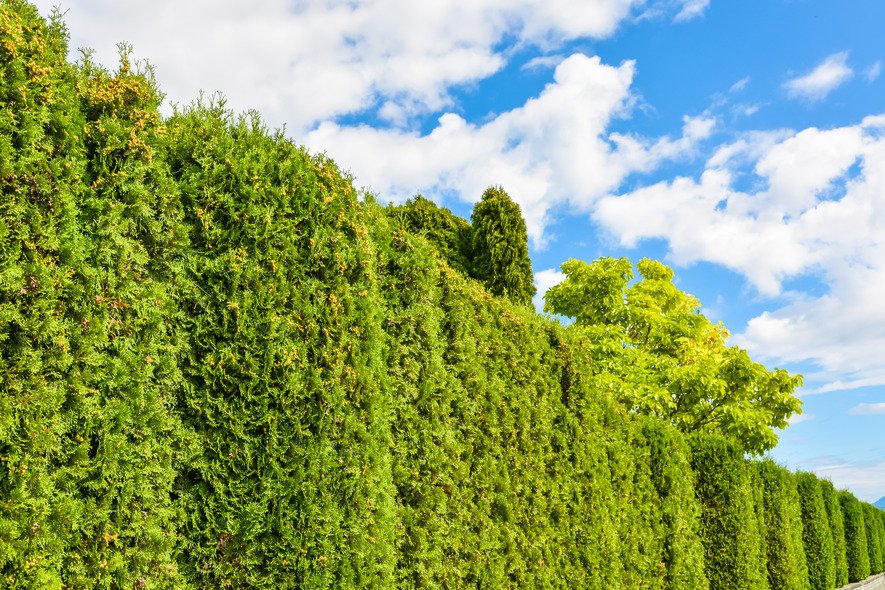 If you want a thick, dense plant that works well to keep any nosy neighbors from spying on your business, an Emerald Green Arborvitae is the way to go. When you are thinking of the ideal bush, you need to consider how high the bush goes, the density of the bush, and if it stays green all year round.

The Emerald Green Arborvitae or Thuja occidentalis smaragd works well for a vast majority of the United States except for the parts furthest in the south. It doesn’t need much care, because it grows slowly. This means it needs to be planted well in advance before it makes a good privacy fence, but it can get very tall and tends to stay very narrow to fit even in small spaces.

While Emerald Green Arborvitae is our favorite, there are a few other Arborvitaes that work well for privacy and may be better suited for different hardiness zones.

If you want to use a Juniper plant for a privacy hedge, the Blue Point Juniper is a great option. It can reach 12 feet (3.6 m) tall. Since Juniper is an evergreen, the hedge keeps your privacy throughout the year. You can grow them in clusters or multiple thin rows to increase the thickness and reduce the visibility through the hedge.

Junipers are considered very low maintenance. They are good for reducing erosion in the soil, so they are usually grown on hills and slopes. All they need is sun and water, and once they are fully grown, they can handle being without sun for a while without any problem.

Though they experience problems with pests, most of their issues aren’t very serious and they don’t often have to be cut back. You could go without ever cutting them back without a problem if that is what you wish.

Most of their serious problems actually come from too much care, like overwatering.

Arborvitae can be low maintenance, but they are a bit pickier than Junipers in their care. They don’t handle drought, wind, or salty soil very well at all, and will often start to brown rather quickly if their situation isn’t ideal.

If you can put them in the perfect place, they don’t need much care besides constant watering and trimming. But if they aren’t somewhere ideal, then they might struggle and be difficult to take care of.

Juniper and Arborvitae may be members of different genera, but they are part of the same family. This is the Cypress family. This is why they share so many similarities, and appear similar to other Cypress plants as well, despite not sharing the name.

Arborvitae and Juniper can look similar at first glance, but they have some key differences. Being able to tell these two plants apart can be important as they have different preferences when it comes to their care.

However, while these plants can make great privacy hedges and are pretty, they can be dangerous to put close to your home if you live in a fire-heavy area.