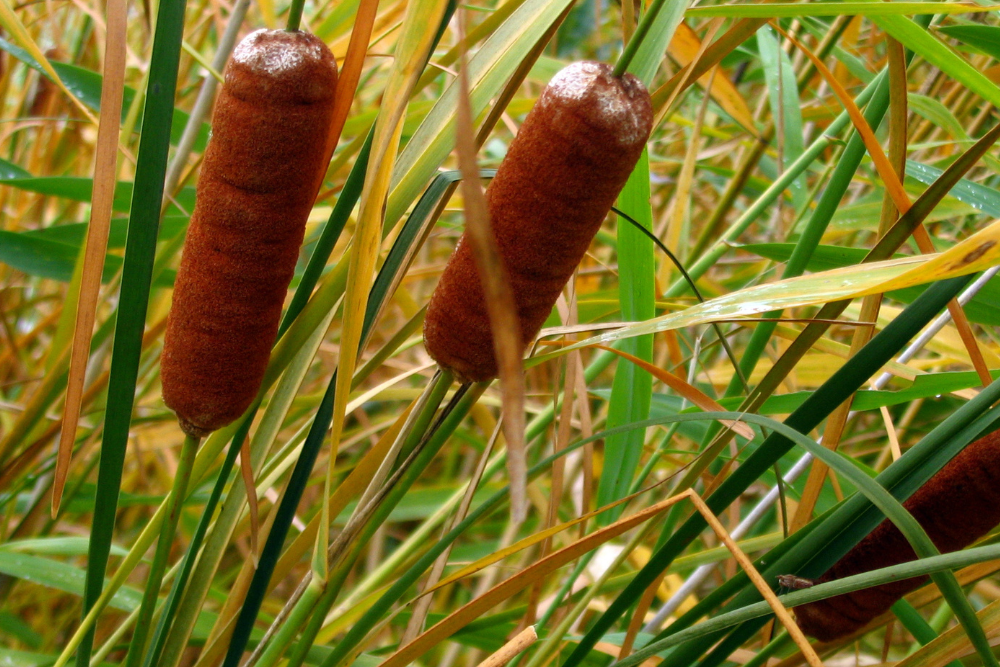 There have recently been videos all over the internet of people eating ‘The Forbidden Corn Dog.’ These are plants found throughout the world that have big brown heads at the top of grassy stalks. So are they edible? And what are they?

Corn Dog Plants are natural, edible weeds often found around bodies of water in various parts of the world and can even be quite tasty if prepared properly.

But that’s not the only benefit that these plants have. They can be used for almost everything. Despite often being called noxious or invasive, they were quite popular with many indigenous people in areas where these plants can be found.

So let’s get started and learn more about the Corn Dog Plant and how you can use it for various purposes.

What is the ‘Forbidden Corn Dog’?

The “Forbidden Corn Dogs” are wild plants known as Cattails. Cattails are usually found near water, such as ponds, lakes, and rivers. They have thick brown flower formations at the top of the plant reminiscent of Corn Dogs, hence the title, ‘Forbidden Corn Dog.’

There are estimated to be about 30 species of Cattails throughout the world. They also have different names worldwide, such as Bulrush, Reedmace, Reed, Punks, Cumbungis, or Raupo.

In some areas of the world and various states in the United States, Cattails can be considered invasive or native. Even those that are native are often regarded as noxious weeds as they can easily start to outcompete other plants in the area.

Cattails are considered a species of broad-leaved grass. They usually stand 5 to 16.5 feet (1.5 to 5 m) tall. They are also often considered to be reed grass. Like other grasses, they grow and spread via rhizomes. These rhizomes are usually located near wetlands or damp soil.

However, there is a little debate on whether they are grass or simply grass-like, with some people considering them more like herbs. Because there isn’t high importance on these plants, as they are often just considered weeds, a lot of research and specific determination of the genus hasn’t yet been done, and there is still a lot of debate. 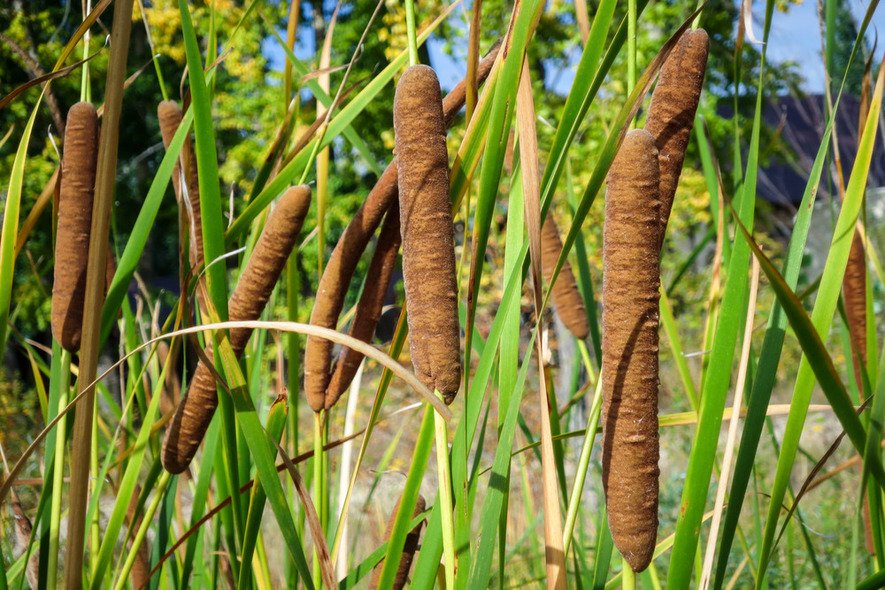 Despite their title as noxious weeds, Cattails benefit many bodies of water. Not only do they prevent shore erosion on lakes, ponds, and other bodies of water, but they can also filter out toxins.

This is because Cattails have nitrogen-fixing bacteria in their roots, allowing them to absorb nitrogen from the water and distribute it throughout the soil. They can also absorb phosphorus and toxins in the water and surrounding sediment.

Scientists are starting to understand their tremendous benefit, taking strides to improve water and soil quality, and are currently trying to figure out how to use Cattail farms for water quality improvement.

Going near Cattails means risking a lot of mosquito bites, unfortunately. Their presence is also a sign that many mosquitos may be present.

Does Burning Cattails Keep Mosquitoes Away?

In the 1970s to 1990s, many people in the New Jersey area had a tradition of burning Cattails in the summer to help keep mosquitoes away. If you grew up in that area, you might remember the tradition.

But does it work?

Burning Cattails does work at keeping insects like mosquitoes away from you. However, it is important to note that Cattails are notoriously hard to burn when they aren’t dried. Even with an accelerant, you may notice you are struggling.

The key is ensuring your Cattails are thoroughly dried before attempting to burn them. This is an effective method when out playing or even at a campsite.

If you just want an excellent torch, these also work. After the Corn Dog Flower head is dry, you can dip it into fat or oil and turn it into a torch.

Cattails are good food for many animals that live around bodies of water. Not only do insects get a lot of food from these grass-like plants, but so do muskrats, crayfish, and even raccoons.

Animals that need a nutrient-dense meal will often eat the brown flower pack, while other animals, like insects and crayfish, enjoy eating the stems, leaves, and roots.

Are Cattails Poisonous to Humans?

Cattails are not poisonous to humans. Some people think they are, but it is a similar-looking plant known as the Poison Iris. If you cannot tell these two apart, it is best to avoid them entirely, as the Poison Iris can be very harmful.

Thankfully, the Iris, while the plant itself may look similar, doesn’t have the big, corn-dog-shaped head. So if you don’t see that, it is best to avoid the plant. While it may be a Cattail, it isn’t a good idea to risk it.

Can You Eat Cattail Plants? 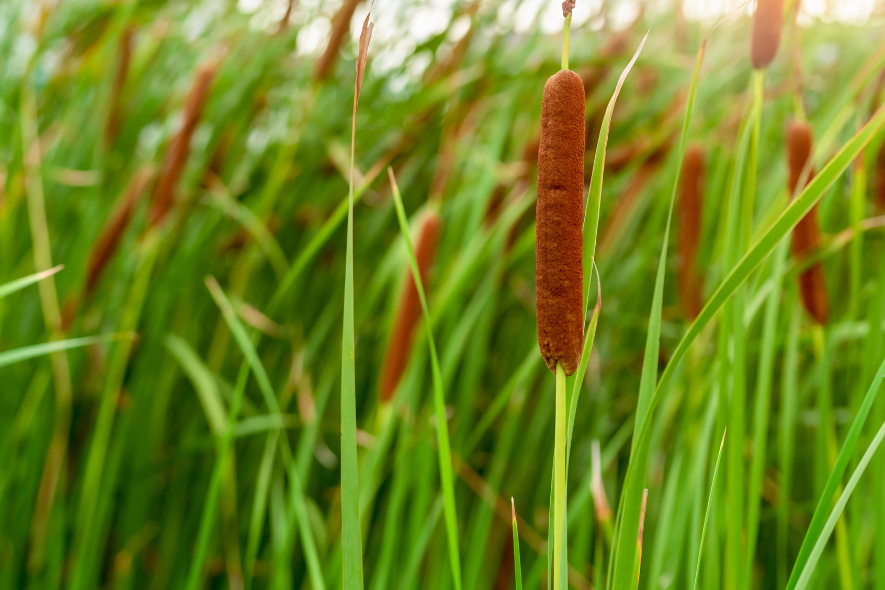 If you know Cattails as Forbidden Corn Dogs, you have also likely seen videos of people eating these brown plants. Perhaps you are wondering if Cattails are edible.

The answer is that all parts of a Cattail are edible. While you may not enjoy eating the flower head of a Cattail without preparation, everything from the stems to that head can be eaten by people and provide nutrients.

The seeds can be ground up and turned into flour. The stems you can cook and serve in a stew, hot pots, stir fry, and even salads.

Some people describe the new shoots, by far the tastiest part of the plant, as being almost corn-like in flavor. The stems can be eaten raw if they grow in cleaner waters and soil.

These plants are known as Survival Supermarkets because they grow in such big clumps and provide plenty of sustenance.

Cattails are often labeled as weeds. However, they have a lot of benefits. On top of being edible, these plants can be used to stuff pillows, make reed furniture, insulation, insect repellent, kindling, hats, arrow shafts, and even as medicine. With enough practice, some people have even turned Cattails into clothing.

On top of using the fluff for cotton balls, Cattails have two different antiseptic forms. The burned leaves of Cattail and the sap at the base of the plant help prevent wound infection. Some people even swear that sap is a useful way to stop toothaches.

They are full of nutrients as well. Young stalks provide Vitamins A, B, and C as well as potassium and phosphorus.

If all of that isn’t enough, scientists are also working on the way to make biofuel out of these plants. While they are weeds, they have great benefits to the environment and people.

What is Cattail Fluff Used For?

Cattail fluff, which comes from the Corn Dog part of the plant, is used for insulation and stuffing. You can make pillows from it, keep your shoes warm and soft, and even put them under your clothes for an extra layer of warmth.

Even though Cattails have been given a bad rap for decades, they have many benefits for the environment, animals, and people. They can be used for almost everything, including nutrition, furniture, clothes, fuel, etc.

Corn Dog Plants are an edible weed often found around bodies of water in various parts of the world and can even be quite tasty if prepared properly.

While you might not want to bite directly into the Corn Dog part of the plant once it gets its characteristic brown look, it can be used for many things, and if properly cooked, even the Forbidden Corn Dog can be eaten, although you treat it more like corn than a Corn Dog.