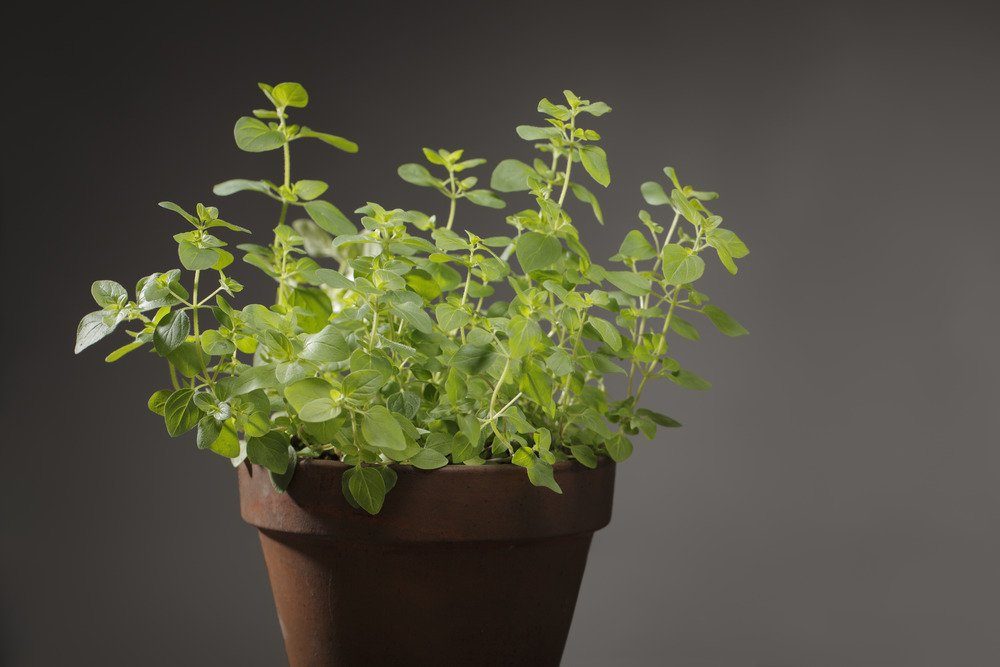 Basil and Oregano are often used together as they enhance each other’s flavor profiles. However, when trying to make your own dish and aren’t sure which herb will work best, it can be hard to determine which one fits better.

Though they are used in conjunction, they have very different flavors, with Basil being sweeter and minty. Oregano is often pungent and slightly bitter. There are also a lot of different Basils, and each one has a distinct flavor profile.

Oregano is used more globally in savory dishes, as it adds an excellent flavor to cooked meals without overwhelming the main flavor, while Basil tends to be ideal as a fresh component to a dish or even desserts.

Sometimes Basil and Oregano can be interchanged, but better options exist when in need of a similar flavor profile. Basil doesn’t do well being cooked, so it is a much better option sprinkled onto a dish at the end or on a cold dish or sauce. Using Basil can sometimes dye the dish, leaving it with an unappetizing color, while Oregano can be used during the cooking process.

Basil has a more herbal flavor that is fresh and slightly minty. It has also been described as sweet and peppery. Different kinds of Basil, such as Lemon Basil and Holy Basil, can change up the flavors a little bit. For example, Holy Basil is a little more spicy and sweet, while Lemon Basil has a hint of a citrus flavor.

On the other hand, Oregano is a very pungent herb. It has a slightly bitter taste. Some describe it as having earthy or musty flavors that may taste acidic in large quantities. It shares a bit of its flavor profile with Basil by having some subtle minty notes.

Is Basil or Oregano Better?

If you look at the health benefits, Oregano has a few more. Oregano has more carbs, fats, protein, and fiber. Additionally, Oregano has no cholesterol and a low glycemic index. It also has a lot of nutrients like potassium, iron, calcium, potassium, copper, zinc, vitamin E, folate, vitamin K, and vitamins B1, B2, B3, and B5.

Basil has less sodium. It also has more specific vitamins, such as vitamins A and C. It can also reduce the risk of lung, skin, liver, and oral cancers. It also reduces high blood pressure and is full of antioxidants.

As for which one tastes better flavor-wise, it is dependent on the person. Both have fairly unique flavors that may make one preferable to the other to someone’s taste buds. Also, some meals may benefit from one over the other.

Most dishes that use one though tend to use both. While the flavors don’t easily replace each other, they do complement one another, which makes them a good mix to use together. Additionally, they grow natively in similar regions, so many countries utilize both of these herbs in their meals.

Can I Use Basil Instead of Oregano? 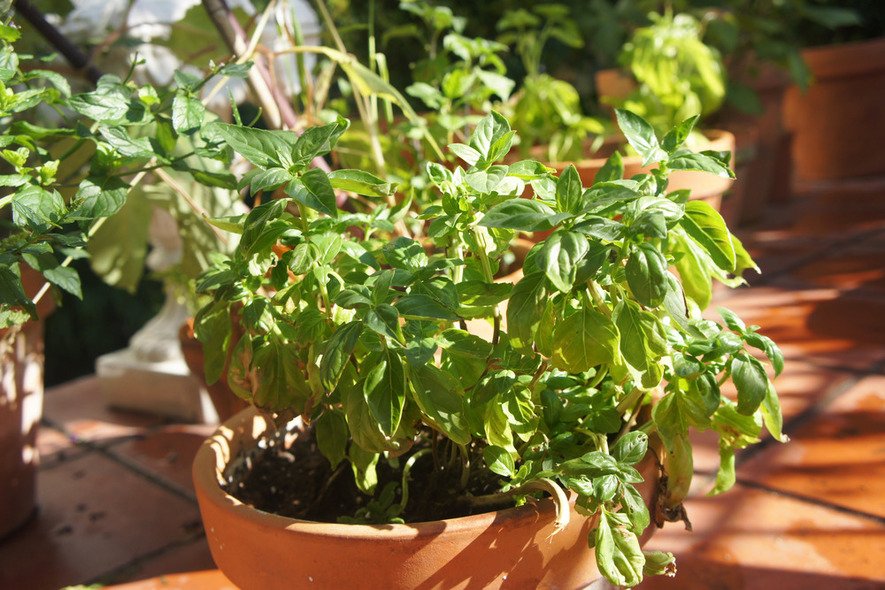 While you can technically substitute Basil for Oregano, their flavors are different enough that it will likely change the flavor profile of your dish. However, Basil is weaker in flavor than Oregano, so it is a good option to eliminate some of the strong and pungent flavors that come with Oregano if you don’t like the taste.

Additionally, Oregano loses some of its flavor when dried. However, Basil tends to get stronger. If you are using dried herbs instead of fresh ones and want a stronger flavor profile, then using dried Basil is a better option than dried Oregano.

There are a few different Basils out there, about 100 or so. Most of them have distinct flavor profiles, so while the traditional Basil you usually use may not be an ideal replacement for Oregano, another option may fit your dish a little better.

When using Basil, you can’t always add it at the same time as other herbs, like Oregano. You may have noticed that when you eat Basil fresh, it has a potent flavor, and you may be confused why it is often called a mild flavor.

This is because Basil starts with a fairly strong flavor but loses it pretty quickly. If you want to get the most out of your Basil, add it to the last minute of cooking.

If you are looking for a proper substitute for Oregano, Marjoram is widely considered the best. However, Italian seasoning and Thyme can also be a decent replacement depending on the flavor you need to replicate most from the Oregano.

When Should Basil Be Added to a Dish?

Basil can be added to many dishes, especially when you add it fresh to a dish. Some examples of where Basil shines are:

Thanks to its mild sweetness, Basil works well with savory and sweet foods, so it has a wide range of meals that it can accompany.

What is Oregano Used For?

Despite growing throughout Asia, the Mediterranean, Mexico, and the United States, Oregano is often used in Mediterranean cuisines, specifically in Italy. However, it is still one of the most common herbs used worldwide. Oregano does well in the following dishes:

As you can see, there is a lot of overlap between Basil and Oregano. However, due to the many varieties of Basil and the fact that it is a bit milder, there are many more ways Basil can be used compared to Oregano.

Basil or Oregano on Chicken? 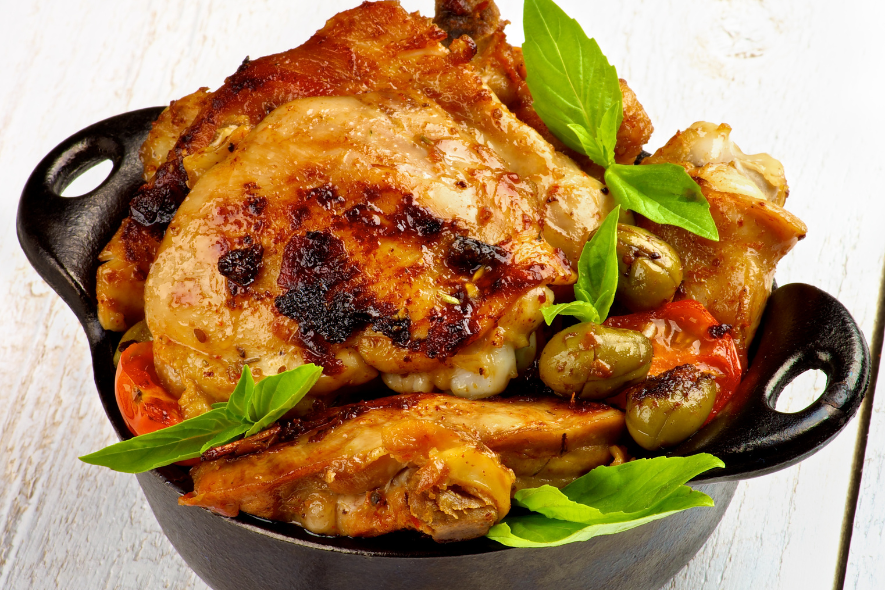 Basil and Oregano can both go with chicken. However, most people find that Oregano goes best with most chicken dishes. This is because it works more with the flavor of chicken and does better being cooked with the meat.

Additionally, Basil has a bad habit of dyeing light-colored meats like chicken, turning them into a color that doesn’t appear very appetizing. However, that doesn’t mean that Basil doesn’t go with chicken. If you want a fresh component to your chicken dish, making a pesto or putting it into a salad with cold chicken is a great option, especially during summertime.

Other herbs that go well with chicken include:

Basil or Oregano on Pizza?

Basil and Oregano both work for pizza in similar ways. Both can be used in the pizza sauce to add flavor to the tomato, and they are often used in sauces to add a lot of depth.

However, they can be sprinkled on top of the pizza when fresh. Basil is widely used with margarita pizzas on top with fresh mozzarella and tomato slices. Oregano is used with various traditional Italian pizzas and works with almost any flavor.

Most people consider Oregano the better topping to put on top of pizzas, as it goes with pretty much any topping you can think of. Additionally, the Oregano flavor usually melds with the other flavors of the pizza and enhances the flavors rather than overwhelming or hiding them.

Other herbs you can put on pizza include:

Basil and Oregano are amazing spices that are used throughout the world. They work with so many dishes to add a fantastic flavor and enhance the whole meal. However, despite their similarities, it isn’t recommended that they be used to replace one another.

Oregano is used more globally in savory dishes, as it adds an excellent flavor to cooked meals without overwhelming the main flavor, while Basil tends to be ideal as a fresh component to a dish or even added to desserts.

Basil and Oregano also have health benefits. Oregano contains nutrients like potassium, iron, calcium, potassium, copper, zinc, and various vitamins. Basil has vitamins A and C and contains antioxidants. Both herbs are a wonderful addition to your kitchen stock!