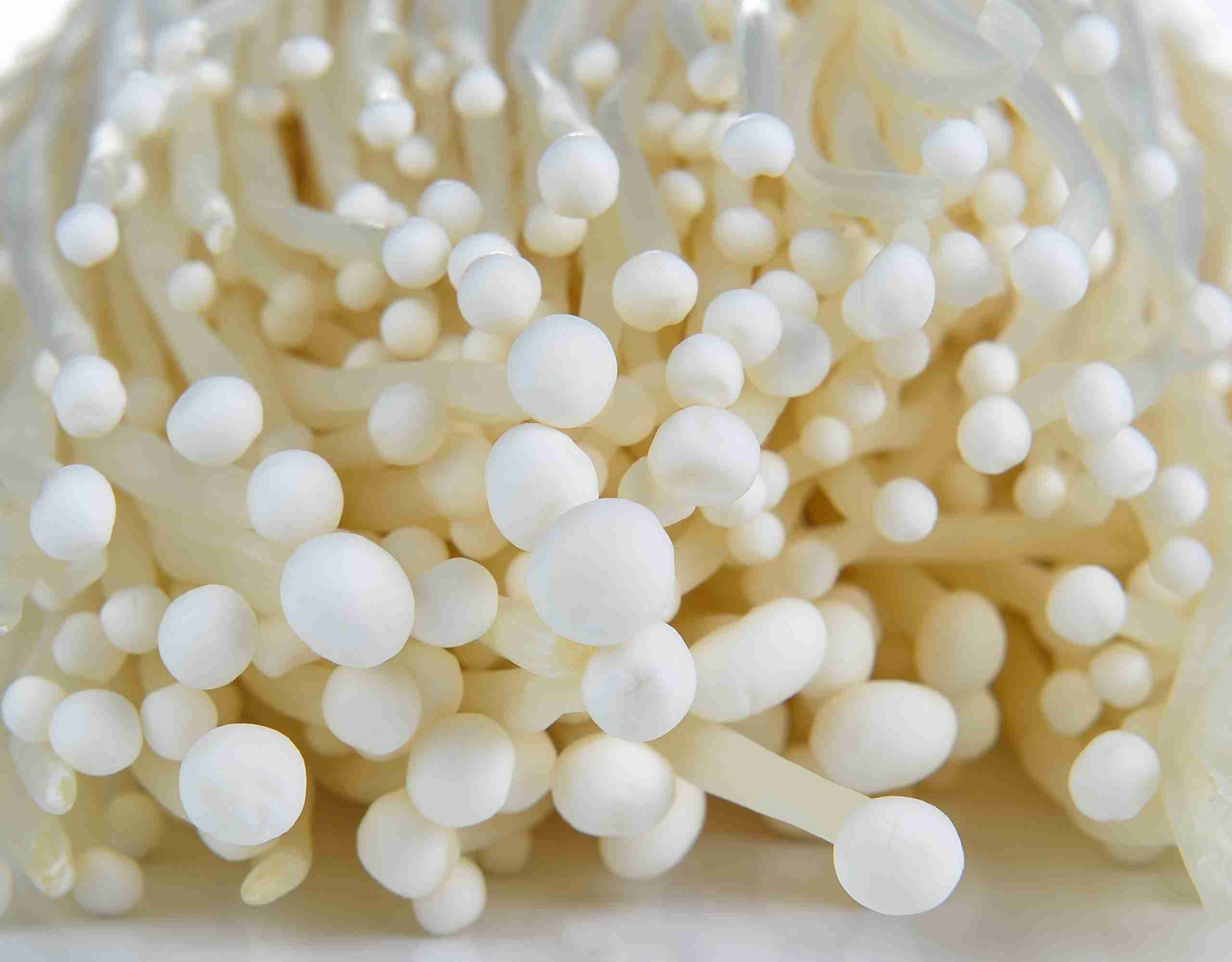 From soups to stir-fries, so many dishes can be made tastier with the addition of mushrooms. Enoki mushrooms are mild-tasting mushrooms with a slightly fruity flavor that are used to add texture and earthiness to dishes. If you’re a soup lover, this is the perfect vegetable to grow at home.

If you want to know how to grow Enoki mushrooms at home, it’s pretty easy. Enoki mushrooms can be grown at home using spawn, a hardwood growing medium like sawdust, a glass container, and a dark location to store your mushrooms while they spore.

We’ll give you step-by-step instructions so you can start your mini mushroom farm at home in no time.

What is the Best Substrate for Mushrooms?

Enoki mushrooms can be found growing on logs and dead trees in the wild. To replicate this natural environment in your mushroom farm, use hardwood substrates such as sawdust or hardwood chips. You can buy oak pellets from gardening stores and soak them in hot water to create a soft substrate similar to sawdust.

Some gardeners have also used substrates like coffee grounds and hay. If you use hay, you must soak it and boil it to kill any microbes that could harm your mushrooms.

Enoki mushrooms require high humidity to grow (about 90-100%) and do best in temperatures ranging from 72-77°F (22-27°C). The best way to ensure your mushrooms get this high of humidity is to grow them in batches in small clear containers. These clear containers (glass or plastic) act like a mini greenhouse, reusing the water in the soil to create a stable, moist environment.

How to Grow Enoki Mushrooms at Home 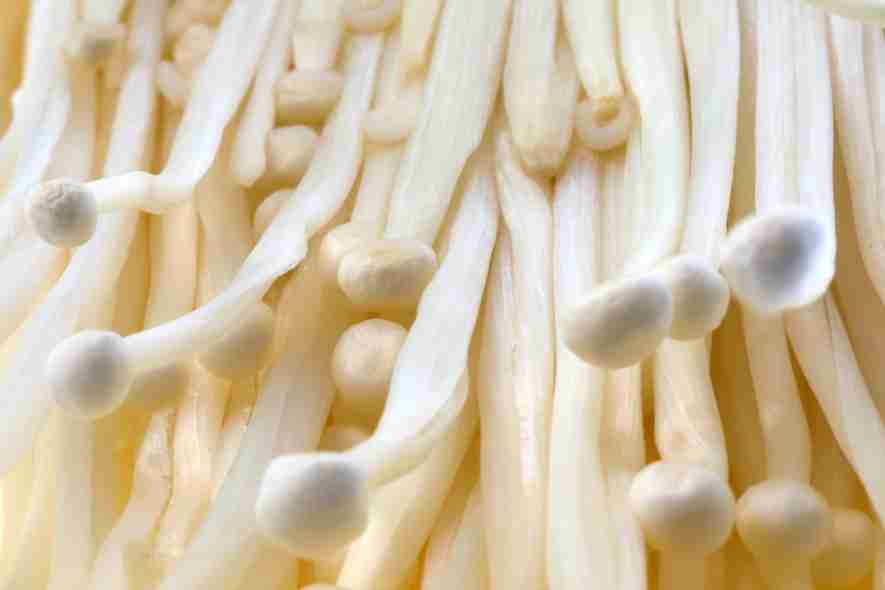 Growing your mushrooms from scratch is easy and can save you money at the grocery store. Plus, we all know homegrown food tastes better! Here’s our step-by-step breakdown of the process.

How Long Do Enoki Mushrooms Take to Grow?

From the time when you mix the spawn with the substrate, it takes about 2-3 weeks for the mycelium to form. Not long after, you will begin to see pinhead caps sprout from the substrate. Your mushrooms should be ready to harvest 14-20 days after the first pinhead cap spotting. This will, of course, depend on the conditions and temperature.

Can You Grow Enoki Mushrooms From Cuttings?

It’s possible to grow Enoki mushrooms from the leftovers of store-bought mushrooms. The success rate is relatively low for this method of growing, but if you want to give it a go, here’s how:

Where Does Enoki Mushroom Grow? 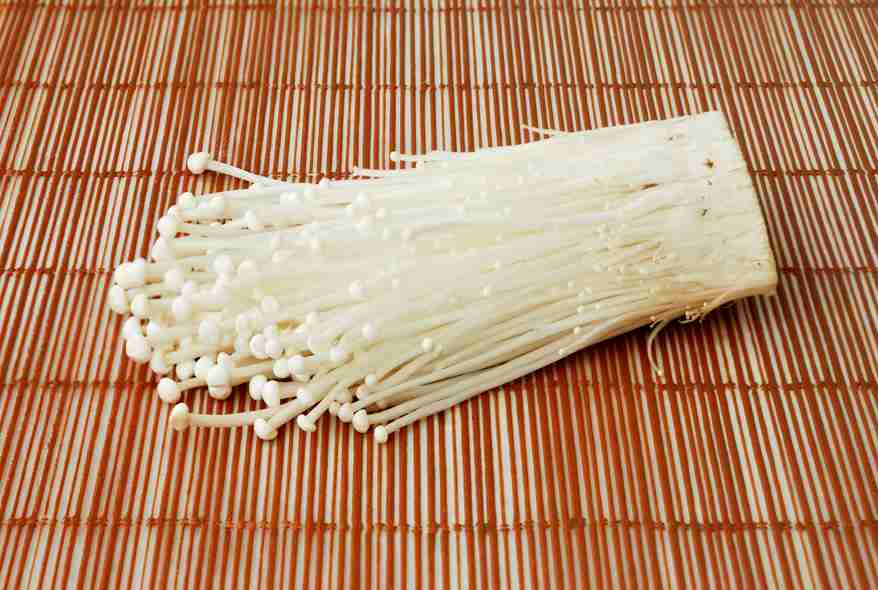 Enoki mushrooms are native to Japan, China, and Korea and are commonly used in each country’s cuisine and traditional medicine. Enoki mushrooms have been growing in this region of the world since 800 BCE!

Enoki mushrooms can be found in the wild on deadwood, stumps, and trees. They have a fondness for the Chinese hackberry tree but can also be found growing on oaks, walnut, and persimmon trees.

Wild Enoki mushrooms are much more orange in color than the Enoki mushrooms that can be found in stores. The cultivar we enjoy today was first invented by the Japanese and gave the mushroom its long skinny features and unique texture.

What Does Enoki Mean in Japanese?

Enoki (Flammulina filiformis) is also known as Enokitake in Japanese. Its Japanese namesake comes from the fact that it was cultivated in Japan and is heavily featured in Japanese cuisine.

Enokitake is a combination of two words. “Enoki” is the word for Chinese hackberry, referring to the tree where these mushrooms are commonly found. “Take” is the Japanese word for mushroom. So together, they mean “Hackberry mushroom.” A fitting name!

Although they don’t have much flavor or color, Enoki mushrooms have some surprising health benefits! They contain essential vitamins like B vitamins and fiber. They are also high in niacin, which helps develop the brain and regulate cholesterol.

When is Enoki Mushroom Season?

In states further south, golden Enoki can be harvested throughout the winter. They are often found on dead trees and favor elms and willows in North America. You must be careful when harvesting wild Enoki because they look similar to other poisonous mushrooms. Traits that make golden enoki unique are:

Always forage with a mushroom expert until you become better versed in which mushrooms are which.

Even if you don’t have the space for an outdoor garden, it’s always exciting when you can grow small amounts of the food yourself. Growing food is a great way to practice self-sufficiency and a rewarding hobby. Enoki mushrooms are the type of food that can be grown even in the smallest condos or apartments.

Enoki mushrooms can be grown at home using spawn, a hardwood growing medium like sawdust, a glass container, and a dark location to store your mushrooms while they spore.

Within 2-3 weeks, your mini mushroom farm will grow mycelium. Shortly after, you should see Enoki mushrooms pop up from the substrate. As long as you control the climate, you can grow these unique mushrooms all year.