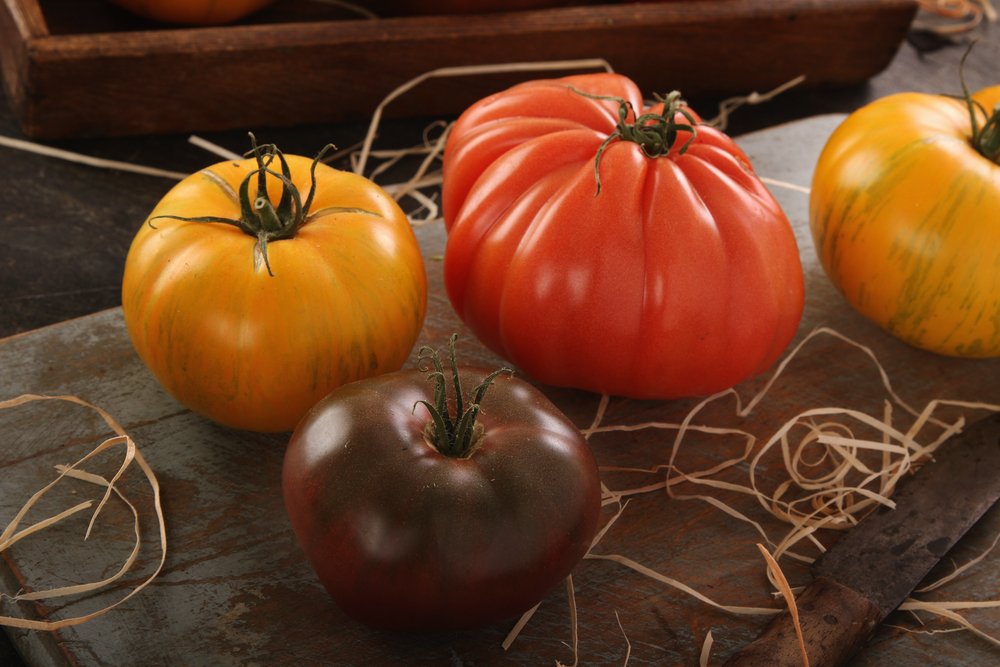 When looking at tomatoes, you may come across some of the more popular varieties known as Black Krim and Cherokee Purple. However, just by looking quickly online or at pictures, it can be hard to tell the difference. So what exactly makes these two different? And why are they so similar?

On the surface, Black Krim and Cherokee Purple tomatoes look very similar but when it comes to size and flavor, their differences stand out. The Black Krim tomato has a bold, smoky flavor that is tart and acidic and the plant grows as high as 6 to 10 feet in height. The Cherokee Purple tomato has a subtle, smoky flavor that is also acidic but with a hint of sweetness and the plant grows 4 to 6 feet in height.

What Is the Main Difference Between the Two Tomato Varieties? 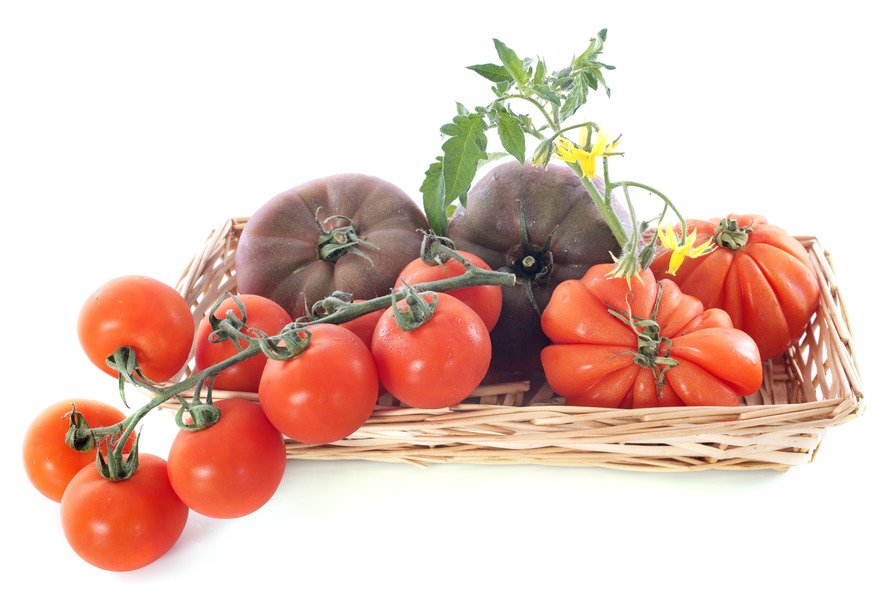 Honestly, even after looking at all of the information above, it still isn’t easy to tell the difference. From our own experience and when talking to experienced tomato growers, the biggest difference that anyone can point out is the flavor profile.

While they may look, grow, and be used the same way, their subtle flavor differences make them better for specific meals.

This table is a quick guide to identifying the subtle differences that separate the Black Krim and Cherokee Purple tomato varieties.

Black Krim tomatoes are very intense in flavor. They are tart and acidic with little to no sweetness in them. They are smoky and almost salty in their flavor.

Black Krim is a popular variety that consistently gets good reviews thanks to its intense flavor and is well-known throughout the west coast.

Do Black Krim Tomatoes Have a Lot of Acid?

These tomatoes don’t have more acid than other tomatoes. However, since they are lacking in sweetness, they feel and taste a lot more acidic than other varieties of tomatoes.

What Type of Tomato is Black Krim?

Black Krims fall under Beefsteak tomatoes. These are tomatoes that are large and meaty.

Generally, these tomatoes don’t have a regular circular shape. They are bulbous and irregular ovals. Often, the shape is compared to that of a kidney bean.

Beefsteak tomatoes are considered an indeterminate variety, which means they produce fruits until they experience their first freeze.

What Are Black Krim Tomatoes Good For?

Due to being a Beefsteak tomato, it makes an excellent tomato to eat raw. They hold their shape and don’t fall apart. These are known as ideal sandwich tomatoes.

Since they have a bold flavor, they are good in recipes where the tomato is the star of the show, such as tomato sandwiches with mayo or a tomato and mozzarella salad.

Yes, the Black Krim tomato is indeed an heirloom variety. It gets its name from the Ukrainian word for Crimea, which is the peninsula where the Black Krim first originated. It was said to be cultivated as soldiers gathered and saved the seeds after the Crimean War.

Black Krim tomatoes are average in difficulty to grow compared to other tomatoes. The most important part of growing a Black Krim is to make sure that they have the right amount of moisture. Too little and you risk your fruit cracking before it is ready.

Black Krim tomatoes need about 1 to 2 in (2.5 to 5 cm) of water per week usually. They do best in hardiness zones 10 and 11 but can stretch out to 6 and 7 with a little extra care. These zones help to determine where certain plants can thrive and grow naturally. If you are unsure of the hardiness zones where you live, you can easily look them up.

How Big Do Black Krim Tomato Plants Get?

Black Krims are large plants. They can easily reach 6 feet tall inside a trellis, but when vertically staked, they can get up to 10 feet. However, that is on the tall end. On average, they reach about 4 to 6 feet.

Black Krim tomatoes themselves tend to be a little smaller than Cherokee Purples. They average 6 to 12 ounces. They generally reach about 3 inches in length.

What Do Black Krim Tomatoes Look Like When Ripe?

Black Krim tomatoes are large dusky red fruits that have dark green to brown shoulders. They are called black and purple bruised tomatoes. When cut open, they tend to be a deeper red inside than their Cherokee Purple companions. However, that interior color can be pretty variable.

Cherokee Purple tomatoes are often described as having a rich and smoky flavor. The end note is more earthy. Overall, the taste is a subtle flavor that doesn’t overwhelm the palate. They also have a mellow sweetness at the end.

The Cherokee Purple has a stronger acidic, tart flavor as well as a burst of sweetness that can brighten up any meal.

Do Cherokee Purple Tomatoes Have a Lot of Acid?

Cherokee Purple Tomatoes do have a lot of acid. However, instead of being sharp and unpleasant, it is a refreshing layer of acidity that brightens up any dish. It is a little tart at the end as well.

What Type of Tomato is Cherokee Purple?

Like the Black Krim, the Cherokee Purple is also a Beefsteak tomato. This means they are an indeterminate breed as well and can fruit and flower continuously throughout the growing season.

They are similar in shape and size to the Black Krims thanks to being a similar style of tomato. They are large and irregular-shaped.

What Are Cherokee Purple Tomatoes Good For?

Though these tomatoes can be canned and used in soups and stews, where they shine is when they are used fresh. Their subtle flavors shine on sandwiches or as part of a salad.

Since they are a little more subtle in flavor, it is better for meals where you want a boost of acidity and smoky without the tomato being overpowering.

Cherokee Purple tomatoes are indeed heirloom. This means that they can produce offspring that look nearly identical to them and they are bred from plants that have been around for many generations.

This is the main difference between heirloom and hybrid tomatoes. Hybrids are made from a mix of tomatoes, so their offspring can have quite a large variety.

This tomato has a long history and can be traced back to Tennessee where they were presented by the Cherokee tribe, hence the name.

Compared to other tomato plants, it is in the middle range for growing tomato plants. It isn’t the easiest, nor is it the hardest.

Some small hybrid tomatoes may grow a lot easier. However, if you want to grow these plants, it is a good idea to buy starter plants instead of trying to grow them from seeds.

They also grow best in hardiness zones 5a-8b throughout the US. This tends to be anywhere from mid-Texas up to Iowa, so if you live in one of those two states or anywhere in between or parallel to them, you may be in an area where these tomato plants naturally grow.

How Big Do Cherokee Purple Tomato Plants Get?

Cherokee Purple tomatoes can reach up to 4 to 6 feet in height and spread out by about 18 inches. The fruits themselves get anywhere between 3 to 5 inches and can weigh up to 12 ounces easily.

What Do Cherokee Purple Tomatoes Look Like When Ripe?

When Cherokee Purple tomatoes are ripe, they tend to be large with a deep red color. Near the top of the tomato, it tends to be dark green. When cut, they may have a dusky red or purple color around the outer edges.

There aren’t a lot of differences between the Cherokee Purple tomato and the Black Krim tomato, especially when it comes to appearance and shape. While it is true that they are both heirloom Beefsteak tomatoes, they also have some distinct differences.

Their flavors and sizes are two key ways to tell these tomatoes apart, despite being found in completely different parts of the world. The Black Krim variety tends to be a bit bolder and less sweet, while the Cherokee Purple is sweeter with a pleasant hint of acid to brighten up any dish.

The Black Krim plants also tend to be much larger, reaching up to 6 to 10 feet in height while the Cherokee Purple plants grow 4 to 6 feet in height.