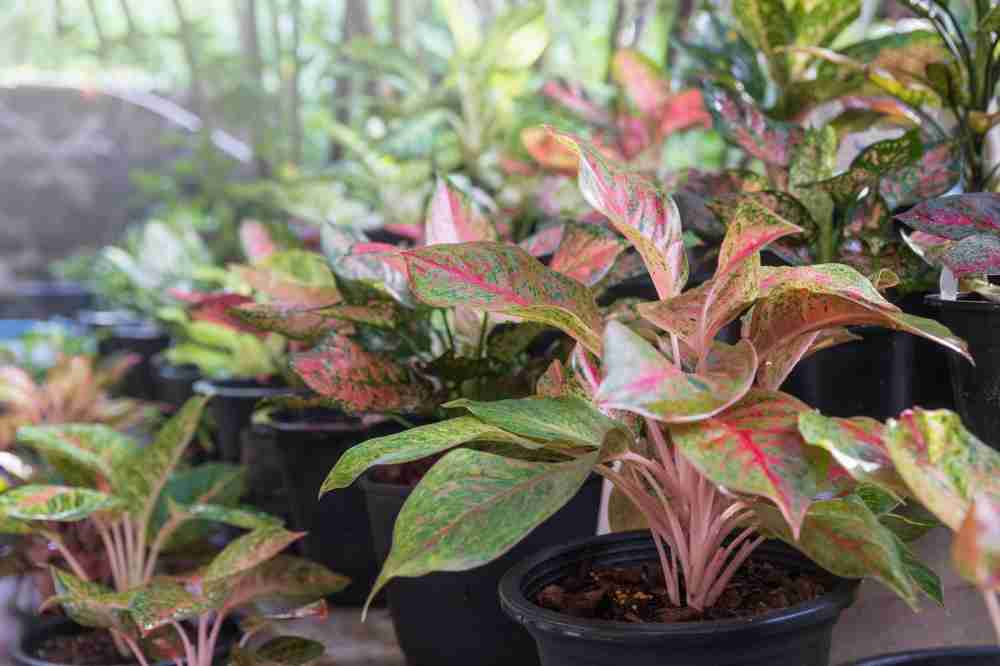 Dieffenbachia and Aglaonema’s beautiful bright green speckled leaves are their most sought-after attributes. But due to their overwhelming visual similarities, it’s common for these two plants to get mixed up. If you’ve brought home a new plant without knowing the species, it can be a headache to figure out one from the other.

To identify whether you have a Dieffenbachia or an Aglaonema, you need to look at the shape of the leaves, coloration, size, and number of veins on its leaves.

Let’s look at these identifying features in greater detail and learn more about these two similar houseplants.

Are Aglaonema Related to Dieffenbachia?

Aglaonema, also known as Chinese Evergreen, is a popular perennial tropical houseplant. It belongs to the family Araceae and is native to tropical and subtropical Asia. In the wild, Aglaonema grows  in shady, humid rainforests.

Dieffenbachia is a tropical perennial as well, also in the family Araceae. However, Dieffenbachia is native to Mexico and South America rather than Asia. So the two are loosely related but are from completely separate areas of the world.

Despite being from different continents, these plants share a striking visual similarity and are commonly misnamed. But as similar as they look, there are some important differences.

How Do You Identify an Aglaonema from a Dieffenbachia?

If you’re scrolling through pictures and are still stumped about which plant you have, here are some distinguishing traits to look out for. 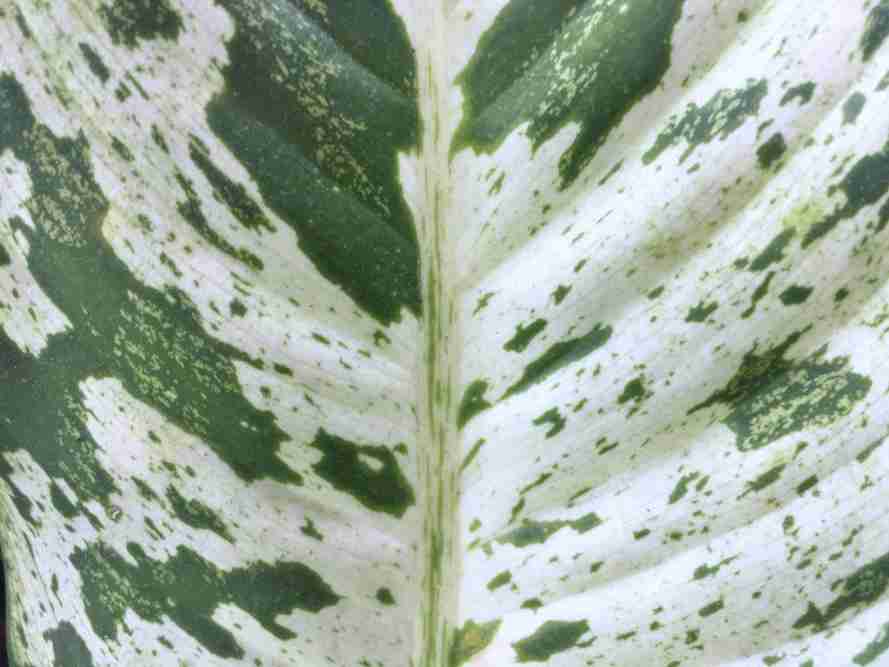 The most popular species of Dieffenbachia and Aglaonema are the variegated varieties. Their leaves are often speckled and covered with various lines and patterns.

Aglaonema is much more likely to have silver-colored patterns on its green leaves. Often, the silver is near the center vein, while the edges stay green. Pink is also a common color variegation for Aglaonema that is rarely seen on Dieffenbachia.

Dieffenbachia often has a white-colored vein in the center of the leaf. The leaves themselves are mainly deep green, with lemon-lime or cream-colored variegations. A good rule of thumb is if the plant has any trace of pink or silver, it’s more than likely Aglaonema.

Dieffenbachia tends to grow upwards on stalks that resemble canes. Some full-grown varieties get up to 3 feet (90 cm) tall, while others can reach up to 10 feet (3 m)! Conversely, Aglaonema grows much closer to the ground, like a shrub. The maximum height of Aglaonema is only about 2 feet (60 cm).

However, certain species have growth habits that go against the norm. Dieffenbachia “compacta,” for instance, grows close to the ground and has a maximum height of only 2 feet (60 cm).

Keep in mind that juvenile plants can be difficult to classify this way since they haven’t reached their maximum height.

Is Aglaonema a Flowering Plant?

Aglaonema is from the aroid family, and aroids produce inflorescence. Inflorescence is a cluster of flowers that usually grows from a spike called a spadix.

Peace Lilies and Calla Lilies are two other well-known plants with a spadix. Like these plants, the Aglaonema spadix is white and surrounded by a spathe. This spathe protects the flower and looks like a hood or petal.

Why is Dieffenbachia Called Dumb Cane?

Dieffenbachia is sometimes referred to by its common name, “dumb cane.” As you can guess, this name can be problematic.

But how did this name come to be? Dieffenbachia contains calcium oxalate crystals, a mineral known to irritate the mouth and stomach if ingested. Some liken the sensation to chewing on glass!

Historically, plants containing calcium oxalate crystals were used as a weapon or punishment. Given this negative history and negative connotation, Dieffenbachia is the politically correct and more pleasant sounding name.

Aglaonema contains the same poisonous calcium oxalate crystals as Dieffenbachia, with the same nasty side effects. Although ingesting Aglaonema is rarely toxic for humans, this plant can be very toxic for cats and dogs.

Since Aglaonema is often housed indoors, there’s a higher probability that curious cats or dogs may accidentally ingest it. Symptoms of calcium oxalate crystal poisoning include:

If you have an overly curious pet, try housing your Aglaonema in an off-limits room. Or, to be absolutely safe, avoid this plant altogether. 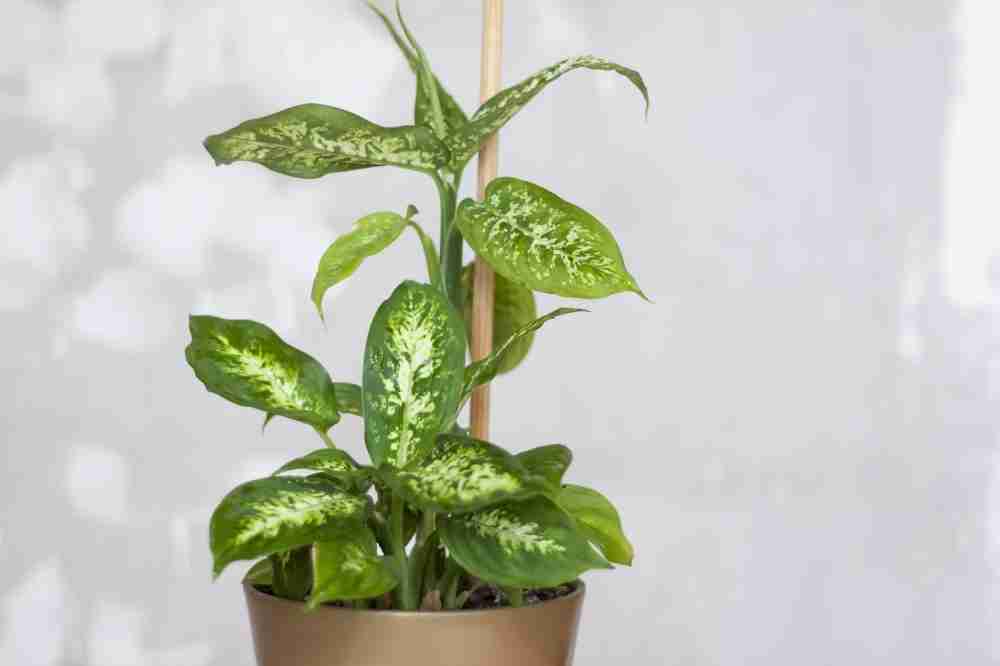 There is no shortage of Dieffenbachia varieties for houseplant lovers to choose from. Most of the varieties in existence are actually variegated cultivars, which have been bred to highlight different leaf colors and patterns.

Here are some of the most popular variegations and what they look like!

This cultivar has wide leaves that are almost entirely yellow. The leaves have a distinctive dark green border around the edges which helps their color pop!

This cultivar is also characterized by a large white main vein that travels down the middle of each leaf.

This cultivar can grow up to 6 feet (2 m) tall, making it one of the larger Dieffenbachia varieties. The name ‘Snow’ comes from the light silver speckled pattern that dots its mostly dark green leaves.

If you love creamy variegations, this is the plant for you. Dieffenbachia ‘Mary’ is characterized by mostly cream-colored leaves, with minimal splotches of dark and light green.

Its leaves grow larger than a typical Dieffenbachia, making this cultivar a showy variety.

This cultivar is best known for its bushy or ‘compact’ growth habits. It’s the perfect plant to fill a space and has a very wild look to it!

The Dieffenbachia compacta leaves are a light to medium green color, with creamy white speckles near the main vein.

Due to the high amount of leaves in this compact cultivar, it’s also been touted as an excellent air purifier!

Should I Cut the Flowers Off My Dieffenbachia?

Dieffenbachia produces a white spadix, which is a grouping of flowers. Some cultivars produce a flower with no smell, whereas others can give off a musky smell that some find unpleasant.

Although these blooms are a mainstay of Dieffenbachia, most plant lovers buy this plant for the foliage, not the flowers. If you want to direct the plant’s energy toward producing more foliage, you can snip the flowers from your Dieffenbachia plant.

Use clean, sterilized pruning shears or scissors and snip the shoot as close to the base of the plant as possible. You should also use gloves to protect your hands from the sap, which contains calcium oxalate crystals.

If you prefer to leave the flowers on, they will naturally turn brown and die, after which you can cut them.

Hopefully, this guide helps clear up any confusion between these two very similar plants. Luckily, these tropical plants have similar care requirements, so there’s little danger in confusing the two.

If you’re unsure whether you have Dieffenbachia or Aglaonema, first look at the leaf shape. Aglaonema has narrow leaves, and Dieffenbachia has short, wide leaves. In addition, if your plant has silver or pink coloration, it’s more likely to be Aglaonema.

The growth habits of these two plants are also different, as Dieffenbachia grows tall and upright, while Aglaonema grows short and bushy. Aglaonema leaves also have only five to eight veins, whereas Dieffenbachia leaves have between 20 to 30 veins.