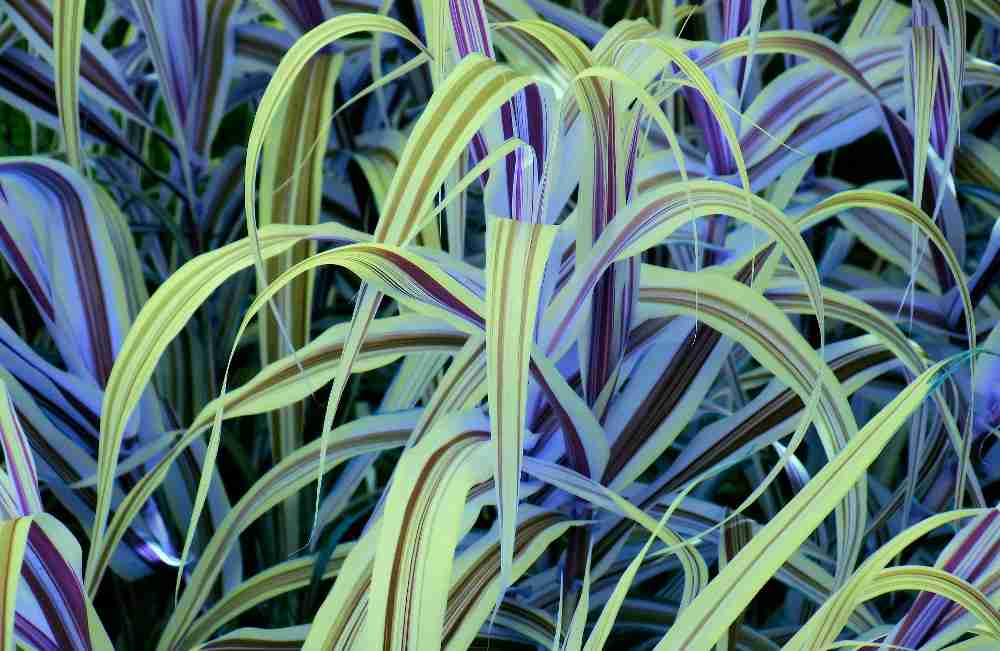 Spider Plant (Chlorophytum comosum) is an easy-to-grow houseplant and a popular choice for beginner gardeners. Its long arching leaves make it an excellent fit for hanging planters. There are dozens of variegated varieties of Spider Plant, all with different color variations and leaf shapes.

Although you may see photos floating around the internet that appear to be an elusive purple Spider Plant, this variegation does not exist!

We’ll take a closer look at these two plants and see where this mix-up stems from!

Moses in the Cradle (Tradescantia spathacea)

Tradescantia spathacea is a close relative to the inch plant (Tradescantia zebrina). It’s best known for its deep green pointed leaves and bright purple underside. These lance-shaped leaves are similar in shape to a Spider Plant, which is why many mistakenly call it a purple Spider Plant.

Tradescantia spathacea has many similar qualities to the Spider Plant. It’s a low-maintenance plant that can survive in all light conditions, from full sun to shade. Like a Spider Plant, it produces small white flowers when it blooms.

Tradescantia spathacea can be grown indoors as a potted houseplant or outdoors as ground cover in USDA zones 9-11. So, if you like the look of a Spider Plant but want more color, this is a great substitution. 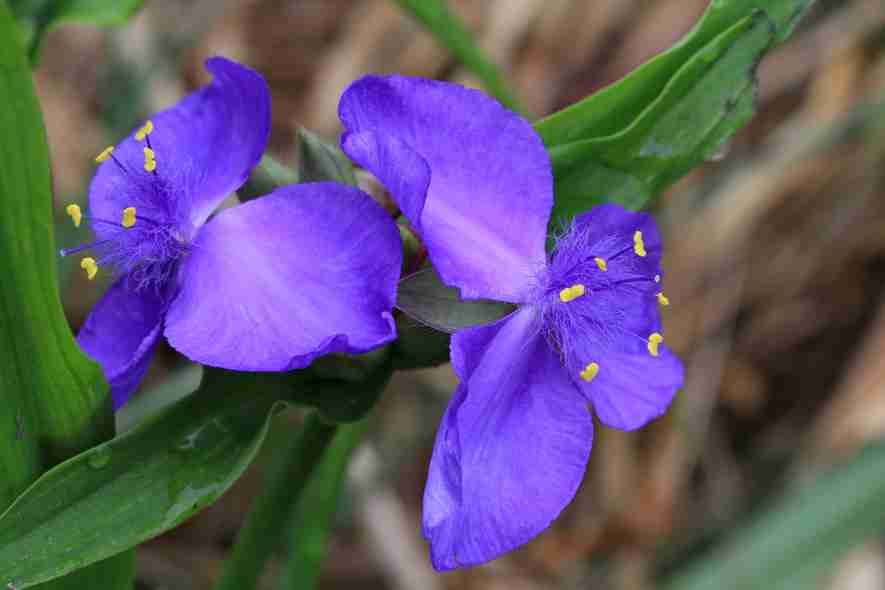 But Tradescantia zebrina is not the only purple variety of Spiderwort out there. Tradescantia virginiana (also known as Virginia Spiderwort) closely resembles the Spider Plant due to its long lance-shaped leaves. It produces rich violet-colored flowers, which is why some refer to it as a purple Spider Plant.

How Many Varieties of Spider Plants Are There?

There are over 200 known varieties of Chlorophytum or Spider Plants. Chlorophytum comosum is the name of the houseplant we know and love. But other species in this genus look and grow pretty differently. Chlorophytum tuberosum is commonly grown outdoors in India, where its bulbs and leaves are ground into flour for cooking.

What Is a Variegated Spider Plant?

Variegation is a variation of color on a plant’s foliage. In some plants, variegation takes the form of stripes or spots. This color change occurs due to a lack of chlorophyll in the leaf.

Variegation is most commonly caused by a cell mutation. If the variegation is genetic, the plant can be propagated, and the offspring will have the same variegation as the parent plant. Some variegated varieties of plants are extremely rare, and plant lovers pay high sums just for the ability to own them!

Variegated Spider Plants usually have cream-colored stripes that travel vertically up and down the leaves. The placement and size of the stripes on the leaf depend on the species.

Spider Plants are one of the most popular houseplants today. No varieties are particularly rare, so to say, but some can be harder to get your hands on than others.

What Does It Mean When a Spider Plant Flowers? 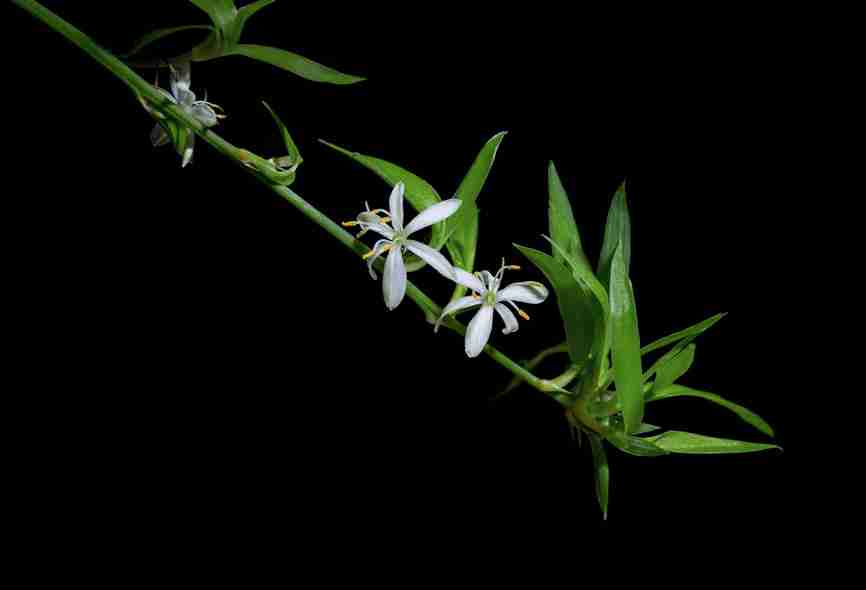 When Spider Plants reach maturity, they can produce flowers. These flowers appear on long stems that grow from the center of the plant.

But Spider Plants will only flower when conditions are ideal. They need the correct amount of light, water, and the right temperature before they’re happy enough to blossom. They also prefer to flower in the fall, so you may notice blossoms growing after a few weeks of shady weather.

Spider Plants tend to produce flowers when they’re pot-bound due to nutrient stress. Pot-bound Spider Plants aren’t necessarily bad, but if roots are growing out of the drainage holes, you should consider repotting your plant.

Should I Cut the Babies Off My Spider Plant?

When Spider Plants blossom, they also produce plantlets that some gardeners call babies. You can leave these plantlets hanging between the leaves to give your Spider Plant a more untamed look. Keep in mind that you will need to increase the amount of fertilizer you give to the mother plant since these plantlets take up a lot of energy.

Is a Spider Plant a Dracaena?

Spider Plant is of the genus Chlorophytum, whereas Dracaena is its own genus. Although they are both in the family Asparagaceae, they are two separate genera, and therefore a Spider Plant is not a Dracaena.

The confusion stems from the fact that Spider Plant is sometimes called a ‘ribbon plant.’ The Dracaena species Dracaena sanderiana is also sometimes called the ribbon plant. Even if they share a common name, one look at these two plants, and the differences are obvious. Dracaena sanderiana is a bamboo-like plant native to Africa. Spider Plant, on the other hand, is a tropical flowering perennial.

Why is My Spider Plant Turning Gray?

If your Spider Plant is looking limp and colorless, the culprit is most likely drought. Although Spider Plants are pretty drought-tolerant, if they receive too little water, their bright green leaves turn pale and eventually shrivel up.

Overly dry soil can become compact and difficult to rehydrate. In this case, the best way to give your Spider Plant a thorough drink is to soak it. Fill a sink or basin with 3-4 inches (7-10 cm) of water and place the pot inside. Let the soil rehydrate for about 45 minutes, then allow the excess water to drain.

There are, unfortunately, no purple Snake Plant cultivars in existence. However, there are similar plants that have naturally occurring purple pigmentation.

Tradescantia spathacea has arching leaves which are similar to a Snake Plant. Its deep green and purple foliage makes it an excellent option for Spider Plant lovers looking for more variation.

Spiderwort is a hanging plant like the Snake Plant, whose purple leaves look beautiful trailing down the sides of a pot. And, of course, there are dozens of Spider Plant variegations to explore that can give more variety to your collection.