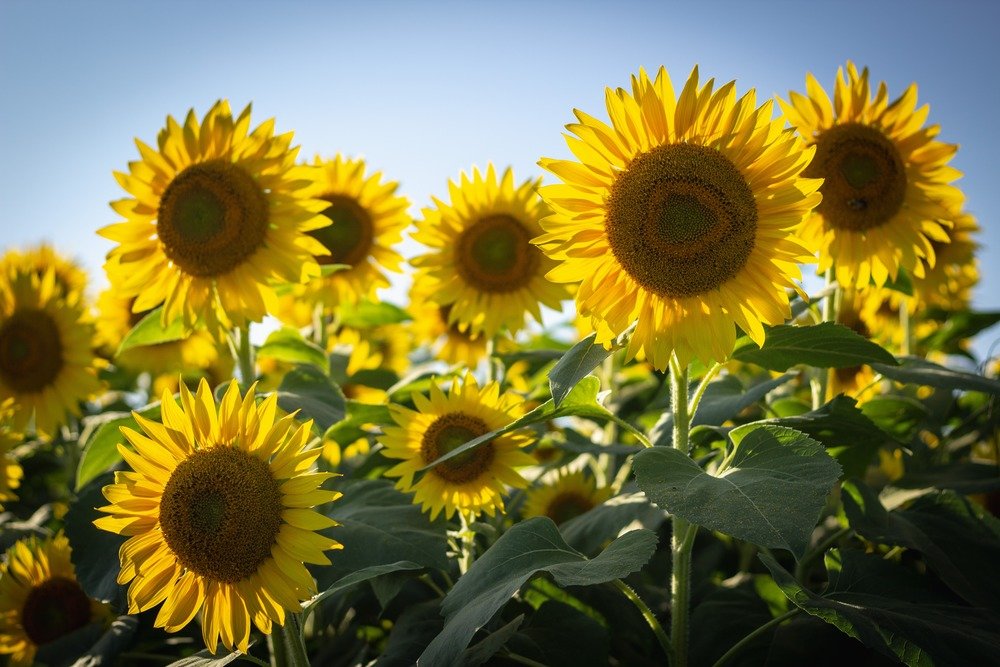 Sunflowers are gorgeous flowers well-loved throughout the world. They are tied closely to sunlight as they follow the sun throughout the day and even look like the sun, bringing brightness to everyone. They are also edible. Sunflower oil and seeds can be used in cooking or even as a snack.

Although these plants are well-loved, not many people know a lot about these flowers. For example, many people wonder what Sunflowers do at night.

At night, Sunflowers don’t bloom, close up or droop but younger Sunflowers often turn to face east towards the rising sun, so they are ready for the morning.

Additionally, mature flowers have been found not even to move at all. They rarely follow the sun and tend to face east instead solely. There are plenty of other facts about Sunflowers, including where they are native to and how they spread throughout the world.

What Happens to Sunflowers in the Night?

Sunflowers are known for tracking the sun, so what do they do when it isn’t sunny? Sunflowers have been found to turn east once the sun goes down. This allows them to prepare for the morning when the sun rises from the east.

They may wilt, droop, or close up a little, but it isn’t usually very noticeable.

As Sunflowers grow and mature, they don’t follow the sun as easily. When that happens, most of them also tend to stay facing east. This is usually due to their heads getting heavy from the seeds produced. They will eventually start to droop when their stems can no longer support all the seeds.

Unfortunately, Sunflowers are annual plants, so they only last a year. New ones have to be grown every year.

Do Sunflowers Close at Night?

Due to their name and tendency to face the sun, many people believe Sunflowers change their behaviors at night. One of those behaviors is closing. Sunflowers do not have the ability to close. While they may potentially wilt or close a little, they cannot close up fully at night very easily as some other plants can.

If a Sunflower does close up entirely, it is usually something more serious, like chronically not getting enough sunlight. However, not having sunlight at night isn’t enough to cause them to close up.

Do Sunflowers Look Down at Night? 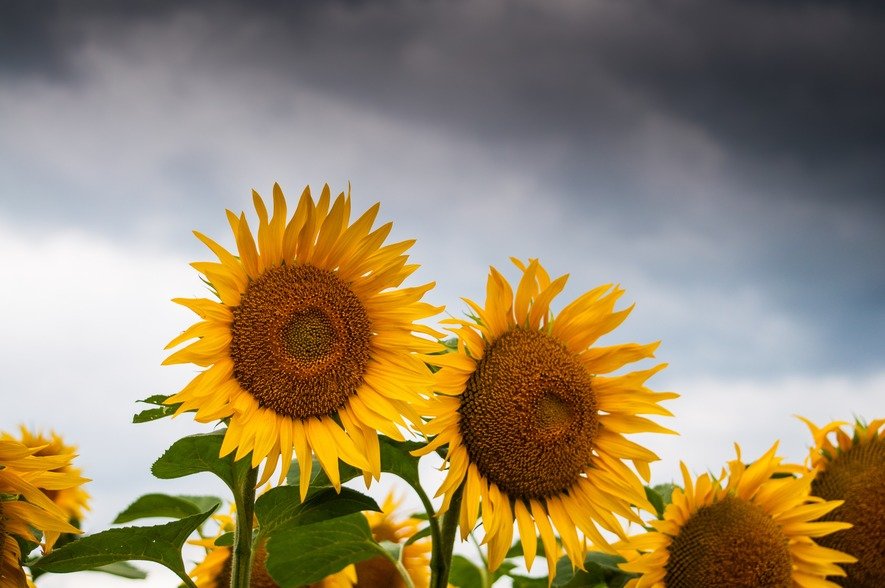 This is an excellent time to do it as well, as it is easier to harvest seeds that are facing downward, especially in taller sunflower varieties.

So if your Sunflower looks down, it is usually a sign that your plant has a damaged stem or it is time to harvest the seeds.

Do Sunflowers Only Open In The Sun?

Sunflowers do not only open in the sun. They shouldn’t close up unless something is wrong with the plant. Instead, they should stay open throughout the night, with minimal drooping or wilting until the sun returns.

Even Sunflowers always following the sun is a myth as well. While young ones follow the sun, going from east to west during the day and then turning back east at night, they do not do this as they age.

As growth slows down and the plant is focused on producing Sunflower seeds, so does its movement. They start to grow too stiff to rotate and will turn, so they only face east once they start to hit maturity. Additionally, as the Sunflower seeds get ready, the plant will start to droop.

Weirdly enough, research was done on the plants. What was found was that Sunflowers weren’t turning to face the sun. What was happening was the parts of the stems were growing unevenly throughout the day.

During the day, the west sides of the stems wouldn’t grow but they would at night. The east side of the stems grew throughout the day but slowed down at night. This causes the flowers to rotate from east to west slowly and then back again throughout a 24-hour cycle.

This was found to be done to allow for more leaf production and biomass on all parts of the plant. This also explains why the flowers stop moving when they hit maturity. Since their stems are no longer growing, the stems’ unevenness isn’t causing them to rotate from east to west and back again.

What Month Do Sunflowers Bloom?

Sunflowers bloom for several months. Usually, they start to bloom sometime in July and can go as late as the end of October or November. It is generally during the summer and autumn, and they will continue to grow until the first frost hits.

This may mean you only get your Sunflowers in some areas until August.

Most people find that their Sunflowers bloom for an average of twenty days. If it is nice out and the plants have plenty of nutrients, they can sometimes last longer.

Once they are done blooming, the petals will often fall off, and the Sunflower will begin to droop until they are facing the ground. When that happens, that’s usually a sign that the Sunflower seeds are ready to harvest.

What Are Five Facts About Sunflowers?

The Heads Are Usable

One unknown but potentially beneficial fact about Sunflowers is that their heads can be used as scrubbing pads. If you harvest the seeds so that the heads are still mostly intact, you can use the head as a cleaning tool for your dishes.

In addition to scrubbies, they can be used for dye, oil, medicine, and food.

Sunflowers Have Traveled to Space 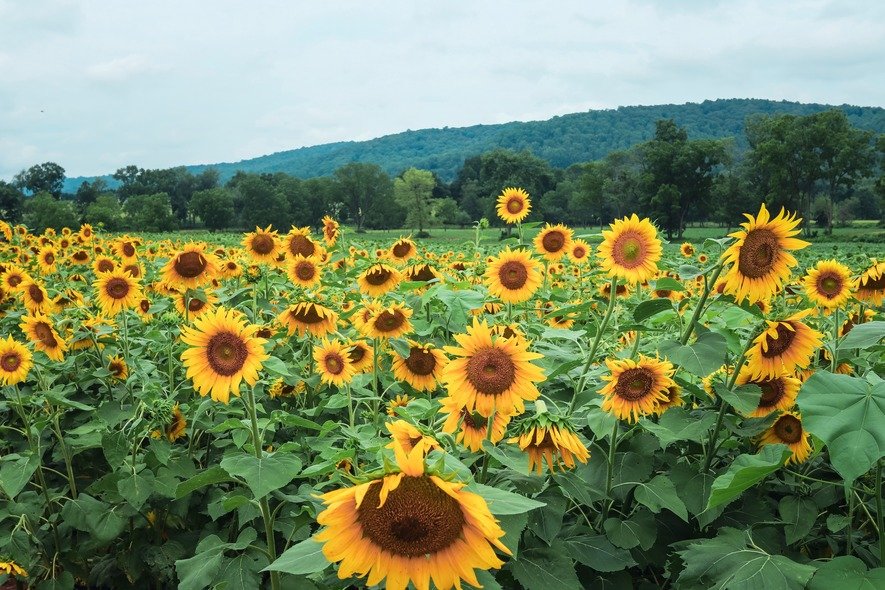 When going to the International Space Station in 2012, Don Pettit brought several Sunflower seeds. While traveling, he planted the seeds and regularly stayed in contact via a blog with updates about his Sunflowers.

He also had other plants, like Broccoli and Zucchini.

Native Americans used to use Sunflowers to reduce chest pains. Many tribes used them, healing anything from chest pain to kidney diseases. While Sunflower seeds are high in vitamin E, the flowers have also long been used.

Sunflowers Are Native to the United States

Sunflowers were initially found in the prairie areas of the United States, such as Kansas, Eastern Colorado, Nebraska, and more. They are the state flower for Kansas. They have been found as far back in the United States as 3000 BCE.

Sunflowers Are Well-Loved Throughout the World

It isn’t just that these flowers are popular in America. They were picked up by Spanish Conquistadors and spread throughout the world around the 1500s. They were even brought into Russia by royalty.

Their popularity has rarely faded, either. They hit bursts of popularity in the 19th century, but they have been well-loved throughout history.

What Do Sunflowers Symbolize?

Sunflowers are considered to represent constant and prolonged loyalty and consistency. This is because they always turn to follow the sun and wait for it to return during the night.

Sunflowers are amazing plants that can brighten anyone’s day. They stand for loyalty and consistency but have many other purposes. They have been used throughout history as food, dye, and much more.

Sunflowers tend not to bloom, close up, or droop specifically during the night, though younger sunflowers often turn to face east and the rising sun, so they are ready for the coming morning.

These flowers are so bright and stunning that people worldwide have fallen in love with them. Despite this love, not many people know what Sunflowers do at night. They return to their original eastern-facing direction until the sun rises. Recent studies have shown that this is due to the growth of the flower stems more than sunlight.