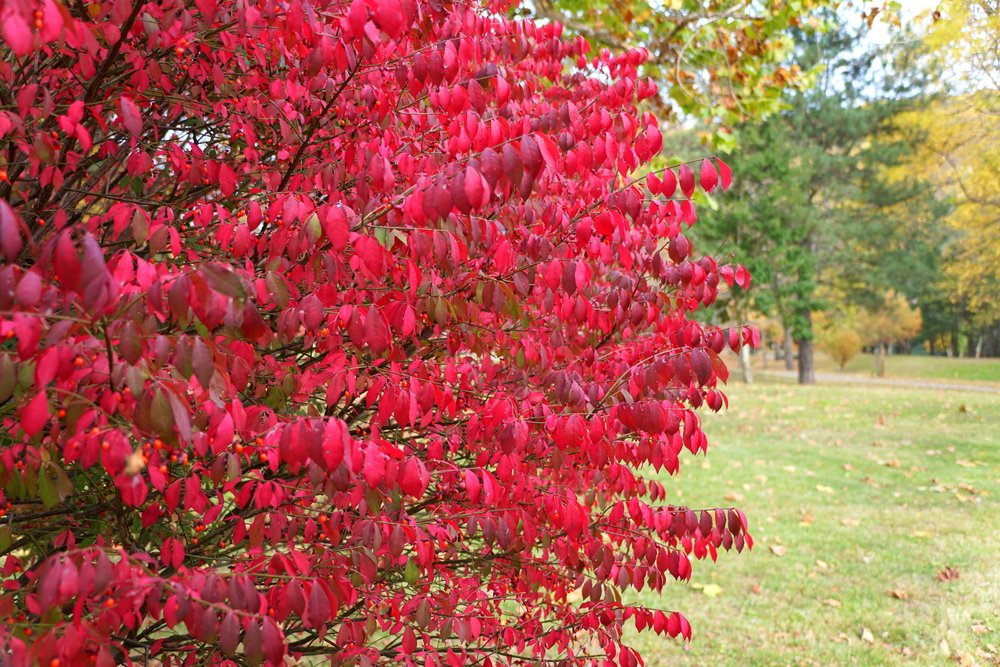 Fortunately for those who like this shrub, you will not have any problems with the root of this plant. The Burning Bush root system is not deep; it’s shallow and dense and does not penetrate deeply into the ground. This allows it to be relocated much quicker than other shrub species of similar sizes.

However, it should be noted that the species has been declared invasive in 21 countries across the United Nations. The reason is that it competes with many native species due to its easy reproduction through seeds that birds eat and spread around.

Due to the high demand for Burning Bush on the market, several varieties of this plant have developed that differ in size and appearance. Scientists have also developed a new variety of this species that has sterile seeds, so it does not pose a danger to your garden or the environment.

How to Identify a Burning Bush? 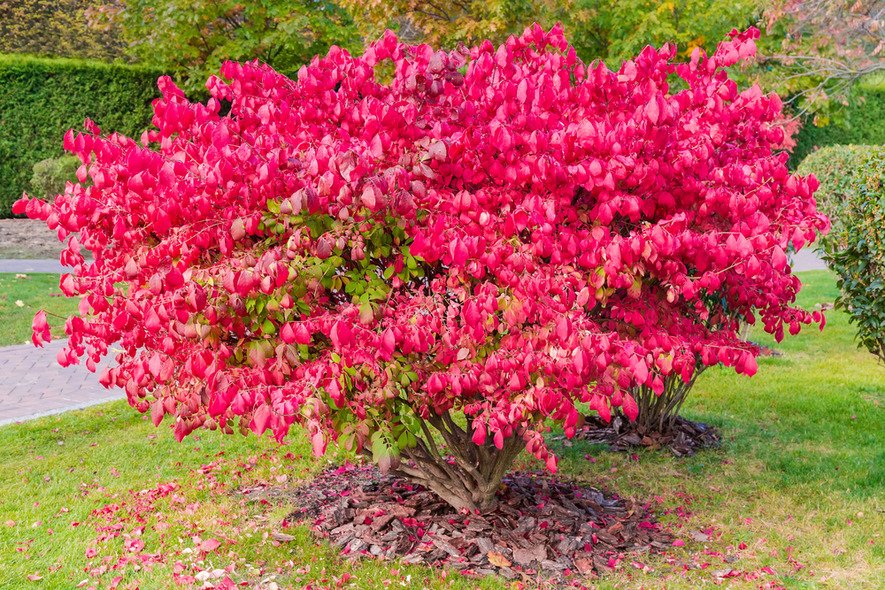 Burning Bush is characterized by its red fall foliage, which persists even after other species have lost theirs, making it very easy to identify in the fall. The Burning Bush’s botanical name is Euonymus Alatus.

In fact, the plant is native to countries like Northeast Asia, Japan, and Central China. It is found throughout the world because of its beauty, although it isn’t native to the U.S. as many people think.

Burning Bush leaves are mainly dark green, elliptic, and oppositely arranged. During autumn, the leaves turn dark red. The bush produces greenish flowers in the summer that turn into purple berries in the fall.

Does Burning Bush Have Deep Roots?

Burning Bush roots do not penetrate deeply into the ground and are easily established during planting. The roots are compact, thick, and have many small veins. The plant roots are shallow, so you can relocate it easily, making it a great choice for gardeners who like to change up their layouts every so often.

Due to their prolific seeding and dominance, this exceptionally decorative ornamental shrub and all its cultivars are seen as a threat to natural areas. Winged Burning Bush seeds are dispersed by birds, thrive in shaded environments, and spread gradually throughout areas in the U.S., and thus, threaten diversity and productivity of native habitats.

By layering their branches in contact with the soil and roots, Winged Burning Bush plants can increase in density in addition to producing seeds.

Controlling plants that produce seeds is a high priority when dealing with an invasive plant. The first step in controlling the plant population is reducing the production and spread of seeds.

Chemicals or herbicides are the best way to get rid of the Burning Bush. This is the only way you can only ensure that the entire bush is destroyed, without leaving anything behind that could grow into another bush.

The two options mentioned below are the most effective. Other options are also available, but they are more toxic and can be dangerous if you don’t have the experience necessary to carry out this task.

Glyphosate: is a popular chemical for getting rid of annuals, perennials, broadleaf plants, and woody weeds. It can also be used to kill the Burning Bush completely.

Triclopyr: in addition to being non-toxic to birds and animals, this chemical can also be applied to woody plants and weeds. Additionally, it is effective against Burning Bushes. 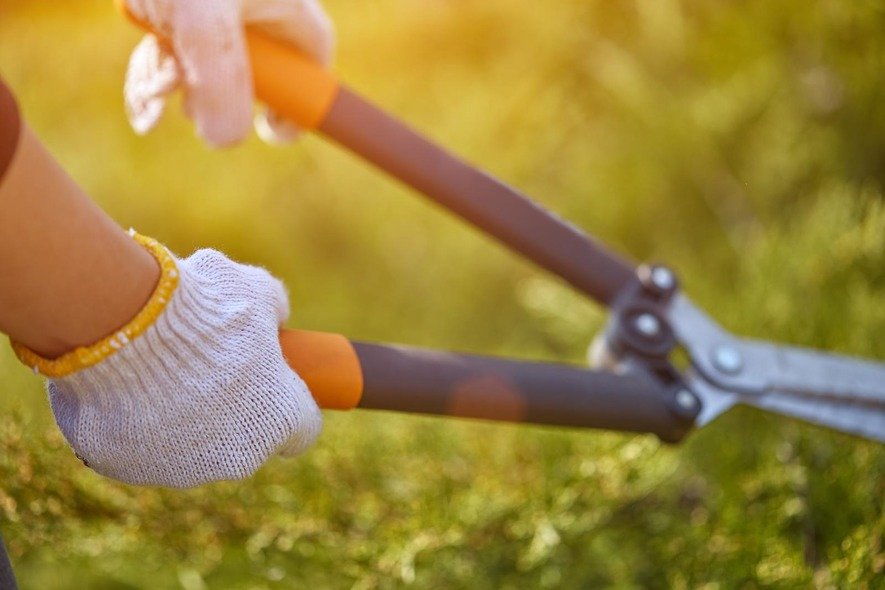 Cutting Burning Bushes can be done effectively using chainsaws, brush saws, or other cutting tools. To prevent regrowth, cut the stems near the ground and treat the stumps with herbicide.

Pulling small Burning Bushes is a viable control technique for small infestations. Pulled Burning Bushes shouldn’t be left lying on the ground, because they can re-root from the stems or roots still touching the ground.

Other mechanical techniques, such as cutting and grinding, that leave the root system in place will typically result in re-sprouting unless herbicides are used to kill the roots.

Can I Safely Relocate a Burning Bush?

The root system of a Burning Bush is dense and not deep, making it easier to relocate than some other popular landscape shrubs that grow thick deep roots after they’ve been in the ground for more than three years, such as Junipers.

When moving established trees and shrubs, preparation should begin the season before the move. The roots should be pruned and some even removed, allowing others to grow, but not to a great extent before the plant is moved. This is called root pruning.

Using a shovel, dig around the plant and go below the surface of the soil. By doing so, you trim back the roots, encourage new growth, and create a solid root ball.

You will need to dig a hole twice as wide and twice as deep as the existing root ball, then carefully dig down and remove the root ball and bush from the original location.

Prune away any broken or long roots before planting the shrub in its new location.

Firm up the new soil around the plant and water it thoroughly right away. If it doesn’t rain, water it every five days.

When Should I Dig Up My Burning Bush? 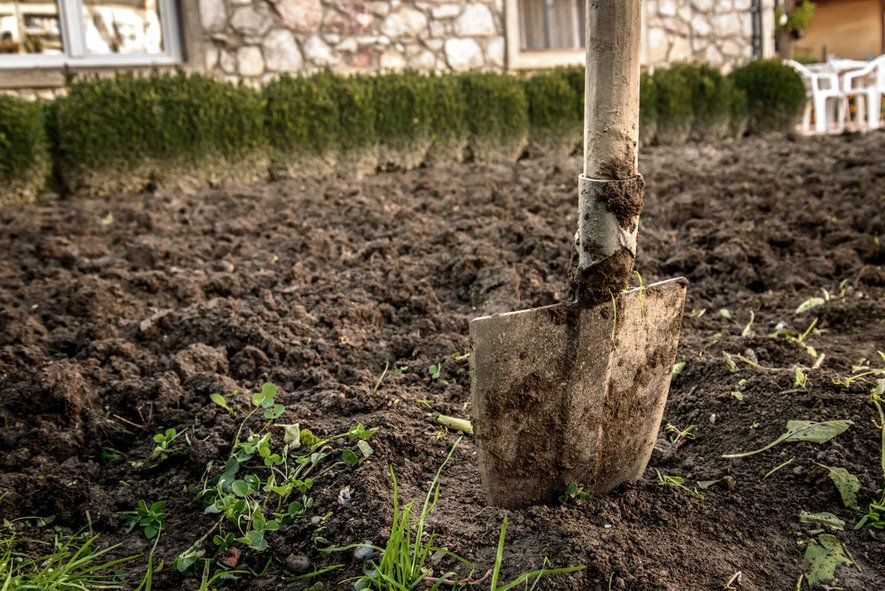 If you are considering relocating your Burning Bush, it is best to do it in the late fall or early winter (late October to early December). This is because the plant is dormant during this time and will have less of an impact on its new surroundings.

Additionally, this will minimize stress on the plant and give it a better chance of surviving the move. The roots of the plant are less likely to be damaged during relocation if they are not actively growing.

What’s the Best Place to Plant a Burning Bush?

Ideally, you should select a planting spot that gets full sunlight to partial shade. Get rid of all weeds, grass, and debris. Dig a hole twice as wide and twice as deep as the root ball.

Planting Burning Bushes near wooded areas is not recommended, as they are invasive foreign plants that will grow rapidly. Keep them under control by planting them near your house or in a separate area of your yard. It grows best in well-drained soil and in a sunny location, but in heavily shaded areas, it will still produce a good fall color.

How Far From the House Should You Plant a Burning Bush?

Burning Bushes should be planted at least 10-15 ft (3-4.5 m) away from your house. This will ensure that the roots don’t damage your foundation and that the shrub doesn’t block windows or doors. It’s also a good idea to leave some space between Burning Bushes and other plants, as they can be quite invasive.

So, is a Burning Bush a good or a bad choice for your garden? With its flaming-red foliage and shallow root system, it can be easily transplanted to any suitable location, making it a center-piece of your backyard. You can easily control Burning Bush in your own yard by pulling out seedlings and sprouts by hand.

However, it’s important to note that this striking bush has been proven to be invasive as birds carry the seeds into natural areas making it possible for the plant to spread out of control.

There are some great alternatives to Burning Bushes, but if you choose to grow this particular species, make sure to collect all the seeds and take appropriate measures to stop the inevitable spreading.