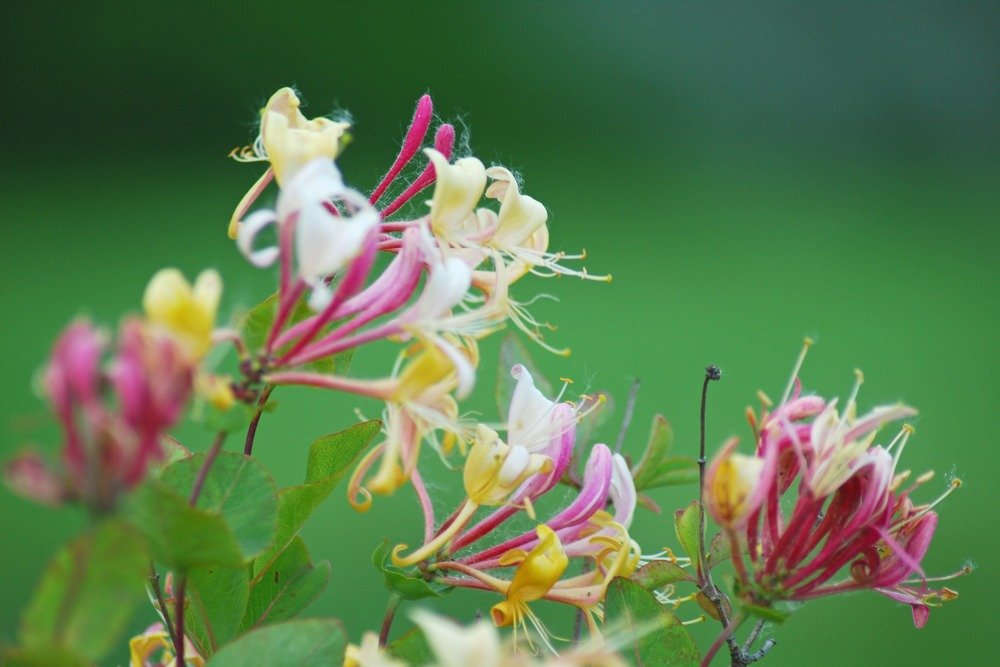 Honeysuckles are beautiful ornamental climbers and shrubs with fragrant flowers that attract pollinators, making them a great addition to your garden. That’s why it can be very concerning if you notice that the stems have suddenly become woody, tangled, or distressed.

Honeysuckles will develop woody stems due to aging, pest problems, or improper pruning. In most cases, proper care and pruning will help fix your woody Honeysuckle, but it may need additional care if it has a pest or a disease.

To best care for a woody Honeysuckle, you should investigate why the stems may be turning woody, so you can effectively treat your plant and prevent it from becoming woody in the future.

Does Honeysuckle Get Woody?

Why Do Honeysuckles Get Woody?

There are a few common reasons why your Honeysuckle has gotten woody, ranging from natural aging of the stem to pests or pruning problems.

Developing woody stems is a natural part of the Honeysuckle’s life cycle and progression. The stems on your Honeysuckle may become woody over time; in this case, there isn’t much you can do to prevent it. This may happen after a couple of years, so if your Honeysuckle is relatively new, there will be other causes for the woody stems. 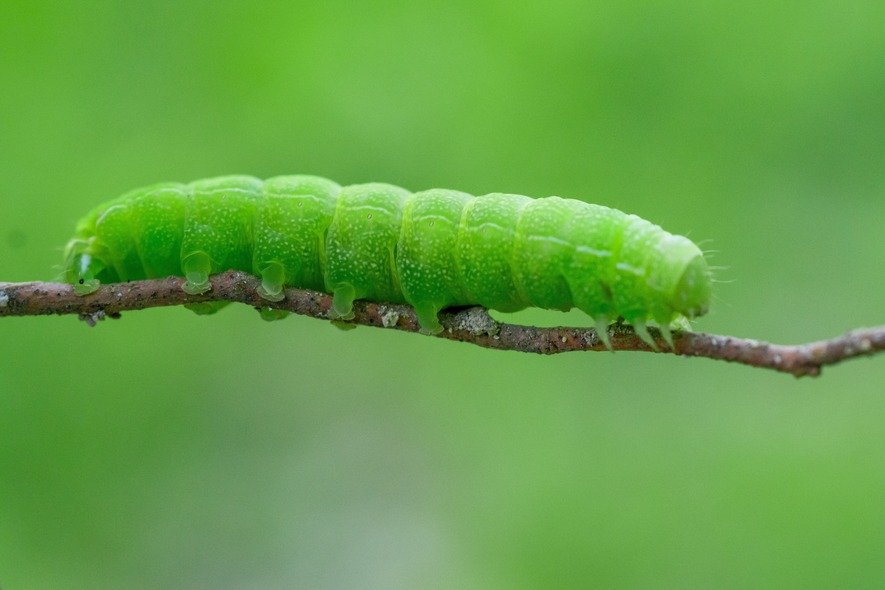 While the magnificent and fragrant Honeysuckle flowers attract wildlife like hummingbirds and butterflies, they can also draw a host of garden pests like aphids, scale, and even caterpillars.

One of the most common types of pests that you will find on your Honeysuckle is the aphid. While they are very tiny and difficult to spot with the naked eye, they leave a signature honeydew substance on the stems and leaves, which they secrete after consuming the flesh of the plant.

In addition to your Honeysuckle developing woody stems, the plant will show other symptoms of unhappiness, such as drooping or curling leaves, yellowing leaves, or leaves dropping altogether. If you suspect your Honeysuckle is turning woody due to a pest problem, you will have to act quickly to treat it to save your plant. Here are a few pest treatment methods that are most effective for saving your Honeysuckle:

While powdery mildew (a disease caused by fungi) is not typically a reason for your Honeysuckle to get woody stems, severe cases can completely stress out a plant, so while improbable, it certainly is a possibility.

You can easily identify powdery mildew by small, pale spots forming on the leaf surface, along with the undersides of the leaves. These spots will appear powdery, hence the nickname.

How to Treat Powdery Mildew?

If you notice that your Honeysuckle has powdery mildew, remove any fallen leaves and discard them, as fungal spores will still be present on the leaf even after it falls.

Prune any severely damaged leaves, stems, or flowers, and then treat your Honeysuckle with a fungicide solution. A great way to prevent powdery mildew is to plant your Honeysuckle in a location with sufficient airflow to prevent the spores from forming on the leaves and stems.

If your Honeysuckle has grown quite tall or prolifically, it can occasionally get in its own way and cast a shadow on the stems, causing them to turn woody.

How to Prune Honeysuckle

How Do You Revive Honeysuckle?

Can You Cut Honeysuckle Back to the Ground?

Ideally, you will want to leave at least 1 foot (30 cm) of your Honeysuckle above ground, even when pruning aggressively to amend woody stems. You might get away with pruning back a little more, but it may reduce the chance of success and delay flower production even longer.

Do You Cut Back Honeysuckle in the Fall? 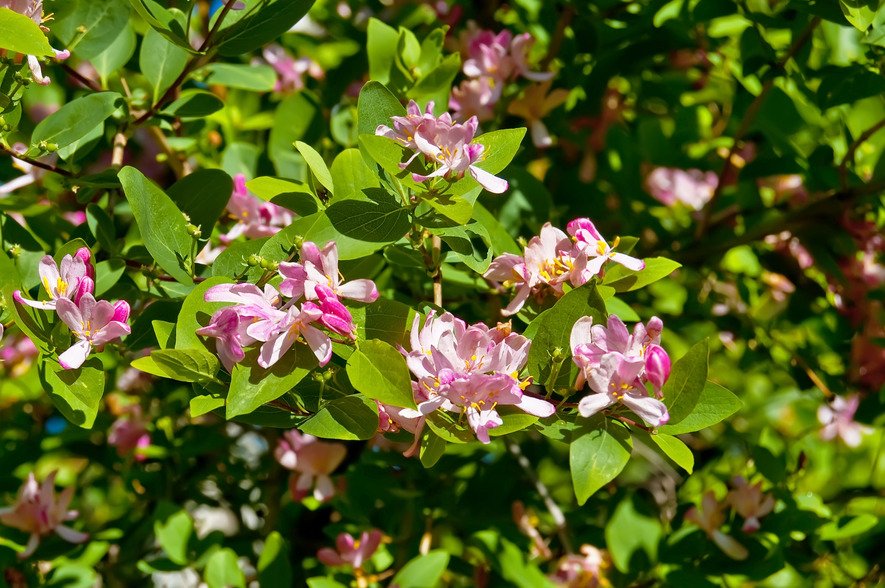 If you are pruning your Honeysuckle aggressively, it’s best to wait until the winter months. This is when your Honeysuckle plant is dormant, which will help increase the likelihood of success.

It is, however, better to maintain your Honeysuckle by pruning throughout the year, to prevent it from arriving in such a state that you will want to cut it back completely.

In addition to pruning, proper care is the best way to encourage strong growth for your Honeysuckle. The healthier your Honeysuckles are, the more resilient they will be to pests, disease, or other problems which may cause the stems to go woody.

Honeysuckle will tolerate temperatures between 55°F and 85°F (12°C and 29°C). They are perennials and will go dormant during winter and return in the spring with warmer temperatures.

Honeysuckles love moist, well-draining soil to encourage healthy root growth and prevent rot. Adding mulch to the top of the soil is a great way to help lock in the existing moisture, particularly during the summer months when the heat is rising. They are a partial shade plant, so when planting them in the ground, ensure they are not getting too much sunlight which may damage the blooms.

Certain types of Honeysuckle are better adapted to growing in pots or containers. Most would prefer to be planted directly into the ground, but it is possible to grow happy and thriving Honeysuckles in containers. These varieties include:

Planting and Soil for Potted Honeysuckles

Planting in containers can be an excellent option for those with poor soil quality or those who need more land to grow Honeysuckles directly in the ground. Choose a very large pot and plant your Honeysuckle in the spring for the best results. Ensure you have a rich soil base, including plenty of compost and well-draining soil. Make sure that your pot has a drainage hole to prevent root rot.

Potted Honeysuckles will need more regular watering than they would if planted directly into the ground. Adding mulch is excellent for root protection and locking in moisture to ensure your Honeysuckle does not dry out too fast. Partial shade is best for Honeysuckle varieties, and you may consider placing your potted Honeysuckle in a location where it may climb if desired.

Naturally, Honeysuckles grown in pots are not immune to pests or problems resulting from a lack of pruning. So if you notice that your Honeysuckle has gone woody in its container, make sure to tend to the problem immediately as you would if you planted your Honeysuckle directly in the ground.

A woody Honeysuckle may cause some worry and concern as it can get in the way of enjoying your otherwise beautiful ornamental plant. To effectively treat and care for your woody Honeysuckle, you must first determine the cause of the woody stems.

Honeysuckles will develop woody stems due to aging, pest problems, or improper pruning. To treat pest problems, spray your plant with water, use neem oil, or use a fungicide for powdery mildew. Be sure to prune regularly so your plant has even sunlight to continue growing.

Once you determine the reason for the woody stems, the better you will be able to care for your Honeysuckle. Ultimately the goal is to prevent the woody stems from returning so you can continue to enjoy your beautiful plant.