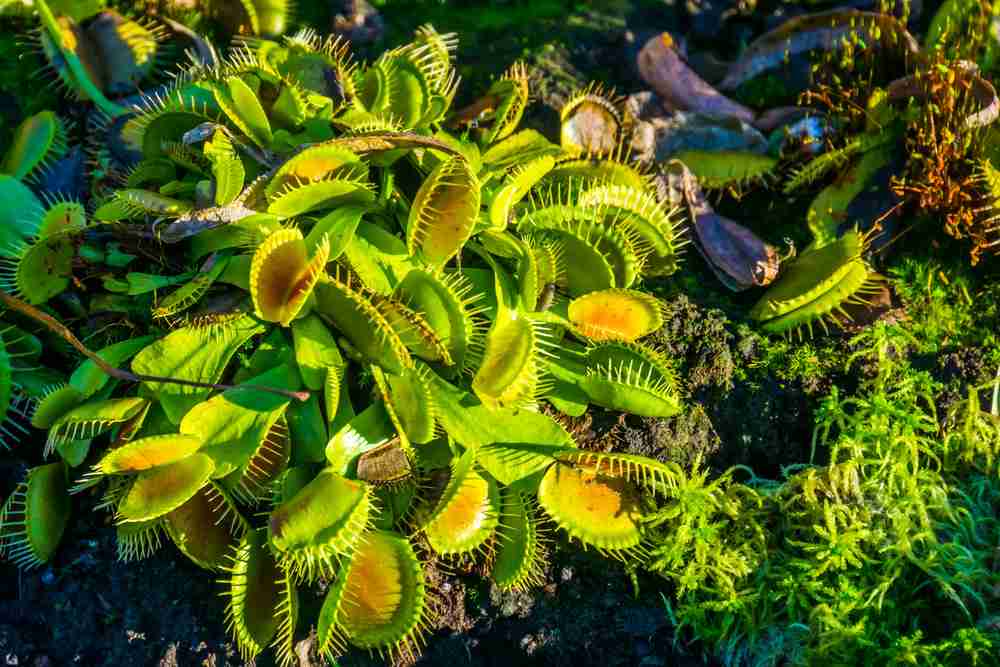 Venus Flytraps are carnivorous plants that are found on the east coast of the United States. They are similar to pitcher plants and sundews in that when they weren’t getting enough nutrients from the soil, they adapted to get nutrients from insects.

As the name suggests, Venus Flytraps get insects, like flies, to land in their bulbs, shaped like mouths. When an insect brushes small trigger hairs, they close their mouths and wait for the unfortunate critter to break down.

Typically, these plants smell pleasant, like fruit or flowers. This is because sweet smells can attract insects, especially pollinators. However, these smells can be sickeningly sweet for some. Additionally, if one of the bulbs is rotting or the insect is taking a long time to break down, it may start to smell like rot.

To get rid of Venus Flytrap smell, you can feed your Flytrap small insects like ants or if you notice any bulbs are rotting, trim them and throw them away. This will help to get rid of the smell.

Younger plants usually have very little smell, attracting mainly insects like ants. As the plants grow more mature, they may add more smells into their spectrum to gather bigger insects, like big flying insects. Still, these smells are usually sweet and sugary.

If they do have an unpleasant smell, it is usually because the insect is taking a long time to decompose. Additionally, some people give their carnivorous plants things like raw meat. This takes a very long time for the plants to break down, and they can smell bad during this time.

If the plant starts to die, it can also give off a rotting smell, but these are the only two times the smell shouldn’t be abundantly sweet and minty. And, of course, not every plant smells the same, whether carnivorous or not. Some have been described as smelling like lavender, while others just smell sweet.

Not everyone has the same reactions to smells either, and some plants that smell good to some may be too strong or unpleasant to others, so it is important to take this into account as well.

Do Venus Flytraps Give off a Scent? 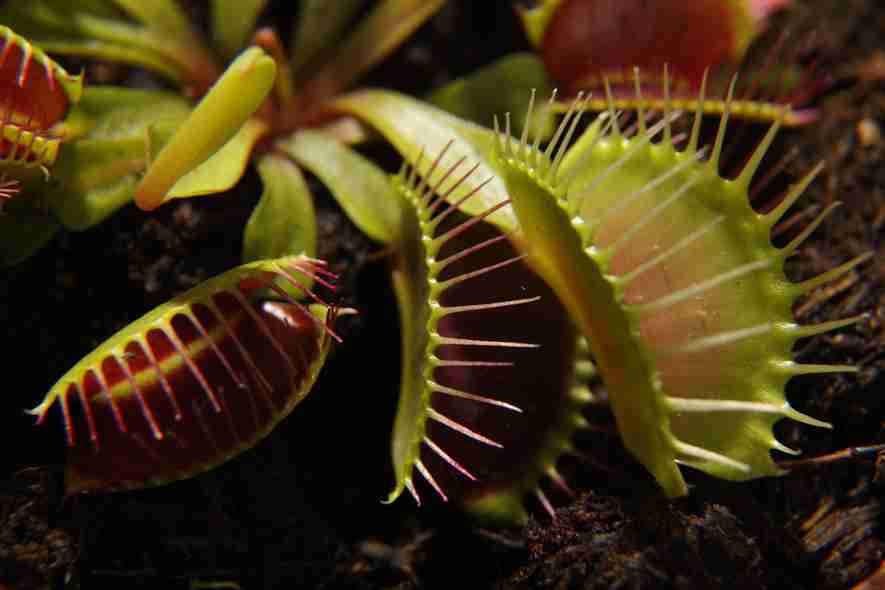 Venus Flytraps are carnivorous plants. But do they give off a scent? Since their main goal is to attract flying insects that come to inspect for any signs of sweet nectar, they do have a smell. This smell is often compared to a bouquet of fruits and flowers.

For bigger Venus Flytraps, some people may find this smell very strong and unpleasant, but smaller ones generally just have a faint fruity and floral smell. Usually, the smell will never fill an entire room.

If your Venus Flytrap starts to smell bad, the most likely cause is due to something rotting. Usually, the most common causes are bulbs, heads dying, or something in the soil rotting. If you have given your Venus Flytrap an insect and it is taking more than five days to open up again, it is also likely that it is the decomposing insect that smells.

Some people choose to feed their Flytraps with something besides insects, like worms or raw meat. Since this isn’t part of your Flytrap’s normal diet, it may be taking the plant a long time to break apart, causing it to rot and release a bad smell in the meantime.

Why Do Flytraps Smell So Bad?

Venus Flytraps should not smell bad. If they are constantly smelling bad, you just may have an aversion to the smells they release. Also, the smells may just be too strong. This is similar to a candle that may smell good initially but quickly grow to be unpleasant due to its strong smell.

Most Venus Flytraps do not release a strong smell, but some of them can be quite powerful. When this is the case, you can usually just put them in a bigger room, so the smell isn’t so concentrated.

If that doesn’t help, then it is likely that you just have an aversion to the smell. When that is the case, it is probably just best to avoid owning a Venus Flytrap or any carnivorous plant in general.

How Do You Get Rid of Flytrap Smell?

If the smell is coming from a bulb that is turning brown or black, it means that it is probably dying and rotting. This can release a foul smell in the air. The best way to get rid of the smell, in that case, is just to cut off that head. It is dead and dying anyway, so there is no use in holding onto the stem.

Once you cut it off, throw it outside or in the trash to eliminate the smell. Leaving it in the soil will continue the smell. .

If it is due to something that the Venus Flytrap is eating, then you may just have to wait a few more days for the smell to abate. You may also not want to give your Flytrap that food again.

What Do Venus Flytraps Eat? 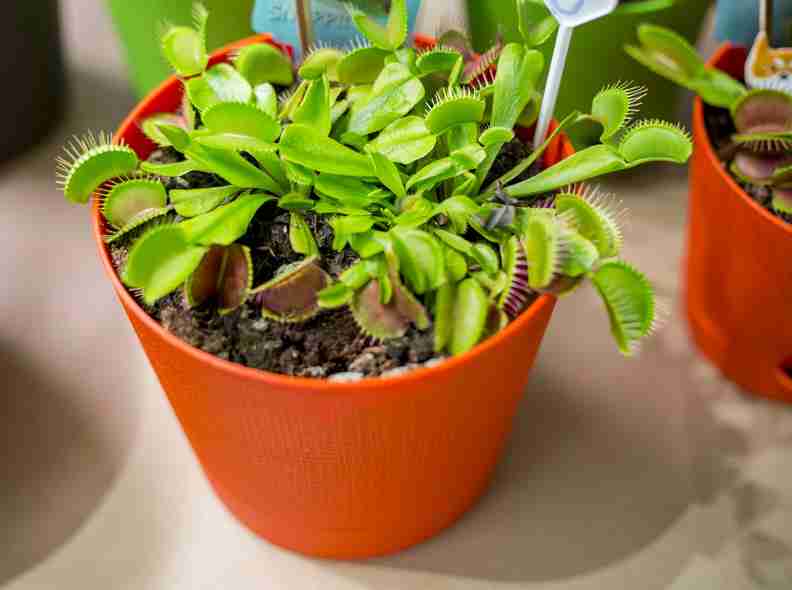 Some examples of things they commonly eat are:

How Many Flies Does a Venus Flytrap Eat a Day?

Despite the name, Venus Flytraps do not make excellent fly traps. This is because they don’t need to eat much. While feeding them more can make them bigger and stronger, it can also slow down their metabolism, making it slower for the insects to digest.

Generally, they say that some part of the plant should be eating at any given time. Since the plant takes about five days on average to break down an insect, they need to only eat about once a week. Sometimes, insects can take as much as ten days; in this case, you would only feed them every two weeks.

It is also better to alternate which stem of the plant is eating since they tend to die after a few feedings.

How Do Venus Flytraps Excrete?

Since Venus Flytraps eat insects, you may be wondering how they get rid of waste. Though they eat meat, they still do not excrete waste as animals do. They do not ingest the insects but create a soft goop full of nutrients from the bugs that they absorb. Most of the time, the exoskeleton of insects remains.

Whatever parts are left usually get spit back out or dumped onto the soil below them. The undigested parts are usually things like the exoskeleton.

Is There a Flytrap That Doesn’t Stink?

If you want something to catch bugs, but a Venus Flytrap isn’t doing it for you, you can look at other carnivorous plants. Many pitcher plants are often described as smelling of lavender, or mint. However, some people do describe them as smelling like cat urine. That means that might not always be an option for people that have sensitive noses.

If those options aren’t good, it may be worth getting any other plant, or artificial fly traps. This still provides you with greenery, and there are plenty of plants that don’t give off any smell. There are also artificial fly traps that don’t have a smell. Some fly traps can stink, and you want to remove the traps before the insects start rotting, but many don’t have an initial smell.

Venus Flytraps are nifty little plants. They eat bugs like flies, insects, and ants. Despite their names, they don’t have to eat a whole bunch, usually just one insect every couple of weeks, depending on the size.

Most of the time, these plants give off little to no odor. However, sometimes they may start to smell like rot. This could be because a part of the plant is rotting, like one of the bulbs, or an insect isn’t breaking down.

If this is the case, try feeding your Flytrap smaller insects and trim off any rotting bulbs to get rid of the smell.