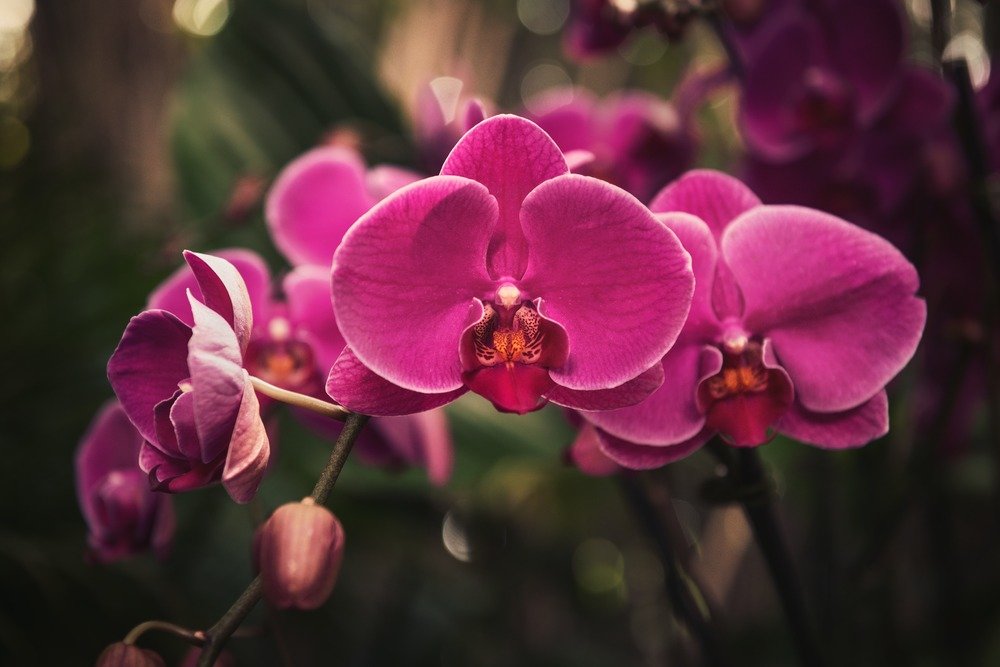 Orchids have earned a reputation as complex plants to grow. They are susceptible to diseases like bulb rot and leaf spot and can’t grow in regular potting mix. Traditional potting mix is too dense for Orchids since their aerial roots require easy access to water and air.

This unique requirement is both intriguing and puzzling for some gardeners. Trying to find a suitable growing medium for your Orchid might require a bit of trial and error.

Orchids can grow without soil in different mediums such as bark which drains quickly and allows the roots to breathe; perlite, which lasts longer than bark; coconut coir and sphagnum moss that provide excellent water retention; or even water.

Each of these potting mediums offers different pros and cons. If you want to know how to grow Orchids without soil, keep reading for our favorite suggestions.

Do Orchids Need Soil to Grow?

There are almost 30,000 species of Orchids in the world! Most species of this unique tropical plant are epiphytes, so they grow in the air rather than in the soil. They like to attach themselves to trees and live up high near the forest canopy. This means they want lots of moisture and lots of air.

If you’ve ever seen Orchid roots up close, you’ll notice that they’re covered with a spongy white skin called velamen. Velamen helps the Orchid absorb moisture from the air to aid the plant’s growth. These roots prefer to get nutrients from the air rather than in the soil. It’s common to see Orchid roots grow out of the soil rather than down into it.

The main job of a potting medium is to help keep the roots in place and provide the roots with a source of water. Orchids do best in loose, well-draining mediums like coconut coir, perlite, bark, or sphagnum moss.

How To Grow Orchids Without Soil

Let’s look at a few alternative potting mediums and how they should be used.

We’ll also look at how to grow Orchids in water. This method can be tricky if you’ve never done it before, and it has a higher rate of failure. 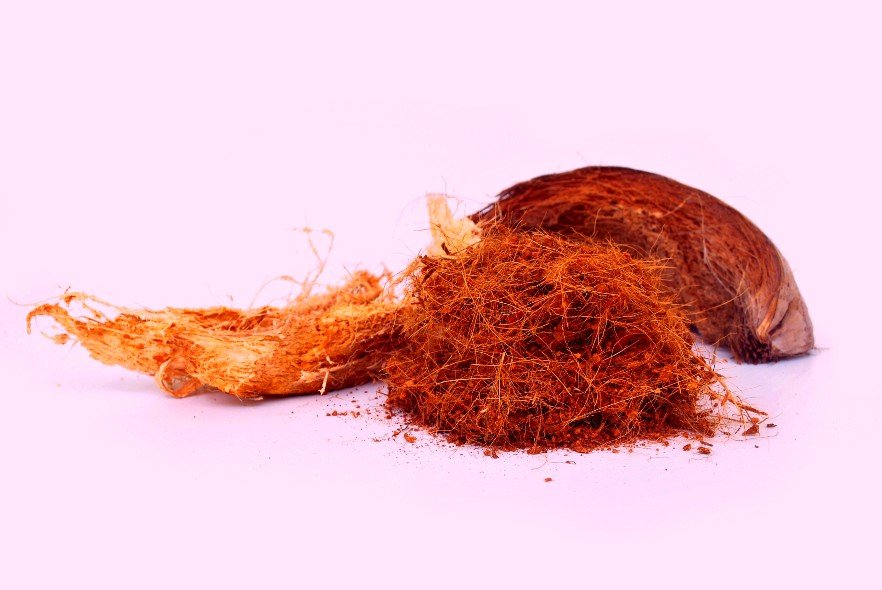 Coconut coir is made from the inner fibers of a coconut husk. This fibrous texture allows it to retain water and drain any excess. Coconut coir comes in dehydrated bricks that you must rehydrate before using.

Coconut coir is also rich in lignin, which is resistant to fungus and bacteria. This is perfect for Orchids, which are susceptible to disease.

You can use coconut coir for small pots up to 4 inches (10 cm) in diameter. For bigger Orchids in pots over 4 inches, use coconut chips instead. Coconut coir absorbs too much moisture in large pots and will cause root rot.

Ever wonder what those tiny white sponge balls are in your potting soil? This common soil additive is called perlite. Perlite is made from heated volcanic glass. It contains no nutrients but does provide excellent aeration and drainage. What’s also great about perlite is that it will not become compacted over time.

Often gardeners use perlite in combination with other potting mediums. Because perlite is so light, it tends to float around when you water your plant. It won’t be able to hold the roots in place without help from a material like bark.

Bark is one of the most common potting mediums for Orchids. Gardening bark is often made from cedar, fir, or cypress. Bark provides adequate drainage for Orchids and dries quickly. Usually, because bark dries so quickly, it must be paired with a more water-retentive material like perlite so the Orchid gets enough moisture.

The downside of bark is that it becomes soggy and breaks down over time. If you choose to pot your Orchid in bark, you will need to replace the bark every year.

Like coco coir, sphagnum moss can be bought in bricks. You’ll need to rehydrate the material before you can use it. Sphagnum moss is an excellent choice for Orchids because it retains enough water to provide nutrients to the plant. The downside is that it provides less aeration than other potting mediums due to its density.

Hydroponics can be intimidating to beginner gardeners, but there’s less to it than you think. Orchid aerial roots get nutrients from the water so that they can thrive in just a vase. This method is often used for the phalaenopsis Orchid, which has long, thick roots suited for water.

Most gardeners only submerge part of the Orchid’s roots and allow the other half to live above water. The benefits of growing Orchids in water include fewer pests and less fungal growth. It’s also a great way to observe your Orchid’s roots to ensure they are healthy.

The downsides are that the Orchid has nothing to hold the roots in place, so there’s a greater chance your plant will get damaged. It’s also notoriously difficult to get an Orchid to take to the water. It’s not uncommon for the plant to drop its leaves entirely or die.

Can Orchids Grow in Pebbles? 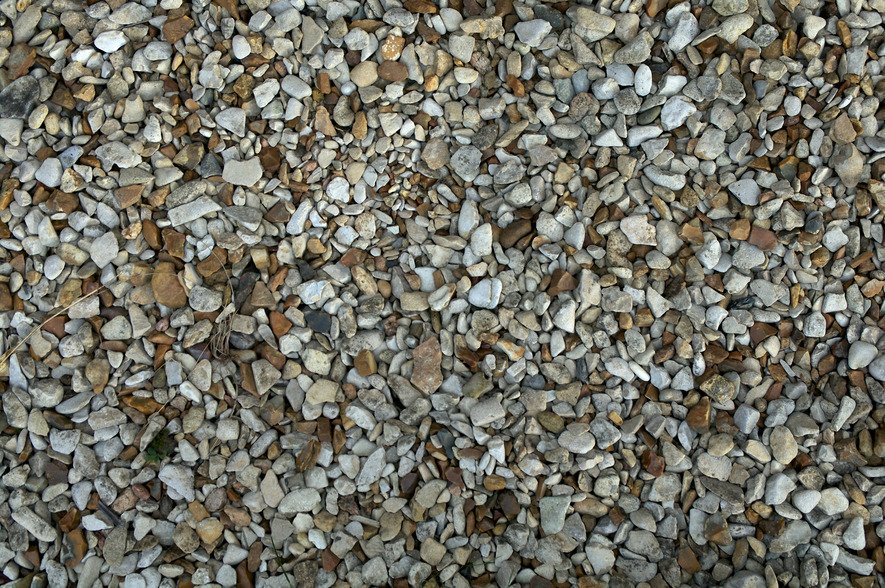 Orchids can and will grow in pebbles. But if you want a more beneficial potting medium for your plant, consider lava rock. Lava rock offers a solid structure for your Orchid to root into, as it won’t break down over time. It also provides excellent drainage.

Because lava rock is so porous, it tends to hold onto fertilizer salt, which can burn your Orchid’s roots over time.

How Do You Keep an Orchid Alive Indoors?

Orchids require a bit more work than your average houseplant, but the work is easy if you love gardening.

Orchids love their water, but overwatering can lead to root rot and death. When in doubt, it’s best to underwater your plant rather than overwater it. A well-draining potting medium will help you avoid overwatering.

Repot your plant once every two years or when the roots begin to venture out of the pot. Orchids don’t mind being a little root bound as long as the roots can still absorb water.

Can You Replant a Broken Orchid Stem?

Orchids are tall and spindly plants, so it’s not uncommon for their stems or leaves to break off. If the stem gets broken, there’s no way to reattach it. But you can still salvage the plant.

Make sure you remove the broken stem entirely with a pair of sterilized pruning shears. Contrary to popular belief, you cannot replant the Orchid stem in water or soil. Orchids require a rhizome (root) to grow, and those rhizomes are found at the base of the plant, not the stem.

Some gardeners like putting cinnamon powder on the severed stem tip to prevent infection. You can also seal it with candle wax. After some time, your Orchid may even regrow a new flower from the stem!

Do I Water an Orchid From the Top or Bottom?

Bottom watering is a technique where you submerge the bottom of the pot in water. This is often used for plants like African violets, which have fuzzy leaves that rot if they get wet.

One downside to bottom watering is that salt from fertilizers does not get flushed away as it would through top watering. Soaking an Orchid pot will also cause potting mediums like sphagnum moss to absorb too much moisture. This will eventually cause root rot.

For these reasons, it’s best to water your Orchid from the top. Just ensure you avoid watering the crown, which is prone to rot.

How Long Do Orchids Live Indoors?

Certain Orchids live longer than others, and your home’s climate will make a huge difference in your plant’s lifespan.

This flowering beauty requires more thought and consideration than just plunking it into some soil–but it’s worth it! Finding a potting medium to suit your Orchid is daunting if you’ve only ever used soil. Luckily, most soil alternatives are simple to use, inexpensive, and easy to find.

Bark is the most popular soil alternative for Orchids since it drains quickly and provides excellent aeration. Perlite offers excellent drainage and aeration and lasts longer than bark. Potting mediums like coconut coir and sphagnum moss are often added to bark to provide better water retention.

If you want a challenge, some gardeners have also successfully grown Orchids hydroponically!