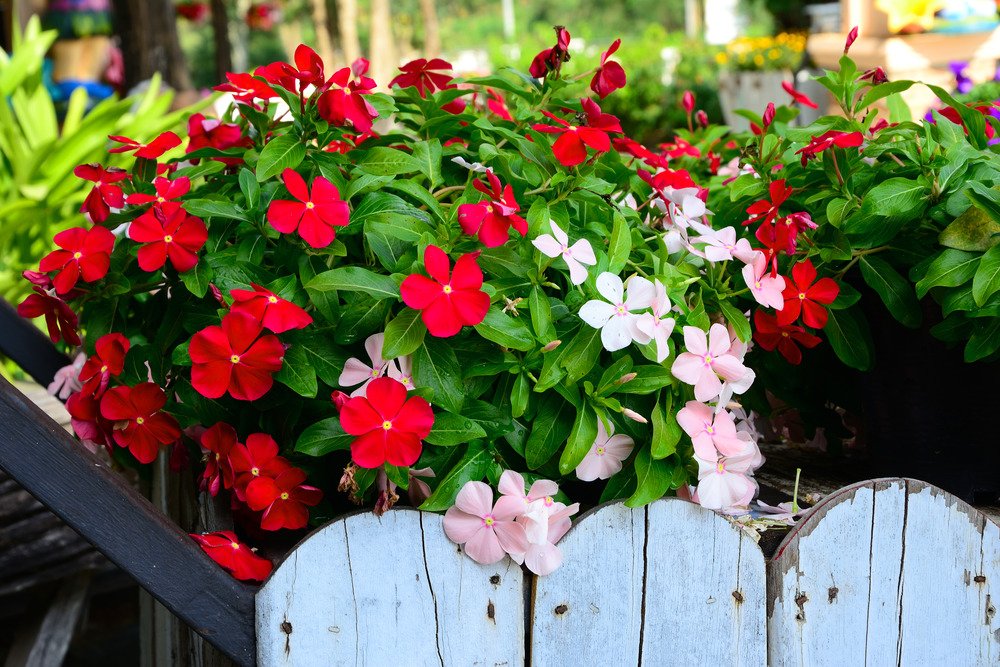 Vinca, also known as Creeping Myrtle or Periwinkle, is considered a flowering plant. They are perennials that can become ground cover or act like a small bush if given the right care.

On their own, they are runners. Their rhizomes under the soil spread out and allow them to stretch out pretty far. They also have vines that allow them to become creeping, trailing, or climbing plants with enough care.

Most of the time, you don’t have to care for the plant physically very much. They are considered self-cleaning and don’t really need to be pruned or pinched. The exception is if you want to make your Vinca bushier.

Since Vincas tend to naturally spread out, if you want them to be more compact and grow bushy, you need to look at pinching off new growth. This can help your plant to grow bushier and more compact instead of spreading out.

To keep your Vinca from getting leggy, be sure to provide direct sunlight, a balanced fertilizer to avoid too much nitrogen, and prune or pinch your plant regularly.

Why Is My Vinca so Leggy?

If your plant is leggy, it may be a sign that it isn’t getting enough sun or too much nitrogen is in its fertilizer. Your Vinca may be getting a burst of energy from the nitrogen and growing extraordinarily fast. They will often grow so fast that they aren’t producing leaves and flowers on that branch either, so it is just a long and bare stem.

If your Vinca is in an area where they aren’t getting enough sun, it may also start to grow leggy in areas in an attempt to find spots with a little more light. Sometimes these may also look leggy as they are busy trying to find sunlight instead of producing leaves and enhancing growth.

However, with Vincas, a lack of pruning is also one of the reasons that your plant may start to get leggy. Pruning promotes growth, but not pruning can prevent all areas of your plant from growing evenly. Your Vinca may begin to grow from certain branches instead of all of them, leading some parts of your shrub to look leggy.

What Can You Do With Leggy Vinca? 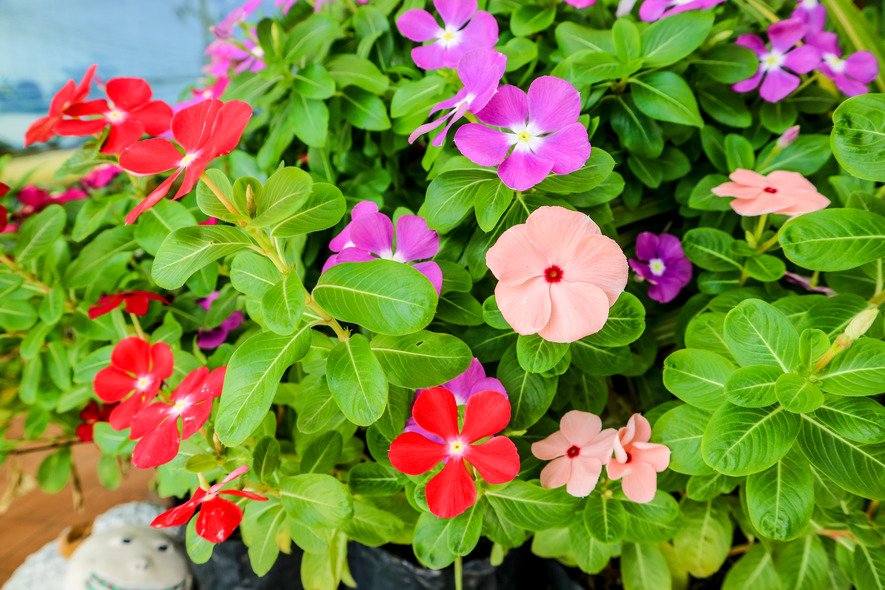 If your Vinca is starting to look leggy, the best option is to prune or pinch your shrub back. The areas of your plant that are very long should be pruned back to be the desired length. Additionally, if you pinch back the tips of your Vinca, you promote your plant to grow thicker.

This means you get a denser, bushier plant. Sometimes, this can even promote more flowers throughout the year.

Vinca don’t often get leggy if they are pruned properly. However, if you notice that your Vinca is leggy even after proper care of pruning and pinching, take a look at the light around your plant.

Vincas prefer to have full and direct sun. They can tolerate a little shade, but if they get too much shade, they will often start to become leggy in an effort to get more sun.

If that is the case, try to make the sun more accessible for your Vinca. You can replant them somewhere better suited to fit their environment or trim some of the other plants around them, including trees, to give your Vincas more sun.

Do Vincas Spread Out?

Vincas do tend to spread out. Even one plant has the potential to spread out over 8 feet (2.5 m). Vincas also have vines that will continue to spread if given the chance.

If given a trellis or something like a moss pole, a Vinca can even be trained to climb up and become a climbing or trailing plant.

They also spread out underground via runners, which makes them spread out as ground cover.

It is important to note that if you want your Vinca to spread out and act as ground cover, you don’t necessarily want to pinch the plant. Pinching off the plant promotes bushiness instead of branching out.

When Should Vincas Be Pruned?

Technically, Vincas are considered self-cleaning plants, meaning they don’t necessarily have to be pruned. All you have to do is occasionally pinch back your new growth if you want the plant to stay a certain shape or size.

Vincas tend to branch out evenly in every direction if given proper care, so they don’t need much maintenance for their growth or size. Pruning and pinching are primarily used to shape the plant more to your desires instead of letting them naturally grow.

However, pruning is beneficial if you have a fussy Vinca that likes to go leggy or want to keep a consistent shape or size.

To get the best results from your pruning, you want to do it in the late winter or early spring. However, you can also prune during the fall. This can promote flower growth.

Do Vincas Come Back Every Year? 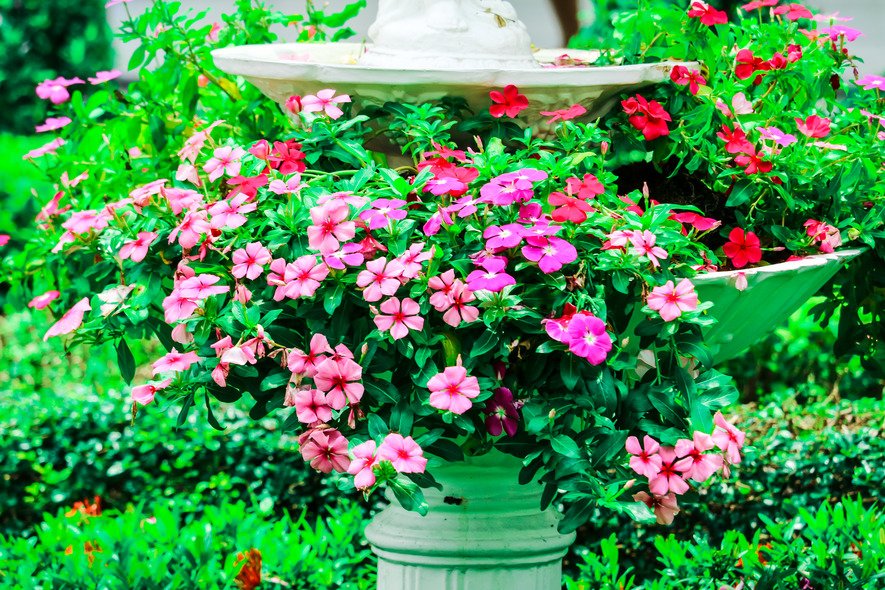 Technically, there are three main kinds of Vinca. There is Annual Vinca, Vinca Minor, and Vinca Major. The latter two are often used as ground cover, which tends to spread out far.

Those two are considered perennial plants. They come back year after year but do die during the winter. In some zones, they will stay as an evergreen perennial and remain green all year round.

The annual Vinca, however, as the name suggests, only grows once in certain environments. While in USDA zones 10 and 11, they can grow back multiple years, outside of that, they tend not to grow back and have to be replanted every year.

Additionally, many Vincas are hybrid varieties. This means that while they may look one way when they are planted, if you use their seeds for planting the next year, they may look different and not return true to type.

How To Make Vincas Bushier

The best way to make a Vinca bushy is to pinch the plant. This encourages plants, including Vincas, to be bushier. You can do this by pinching off new growths that are forming. If the growths are old, you can make a Vinca bushier by pruning limbs growing longer than you want.

Cutting Back Vincas for Winter

You don’t really need to cut back Vincas for the winter. However, if you cut back the plant shortly before the temperature drops and after the flowers die off, you can promote flowers in the fall. They recommend cutting back the Vincas to half of their size during this time to increase fall flowers significantly.

However, if you want to increase business, you want to cut back Vinca in the late winter or early spring for the best results.

Additionally, every two or three years, you will want to cut back your Vinca down to the soil. This increases the thickness, growth, and growth speed of the Vincas.

Vincas tend to take care of themselves naturally. They are considered self-cleaning plants because they will grow out evenly in all directions and spread as needed. However, occasionally, improper conditions like too much nitrogen in the soil or insufficient sun can cause them to become leggy.

Additionally, if you are trying to keep your plant at a certain length, they can become leggy when they try to grow out. Putting them in ideal conditions and taking the time to prune and pinch as needed is key to ensuring that your Vinca doesn’t grow too leggy and gets bushier.