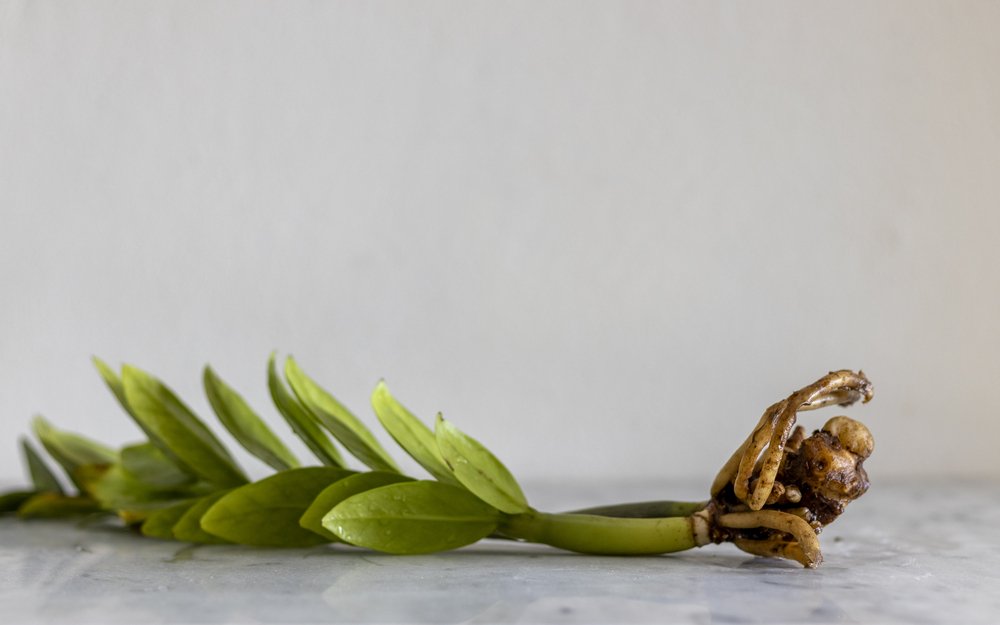 When you see a ZZ plant’s root bulb exposed, you may be worried. Perhaps this is your first time seeing the bulb, or maybe you just aren’t sure what is causing them to appear above ground when they usually stay under the soil.

So why and how do ZZ plant root bulbs become exposed?

First, it is important to note that these bulbs aren’t roots; they are rhizomes, which are essentially stems. Their job is to store water and nutrients throughout the year. They usually stay underground as coming above ground can cause them to dry out faster.

The ZZ plant’s root bulb typically becomes exposed due to lack of space as these bulbs grow circular and tend to become root bound easier than other plants.

If you want to know more about these rhizomes, keep reading below to learn about the bulbs, how they work, and signs of rot.

Why Is There a Bulb in My ZZ Plant?

Like many other plants, ZZ Plants grow from rhizomes. However, instead of roots that spread across the ground, either above or below it, ZZ Plant’s rhizomes are bulbous.

If you look at them, they may resemble potatoes. While they usually stay underground, at certain times, such as when they are in too small of a pot, they may begin to stick up out of the earth.

So when you are wondering what the bulbs in your ZZ Plant are, don’t be worried or try to pick them out.

It is usual for these bulbs to be underground; however, sometimes, they do pop out of the ground. This is usually an indicator that the plant is root-bound, and there is no more space for these rhizomes to grow but up. Occasionally, it can simply be due to soil erosion, but if it has been a long time since you added soil to your plant, it is probably time for a re-potting anyway.

How Do You Plant a ZZ Plant Bulb?

While rhizomes and roots may seem similar, they have different purposes. Usually, rhizomes stay close to the surface while remaining underground. For this reason, when you are planting a ZZ Plant bulb, you don’t want to bury it too far down.

When planting these bulbs, you want to be sure that the roots are facing down while the stems are facing upwards.

What Happens if a ZZ Plant Bulb Is Broken?

Thankfully, if you happen to cut through a ZZ Plant bulb or a bulb breaks, it isn’t the end of the world.

If you want, you can use this time to divide your ZZ Plant. Simply take the two bulbs and the associated roots and stems, and put one into a new pot. Sometimes, when trying to separate root-bound plants you end up with no other option than to cut through a bulb, and they can break due to stress.

Your plant should be fine if you take care of them by keeping the soil a little wet until it can start sprouting.

You will likely have some stem and leaf death on your original plant. This is because some of the stems have possibly been cut from the tuber they need to survive. As long as most of the plant is still looking healthy and happy, there should be no worry.

Though it is not technically a succulent, it behaves like one. It takes divisions of any kind pretty well. Besides the roots and rhizomes, the stems also can grow roots from their bottoms and create a new plant.

This is good because many owners of ZZ Plants report that the stems tend to get heavy as the plant ages. This leads to stems often breaking. However, if you take the stem and place the broken part downwards in the water, you will likely see roots growing from it soon enough.

If either of these takes a long time, don’t worry. Some people report these plants to be fast growers, but most find that they are pretty slow growing.

What Does ZZ Plant Root Bulb Rot Look Like?

Root rot in ZZ Plants looks similar to root rot in any other plant. The stems and leaves will change to brown or yellow and look dull. They may also become mushy and lose their vigor.

The roots are a sure sign of how much damage is done. If your roots are breaking, mushy, soft, and brown, they are heavily affected by root rot.

However, the ZZ Plant has something that some other plants don’t, and that is a bulb/rhizome. So what do rhizomes look like when they experience root rot?

The answer is that they are similar to other parts of the plant. They will generally look mushy and brown. Usually, ZZ plant bulbs look like potatoes and feel pretty similar as well. This means that they should be pretty thick, starchy, and tough. They will also generally be a dirty brown or white on the outside.

So if your rhizome bulb starts to look flattened, soft, or a rotted brown color, that is a sign that root rot is present in your plant, and something serious needs to be done.

Should the Rhizomes of a ZZ Plant Be Exposed? 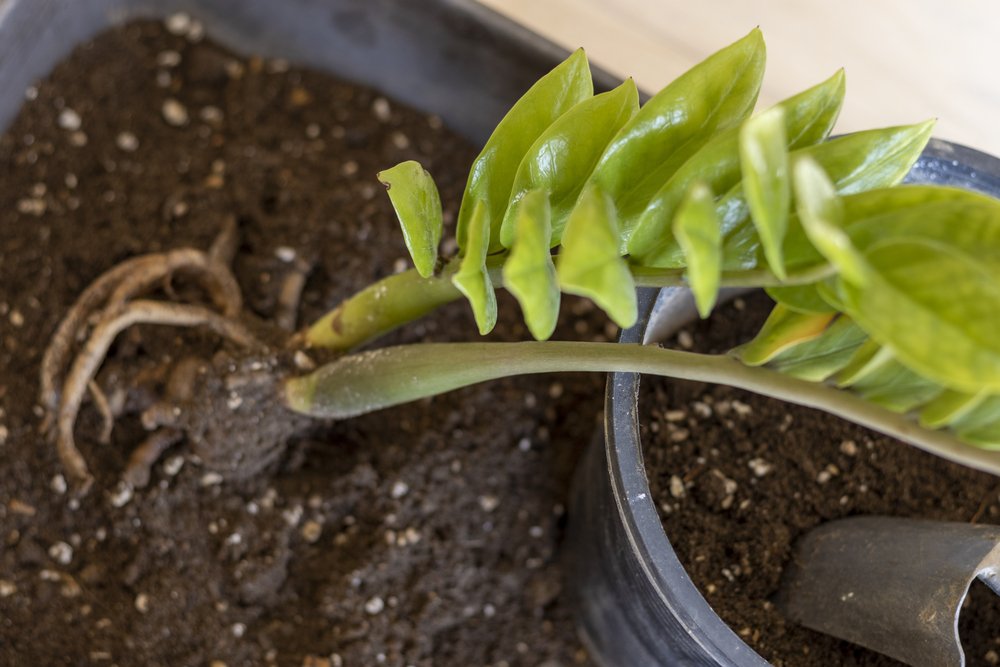 The purpose of these rhizomes is to help store water. This allows them to be drought tolerant for a long time, even up to 4 weeks without water.

When the root is exposed, it causes the water storage to dry out faster. Even sticking out halfway, they can cut down the plant’s growth and cause it to dry out much quicker.

Instead, you can plant ZZ Plant’s rhizomes 1 to 2 inches (2.5 to 5 cm) below the soil’s surface so that your plant can absorb and store water best.

Can A ZZ Plant Grow Without Rhizomes?

Though it looks a lot like a bulb and is bulbous in shape, it isn’t a bulb. Instead, the ZZ Plant’s bulb is the rhizome of the plant. Rhizomes are essentially just stems that are spread underground and create new plants.

The bottom of these rhizomes is where roots grow out. Without rhizomes, you wouldn’t be able to produce new growth. This means it would be difficult to propagate your ZZ Plant.

Also, while these rhizomes store water, it isn’t all they do. Rhizomes also help store essential vitamins and minerals, including starches. These help plants survive long, hot, dry periods where they aren’t getting new water or minerals brought to them.

So technically, as long as your ZZ Plant has enough water and nutrients, they can live without the rhizomes. However, they will be much happier with their rhizomes, and they will be able to grow and flourish with them.

Do ZZ Plants Have Aerial Roots?

ZZ Plants do not have aerial roots. Their roots and stems are known as rhizomes, which are underground runners. Above ground runners are usually just called runners. The only time you should see the roots of ZZ Plants is when it becomes so root bound in their pot that there is no option but to force the rhizomes up.

Otherwise, both the roots and the rhizomes should be safely underground.

Most of the time, you shouldn’t see anything unusual about your ZZ Plant. As the plant becomes root-bound or the soil starts to break down, you may begin to see that there are bulbs just under the surface.

The ZZ Plant’s root bulb typically becomes exposed due to lack of space as these bulbs grow circular and tend to become root bound easier than other plants.

They are important parts of your plant and work like underground stems. Most usually look like runners, but under the soil, the rhizomes of the ZZ Plant are bulb-like or tubular.

These bulbs help your plant to be tolerant in drought conditions and get the nutrients they need.