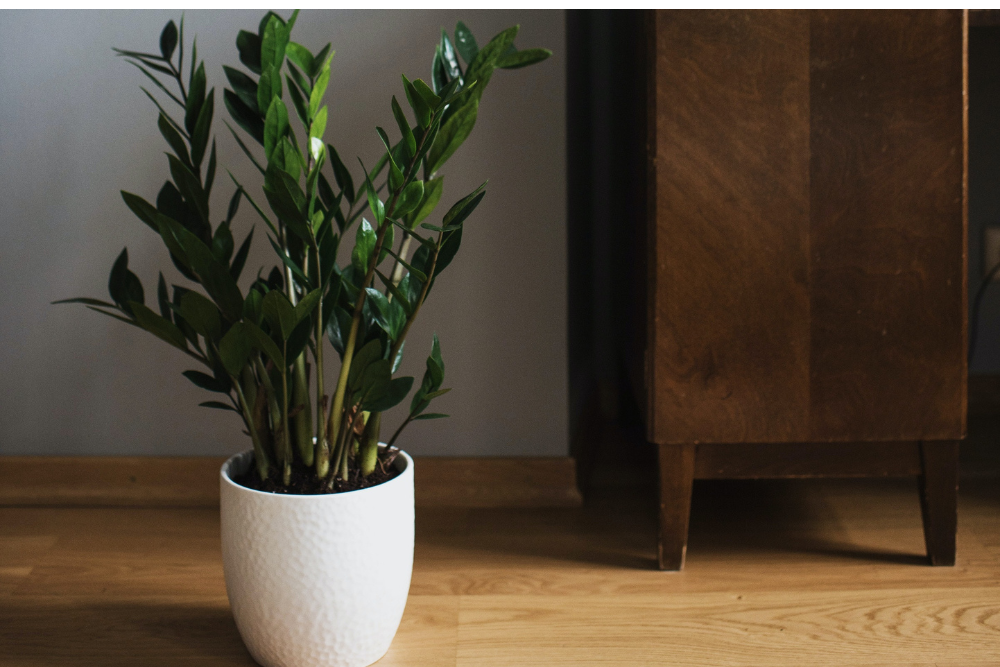 ZZ Plants, which are called Zamioculcas zamiifolia (ZZ for short), are plants that have been around for a while. They weren’t recognized as a great house plant until the 1990s, and their popularity hasn’t grown until the last few years.

There is a lot to like about these plants. They are excellent air purifiers and are great at removing toxins, as studied by NASA. They are also attractive plants. You may be wondering how many varieties are out there and what they look like so you can pick the best one for you.

There are four traditional types of ZZ Plants and about fifteen varieties; since they aren’t as popular as many other species, there aren’t many named varieties of ZZ Plants.

Even though there aren’t many ZZ Plant varieties, there is a wide range in their appearances. From dark purple and almost black to light lime green, you can find something you like in these varieties.

What Kinds of ZZ Plants Are There?

Compared to other plants with hundreds of different species and varieties, there aren’t that many kinds of ZZ Plants. It is hard to determine, as the number of ZZ Plants isn’t tracked.

However, there seem to be roughly four original plants. Now, with the varieties and patented plants, there seem to be about fifteen. At least, these are all the named ones. The new ZZ Plants are usually created by mixing and combining the genetics of different ZZ Plants, so we assume there will be more in the future.

If ZZ Plants are well-received, we can expect many more varieties in the future.

What Colors Do ZZ Plants Come In?

The foliage of a ZZ Plant tends to be anywhere from bright, light green to very dark green. Some of them are so dark that they may almost appear purple in places.

The flowers are usually small and relatively unremarkable, but they can be anywhere from yellow to bronze in color. It is rare to find flowers on your ZZ Plant, so don’t be surprised if they don’t bloom.

Additionally, with more and more varieties popping up, we expect to see more colors soon. Already, we are starting to see variegation. This usually appears as white and cream markings on the foliage. Some new cultivations are beginning to come out with gold variegation, though these plants aren’t super common yet.

Is There a Variegated ZZ Plant? 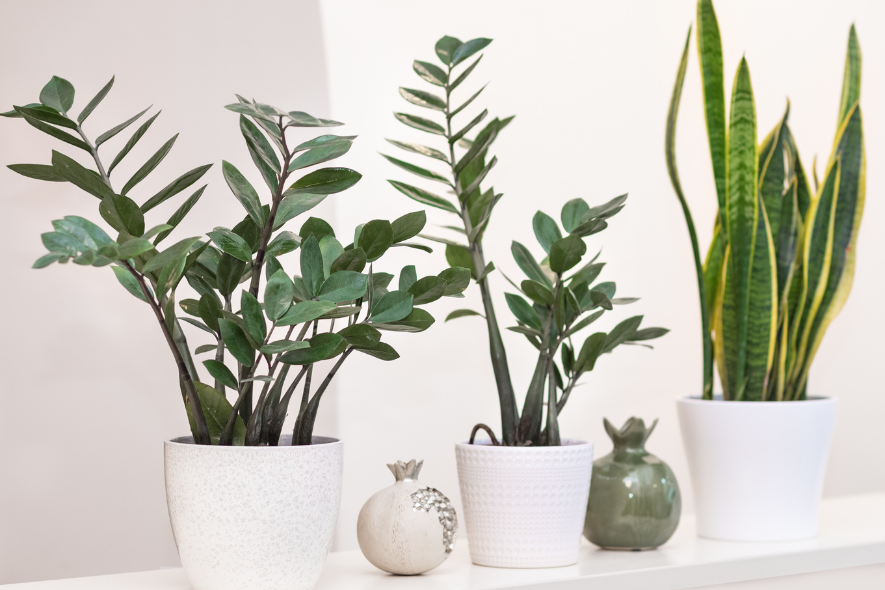 There are variegated ZZ Plants available. There are two main variegations currently, though more are being cultivated. These two ZZ Plant variegations are known as Luckywhit and the Chameleon.

The Luckywhit ZZ Plant is usually lighter green. They have blotches and marbling that are light green to yellow. They were found in 2007 by Edward Bruinen in the Netherlands.

The other is the Chameleon. Their leaves start bright yellow before turning solid green later on. These are a much newer variety, having been patented in 2020 by Michael Rimland from Miami. He managed to find this mutation while in Thailand.

What Is a Raven ZZ Plant?

A Raven ZZ Plant is still just a typical ZZ Plant. However, it was given this name because it is a lot darker. The leaves start light, lime green, but they turn purple and black as they mature.

The physical appearance is the only significant difference between the ZZ Plant and Raven ZZ Plant. They have the same  care requirements and needs, but this one is a little darker for those that like dark plants. It can also be an excellent option for those that want to break up their green garden with a bit of a different color.

What Is a Supernova ZZ Plant?

The Supernova ZZ Plant is a small ZZ Plant. It begins with young leaves that are lime green. As the leaves mature, they turn into a darker black or purple color.

Sounds familiar? Many people speculate that the Supernova and the Raven ZZ Plant are the same plant. Thanks to patents and ownership of plant names, many plants are sold under different names in different areas.

From the research, it seems like Supernova is a name for areas in the UK, while Raven is more of a name for the ZZ Plant in the United States.

Is a ZZ Plant Rare?

ZZ Plants aren’t super rare. However, they are just now starting to climb in popularity. They were initially found in the 1800s in Eastern Africa. They didn’t become thought of as houseplants until the 1990s and only recently have new and unique cultivars starting to take off.

With how quickly they are growing popular, we can assume at some point, the supply and demand might not match up, and they will become difficult to find, but that hasn’t happened as of yet.

One of the reasons they are so popular is the fact that they are very good houseplants. They can handle various conditions and are tolerant to drought and overcare. Plus, they are attractive and exotic plants that make them well-loved by those learning about them.

What Is a Rare ZZ Plant?

A lot of the cultivars are considered more on the rare side. While it isn’t necessarily rare as it is hard to find, since they are bred to be the version they are, there aren’t many available if demand suddenly increases.

Some of the more rare ZZ Plants include:

What Does a ZZ Plant Symbolize?

In Feng Shui, ZZ Plants usually symbolize things like growth and steadiness. By keeping them in the home or office, you can also bring good luck and fortune. Some other meanings often describe them as bringing strength, prosperity, and even creativity to those with one.

What Are Plants Similar to a ZZ Plant? 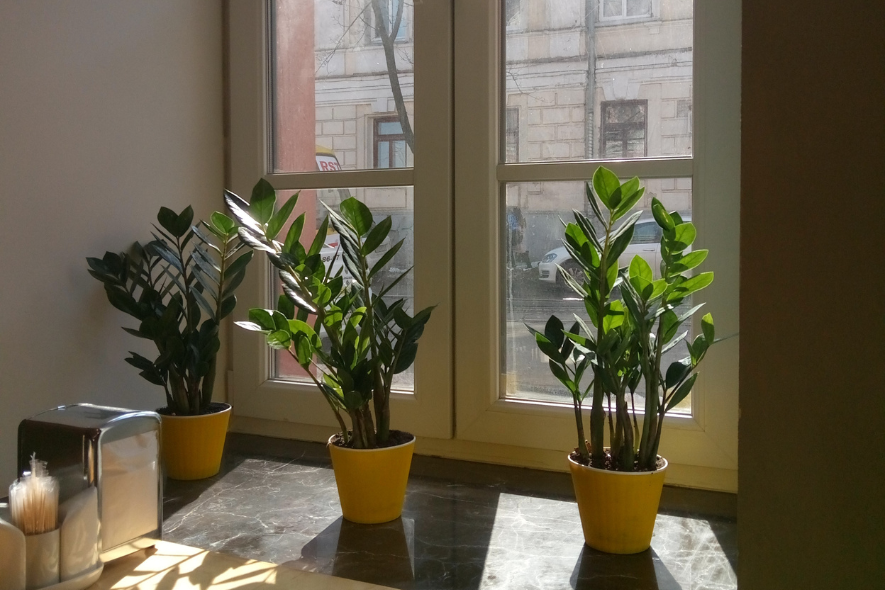 There are a couple of plants that are easy to take care of, like a ZZ Plant. The four most common include:

There are four traditional types of ZZ Plants and about fifteen varieties; since they aren’t as popular as many other species. There aren’t many ZZ Plants available out there, but more and more cultivars and varieties are appearing now. A lot of this is thanks to the increasing demand for ZZ Plants as they are growing more popular in the last several years.

The most common colors for ZZ Plants are light green, dark green, purple, and black. There are two variegated ZZ Plants and they are called Luckywhit and Chameleon. Two other common ZZ Plants are the Raven ZZ Plant and the Supernova ZZ Plant, both of which have leaves that start light green and turn dark purple and black as they mature.

Much of the ZZ Plant’s popularity comes down to the fact that they are so easy to care for. Like Jade, Succulents, and Pothos, they are pretty tolerant to all conditions and make wonderful houseplants.