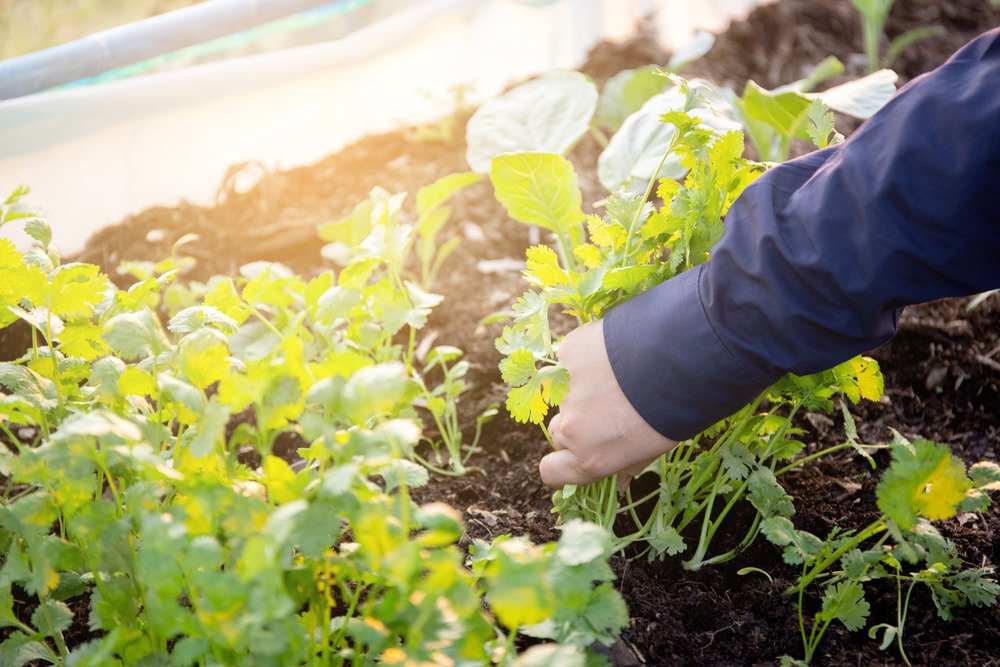 Cilantro has been a recipe staple for thousands of years, spanning back to many ancient Israeli, Mediterranean, and European cultures. Presenting as the leaves of a Coriander plant, Cilantro brings a punch of flavor and a host of potential health benefits to every dish it graces. Coriander seed and Cilantro are popular components in various Asian and Latin dishes.

In addition to taste and flavor, Cilantro has many health benefits. It is an excellent source of vitamins A and K and may reduce some pain and inflammation.

Growing Cilantro in your herb or vegetable garden is a great way to add freshness and nutrients to meal time. To harvest Cilantro without killing the plant, use clean scissors, cut the branches at a 45-degree angle from the stem, and leave at least 1 inch (2.5 cm) of the stem with a few leaves attached to stimulate more production.

How Do You Harvest Cilantro So It Keeps Growing? 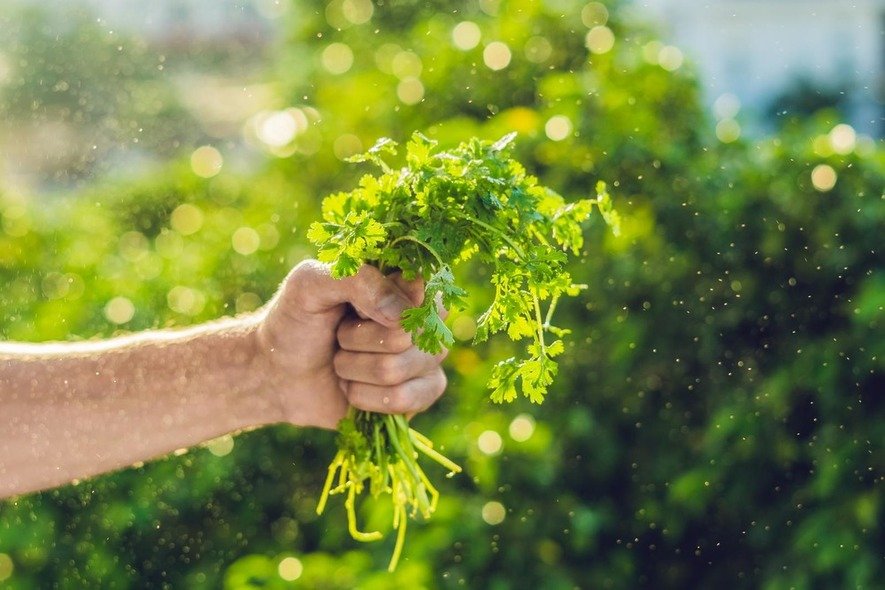 Before you can harvest Cilantro, you first need to grow it. Here are some tips for growing that first batch of Cilantro from a Coriander plant.

How to Grow Cilantro

You can purchase a reproducing Cilantro plant (Coriander) at any nursery and many grocery stores, or you can grow them from seeds. Usually, it is easier to start Cilantro seeds indoors near a window to get them established before moving the seedlings to outdoor soil. For seedlings to produce a crop by spring, try starting the Coriander seeds in late winter (late January to February), so they have plenty of time to germinate and sprout before the first frost.

Once the threat of frost has passed, you can move potted plants outdoors or transplant them into the garden. Use potting soil and compost for best results. If you plant the seedling in a container, make sure it has proper water drainage. If you plant Cilantro in the garden, space the plants 12 to 15 inches (30 to 38 cm) apart so the roots have room to expand.

Cilantro thrives in the milder temperatures of spring and fall – not as much in the heat of summer. You can even plant it in the early fall for an autumn harvest before the first frost. Some variations of Cilantro thrive in full sun, while others can tolerate some shade.

Keep the plant well-watered and give it a few weeks to grow. Most plants will be ready for harvest within 8 to 10 weeks.

Once the plant reaches at least 6 inches (15 cm) in height and produces healthy leaves, it can be harvested. Harvest all of the leaves at once or just snip off leaves as needed. If you harvest more than you can use, consider refrigerating, freezing, or drying the herb so you can use it later.

How To Harvest Cilantro Without Killing The Plant

Harvesting Cilantro regularly is essential to the plant’s overall health. The more frequently you harvest the leaves, the more Cilantro it will produce. While you can just harvest the Cilantro as needed, complete harvesting may promote better growth long-term. Nevertheless, your Cilantro will continue growing new leaves even if you harvest sparingly.

To harvest Cilantro without killing the Coriander plant, use clean scissors. Cut the plant’s stems at a 45-degree angle near the base of the stem, but leave at least one inch of the stem with a few leaves attached in the soil. This will stimulate the plant to more production.

How Many Times Can You Harvest a Cilantro Plant?

In ideal conditions, the Cilantro may be ready to harvest as frequently as once a week. Spring and fall are typically the seasons where Cilantro thrives, but it can continue to flourish into the summer with plenty of water and suitable soil.

However, Cilantro typically bolts in the heat of summer. Harvest as much as you can during the spring because it will probably produce little– if any– leaves in the summer.

Does Cilantro Come Back Every Year?

Cilantro is an annual plant, meaning it does not typically come back every year. In some warm climates, it may survive the winter months and leave behind the new Coriander seeds that can sprout into new Cilantro plants the following spring.

In the summer, Cilantro will probably begin to bolt. Bolting refers to the process in which Cilantro starts to die, but it does so beautifully. When the Cilantro bolts, it produces delicate white flowers. This signals the end of the Cilantro growing season. After a few weeks, the flowers will leave behind Coriander seeds.

If you want to continue enjoying your Cilantro harvest throughout the winter, consider storing some of the leaves. You can freeze some by placing the leaves in an ice cube tray and covering them with water. They should remain useful for four to six months in the freezer. You can also dry them by hanging the leaves upside down in a well-ventilated area.

Can You Harvest Cilantro After It Flowers?

When Cilantro bolts, it will bloom into little white flowers. Unfortunately, once the plant produces flowers, it will no longer produce Cilantro leaves. Typically, Cilantro will flower once temperatures get too warm in the summer. When this happens, the leaves begin to lose their flavor. Cutting the flowers will not stimulate the plant to produce flavorful leaves. Flowering signals the end of the growing season for Cilantro.

How To Pick Cilantro Leaves From The Stem

Rather than harvest the whole Cilantro plant, you may prefer to pull the leaves off as needed. Just pluck the leaf off from the stem, trying not to tear the leaf or the stem. It is difficult to harvest most of the stem without scissors or small gardening shears since this increases the likelihood of uprooting the plant or damaging the stem.

How To Harvest Cilantro Seeds

Cilantro seeds are actually Coriander seeds, and they have two potential uses: you can save them and plant new Cilantro plants, or you can add Coriander seeds to your spice rack and use them to season dishes.

You cannot harvest Cilantro seeds until the plant bolts and produces dainty white flowers. Once this happens, the Cilantro stops producing useful leaves. Try to avoid picking the flowers as they must naturally decompose to produce seeds.

You will notice that as the flower fades away, tiny green seeds are left in its place. Leave the green beads for several more days while they turn brown. These are coriander seeds. Gather them and store them indoors in jars, envelopes, or plastic bags.

Cilantro is an excellent addition to any home herb or vegetable garden, enhancing the flavors of many favored dishes as well as boosting nutrition. To harvest Cilantro, cut the branches at a 45-degree angle from the stem, using clean scissors, and leave at least 1 inch (2.5 cm) of the stem with a few leaves attached.

Remember, Cilantro grows from the Coriander plant and prefers mild temperatures. Plant in the spring or fall for the most harvest, but do not despair when the plant bolts and produces white flowers. Once those flowers decompose, you will be left with small coriander seeds that you can either add to the spice rack or plant the next season.

Choose the right variation and enjoy growing Cilantro. Dry out any extra leaves to keep Cilantro on hand throughout the winter, and enjoy planting those Coriander seeds again the next spring or fall.