Variegation is one of the latest houseplant growing trends, with hobbyists and experienced gardeners alike going crazy for it. So, what’s so special about variegated plants, and why are they becoming so increasingly popular? Can you induce variegation in plants at home?

Variegation is usually induced by experts in laboratory conditions, since using chemical mutagens, radiation, and transposing genes are fairly complicated procedures. Fortunately, some studies claim that there is a way to induce variegation in plants at home by using an alcohol-inducible promoter, such as a 2% ethanol solution, and spraying it on the leaves.

Knowing the science behind variegation is key to understanding why these plants are considered so rare and valuable. Let’s see why, unlike other trends in the past, the popularity of variegated plants does not seem to be diminishing as time passes.

What Does it Mean if a Plant is Variegated?

Variegation is caused by the lack of a green pigment called chlorophyll. As a result of variegation, different colored zones appear on the plant’s leaves, flowers, stems, and fruits.

Variegation can also occur in plants that are not primarily green. Dominant pigments found in these plants include carotenoids, which appear yellow to orange, and anthocyanins, which are red to purple.

In nature, variegation is rare. As the lack of chlorophyll means the plant has less energy, variegation isn’t of much use to a plant in the wild. Variegated plants in garden centers and nurseries are selected for their uniqueness and beauty.

How Do Variegated Plants Look? 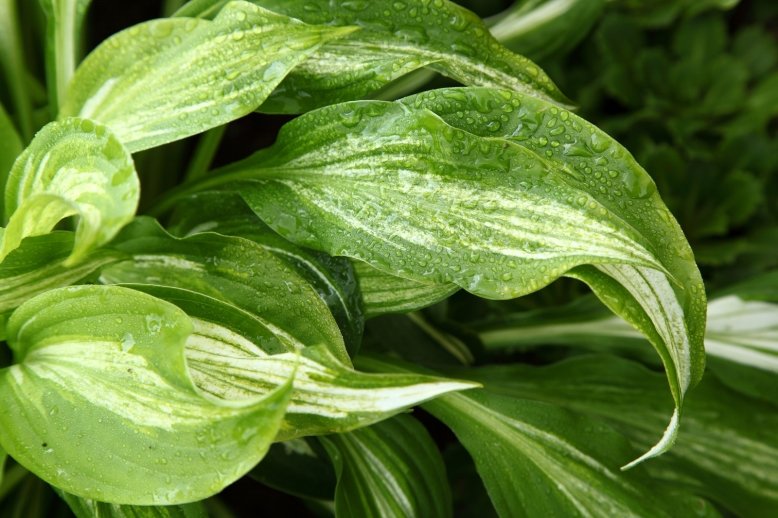 Variegation refers to the presence of different colored spots on leaves, stems, fruit, or flowers. On some plants, variegated sections are clearly visible, while on others, the transition between different sections may be more subtle, with one color blending into its neighbor.

Sometimes variegation will take over an entire leaf so that it displays only its altered color. The colors that appear are not only white, but can be various shades of yellow, orange, red, purple, gray, and more. Thus, a variegated plant will appear to be two-toned or multi-tonal.

Can Any Plant Have Variegation?

Whether or not a plant can achieve variegation depends on a variety of factors, both natural and environmental, including the plant’s genetics and growing conditions, the plant’s species, the amount of light it receives, and the temperature of its environment.

Consequently, variegation is not something that can be easily achieved or controlled. However, for those plants that do exhibit variegation, the results can be quite stunning.

What Causes Variegation in Plants?

Variegation in plants can be caused by infection or injury, as well as by natural means or artificial means, such as chemical treatment, radiation, or modifying specific DNA sequences. In some cases, variegation can be caused by a combination of factors.

For example, variegated leaves are often the result of virus-infected cells that have been damaged by herbicides. Whatever the cause, variegation is typically a cosmetic defect that does not affect the plant’s overall health.

Can You Induce Variegation in Plants at Home? 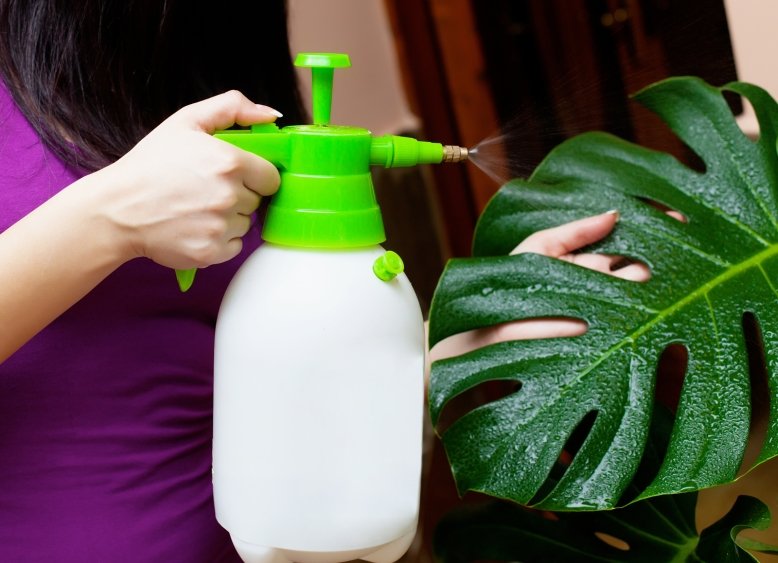 One way to induce variegation at home is to use a 2% ethanol solution. When applied to the leaves, ethanol will cause the leaves to turn white or pale. While this method is not 100% effective, it is a relatively simple and inexpensive way to variegate plants.

Furthermore, it does not require any special equipment or training, making it accessible to anyone who wants to try it.

To induce variegation, put a 2% ethanol solution in a spray bottle. Mist the leaves of your plant once a week. After several weeks, you should start to see some variegation developing. Keep in mind that variegated plants will require more care than green plants, so make sure to give them plenty of light and water.

Ultimately, whether or not this method is successful will depend on the plant itself. Some plants are more likely to variegate than others, so it is worth experimenting with different species to see what works best.

Other Methods To Induce Variegation in Plants

Producers mostly opt for artificially created hybrids because of their unique and striking appearance, and there is a wide range of such plants available for purchase. Theoretically, there are three basic ways in which it is possible to artificially make a variegated plant:

All of the above methods are extremely complicated to perform at home and are usually performed by experts in laboratory conditions. However, sometimes variegation occurs naturally, so if you are lucky and patient enough, there is a chance that it will appear on your plant.

Ethyl Methanesulfonate (or EMS for short) is the most common substance used to cause a chemical mutation. According to the Encyclopedia of Toxicology, it belongs to carcinogenic, teratogenic, and mutagenic reagents.

In this case, Gamma or X-rays are used on already rooted plant cuttings. The rays not only affect the color of the leaves but also change the DNA structure of the plant, which can affect the size and number of leaves and also the color and size of the flowers and branches.

According to the Journal of Pharmacognosy and Phytochemistry, the doses of Gamma radiation that can be administered are from 100 to 300 Grayes. Any dose over 300-450 Grayes affects the plant so much that the survival rate is close to zero.

There are numerous scientific papers on gene transposition, and compared to the previous two methods, this one is the most complicated. Transposition generates DNA. Scientists use small sequences of the plant DNA, isolating and rearranging the sequences in order to obtain a genome that affects the variegation of leaves.

Other Types of Variegation 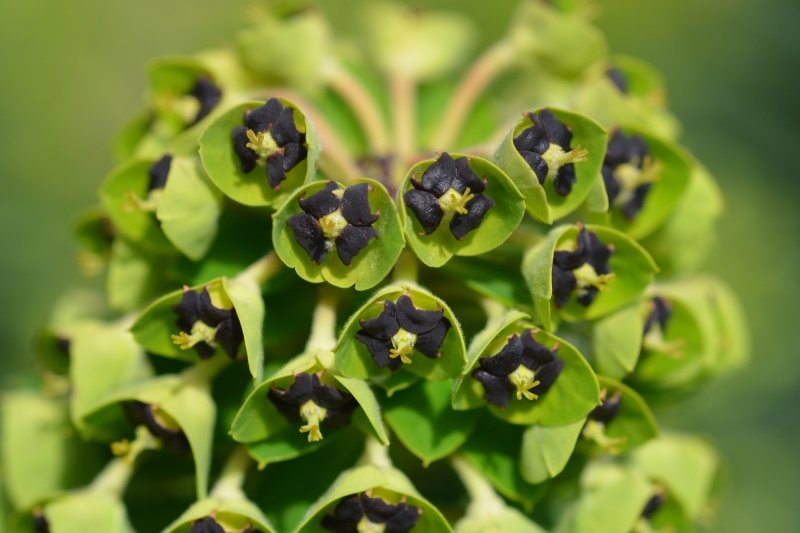 In addition to artificially inducing variegation, there are certain cases in nature that can cause it, although it rarely happens. The main reason variegation occurs in nature is viral infections or mutations.

Variegation due to viral infection is undesirable because the plant, although attractive in appearance, has severely weakened immunity, leading to the spread of infection.

Furthermore, some viruses can be transmitted by pests, further weakening the plant and causing it to die. One such virus is DSMV or Dasheen Mosaic Virus. Infected houseplants develop mosaic-like patterns and brightly colored spots on their leaves.

We’ve seen that variegation mutation in plants can be artificially induced, but it can also occur spontaneously. Plants that go through the process of spontaneous mutation are called Chimeras. One of the reasons that Chimeras occur in nature is because plants try to better adapt to their environment.

For example, a plant with two sets of genes may be better able to tolerate changes in temperature or moisture levels. Chimeras can also occur when two plants fuse together. This can happen when two plants are growing next to each other and their roots become entangled.

There are 3 types of Chimeras:

Periclinal Chimeras – the most important category of Chimeras, since they can be easily propagated and are relatively stable. An example of this group is the Thornless Blackberry.

Mericlinal Chimeras – are characterized by a small number of mutated cells, so most of their leaves remain normal.

Sectorial Chimeras – are those with unstable mutations.

There are some plants that are variegated without any mutations and diseases. Sometimes called Pattern-Gene or Pigmented Variegation, it is a rare occurrence in nature because such plants have white lines or dots caused by the lack of chlorophyll.

This means less energy for the photosynthesis process and slower growth compared to their fully green buddies. There are plants that have a gene written in their DNA that is passed down from generation to generation, and unlike the Chimeras, such plants are not mutants.

For example, the Fishbone Prayer Plant, Calathea, and many other members of the Marantaceae family found in Central and South America, as well as the Caribbean, have a natural variegation present and have evolved to thrive even with lower levels of chlorophyll.

The true non-green plant varieties, those completely lacking chlorophyll, have lost the ability to photosynthesize, and therefore must rely on other means for obtaining nutrition.

Non-green plants have adapted to their unique environments in a variety of ways, and they continue to fascinate scientists with their intriguing biology. 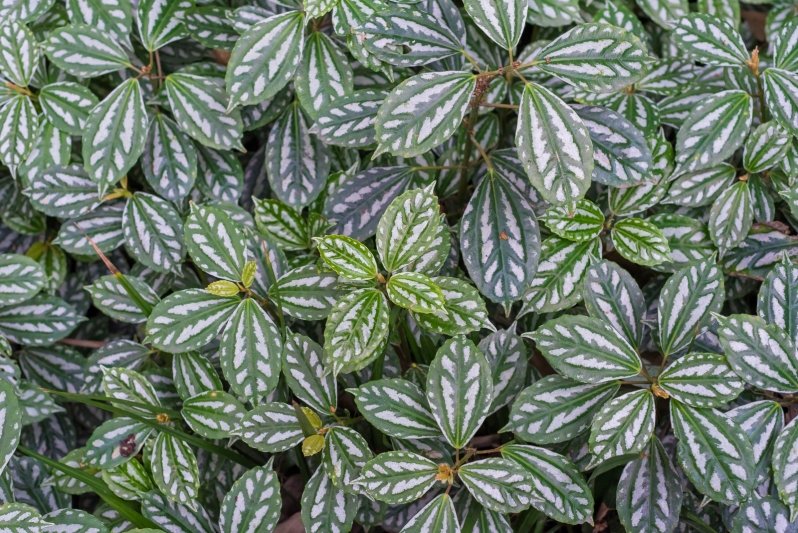 Another type of variegation is caused by small air pockets that exist between the pigmented lower and unpigmented upper layers of the leaves. It is called a blister because the affected parts become sparkly and silvery. It occurs along the veins of the leaves or between them.

Some examples of plants susceptible to this type of variegation are Pilea Cardierei, Anthurium, Alocacias, and Philodendrons.

How to Maintain Variegation?

Depending on the plant type, the variegation can be stable or unstable. Plants with unstable variegation tend to return to their original form because nature strives to reduce chlorophyll deficiency, increase immunity, and accelerate the plant’s growth.

The following methods can be used to keep the variegation present.

Since variegated plants are deficient in chlorophyll, and the remaining green parts of the leaves have the task of feeding the whole plant, they need to be provided with many hours of indirect light.

Ideal lighting and temperature will have a positive effect on the plant’s immunity. The temperature should be constant, without sudden changes and drafts. Of course, such conditions are easiest to maintain indoors.

Whenever fully green leaves appear, they have a stronger gene and a more vigorous growth rate and will overtake your plant.

When your plant starts growing non-variegated leaves, cut them off. Clip the branch just above the node, which is where the stem connects to the thicker portion of the branch. Do this again for any leaves that are not variegated.

Variegated plants are rare and, therefore, incredibly desirable and sought after among plant collectors. As a result, they are sometimes very expensive. Unfortunately, cultivating variegation in plants through any of the artificial methods described above is a difficult task and cannot be accomplished at home in most cases.

However, some studies suggest that variegation can be induced at home by spraying the leaves using a 2% ethanol solution, so it might be worth a shot if you really want to try it out for yourself.

While it won’t hurt to try to induce variegation at home using the technique we’ve mentioned, or simply to wait for a unique phenotype to emerge spontaneously, when it comes to indoor gardening, the truth is that the best way to obtain a variegated plant is to appeal to Lady Luck and wait for her to smile upon you.