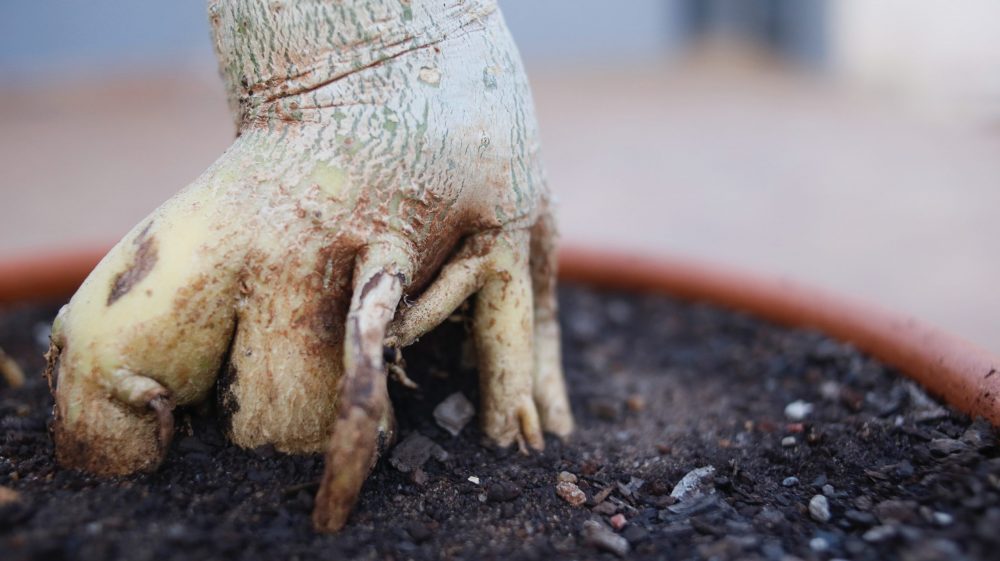 If you’re getting ready for the spring sowing season, you need to know how to tell if dahlia tubers are dead. Planting a dead tuber is a waste of time, space and it won’t produce any flowers.

Dahlias have tuberous roots that store enough energy and food at the end of the season to survive the winter. While the tubers are dormant in winter, improper storage can lead to molding, shriveling, and eventual death.

Before making the mistake of planting a lifeless tuber, learn how to tell if dahlia tubers are dead.

You can tell your dahlia tubers are dead if they’re dehydrated and brown or moldy, mushy, and emit a repelling smell. Both the dehydrated and the rotten tubers won’t have any white flesh inside.

The leading cause of dried-out dahlia tubers is early removal and improper storage. Mold is a result of excess moisture and fungus.

When to Dig Out the Tubers 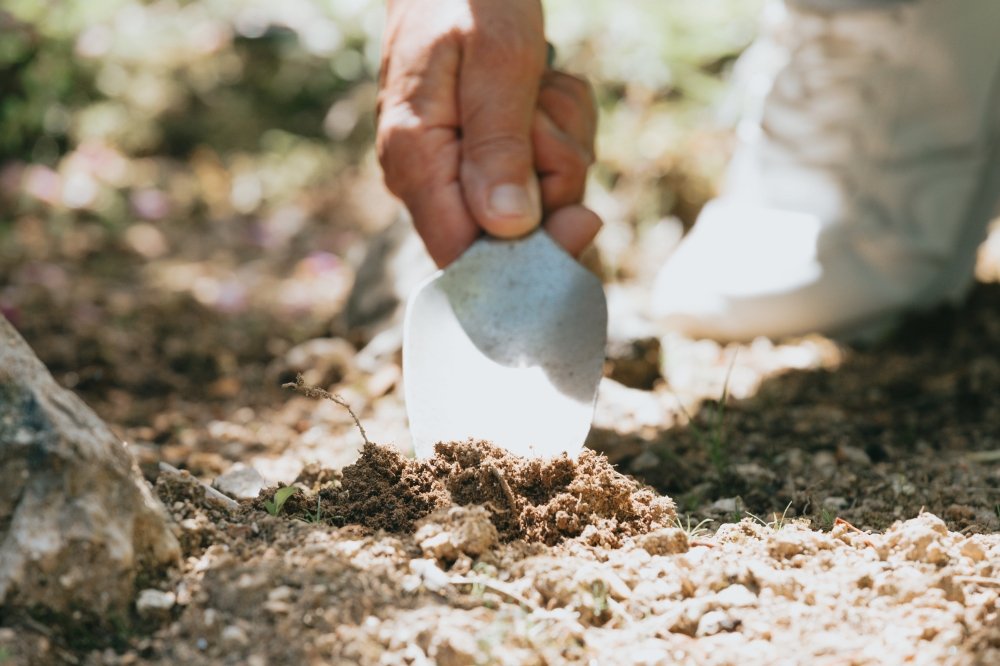 Dahlias love a warmer climate and can be inground perennials in places where winter temperatures don’t fall below 15°C/60°F. Will dahlias come back if you live in a cooler climate? As long as you dig out the bulbs in the fall.

Can you leave dahlias in the ground over winter? If you keep your dahlias in pots, you don’t have to dig them out. Just transfer the pots to a sheltered spot when a hard freeze is expected.

The bulbs feed by absorbing minerals and moisture from the ground and energy from the foliage. So keep the foliage a little longer and the tubers in the ground so they can mature. A mature bulb has a higher chance of surviving the winter.

Start digging out the bulbs after the first frost. At this point, you’ll notice dahlia leaves turning brown. The frost will kill the foliage, so the bulb no longer receives any energy. Are my dahlias dead at this point? They’re dormant, so this is the perfect time to dig them out.

Lift the bulbs using a garden fork and brush off the excess dirt. Then, cut the remainder of the stem if there’s anything left. Leave the bulbs intact, don’t separate them.

How to Divide Dahlia Tubers

Some gardeners prefer to separate the bulbs before preparing them for storage. This makes it easier to dry and store large tubers but must be performed carefully.

Take a look at the tubers and notice where their ‘eyes’ are. These eyes appear around the collar of the last year’s stem. They’re a clear indicator of where to expect new growth the following season.

How to tell if dahlia tubers are dead at this step? If your tuber doesn’t have eyes, it won’t grow into a plant, so storing it is pointless.

Use a sharp knife or a saw to separate the tubers. Don’t cut each tuber separately! Instead, cut the large tubers into groups with eyes. You can divide one large tuber into 4 to 5 bunches.

Why You Need to Dry Dahlia Tubers

What do dahlia tubers look like at this point? If they’re too plump, you need to dry them out. This seems contradictory, but there’s a good reason behind this step.

Excess moisture in the bulbs leads to spoiling. Just like overwatered dahlias leads to stem rot, wet bulbs will rot. Do dahlia bulbs shrivel when dry? Some of them might lose more moisture and look like wrinkly potatoes. But it doesn’t mean they’re dead.

The drying process is easy; spread the bulbs on a dry surface in a cool spot with good airflow. This can be a shed or garage. If your bulbs are in a larger clump, let them dry for at least a week. Smaller bulbs only need 3 to 4 days.

How to Properly Store Dahlia Tubers

Dried dahlia tubers are now ready for storage. A storage medium can be used such as vermiculite, sawdust, peat moss, and cedar chips. These mediums help the tubers retain some moisture but don’t disturb their dormancy or cause them to sprout.

You can also wrap the tubers in old newspapers. This storing method prevents dahlia tubers from rotting if the tubers are too moist. But it can also lead to dried dahlias and no sprouts the following season.

How do you revive shriveled dahlia tubers? The best thing about dahlias, besides their mesmerizing blooms, is their hardiness. But they’re not everlasting. When do dahlias die? Bone-dry dahlias are not viable, but shriveled tubers are fine.

Why did my dahlia tubers shrivel? It’s a natural process; as long as there’s still some moist flesh, the dahlia will sprout.

But can you rehydrate shriveled dahlia tubers? The best way to rehydrate the dahlia tubers is to soak them in a bowl with lukewarm water and place the bowl under direct sunlight. Then sow the tubers in pots to set them up for success. Once they’re established, you can transfer them to the garden.

Should Dahlia Tubers be Soaked Before Planting?

Healthy dahlia tubers look like a fresh potato, juicy and fresh, with no wrinkles. But soaking even the healthy dahlias helps with faster sprouting.

So how long should dahlia tubers take to sprout? After 4 to 5 weeks, you’ll notice some green offshoots. Starting the tubers early in pots and placing them in bright sunlight helps speed up the process.

How do you know if a plant is dead? If the tuber doesn’t spout for 2 months, it’s probably dead.

How deep should you plant dahlia tubers? Dahlias don’t need to be buried deep, you can cover them with 2 to 3 inches of soil, and they’ll be fine.

How often do you water dahlia tubers depends on where you plant them. Overall, dahlia tubers don’t require a lot of water, and overwatering will lead to root rot.

How to Tell if Dahlia Tubers are Dead

Touch them and feel their texture. Dead dahlia is completely dry with no viable flesh. There are no eyes on the end of the tuber. You can attempt rehydrating only if you can feel some flesh.

What can I do with dry dahlia tubers? Dry tubers are worthless. They won’t sprout, and planting them is a waste of time. But it did teach you a valuable lesson on how not to store your tubers!

Dahlia tubers need to have the consistency of a fresh root vegetable, hard and juicy. Soft tubers are rotten and won’t produce a plant. They’re more likely to decompose and create a strong odor.

Your tubers might’ve had some signs of molding even when you dug them out in the fall. Dahlias are susceptible to root rot, with the leading cause being overwatering. Or maybe you’ve stored them near another moldy tuber.

Mold pathogens are fast to spread, leading to decaying tubers. Mold is one of the most evident signs of how to tell if dahlia tubers are dead.

Dead dahlia tubers are characterized by color; they’re either scorched and brown or rotten and covered in white and pink mold. If you have doubts, you can cut through and look at the flesh. Good tubers are white and hard; dead tubers have no white flesh and feel softer.

When separating, make sure each tuber keeps the sprouting spots or eyes. Then, store the dahlia tubers in a cool and dry place, covered in a medium until next season, to prevent future disappointments.