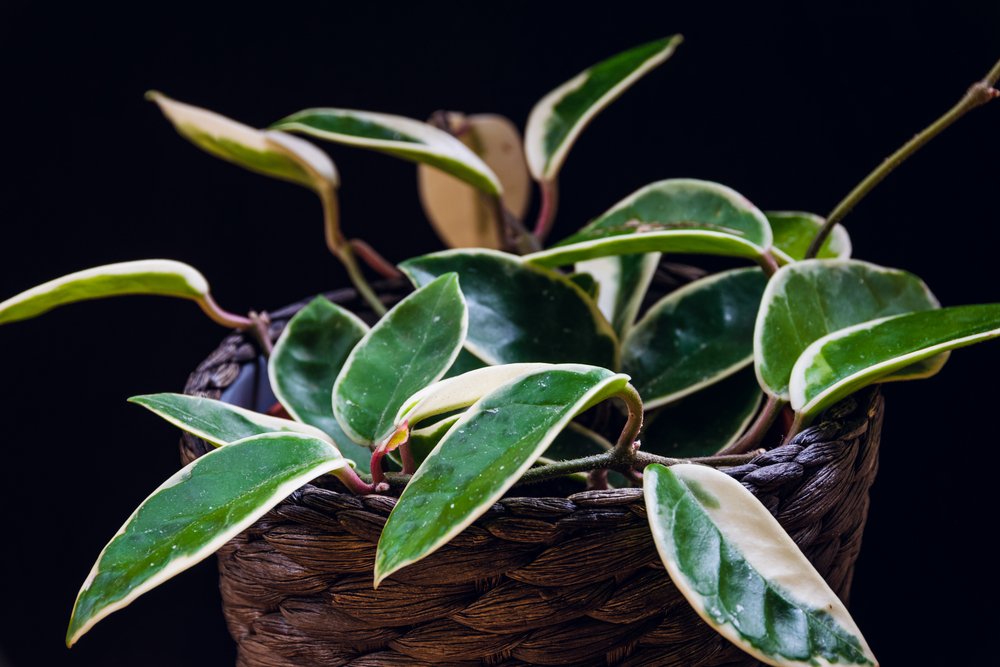 There are hundreds of varieties of Hoya plants out there. The Krimson Queen and Krimson Princess are of the Carsona variety, and a lot of people get them mixed up due to their similarities.

These plants may look the same from a quick glance, but there are some minor differences that make them distinct. The main difference is the leaves of the Hoya Krimson Queen are a darker green, with any variegated color appearing on the outer edge, while the Hoya Krimson Princess leaves are lighter with patches of color in the center.

Keep reading to learn more about the main differences between these two plants, and how those variations affect their care and needs. 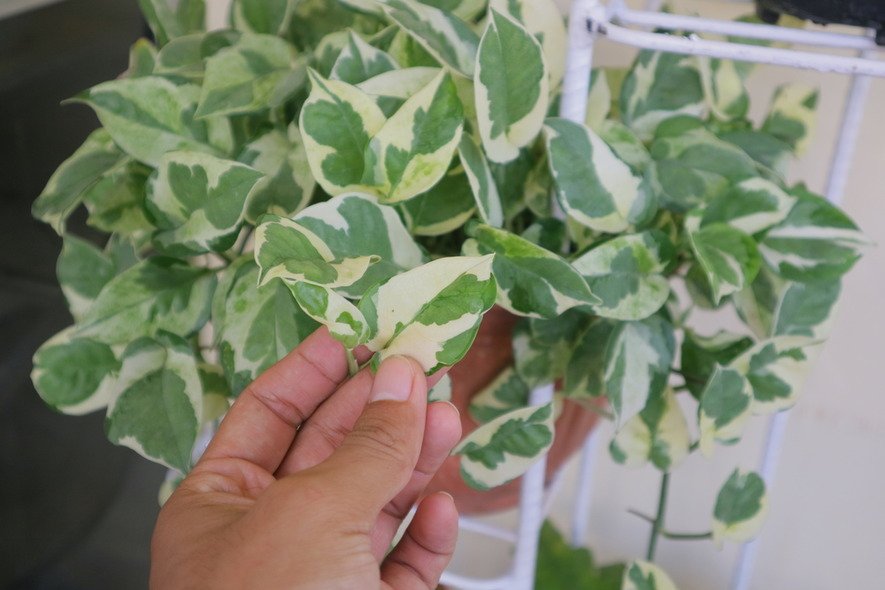 Hoyas are related to the Milkweed family, and are often referred to as Wax Plants due to their waxy leaves. They are also sometimes called Porcelain Flowers because of their small, delicate flowers shaped like stars.

There are between 200 and 300 different species of these plants. They are predominantly found in Asia and Australia.

Despite traditionally being considered tropical plants, they are highly drought-resistant and have been gaining massive popularity in the indoor gardening community.

What is Hoya Krimson Queen?

Also known as Hoya Carsona Variegata, the Hoya Krimson Queen is well-known among plant enthusiasts for its beautiful, rich green leaf coloring with a thin cream or pink edge on the outside.

It is worth noting that some of these leaves can turn solid white in a sort of albinism, but this isn’t necessarily healthy for your plant as white leaves cannot photosynthesize enough sunlight. While a few are okay, too many can cause your plant to waste too much of the sun’s energy and either grow weak or not be able to bloom.

Hoya Krimson Queens are fairly easy to grow and are popular because of their beautiful waxy leaves. They also grow small clusters of white, star-shaped flowers, but it can take years before they start blooming, and are quite an achievement.

These flowers are usually a light pink, with a second, smaller set of star-shaped petals that are a similar shade. The center is often darker pink or at least has some darker pink in it with a trace of yellow or cream in the very center. They grow in large clusters that are often circular in shape.

They look similar to other Hoya Carnosa varieties with their winding vines and large, waxy leaves.

What is Hoya Krimson Princess?

Also called Hoya Carnosa Rubra, the Hoya Krimson Princess usually has light green, waxy leaves that have a stunning burst of pink or cream in their center.

Like other plants of these species, the Princess is a climbing plant that spreads out and looks beautiful in any setting.

The leaves are the easiest way to tell the two plants apart. Once you know what you are looking for, the differences are immediate and can make telling apart the varieties very easy.

The leaves of the Krimson Queen are often a lot darker, with a line of color on the outside of the leaf. If you are comparing them directly, you can also see that their leaves are thinner.

In comparison, the Krimson Princess has a lighter green color on the leaves. They also have a cream or pink color that adds variation to the petals. However, unlike the Krimson Queen, the variation is in the center of the flowers while the outer edge is green.

While there is a difference between the flowers of the Hoya Krimson Princess and the Queen, this is not one of the easiest ways to tell them apart. This is because it isn’t often that these Hoyas bloom, and in fact can go several years without flowering.

For indoor plants, in particular, it is incredibly hard to use flowers to help you tell the difference. This is because Hoyas often don’t do well in indoor settings as they don’t get the proper amount of micronutrients or light that they would get in their natural environments.

However, there are also subtle differences between the flowers that become easier to notice when you have a Princess and Queen right next to each other. The Hoya Krimson Queen’s flowers are pink in the center while the Hoya Krimson Princess’ flowers are a little more reddish-pink.

In general, the flowers for both are a faint pink but can also be white. The flower petal color itself does not differentiate the plant varieties, as both can have pink or white flowers. It is only the center that can tell them apart.

Other than the initial color when growing, the stems are similar. They are both long and trailing and look beautiful hanging from whatever feature you put them on.

Both in the wild and inside, the Krimson Queen grows bigger than the Princess. The Queen can easily reach up to 7 feet (2.1 m) while the Krimson Princess tends to stay closer to 3 or 4 feet (0.9 – 1.2 m).

In the wild, Krimson Princesses can grow up to 18 feet (5.5 m), while the Queen can reach nearly 25 feet (7.6 m)! This height differential is largely due to their growth rate.

When you get a Krimson Queen, not only will they get much larger than a Krimson Princess, but they will also grow a lot faster. They are a very prolific grower while the Princess variety needs some time.

What Separates the Krimson Princess and Krimson Queen From Other Carnosa Varieties?

A lot of other Hoya Carnosa varieties don’t have the variegation that the Princess and Queen enjoy. This variegation is the white or pink coloring on the leaves. A lot of the regular Carnosa species have solid-colored leaves.

At most, the other varieties will have flecks of cream on their leaves, but nothing as extravagant as the color on the leaves of the Krimson varieties.

This variegation is what distinguishes the Krimson varieties as separate subspecies, and makes them different from other Hoya Carnosa varieties.

Are the Growing Requirements for the Krimson Princess and Queen Different?

The type of soil, humidity, and trimming requirements are the same for the Princess and the Queen, so it is easy to care for both variations in the same area.

However, there are also a few differences when it comes to preferred methods of care, primarily involving light, fertilizer, and water.

Since you can now tell the difference between these two plant varieties, you must also learn how to take care of them according to their different needs.

Since the Krimson Princess has a lot more white on its leaves than the Krimson Queen, it doesn’t process light as well. The green parts of the leaves contain the chlorophyll that is needed for plants to photosynthesize.

For this reason, the Krimson Princess needs to be in indirect sunlight longer throughout the day than does the Krimson Queen. 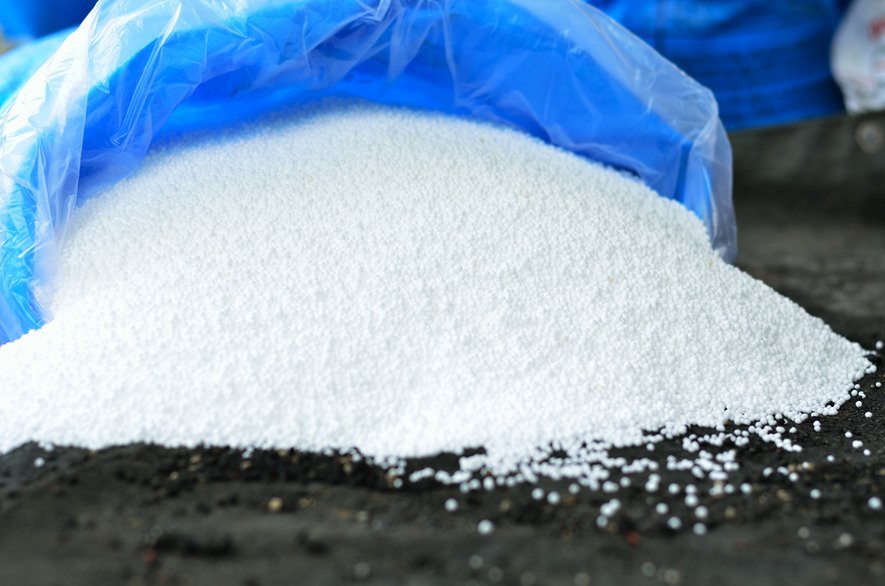 The Krimson Queen has thinner leaves compared to the Crimson Princess. While neither plant needs a lot of water and are considered drought-tolerant plants, the Krimson Queen does need a bit more water.

Usually, the difference is small, with the Krimson Queen only needing water a day or two earlier. This is because of their thinner leaves. Thicker leaves like those that adorn the Krimson Princess can hold more water, so it takes them a little longer to dry out.

Which Variety Is Rarer?

When looking around, especially online, you will notice that the Hoya Krimson Queen is more expensive when compared to the Krimson Princess. This might be surprising when you think about how the Queen grows faster and propagates more often, which in theory should lead to more supply, but in fact it is in higher demand.

This is especially true now due to the recent resurgence in indoor plants and the Hoya group of plants in particular. The Queen variety is also – arguably – much more stunning than the Princess, thanks to its darker leaves with creamy outer edges.

While the Carnosas Krimson aren’t the rarest of Hoyas, they still aren’t easy to find. All of the Hoya Carnosas are considered equally rare, and there isn’t much difference between the two Krimson varieties except when it comes to demand, with the Queen being harder to find because it is typically more desirable.

Now, if you want a truly rare Hoya, it is worth looking at Hoya Callistophylla. They are some of the rarest and most expensive Hoyas on the market right now.

Are Hoya Krimsons Princesses and Queens Carnosas, Tricolors, or Variegata?

The Krimson Queen is also known as the Hoya Tricolor. This is because not only does the Queen have leaves that are green with a white line along the outer edge, but they also produce leaves that are fully white, pink, or cream sometimes. These fun leaf varieties are what gave the Queen its alternate Tricolor moniker.

So as you can see, the Krimson Queen fits all three of the terms above: Carnosa, Tricolor, and Variegata. The Krimson Princess, despite its similarities to the Queen, only fits one of the terms: Carnosa.

If you start looking deeper, you may find there are still other terms used to describe the Hoya Crimson Queen and Princess, such as Exotica. You may be wondering if these are different varieties as well.

The basic answer is that they are all the same. There are slight variations that come from propagating parts of these plants until they have specific Hoya Crimson traits. At this moment in time, they aren’t considered a very stable variety and it takes a lot of work to even get the traits to show up.

For this reason, quite a few Hoya enthusiasts won’t acknowledge these varieties yet. However, as they become more stable, we may start to see more varieties pop up and start to circulate the Hoya scene.

Telling the difference between some varieties of plants can be very difficult. Thankfully, there are some distinct features unique to the Hoya Krimson Princess and the Hoya Krimson Queen, particularly when it comes to the color of their leaves, that make them easier to tell apart.

Once you know what to look for, you will be able to tell the difference between the two varieties very easily.