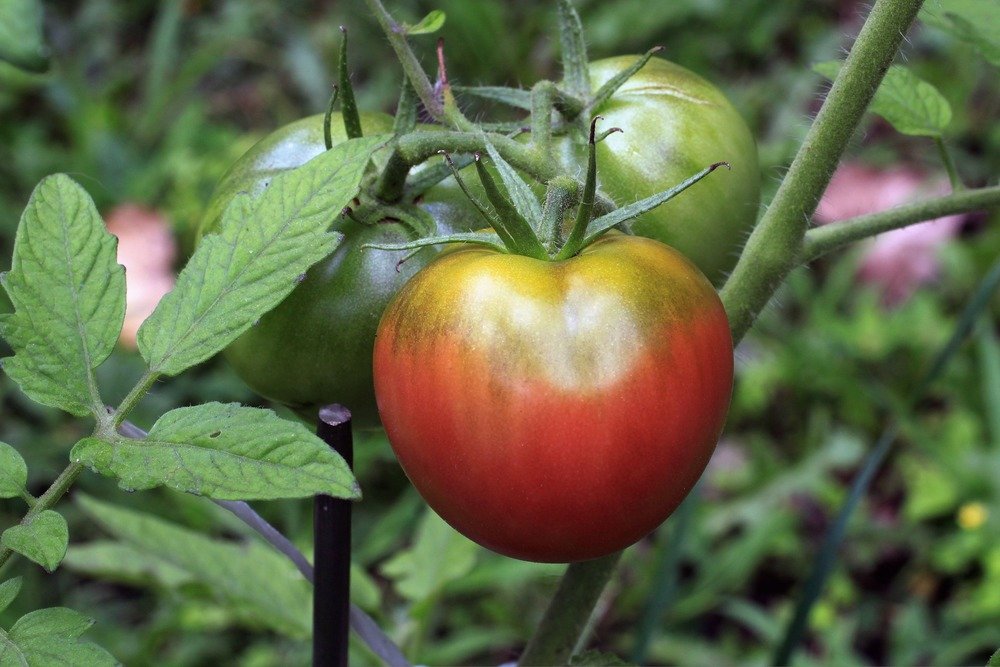 Tomatoes are, in our opinion, one of the most versatile fruits out there! They can be enjoyed raw in salads or cooked in sauces. Furthermore, they come in so many different varieties to suit any palette.

The Paul Robeson Tomato and Cherokee Purple Tomato are two unique heirloom varieties beloved for their sweet, smoky flavor. The two varieties have a similar appearance and even grow in similar climates.

Paul Robeson Tomatoes are notoriously sweet and smoky, with well-balanced acidity, while Cherokee Purple Tomatoes have a more earthy flavor with a subtle sweetness and less acidity.

Let’s look at these two classic heirloom tomatoes in greater detail to find out which is best for your garden.

Paul Robeson Tomatoes have red and black skin with bright red flesh. With a shape and size similar to a beefsteak tomato, it’s an excellent choice for sandwiches. This tomato is originally from Russia, so it grows and produces fruit until the first frost. This variety is a great growing option if you live in a cooler climate.

On the other hand, Cherokee Purple Tomatoes have more of a deep plum color and grow bigger than the Paul Robeson. This variety produces plenty of fruit, from mid-summer to the first frost. They are a vining (indeterminate) tomato, just like Paul Robeson tomatoes.

But the major difference between these two tomatoes is their flavor. Let’s take a look at their flavor profiles.

Paul Robeson Tomatoes are a cult classic for heirloom tomato lovers. For many, it is considered their favorite tomato.

This juicy beefsteak-type tomato has a smoky taste with a velvety texture. What helps it stand out is its distinctive balance of sweetness and acidity. This variety has an average medium-thick skin, so it’s easy to eat raw or cooked. Paul Robeson Tomatoes are perfect for salads, sandwiches, sauces, and even cocktail drinks. The versatility of this extremely palatable tomato has led to its popularity.

Paul Robeson Tomatoes have made such a name for themselves it can be challenging to get your hand on seeds. 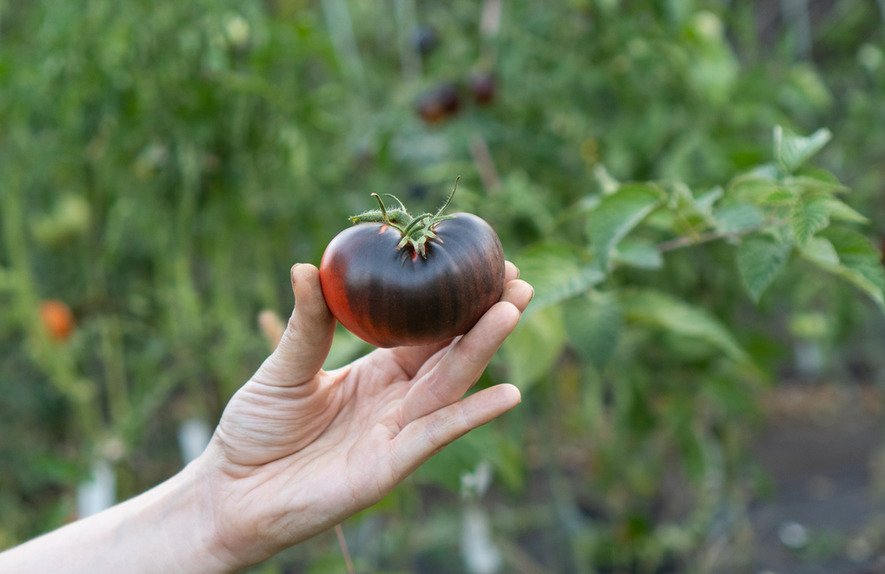 The Cherokee Purple Tomato has a long history and what some describe as an “old-fashioned” tomato flavor. Its flavor is deep, rich, and full of complexity. It is sweet, but not overly so. It also has a distinctive smoky, earthy flavor but less acidity than the Paul Robeson Tomato. Cherokee Purple Tomatoes also have thicker skin than Paul Robeson Tomatoes.

Gardeners usually grow this tomato to eat fresh, best enjoyed in salads, salsa, or just sliced with a sprinkle of salt.

How Did the Paul Robeson Tomato Get Its Name?

Paul Robeson was a Harlem Renaissance musician, performer, and activist. He is best known for his outspoken anti-colonial and pro-worker views.

So how did this prominent American figure end up as the name of a Russian tomato? During his life, Paul Robeson was sympathetic to the many Soviet Union and Communist causes, which led him to be ostracized by the American government. His music and films were removed from public distribution for a time, and his passport was famously revoked after a stay in the Soviet Union.

Although the exact origins of the Paul Robeson Tomato are unknown, we do know that Paul Robeson was a well-known and beloved figure in Russia. The name of this tomato is a tribute to his alliance with Soviet ideas of equality.

How Big Does a Paul Robeson Tomato Plant Get?

The Paul Robeson Tomato plant is known for producing lots of large, juicy fruit. This plant is indeterminate, which means it grows on a vine rather than a bush (determinate). This tomato must be propped up on a tree or other support structure as a vine plant. Otherwise, it will trail on the ground and attract pests and diseases.

Is Cherokee Purple an Heirloom Tomato?

Picture those bright red, perfectly round tomatoes you see at the grocery store. An heirloom tomato is pretty much the opposite of that.

Heirloom tomatoes are characterized by their unusual shapes, sizes, and colors. They’re a mainstay at farmer’s markets and restaurants. You’re not too far off if the word “heirloom” makes you think of antiques.

Heirloom tomatoes are grown from seeds passed on from season to season or sometimes down from generation to generation. Farmers and gardeners take the seeds from the best tomatoes of the year and save them, then plant them next season. The fruit might be chosen for its color, flavor, texture, or other desirable traits. This is why heirloom tomatoes are often thought of as superior in flavor by tomato enthusiasts.

Both Cherokee Purple and Paul Robeson Tomatoes are considered heirloom tomatoes. The seeds from Cherokee Purple Tomatoes ended up in the hands off chemist Craig LeHoullier in 1990. He was told that the seeds were from a once favorite tomato of the Cherokee. LeHoullier then popularized this tomato variety and made it what it is today!

Although this plant is slow to grow at first, it produces fruit quite rapidly once it’s established. Cherokee Purple tomato plants like full sun (6-8 hours a day minimum) and well-draining loamy soil. Their ideal temperature is between 65-85°F (18-29°C). They can handle moderate drought but should receive about 1-2 inches (2-5 cm) of water per week.

This tomato plant will start to produce in mid-summer and continue to fruit until the first frost. From the seedling stage, Cherokee Purple Tomatoes take about 80 days until they’re ready for harvest.

Should I Prune Cherokee Purple Tomatoes?

Since this plant is a vine, regular pruning will help make it more manageable in your garden. To train this tomato plant to be bushier, prune any suckers that grow the week after transplanting.

You can also prune this plant to help ripen fruit on the vine more quickly. In late summer and early autumn, head back to the plant to help it redirect its energy from growing new fruit to ripening the already existing fruit.

Are Heirloom Tomatoes Susceptible to Diseases?

There is a common misconception that heirloom tomatoes are more susceptible to diseases than commercially grown varieties. Luckily, this is not true!

The idea comes from the fact that commercially grown tomatoes like Beefsteak and Big Boy have been grown with disease prevention in mind. On the other hand, heirloom tomatoes are generally grown for their taste and appearance. The truth is that some heirloom varieties are susceptible to disease, while others have excellent disease tolerance.

For example, Rutgers and Cherokee Purple varieties are remarkably resistant to disease. Some heirloom tomatoes can be susceptible to fungal and bacterial diseases if not cared for properly. These diseases are commonly caused by excess water on foliage. Gardeners often grow heirloom varieties in a greenhouse for better control over environmental elements like rain and cold.

If you’re a tomato lover, heirloom varieties like Paul Robeson or Cherokee Purple should definitely be on your “to grow” list this summer! These historic tomato varieties have more complexity and richness than your traditional store-bought tomatoes and look beautiful.

Even though they have similar care needs and growth habits, these two heirloom varieties have minor but distinct differences in flavor.

Paul Robeson Tomatoes are a well-balanced variety with an equal amount of sweetness, smokiness, and acidity. This versatility makes them delicious, either cooked or fresh. Try growing both side by side and compare their flavors and textures yourself!