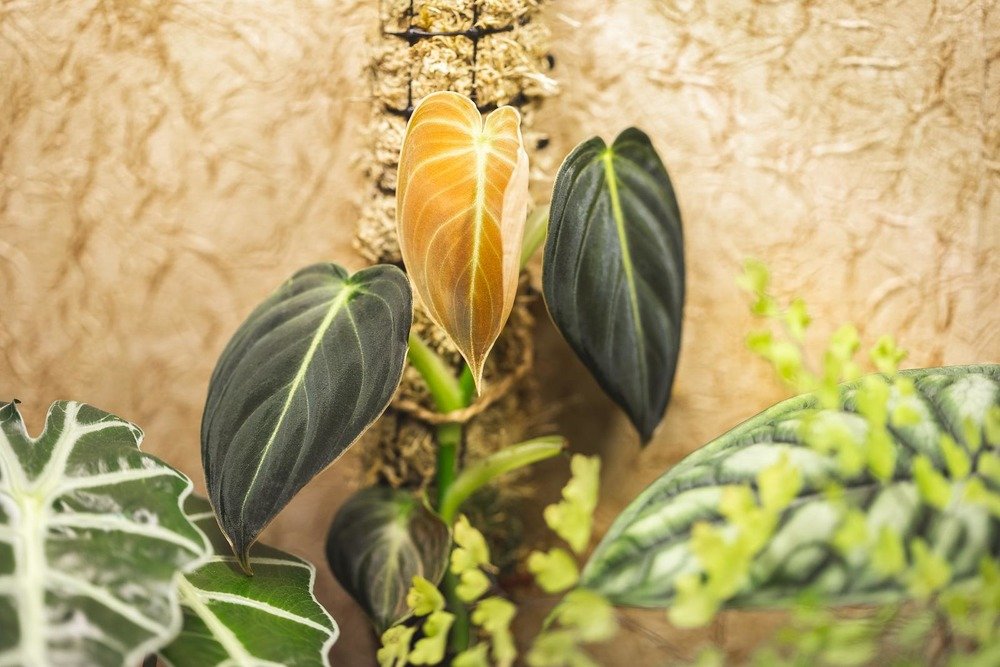 Some Philodendrons are easily recognizable from one another. For example, it would be hard to confuse a Philodendron Pastazanum with a Silver Sword Philodendron. On the other hand, some Philodendrons look so similar that there are only the slightest differences between the two.

Such is the case with Philodendron Gigas and Philodendron Melanochrysum. They are both long, heart-shaped Philodendrons that are climbers and have a dark green coloration. However, they do have some subtle differences.

What is the difference between Philodendron Gigas and Melanochrysum? 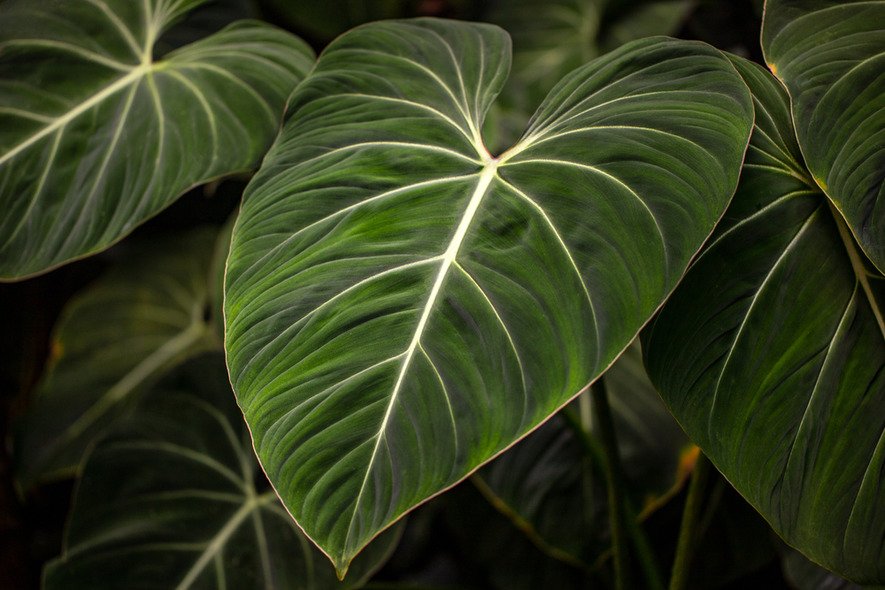 Because of their similar leaf shape and size, the Philodendron Gigas and Philodendron Melanochrysum look very similar. That isn’t their only similarity either. Both have velvety leaves and are climbing Philodendron.

Thankfully, they have some key differences as well. The Philodendron Gigas has more of an oval-shaped leaf, while the Melanochrysum has a slightly more heart shape.

Immature leaves are one of the easiest ways to tell them apart. Philodendron Melanochrysum has a dark green leaf that looks orange or copper in color when it starts growing. However, the Gigas begins with only a light green that darkens over time.

On the mature leaves, the Melanochrysum may have what almost appears to be gold flecks on the leaves.

Another great way to tell them apart is to look at the petioles. Gigas has petioles that look like they are a D-shape. The Melanochyrsum has a terete petiole.

To clarify, the petioles are the part where the leaf attaches to the stem. This little piece in a Gigas will be shaped like a D instead of fully rounded. This means they look like a half-moon, rounded on one side but flat on the other.

Terete petioles, on the other hand, look like crescent moons (or like someone took a bite out of a cookie). Most of the petiole is rounded, but there is a dip at the top.

How do you identify a Philodendron Gigas?

Philodendron Gigas is a relatively rare Philodendron found in Panama with rich green color, velvety texture, and light green veins. New leaves may be anywhere between a light green to olive color.

Some of the leaves can grow so dark that they almost look black. The leaves are considered oval.

How big can Philodendron Gigas get?

Philodendron Gigas are one of the largest Philodendrons. They can grow up to 65 feet (20 m) long. In planters, the plant doesn’t grow much longer than 8 to 10 feet (2.5 to 3 m). If you leave them as a hanging plant, they can easily be trailing along the ground in just a few years.

The leaves can get between 3 to 4 feet (1 to 1.2 m) in length. On top of that, this plant is fast growing and can triple in size in as little as a year.

Is Philodendron Gigas a slow grower?

Philodendron Gigas is not considered a slow grower. It grows very fast, just like most other Philodendrons. Most reports say that it can easily double or triple in length, especially in the first few years.

Despite how fast it grows, it doesn’t need repotting more than any other plant, as it can be repotted every two or three years when you start seeing roots coming out of the drainage holes. 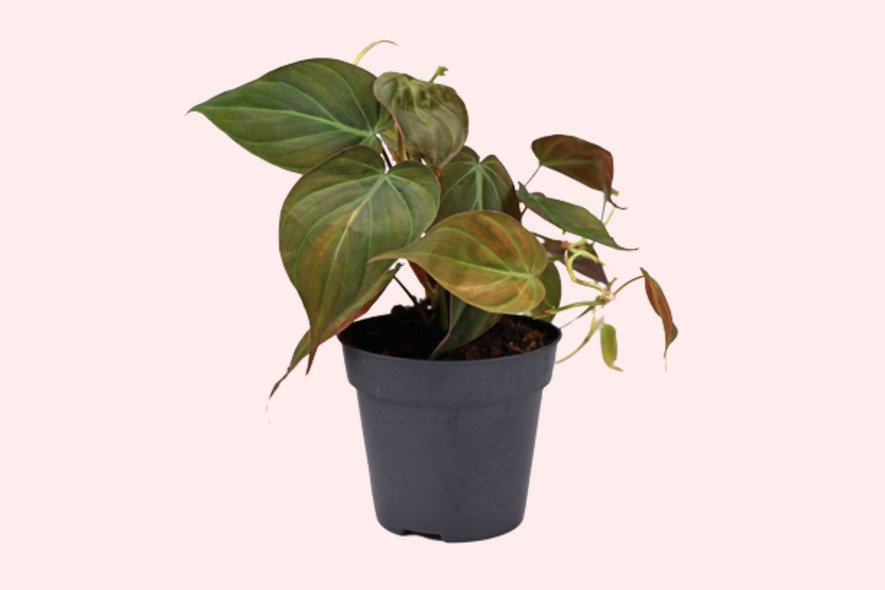 The Micans and the Gigas Philodendrons have velvety dark green leaves. However, they are pretty easy to tell apart. The Micans plant has vining structures while the Gigas doesn’t.

Also, the Micans are much smaller and have more heart-shaped leaves with a long, tapered point, unlike the oval-shaped leaves of Gigas plants.

How do you identify a Philodendron Melanochrysum?

Philodendron Melanochrysum is also known as Black-Gold Philodendron. They have velvet, heart-shaped leaves, though the hearts may sometimes be narrow and look like ovals.

These leaves are usually dark green with yellow veins. The leaves can get up to 24 inches (61 cm) in length.

This plant’s yellow veins are unique in how they run through the leaf. The veins also tend to look like crystals and appear like they have flakes of gold inside them.

Like some other Philodendrons, the Melanochrysum is a climbing Philodendron and does best with a moss or coir pole that it can attach to and climb.

It originates in Colombia, near the Choco and Antioquia provinces.

Why is Philodendron Melanochrysum so expensive?

Though they aren’t the rarest of all Philodendron, nor the most expensive, the Philodendron Melanochrysum is still pretty costly to some. Each plant can cost near $100 for a complete specimen and $15 for a small cutting.

When some Philodendron can sell for several thousand dollars, $100 doesn’t seem like much, but it is still a little more than most people want to spend on a houseplant.

The reason for this cost is due to two things. First, Philodendron Melanochrysum is rare. They can be hard to find and not the easiest to get cuttings from.

Second, they are high in demand. Due to their unique colors and scarcity, the demand for these plants has increased significantly in recent years. It is something to brag about and show off if you can get a Philodendron Melanochrysum.

Why are my Melanochrysum leaves so small?

Melanochrysum Philodendron doesn’t have small leaves by any means. They can easily get up to 24 inches (61 cm). So if your leaves aren’t growing close to that length, it is usually a sign that something is wrong with your plant.

Generally, smaller leaves mean that the plant doesn’t have enough nutrients to make the leaves bigger. To remedy this, you must ensure your plant is fertilized correctly. Liquid fertilizers are usually best and should be given in spring and summer.

When picking a fertilizer, try to find one high in nitrogen. You can fertilize your plant usually every two weeks during peak season.

Are Micans and Melanochrysum the same? 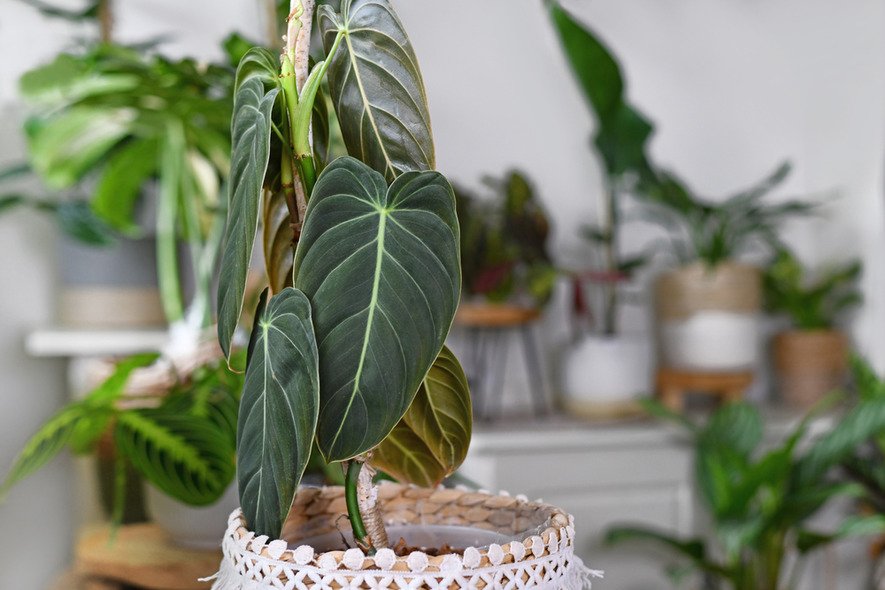 Mature Micans and Melanochrysum Philodendron are very similar in appearance. Both are heart-shaped and velvety. The leaf size is slightly different when they are mature. But it is close enough that it is hard to tell, especially if something is wrong with your Melanochrysum and it isn’t growing to the size it should.

However, that doesn’t mean it is impossible to tell apart. There are still some ways you can identify these two different plants. While Philodendron Melanochrysum is a climbing plant that does best with a moss pole, Micans are vining. These do well hanging on walls and spreading out.

The markings on the leaves can also be different. The markings can be anywhere from cream to white color on the Melanochrysum. They are also bolder and broader than those of the Micans. The variations for the Micans are narrow and the same color as the leaf.

Finally, you can tell them apart by their young leaves. The Melanochrysum leaves are bronze while unfurling and then turn green, with the front staying more green than the back, which leans towards black.

The Micans, however, start light green and become deep green as they mature. Sometimes, there will be red or maroon on the underside of the leaves.

Now that you know the differences between Philodendron Gigas and Melanochrysum, and some other similar Philodendron species, you are well on your way to becoming a Philodendron expert.

Knowing to look at minor differences, such as immature leaf colors and petiole shapes, can take you a long way toward identifying species that look very similar at a glance. A quick search can help determine what you should look for if you are ever in doubt.