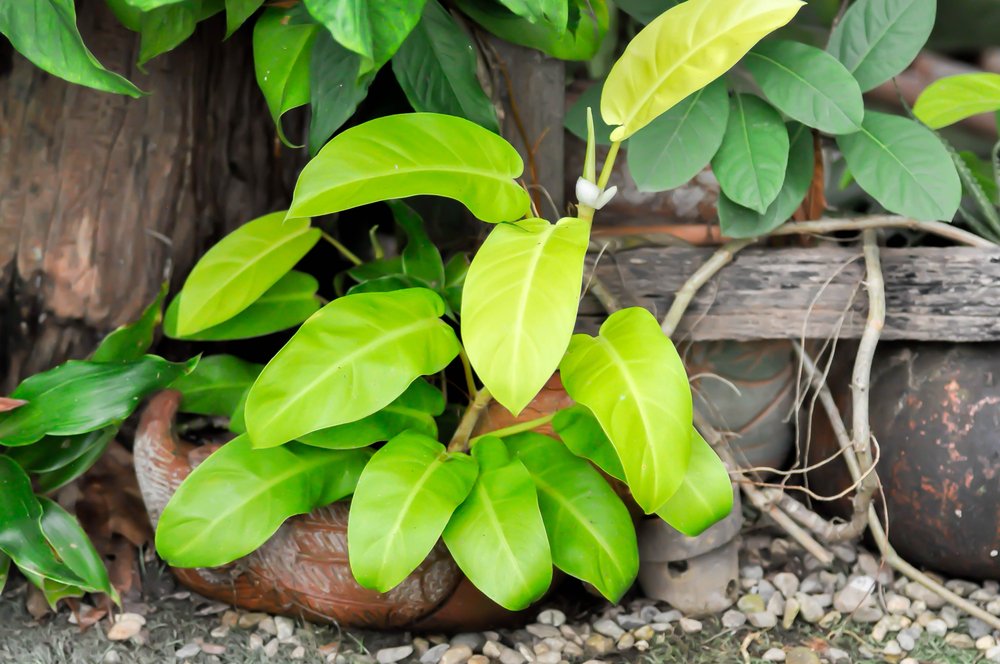 The eye-catching yellow-green leaves of these two houseplants make it easy to see why they’re so popular! Although they’re commonly mistaken for one another, Philodendron Lemon-Lime and Neon Pothos are two completely different species.

Despite this, their heart-shaped leaves, electric green color, and growth habits are remarkably similar. So how can you tell them apart?

The Philodendron Lemon-Lime has smooth, heart-shaped leaves that grow from cataphylls and it produces two to three aerial roots per node. The Neon Pothos has waxy leaves that unfurl from existing leaves and it only produces one aerial root per node.

Let’s look into these similarities and differences in better detail.

What is the Difference Between Philodendron and Pothos?

It’s hard to believe that two remarkably similar plants are a completely different species! Pothos are native to Southeast Asia but have become naturalized in places like South Africa and Australia. Philodendrons, on the other hand, are native to Colombia, Venezuela, and the Caribbean. So, they both come from tropical regions but in different areas of the world.

While Philodendrons are relatively harmless epiphytes, Pothos is considered invasive. If planted outdoors, Pothos is known to climb trees and strangle them with their vines. Pothos is actually considered an invasive weed in places like Hawaii and Australia!

These are some of the significant differences between these two species. But to tell them apart visually, you’ll have to look deeper at their leaves and stems and how they grow.

You will have a hard time if you’re trying to tell the difference between these two plants by color alone. But if you take a closer look at the three traits below, their subtle differences will become more apparent.

Although both plants have heart-shaped leaves, the heart shape of the Philodendron is far more pronounced. That’s because Philodendron Lemon-Lime is a cultivar of the more common “Heartleaf” Philodendron.

If you reach out and touch the leaves of both plants, you can also feel the difference. The Neon Pothos has waxy leaves with a bumpy texture. Philodendron Lemon-Lime has smooth, soft leaves that are thinner than the Pothos.

The growth habits of these two plants showcase their differences quite clearly. Watching a Pothos leaf grow, it “unfurls” from an existing leaf.

Philodendron leaves, on the other hand, grow from a cataphyll. Cataphylls appear along the vine of Philodendron plants, and they help protect new leaves as they grow. They eventually fall off on their own, or you can remove them yourself.

Since cataphylls are on Philodendrons but not Pothos, this is a key difference that will help you identify the two.

As epiphytes, both Neon Pothos and Philodendron Lemon-Lime have aerial roots. These roots appear along the stem to help the plant receive water and nutrients as it climbs.

If you look closely at Neon Pothos stems, you’ll see that the aerial roots only produce one root from each node. Philodendron Lemon-Lime, on the other hand, can produce aerial roots in groups of two or three. Note that Philodendron aerial roots are usually longer and skinnier as well. 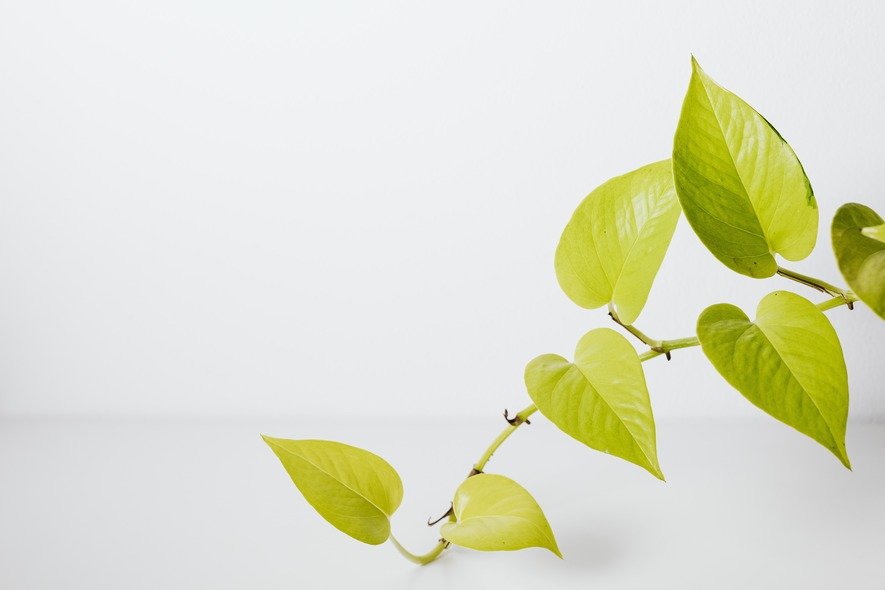 Neon Pothos, although adored by plant lovers, is not considered a rare houseplant. It can be found at most garden stores and nurseries. Rare Pothos species include Cebu Blue Pothos and Harlequin Pothos. Usually, these species can only be found at specialized plant retailers or online growers.

Although Neon Pothos on its own is not rare, some of its variegated varieties are highly sought after.

Yes, it can! Variegation happens when a plant’s leaf does not produce chlorophyll due to a genetic mutation. This causes the plant’s leaves to turn cream-colored, often with some interesting patterns. Block patterns, marbling, and pure white leaves are all possibilities.

How Do You Prune a Lemon-Lime Philodendron?

Pruning is a great way to shape your plant the way you like it and eliminate any leggy stems. Pruning also encourages your plant to produce new growth. You should regularly prune any dead or dying leaves from your Philodendron to help redirect your plant’s energy to new growth.

You can use a pair of pruning shears, scissors, or a box cutter to prune your plant. Whichever tool you use, make sure it is cleaned and sterilized first.

When pruning epiphytes, you should always trim just above the node on a stem. This will encourage your plant to produce new growth from the node. Don’t trim below the node because this will leave a long section of the exposed cut stem. These sections are prone to rotting, which can travel to and infect the healthy areas of your plant.

While you’re pruning your Philodendron Lemon-Lime, it’s always good to also wipe the dust from its leaves. Dust can impede the leaf’s absorption of light and prevent them from taking in oxygen.

And don’t let those stems go to waste! You can turn pruned plant stems into cuttings to propagate your plant. 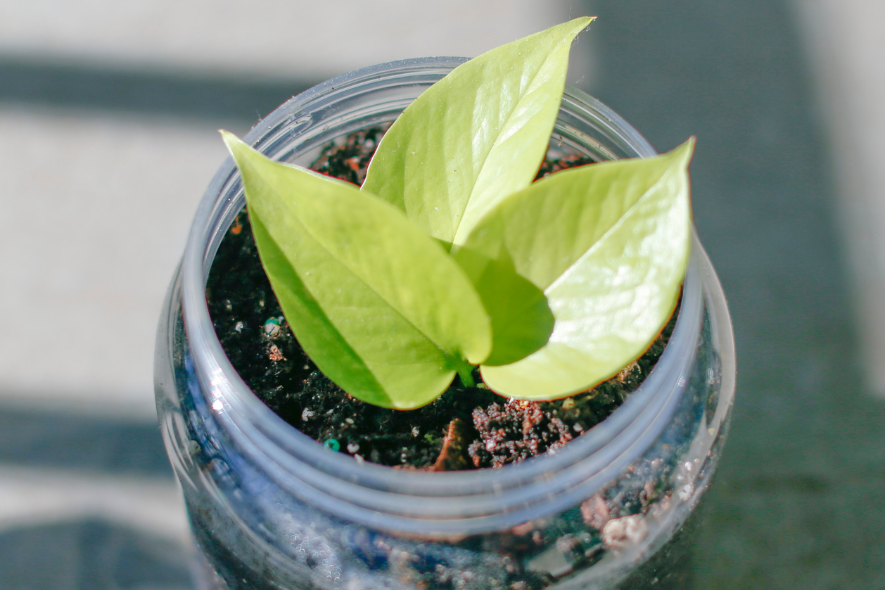 Propagating will create new plants from existing plants. This means that when the mother plant reaches the end of its life, you won’t have to buy another! Propagated plants also make great gifts if you have any plant-loving friends.

Pothos can be propagated in water or soil. For both methods, you need to take a cutting from the mother plant. Use sterilized pruning shears or scissors for best results.

Take a clean cut from the stem of your Neon Pothos, right above the node. Make sure the stem is healthy and not too young. Trim that stem down into several 1-inch cuttings. Each cutting should have a node with 1-2 leaves.

From here, you can root your Pothos, cutting right into the soil. Prepare a pot with moist soil, and bury the node beneath the top layer. Your cutting should begin to grow roots in about a month.

Alternatively, you can place the cuttings into a jar of fresh water. Ensure you leave the jar in a warm location in plenty of indirect light to stimulate growth. The cuttings get all the nutrients they need from the water, so no plant food or soil is necessary! Roots should begin to form in about two weeks. From there, you must let them grow at least an inch before planting them in the soil.

Can You Plant Pothos and Philodendron Together?

Grouping plants together is also known as “combination planting” in gardening. Plants tend to group themselves in the wild based on their living needs. For example, plants that need humidity grow near other plants that also need humidity.

Grouping houseplants together is mostly done for aesthetic purposes. Some plants simply help compliment each other’s looks and grow together in the same pot. Of course, it’s important that they also have similar care needs, or else it will be challenging to keep them happy.

Neon Pothos and Philodendron Lemon-Lime are both from the Araceae plant family and are tropical epiphytes. Their care requirements are very similar, and so they are the perfect candidates to group together in a pot.

And since both these plants are great air purifiers, they’ll work double time to keep the air in your house clean!

These two plants look so similar that it’s nearly impossible to notice their differences at first. As epiphytes, they both have similar growth habits. They’re both tropical plants, meaning their care requirements are similar.

The main differences between Philodendron Lemon-Lime vs. Neon Pothos are the shape and texture of their leaves, how their new leaves grow, and how many stems are produced via their aerial roots.

You will surely be happy owning either of these two brightly colored vine plants. Can’t choose between the two? Get both, and they’ll coexist happily in the same pot!