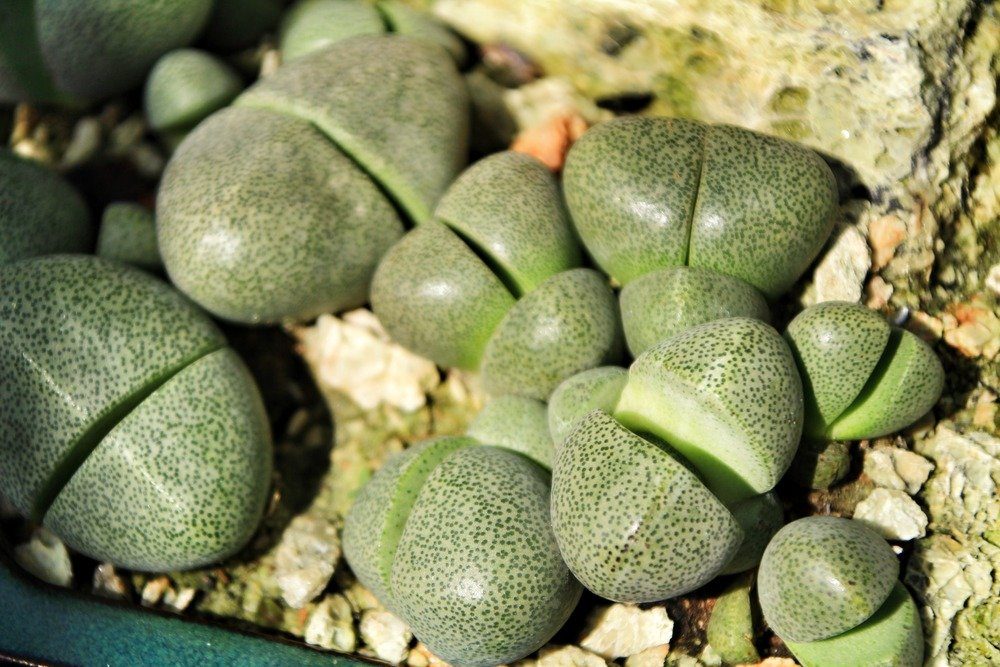 Both Lithops and Pleiospilos are unique, conversation-starting succulents that resemble living stones. The trouble is that they often get confused for one another because they are similar in appearance and care needs.

Understanding the differences between the two will help you navigate the nuances in their care requirements which will ultimately result in happier plants.

Of course, there tends to be some confusion, especially since both have acquired similar nicknames. Both plants are often called the “Split Rock” plant because while they tend to look different, they can resemble a rock split in half. Pleiospilos are referred to more commonly as the “Split Rock,” while the Lithops are most commonly referred to as “Living Rocks” or “Living Stones.”

Similarities Between Pleiospilos and Lithops

Since they belong to the same family, there are many similarities between them. Both Pleiospilos and Lithops are round, stone-like plants with a “split” down the middle. When they bloom, the bloom will emerge from that split. They will also develop new leaves from that split, resulting in older, outer leaves eventually dying off.

What is the Difference Between Lithops and Split Rock?

How Do You Identify Lithops?

Lithops are often called “Living Rocks” or “Living Stones” because they appear to be colorful rocks that have a split down the middle of them. The foliage for these plants is typically at ground level, growing only 0.5 – 1 inch (1.2 – 2.5 cm) tall and from 1 – 3 inches (2.5 – 7 cm) wide. The majority of the plant itself exists below the soil within its large taproot. Eventually, they will grow in small clusters.

It is a succulent plant as it thrives off of very little water and plenty of bright, indirect light. Depending on the particular Lithops species (nearly 40 different species and 140 different varieties), they can come in different colors and even have speckles or patterns on their stone-like foliage.

How Do You Identify Pleiospilos? 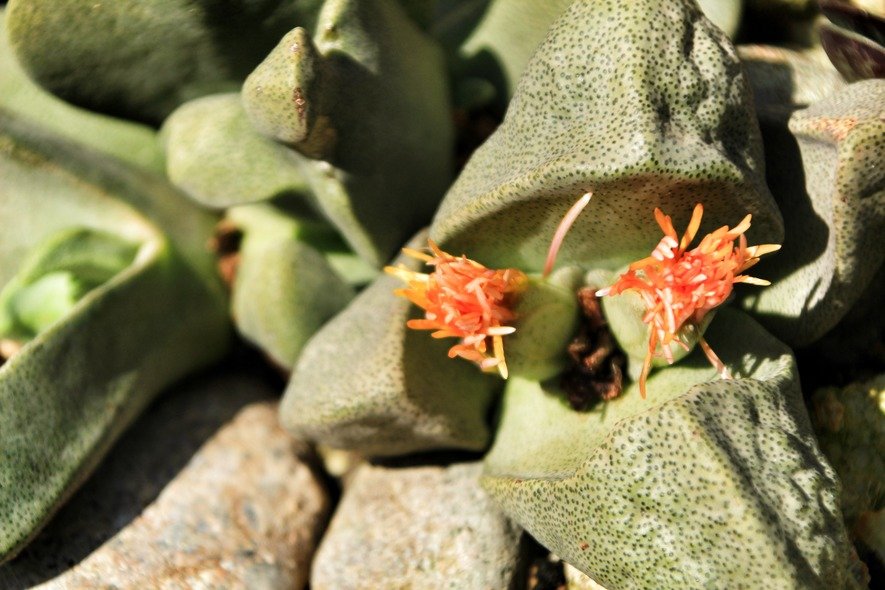 Pleiospilos sit slightly higher above the soil than Lithops, and their shape tends to resemble eggs. The fleshy leaves have a distinctly oval shape and are often gray-green (although some species are purple). While different varieties may vary, Pleiospilos also grow much larger than Lithops.

New leaves will grow at a 90-degree angle, which has earned them their nickname “Split Rock” because they tend to look like a rock split in half. Unlike the Lithops, which have a flattened surface, Pleiospilos tend to be much more rounded.

The most common variety of Pleiospilos is Pleiospilos Nelii. These tend to get confused for Lithops in their juvenile stage when they have very few leaves and are smaller in size. However, this Pleiospilos will grow 5 inches (12 cm) tall and 4 inches (10 cm) wide. This is, of course, much larger than the Lithops by comparison.

Lithops have an incredibly unique life cycle. Once the Lithops produce flowers, they will go dormant and begin to form a new “body.” The older outer leaves will gradually become wrinkly, dry, and thinner until new growth emerges. This is likely how they got their nickname “split rock” because the stone-like foliage will split when new growth appears.

It isn’t uncommon for a third set of new leaves to emerge before they finally shed their outer leaves. Pleiospilos’ outer leaves will start to soften and become sponge-like in texture before eventually dying off. Those leaves are less prone to wrinkling than the Lithops.

How Many Times Do Lithops Flower?

Lithops flowers resemble small daisies. Lithops will flower annually, and their blooms will open in the afternoon and close late afternoon and early evening. Lithops tend to have a unique bloom cycle as most varieties will bloom in autumn-winter.

However, some varieties will flower in the late summer or spring. If you supplement your Lithops with grow lights, you may find that it will bloom on a different schedule altogether because you are replicating its ideal conditions. 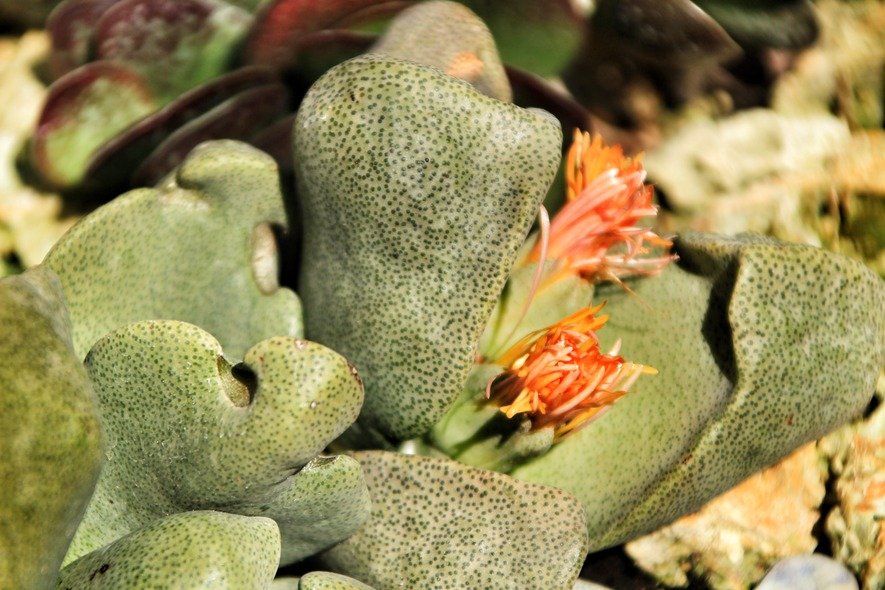 In addition, while Lithops tend to produce yellow or white flowers, many species of Pleiospilos (including Pleiospilos Nelii) have bright orange flowers.

Both Pleiospilos and Lithops require similar environments such as:

Make sure to place both Lithops or Pleiospilos in a sunny location where they can receive plenty of bright, indirect light. You can also grow both Lithops and Pleiospilos outdoors, as long as you bring them in during cold or rainy weather.

Both are from locations that rarely experience frost, so they are sensitive to cold temperatures and prone to cold damage. You will also want to keep an eye out for rainy conditions, as both are highly susceptible to overwatering and root rot.

Since they are both succulent plants, they can withstand long periods of drought as they store excess water in their plump foliage. Not only are they able to withstand longer drought periods than most houseplants, they prefer it. Unfortunately, both are highly susceptible to root rot so overwatering tends to be a struggle with these plants.

Lithops tend to be much more sensitive to overwatering than Pleiospilos, likely due to their size. In their natural environment, it is not uncommon for them to receive less than an inch of water each year. This is likely why many people struggle with overwatering their Lithops at home.

Many Lithops will receive their moisture from the humidity levels in the air, so make sure to water your Lithops infrequently. At a minimum, the soil should be completely dry, but it is best to wait even longer before watering your Lithops.

Pleiospilos should also completely dry out between watering and also can function with very little water. Therefore, give your Pleiospilos a good soaking when it is actively growing and only when the soil has completely dried out. It’s also best to refrain from watering during the winter when it traditionally receives less light unless you are supplementing with a grow light.

Pleiospilos and Lithops are both succulents that are similar in appearance. This can make it challenging to differentiate the two, and they can often be mistaken for one another.

Both plants have similar care needs, so once you determine which type of plant you are dealing with, the better you can care for your particular plant.