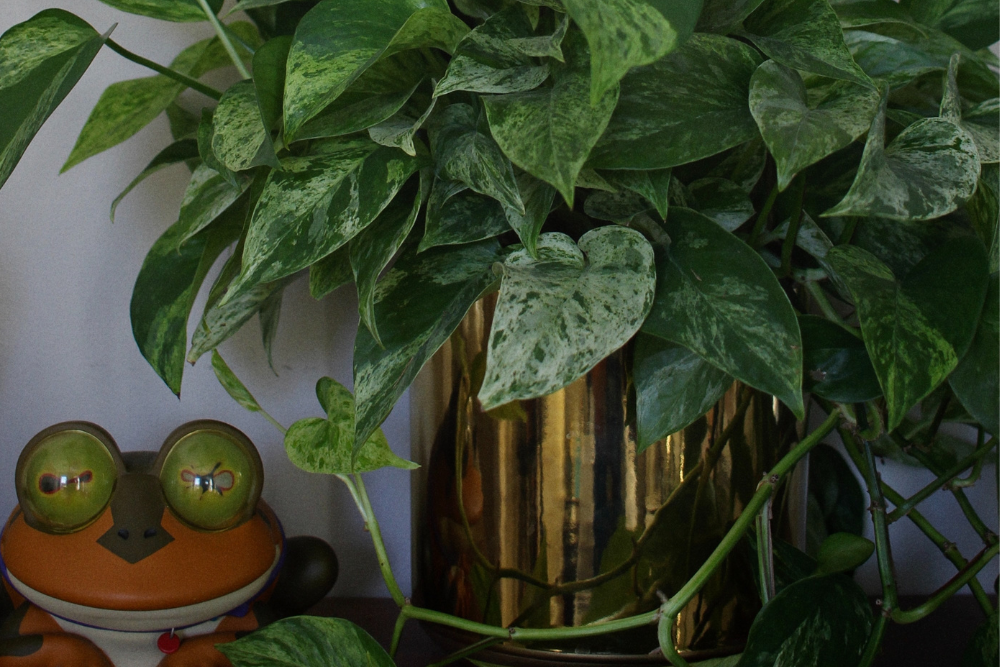 However, we now know that isn’t true, and each group is part of its own genus with plenty of species underneath them. However, due to their similarities and often misclassification, it can be hard to tell apart these two plants.

Thankfully, there are a couple of easy ways to tell these two plants apart, just by looking at the leaves and petioles. Pothos have smaller leaves with no cuttings on them and a c-shaped petiole while Monsteras have lobed leaves full of holes and cuts and a rounded petiole.

Is There a Difference Between Pothos and Monstera?

Pothos and Monstera can be difficult to tell apart. They both have the same preferences in their habitat, and there are so many varieties that you cannot generally make a comparison.

However, there are two ways you can tell them apart. The first is leaf size. This isn’t helpful when looking at one plant most of the time. However, if you have two and know that one is a Monstera and one is a Pothos but can’t remember which is which, then you can compare the size.

Both get to massive sizes in the wild, reaching up to 6 to 10 feet (2 to 3 m) long. Grown indoors, the plants tend to be much smaller. Still, Monstera generally has the bigger leaves.

Another way to tell, which we find the easiest, is perforations. Monsteras are fenestrated on their leaves, which is a fancy way to say the leaves have holes and slices. This is why they are often referred to as Swiss Cheese plants. Unfortunately, this only works with more mature plants, as younger Monsteras don’t always have the fenestrations.

Unless damaged, Pothos should not have any holes or cuts, especially when growing indoors. If in the wild, they may have slight fenestrations, but nothing major. Additionally, Pothos tend to have a lot of variegation, with white, yellow, or light green patterns across their leaves.

You can check the stems or petioles if you want to look closer at the plants. With Pothos, the petioles are often shaped like a “c,” similar to a celery stalk. Meanwhile, Monstera usually has thick, rounded petioles. 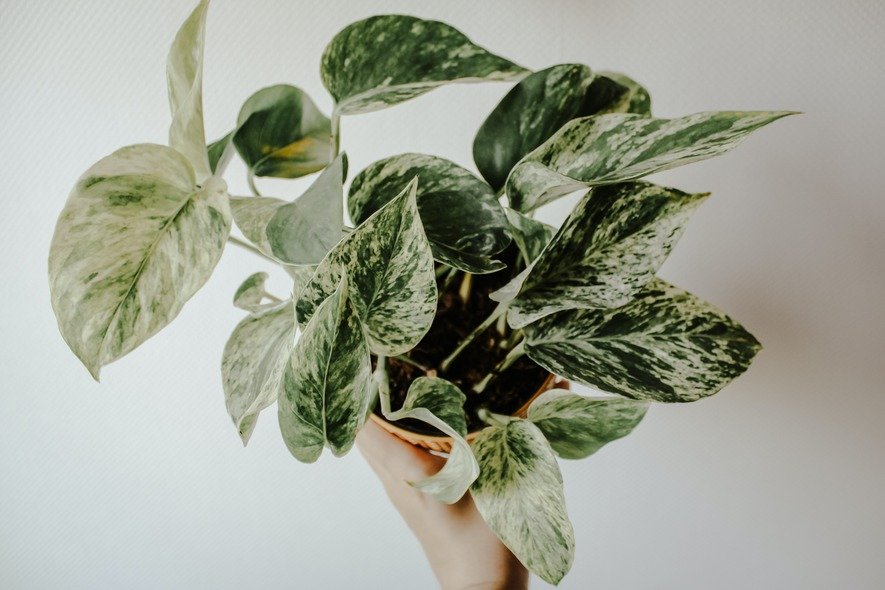 A Pothos plant is generally about 6 to 10 feet (2 to 3 m) in length, with leaves that don’t often get much more than 10 inches (25 cm) long. The leaves are always heart-shaped, though a bit more of a pointed heart than a rounded one.

Finally, most of the species of Pothos out there that are commonly grown indoors are generally some shade of green. If they have variegation, it will generally be a white, yellow, or pale green.

Are Devil’s Ivy and Pothos the Same Thing?

Devil’s Ivy is a different name for Pothos. It is a common name given to the plant because it is practically impossible to kill. Even when Pothos are left in the dark and neglected, they continue to live and stay green.

Due to their stability, they are often also invasive, as they can grow quickly and spread out far, easily reaching over 60 feet (18 m).

Do All Monsteras Have Holes?

All species of Monstera have the potential to have holes. However, young plants will often not develop holes. Your plant will usually have to be at least a year old before it will start fully producing holes and cuts in the leaves.

Additionally, if your Monstera is not getting enough sunlight, the splits and holes may not develop as you expect.

Is a Mini Monstera a Monstera?

Despite the name, a Mini Monstera is not a Monstera. They are plants in the Araceae family but do not fall under the same genus. Mini Monsteras are also sold as Philodendron Ginny, but they aren’t Philodendrons either.

They are a Rhaphidorphora, specifically a Rhaphidophora tetrasperma. Despite their similar looks, these plants are found in different parts of the world. They are often found in Southern Thailand and Malaysia instead of Central and South America.

Is a Monstera a Type of Pothos?

Monstera is not a type of Pothos. In the past, they have both been confused for types of Philodendrons but are, in fact, each their own genus, which has many different species. They are all in the same family, but that is where the connection ends.

Can You Put a Pothos and Monstera Together?

While there is a slight difference in fertilization needs between Pothos and Monstera, they overall have very similar needs, including light, water, and soil. They make excellent companions in a shared space or the same pot.

Pothos vs. Philodendron vs. Monstera

With all the variation, it isn’t always easy to tell Pothos, Philodendron, and Monstera apart. There are no hard and fast rules, and variations may sometimes come in and cause a problem.

However, you can get a general idea of the differences between the three plants.

Out of these three, the Philodendron and Pothos are the hardest to tell apart. Once you understand that mature Monstera have cuts and holes in them naturally, they become easier to tell apart.

Unfortunately, as they are all three in the same family (Araceae), they can still be challenging to tell apart, especially with younger plants. Additionally, there is a Philodendron that does get lobes in the leaves.

These leaves generally aren’t as heart-shaped as the Monsteras and are less smooth and rounded. It almost looks like something ate the leaf, rather than it being naturally that shape.

Philodendrons still have heart-shaped leaves. However, their leaves tend to be a bit wider than their length, making the heart shape seem shorter and squat rather than narrow and pointed. Also, the dip at the top where the petiole attaches is cut out, creating a more realistic heart shape at the top.

Monsteras have heart-shaped leaves as well. They usually have a big divot on the top of the leaf, making them look a little closer to Philodendrons. However, Monstera still has the largest leaf size.

If you want to take it further, Philodendron and Monstera have a rounded petiole. A Pothos has a petiole more in a c-shape, kind of like celery.

Finally, another good way to tell them apart is with new growth. Philodendrons usually have their leaves wrapped up in a cataphyll, a sheath-like structure. Most varieties also have new growth that is slightly pink or yellow.

Meanwhile, Pothos and Monstera have just the leaf that slowly opens up over time. The leaves are generally still green but may be lighter than mature growth. This is more noticeable in Pothos than Monsteras, though Monsteras are generally a little lighter in color.

Due to a long history of misclassification that is still going on, it can be hard to tell apart certain genera and groups of plants. Pothos and Monstera are two of those that are often confused for one another. Once you know the differences, it can be easy to tell them apart.

Pothos tend to have smaller leaves than Monsteras, and when looking at older plants, most Monsteras have lobed leaves full of holes and cuts, while Pothos have no cuttings on their leaves. Another distinct difference is the shape of their petioles: Pothos plants have a c-shaped petiole while Monsteras have a rounded petiole.

Generally, Pothos, also known as Devil’s Ivy, is smaller with more solid leaves and variegation. Monstera is larger and is often referred to as Swiss Cheese plants because their leaves are full of holes.