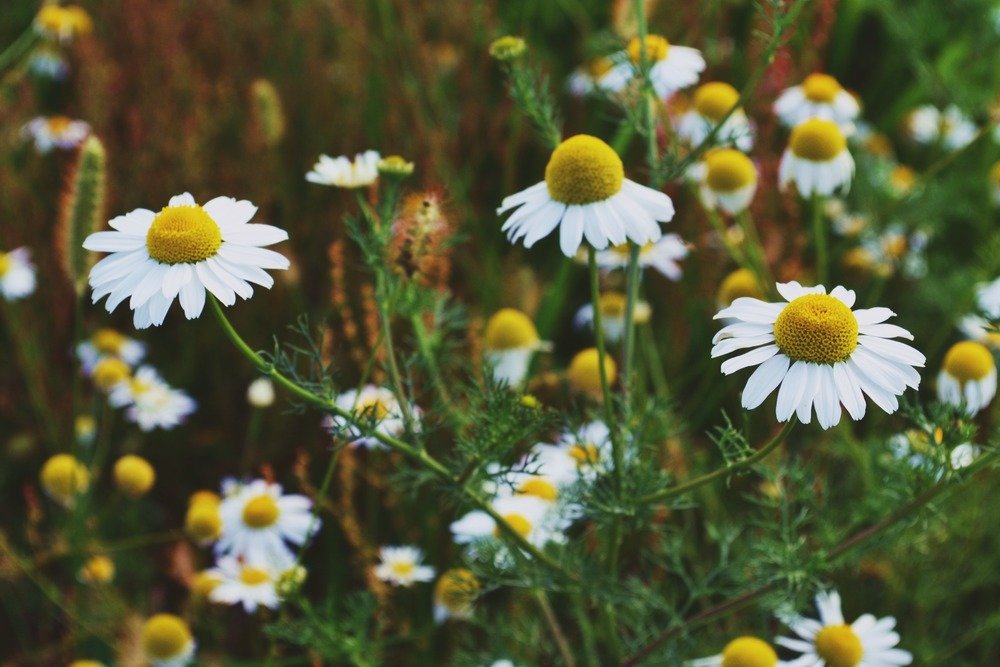 Chamomile flowers are best known for their calming aroma and medicinal use. Over a million cups of Chamomile tea are consumed every day! Chamomile is a common wildflower in Europe and Asia, where it grows natively.

In North America, you can often see Chamomile growing in pastures and on the sides of roads. Although there are only 25 species in the Chamomile genus, there are dozens of flowers in existence that look and grow just like Chamomile.

Some plants that look like Chamomile are harmless, but others have poisonous traits or are incredibly invasive.

You should avoid these plants that look like Chamomile: false Chamomile, known to spread and destroy crops; scentless mayweed, which invades grain fields; and mayweed, which is toxic and poses a threat to grazing horses, cows, and dogs.

We’ll look at why these flowers should be avoided in your garden and how to identify these lookalikes from true Chamomile.

German Chamomile is the type of Chamomile used in teas and essential oils. It is often planted in residential gardens for its pleasant aroma and medicinal uses. This daisy-like flower has many lookalikes, most of which are invasive or toxic. But because there’s so much overlap between their appearances and common names, it can be difficult to tell these plants apart. Some common weeds that look like Chamomile include:

Let’s take a closer look at each of them.

False Chamomile is in the Asteraceae (sunflower) family, just like German Chamomile. This plant produces daisy-like flowers similar to Chamomile but has no smell. It is a short-lived perennial that blooms in summer and reproduces quickly via seed. Each plant can produce up to 300,000 seeds!

False Chamomile likes to grow in ditches, crop fields, and pastures. It offers little nutritional value to livestock, so it’s considered a weed to farmers. Because of its high reproduction rate, it can take over pastures and choke out valuable grasses.

False Chamomile has a fibrous root system that makes it incredibly hardy in wet soils, so flooding years result in an invasion of this plant. The best solution to prevent false Chamomile from taking over fields is to mow regularly to prevent seed dispersion. Hand-pulling and sowing alfalfa seeds have also proven effective. 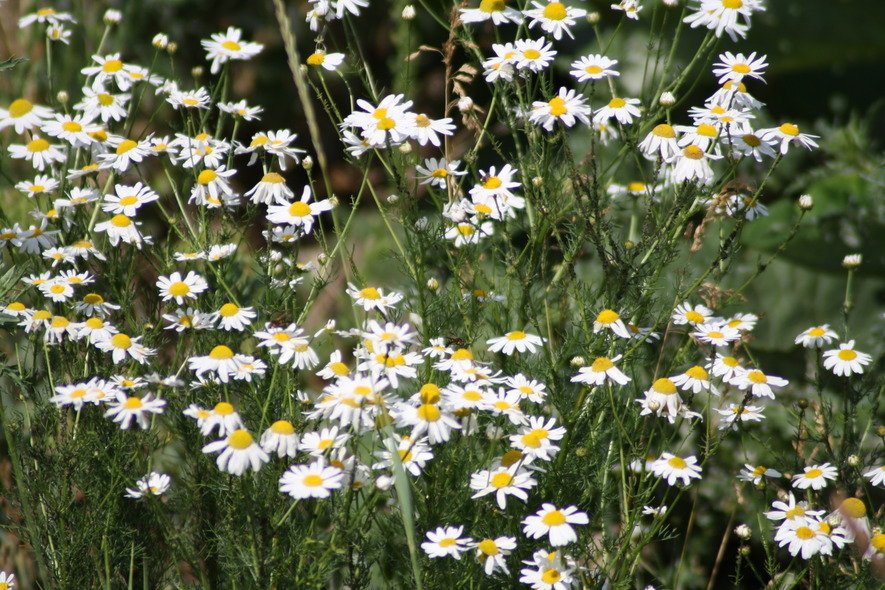 Scentless mayweed is native to Asia and Europe but has made its way to North America via trade. It prefers cultivated areas like farmer’s fields. It is considered a noxious weed in states like Washington and is well-known in the prairies as a grain crop weed. Studies have shown that scentless mayweed can reduce wheat yields by 0.9 to 11 percent per unit weed density.

Scentless mayweed seeds are spread through water, human trade, and contaminated agricultural equipment. It’s a weed because it is tolerant of mowing and can resist many herbicides.

Although its name suggests otherwise, scentless mayweed does have a slightly unpleasant odor, which can help distinguish it from German Chamomile. Scentless mayweed can be identified by its white petals, which droop as the plant grows bigger. It also has distinct feathery green leaves.

Another name for anthemis cotula is stinking Chamomile, referring to the unpleasant odor emitted by this plant. This plant releases allelopathic chemicals that prevent other plants from growing and allows mayweed to form in clusters.

Although stinking Chamomile is related to German Chamomile, it has practically no medicinal benefits. Touching the plant can result in contact dermatitis. If the leaves are crushed, they can cause blisters on the skin.

Since mayweed tends to grow in fields and pastures, its presence is a concern for grazing animals. Horses, dogs, and cattle are susceptible to mouth sores and skin rashes from consuming this plant. There are also reports that the milk from cows and goats who have ingested mayweed has an unpleasant odor and taste.

Mayweed has a very similar appearance to scentless mayweed. It grows in clusters with dozens of flowers per plant. The leaves are hairy and anywhere from 3/4 to 2 in (2 to 6 cm) long.

German Chamomile has a pleasant smell and is often planted in gardens or indoor pots. German Chamomile seeds produce plenty of flowers, making them an excellent ground cover for gardens. The plant doesn’t require fertilizer to grow and even tolerates full sunlight.

Unlike noxious Chamomile look-alikes that are perennials and pop up yearly, German Chamomile is an annual. Seeds must be planted every year in order for flowers to grow. They aren’t considered invasive since they die at the end of the growing season. They also don’t have any toxic traits, so they’re not a concern for grazing livestock.

How Do You Stop Chamomile From Spreading?

Chamomile look-alikes are notorious for taking over crops and pastures. Many of these flowers produce thousands of seeds per plant, so reproduction is rampant. Plants like false Chamomile can flower just 58 days after germination.

The best management strategy is to get on top of invasive Chamomile plants before they can produce flowers and seeds. Spot treatment via hand pulling or spraying pesticides can be successful. Mowing fields before the plants can flower is another successful tactic farmers use.

Are All Types of Chamomile Edible?

Chamomile look-alikes that shouldn’t be eaten include plants in the Anthemis genus. They often taste terrible or come with a foul odor. Examples include Anthemis cotula and Anthemis arvensis.

What Are the Benefits of Chamomile Flowers? 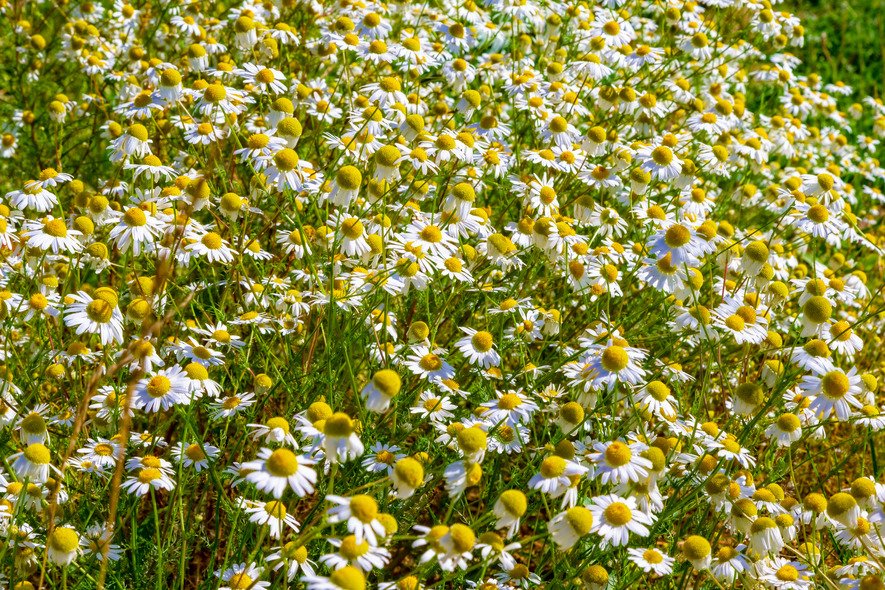 Dry Chamomile flowers are used for a variety of medicinal purposes. Studies have been done to show that Chamomile tea provides the following benefits:

Chamomile oil extract is a popular essential oil that promotes relaxation and reduces stress and anxiety.

Although bugs may seem like unwanted visitors to your garden, there are beneficial bugs that help gardens thrive. The scent of Chamomile attracts bugs like ladybugs which help eat pests like aphids. Chamomile serves as an excellent companion plant for vegetables for this reason!

Can I Plant Lavender and Chamomile Together?

You can plant these two flowers near each other in different pots, but they aren’t compatible to grow together in the same garden or container.

Keep in mind that Chamomile is not compatible with mint plants. Chamomile prevents mint from producing its highly scented oil. This can affect the smell of mint and its flavor.

Some flowers resembling Chamomile can wreak havoc on fields and pastures if left unchecked. False Chamomile, scentless mayweed, and mayweed are all Chamomile imposters considered invasive by farmers. Mayweed, in particular, has toxic properties that cause contact dermatitis and can ruin the flavor of cow and goat milk.

Hopefully, this guide helps you tell these invasive lookalikes apart so you can keep them away from your yards and animals!