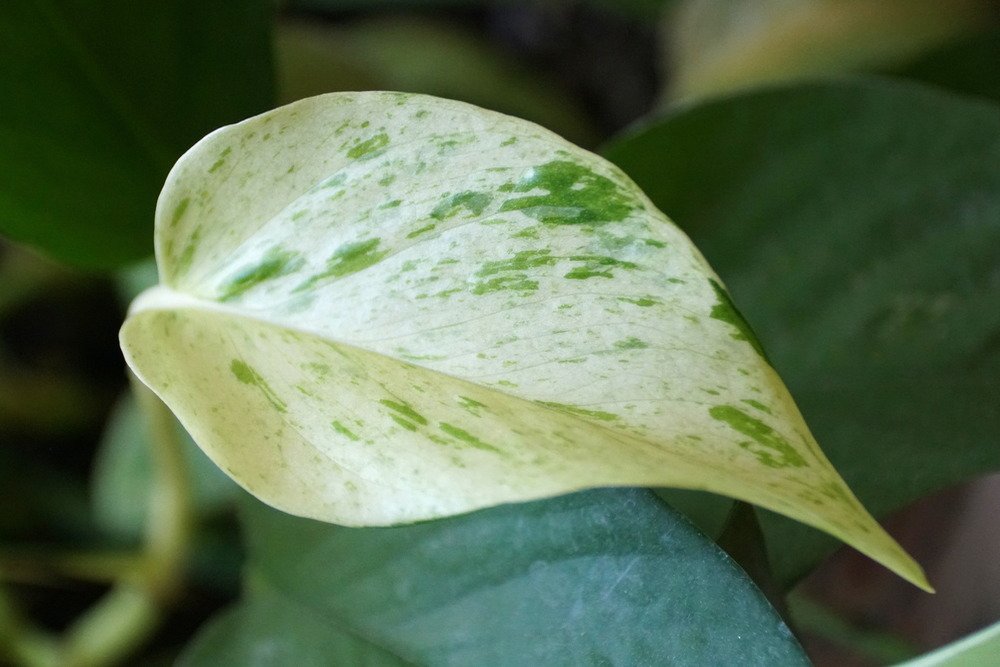 With so many Pothos species out there, it is easy to start getting the different species and variations confused. The Snow Queen and the Marble Queen are often mixed up. While not as dividing as some other species, some people still wonder if these two variations are the same species or not and what their differences are.

Despite what some people say, they are different variations and cannot turn into each other. However, they have similar care requirements, so if you can’t tell them apart, don’t worry, they can be treated the same regarding habitat requirements and care.

Are Snow Queen and Marble Queen Pothos the Same Plant?

Both plants look similar at a glance, however the Snow Queen and Marble Queen Pothos are not the same. Once you learn their differences, you will see that they are entirely different plants and can tell them apart easily.

Even though they are different types of Pothos, their care is very similar. That means that even if you aren’t sure which Pothos you have, you can treat them the same and not have any problems. They can even grow in the same pot together.

Although the Snow Queen and the Marble Queen Pothos have more differences than similarities, their similarities are bigger and more apparent. If you don’t know what to look for, it isn’t easy to tell these plants apart at a glance.

Snow Queen and Marble Queen are both Pothos species. They are considered varieties of Epipremnum aureum. Additionally, both are considered variegations because they have a lot of white on their leaves and stems. Finally, they both have very similar heart-shaped leaves.

That is most of their similarities. However, as you can see, these similarities are the most obvious. When you look at a plant, you typically see the leaves first. 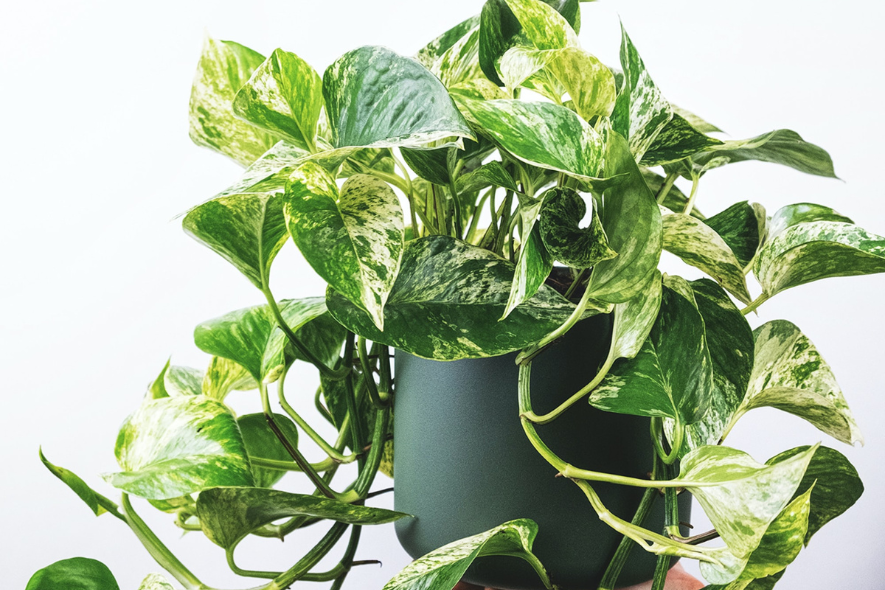 There are key differences to help you tell apart the Snow Queen and Marble Queen. It will be hard to tell which one your plant is unless you have both right next to each other, but there are some comparisons you can use, even if you only have one of the above variegations.

Although the Snow Queen is shorter, it grows faster than the Marble Queen. This means that Snow Queens need a little more attention and care than their Marble counterpart.

Marble Queen tends to have a creamier color on their patches, whereas the Snow Queen usually has a more white color. Snow Queens also have mostly white leaves with just a little green, while Marble Queens have a healthy mix of cream and green.

Finally, the Snow Queen’s leaves are a little more pointed. Marble Queens have a softer tip on their heart, making them a bit more rounded on the end.

So while there are more differences than similarities between these two Pothos, these differences are subtle and are usually a little harder to tell apart when you don’t have both varieties growing next to each other.

However, no matter where the confusion comes from, the Snow Queen Pothos does exist. Some arguments exist, but most people agree that the Snow Queen exists and is solidly different from the Marble Queen.

Can a Marble Queen Become a Snow Queen?

Even if they look very similar and have similar growing conditions, they are not the same plant. Changing one plant’s habitat won’t magically turn it from one variegation to the other.

Can You Mix Different Types of Pothos Together?

When planting, Pothos can be placed together, even if they are different species. Most Pothos have the same habitat and care requirements, so as long as they have enough space that they can all grow together, they don’t mind sharing a pot or space with other Pothos.

This allows you to mix all sorts of variations, colors, and shapes of Pothos to create a beautiful, eye-catching piece.

Why Is My Marble Queen Not White?

First, it is important to note that Marble Queens are not Snow Queens. This means that they will not be pure white color. Instead, the variegated parts will be creamy white or light green. Additionally, a Marble Queen rarely has a leaf that is a solid light color. They will usually have some mix of both cream and green.

To ensure that your plant is getting that creamy white color that makes a Marble Queen unique, it needs plenty of sunlight. Without the right amount of light, the Marble Queen will tend to be mostly or entirely green.

Although plants that have already formed cannot change color, if you move your plants to get more light, the new growths should be more of a mix of green and cream.

Additionally, if you want to keep that creamy white color, cutting off leaves that don’t have the level of variegation can encourage your plant to produce more variegated leaves.

The Marble Queen is pretty stable, so it shouldn’t convert completely to green if given the proper care. However, sometimes it does happen that a plant, including Marble Queen, loses its variegation.

Why Is My Snow Queen Pothos Not White? 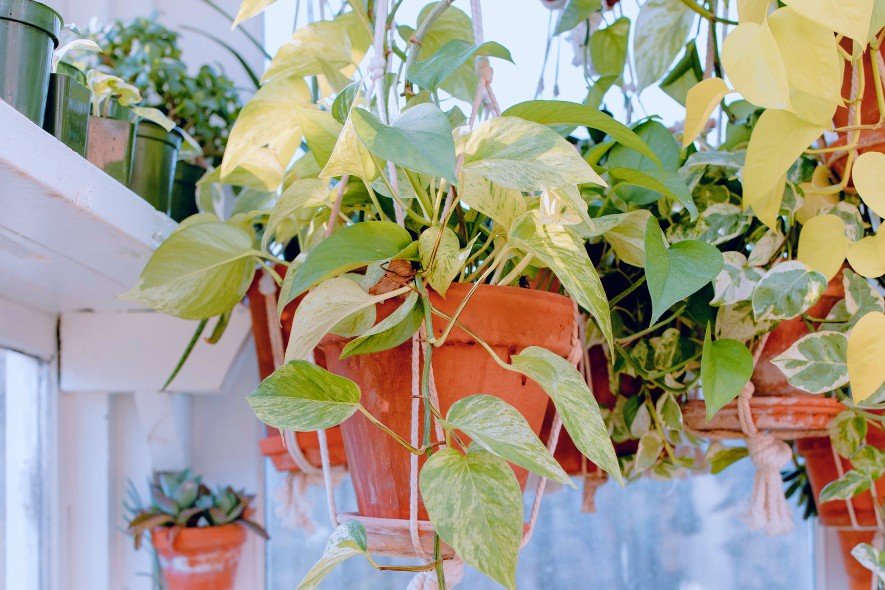 Like Marble Queens, Snow Queen Pothis need a fair amount of light to keep their white coloring. While they don’t do well in direct sunlight, a lot of bright, indirect light is good.

Usually, a southern-facing window with a sheer curtain over it is the best place to put this plant. Otherwise, you can put it in an eastern-facing window, so it gets mostly the softer morning light.

However, if your plant isn’t getting enough light, its new growths will be more solid green. Leaves that have already grown cannot change their color, but if you want the subsequent new growth to be more white, make sure your plant has enough sun.

Snow Queens can have solid white leaves depending on their variegation and amount of light. However, it is more common to have a more white leaf with just a little bit of green on each leaf.

Just like with the Snow Queen, they may look similar at a glance, but there are some easy differences to let you tell these plants apart easily. Usually, Manjula leaves are textured and aren’t as smooth or waxy as a Marble Queen’s leaves.

The Manjula leaves have a mix of white, cream, and green, whereas the Marble Queen only has cream and green. The patterns on the leaves are also different. Marble Queen usually has more speckled patterns of green and cream.

On the other hand, Manjula Pothos has more streak-like colors. These are long strips of every color rather than short spots.

There are many different kinds of Pothos, and many look very similar. Take the Snow Queen and Marble Queen, for example. They have very similar names, similar patterns, and coloring on their leaves but are different variations of Pothos.

Despite their similar names and coloration, Marble Queen and Snow Queen Pothos are two different variegated species of Pothos with a mix of light variegated color and green in splotchy patterns; however, their coloring and size tend to be different.

The best way to tell them apart is their coloration. Snow Queen tends to have less green on each leaf; the lighter color is more of a solid snow white. Marble Queens have a reasonably even mix of green and light colors, which is more cream or light green than white.