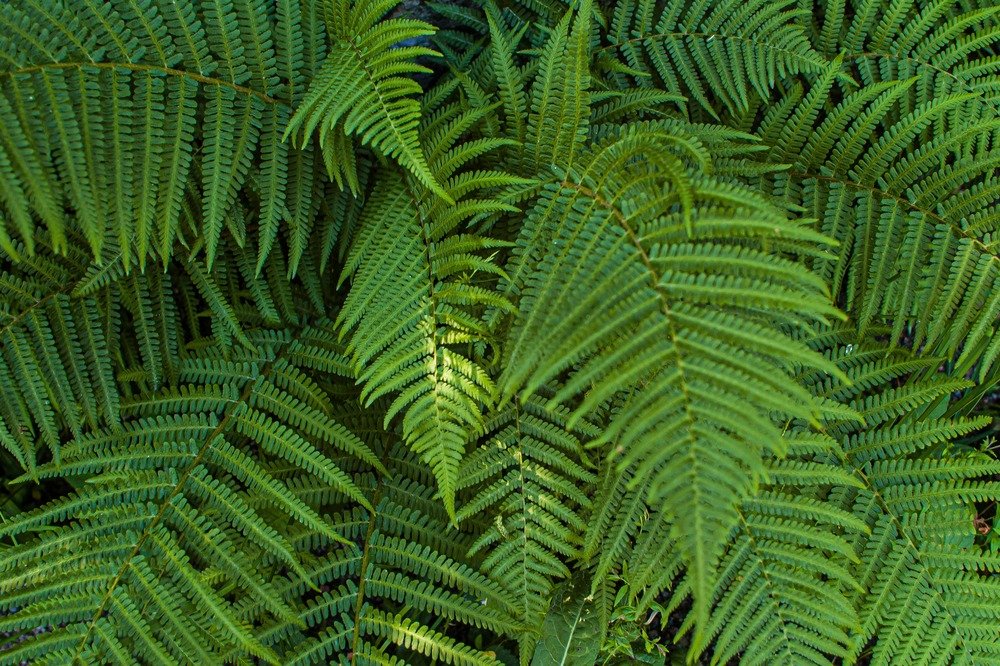 There are a few differences between the Kimberly Fern and the Boston Fern. The Kimberly Fern grows upright with stiff, coarse fronds, enjoys indirect sunlight, requires water once per week, and is best suited to a planter on the ground. The Boston Fern grows outwards with soft, droopy fronds, enjoys full shade, requires watering twice a week, and is best suited to a hanging planter.

How Do You Identify a Kimberly Fern? 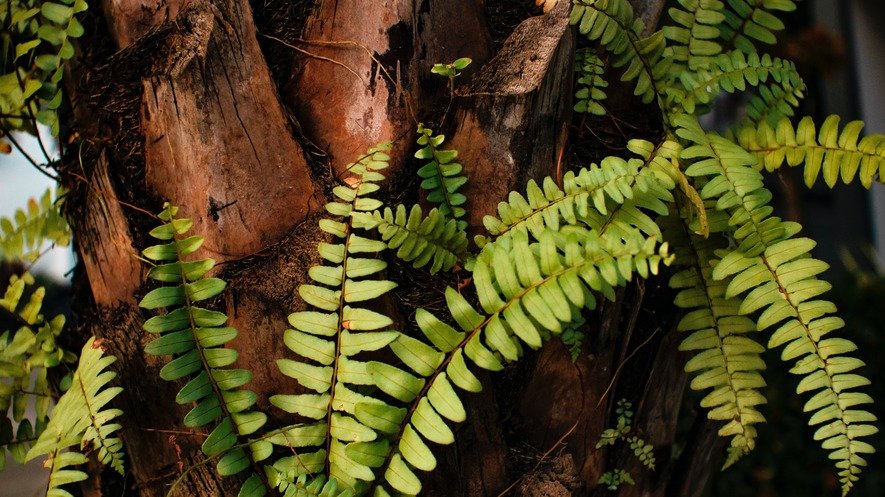 Kimberly Ferns are identified by their upright fronds that differ in appearance from traditional Boston Ferns. They are sometimes called Kimberly Queen Ferns because their vertical leaf posture gives the illusion that they are superior to other types of ferns whose fronds grow outward.

Because they are less sprawling than other fern varieties, Kimberly Ferns can seem more compact. However, the fronds of a healthy Kimberly Fern can reach 3 feet (0.9 m) in height and spread a hardy 3 feet (0.9 m) as well. That means a fully grown, thriving fern can take up a good bit of space!

While these tall fronds shoot upright from short, hairy sprouts, they can grow slowly, even in the best of conditions. It is not uncommon for Kimberly Ferns to take a couple of years to reach maturity– and thus their full height.

Factors such as too much sun, too little heat, or too much water can hinder a fern’s growth rate. But do not let that scare you from trying your hand at cultivating a sophisticated Kimberly Queen Fern– they are not terribly delicate. Monitoring components such as heat, shade, and moisture can allow you to course-correct once a problem is identified and you should be able to enjoy these sophisticated beauties for a long time!

How Do You Identify a Boston Fern?

Boston Ferns are of tropical origin and are easily identified by sword-shaped fronds that grow outward rather than upward, draping over their containers. This type of fern shows off best in hanging planters rather than sitting in stationary planting pots on the ground.

There are many variations of Boston Ferns, including the Golden Boston, Rita’s Gold, Florida Ruffle, and Dallas. All Boston Ferns thrive in warm, humid conditions but cannot tolerate much –if any– direct sunlight. All Boston Ferns need moist soil to grow healthy fronds, even though they grow slowly.

What Is the Difference Between a Kimberly Fern and a Boston Fern?

The texture of their fronds differs, as well. Kimberly Ferns have coarse, stiff fronds, whereas Boston Ferns have softer, more delicate fronds. This feature, along with its growing shape, can make Boston Ferns seem more full and lush.

Both of these fern types prefer shade, but the Boston Fern cannot tolerate as much sun as Kimberly Ferns can – they require full shade. They both like warm, humid weather and can thrive year-round indoors, but can only grow year-round outside in growing zones 9-11. Although they are both ferns and have very similar requirements, the Kimberly Fern is slightly more heat resistant than the Boston Fern.

Where Did Kimberly Queen and Boston Ferns Get Their Names? 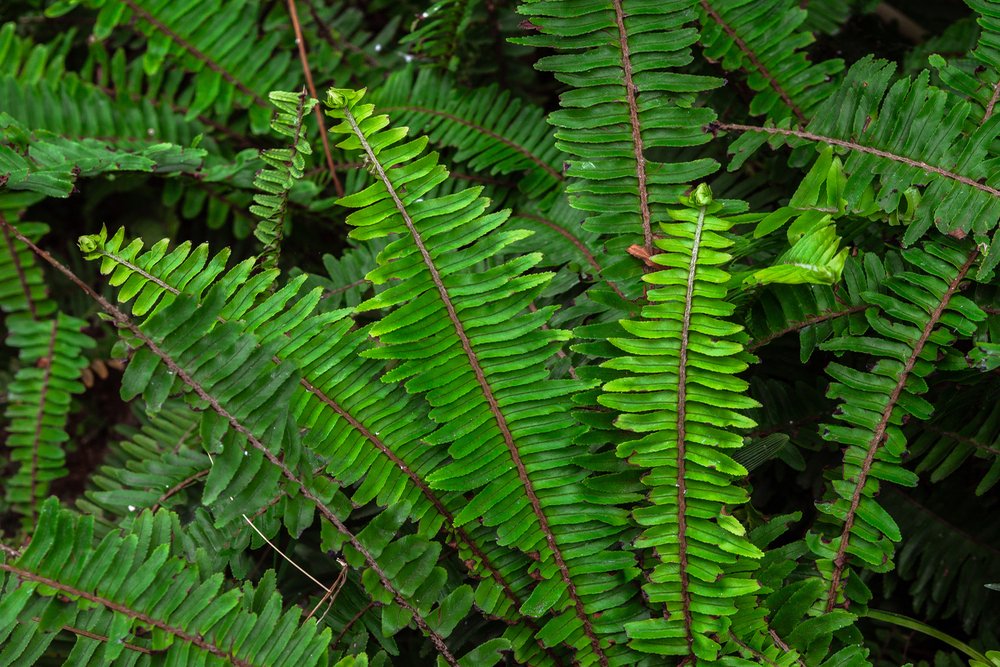 The Kimberly Fern is named after the region in which it was discovered– Kimberly, Australia. It may have also gotten the moniker “Queen” from its regal, upright appearance which makes it seem as if this fern is reigning over the other plants in the garden.

Originating in South America, Boston Ferns are not native to the city of Boston. However, they were discovered by New Englanders when a shipment of these ferns arrived in Boston from Philadelphia.

Kimberly Queen Ferns are versatile plants that can be grown both indoors and outdoors. Kimberly Ferns are favorites for many gardeners in the summer months because they thrive in warm humidity. This fern also performs beautifully in traditional planters, punctuating porch steps and shaded garden beds.

Boston Ferns grow beautifully in hanging planters. Boston Ferns also have properties that can improve humidity in dry indoor spaces. Bringing them indoors during the winter months is a great way to provide much-needed moisture in the air.

Both Boston Ferns and Kimberly Queen Ferns purify the air of harmful toxins through a process called phytoremediation. Some of the toxins they absorb from the air can include formaldehyde, xylene, and toluene. This cleansing feature can make ferns a great addition to home health as well as home beautification.

What Is the Difference Between a Kimberly Fern and a Sword Fern?

Remember, Sword Fern is just another name for Boston Fern. They have different shaped fronds and levels of drought resistance. The Boston Fern needs to be watered twice a week while the Kimberly Fern can go up to 7 days without water.

Can the Kimberly Queen Fern Be a Houseplant?

Because Kimberly Ferns prefer warm shade, they also perform well in sunrooms, screened-in porches, and anywhere they have an indirect source of light from a window. They can only thrive outdoors year-round in growing zones 9, 10, and 11.

A benefit to bringing ferns inside during the winter – or keeping them inside year-round – is that they function as a natural air purifier. In addition to providing oxygen to the household, ferns can eliminate many harmful toxins from the air by filtering gasses through their roots and leaves.

How Do You Care for a Kimberly Fern? 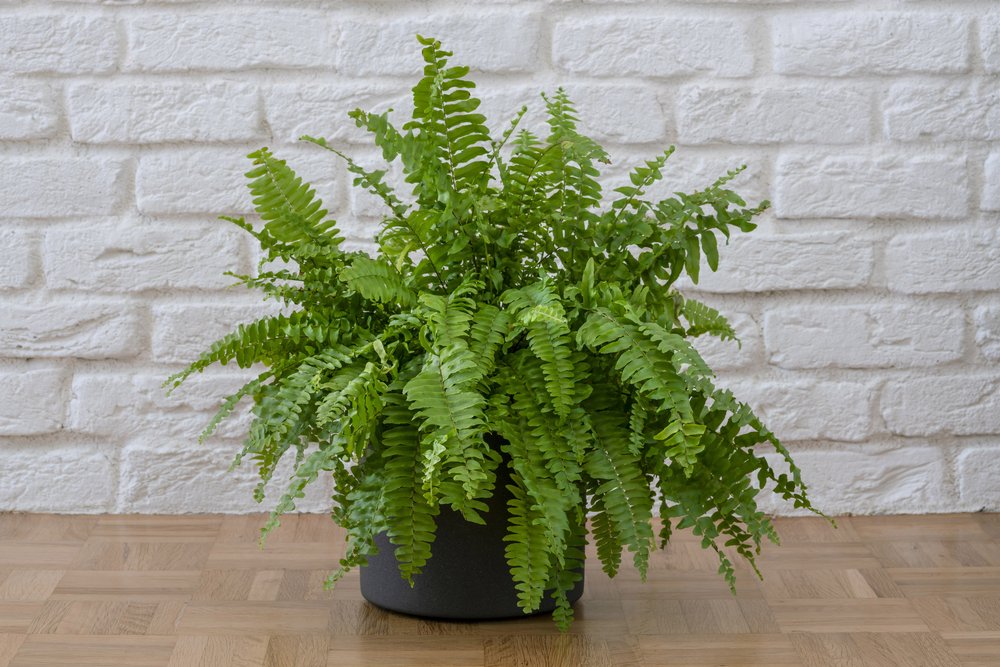 The Kimberly Fern’s main requirements are warmth, humidity, moisture, and shade. Keep the fern in an area where it will receive indirect sunlight such as in a room with plenty of windows and warm afternoon sunshine. Even though the Kimberly Queen Fern is relatively drought tolerant, it needs a drink of water approximately every 10 days. Monitor the soil regularly, and if the dirt feels dry, give it water more often. Ensure that the container has proper drainage so that the fern does not become waterlogged.

Ferns may benefit from a yearly fertilizer, but they do not typically need to be fertilized more than once annually. If you choose to fertilize your Kimberly Fern, do it in the spring at the onset of the growing season and avoid administering fertilizer in the autumn. Slow release fertilizer with a balance of 10-10-10 may work best.

The Kimberly Queen Fern is native to Australia, making it more heat and drought-tolerant than many other fern variations. They still prefer medium to warm temperatures that do not drop below 60°F (15°C). Kimberly Queen Ferns thrive in humidity, making them a popular choice in the southeastern U.S. which is famous for its summer humidity.

Even though it is a tougher species, the Kimberly Queen is still a fern, meaning it cannot tolerate much direct sunlight. These ferns thrive on covered porches, sunrooms, and northern-facing yards with plenty of afternoon shade.

Ferns make gorgeous, lush additions to any shaded area. Their beauty and relatively low maintenance have ensured their favored status in homes, sunrooms, and shaded porches for centuries.

Cultivating ferns indoors can improve air quality and promote an overall sense of well-being. Even though they grow slowly, their robust and elegant stature often provides a finishing touch to any space.

While there are some slight differences in how Kimberly Ferns and Boston Ferns should be maintained, if you keep their soil warm and moist and their fronds shaded, you should be able to enjoy either one and their benefits for several years.