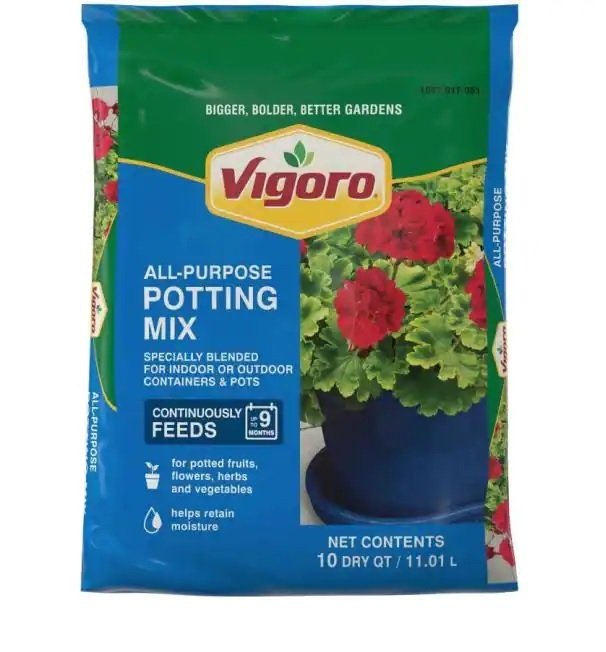 As a gardener with at least a couple of growing seasons under the proverbial belt, it can be hard to step away from your traditional gardening practices. When you find something that works, you don’t want to move away from that. This is often the case with potting mix, as it can already be hard to find a good brand.

However, sometimes things go wrong or you have to change brands, or maybe you are new to gardening. Perhaps you’ve seen Vigoro Potting Mix in your recent searches, and want to know if it is trustworthy.

Vigoro is not the top brand of potting mix, but for the average plant, it works well. All that is required is the addition of perlite, vermiculite, or peat to help with aeration. Vigoro Potting Mix is very cost-effective which makes it a great option if you are on a budget.

Keep reading to learn more about Vigoro Potting Mix, as well as get some common questions answered about both soils and mixes.

What is Vigoro Potting Mix?

Vigoro Potting Mix is a mix that is available in regular stores, and can be found almost everywhere you would go to get materials for your gardening. They have a few options, including specialized soils and mixes for those that need them. The Vigoro potting mix contains humus, manure, compost, and peat moss.

This mix has a lot of slow-releasing fertilizer that can last either three or nine months, depending on the bag you buy. This makes it an excellent choice for new gardeners that need a bit of help or guidance. 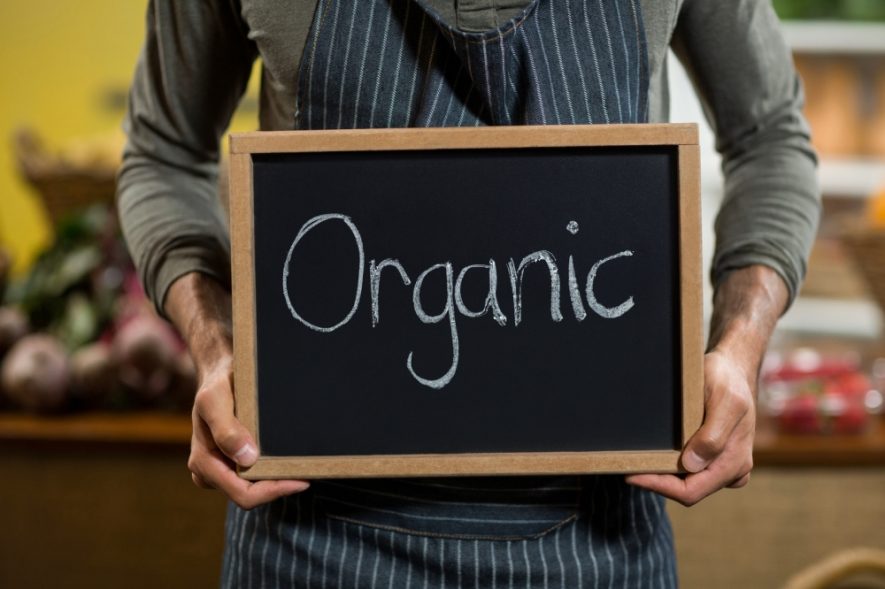 Vigoro soils and mixes are not completely organic. However, they do have an organic line. If you are specifically looking for an organic product, make sure you get the Vigoro bags that have “organic” on their labeling.

Since it is a whole line, it should specifically say “Organic Vigoro Soil” or “Organic Vigoro Mix”  as the brand name. If you don’t see organic in their brand name, it is very likely that it is their non-organic line.

How Do You Use Vigoro Garden Soil?

Vigoro Garden Soil is soil that anyone can use, whether a beginner or an experienced gardener. The bags come with instructions on how to use the soil and how much you will need. The same is true of their mixes.

One thing we noticed when reading reviews from others that had used the product, was that it is a very dense soil. Both Vigoro’s garden soil and potting soil tend to be on the heavier side.

For this reason, a lot of people recommend using perlite with this soil. Perlite helps to make sure water gets drained out of the soil instead of sitting. For the most part, if you are adding perlite to the soil, you want to have a blend of about one part perlite to five parts soil mix.

In the potting mix, however, there is already perlite, so you don’t need to add anything else.

One great benefit of their garden soils and mixes is the fact that it uses a time-released nutrient system. You don’t have to worry about adding nutrients to the soil as their nutrient requirements will be met and they can be mostly left alone. Depending on the Vigoro product you buy, it may release nutrients for three or up to nine months.

Is Vigoro Potting Mix the Best? 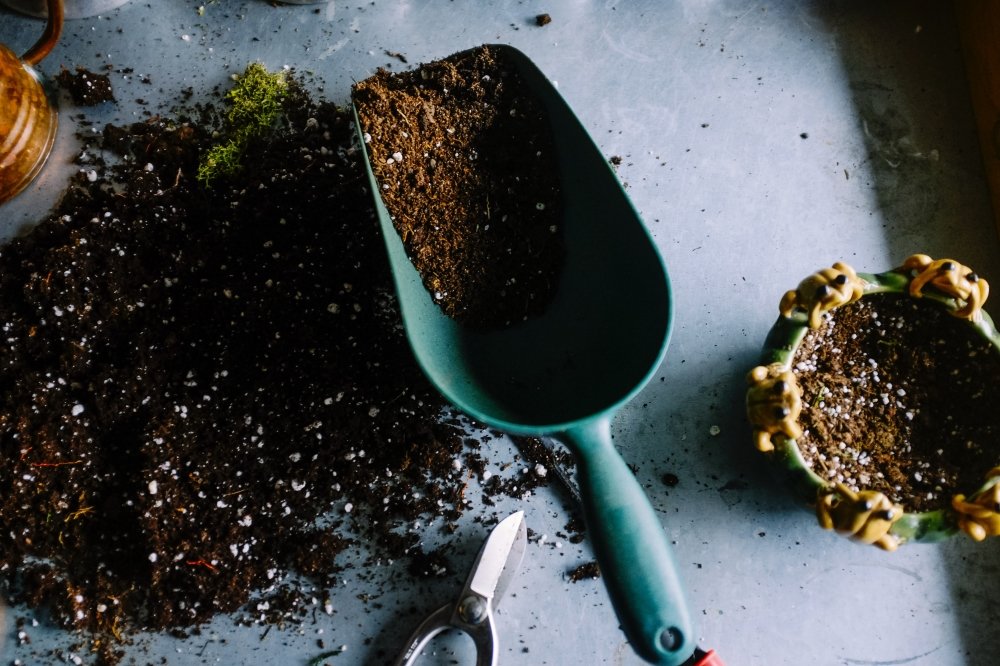 We wouldn’t say that Vigoro Potting Mix is the best. We’ve noticed it tends to be dense so that there isn’t enough air in the soil, which could affect your plants’ ability to thrive. Most potting mixes include ingredients to help with aeration that Vigoro is missing.

However, it is a fairly cheap brand. To increase aeration, you only need some perlite, vermiculite, or peat. To buy both of these and mix it is still a much cheaper option than some other good potting mixes.

So if you are trying to start gardening on a budget, it isn’t bad soil, but it needs some work to make it a good one. Also, it does have time-release fertilizer, so you don’t really have to worry much about your plants and their nutritional needs for the first three or nine months, depending on what your bag says.

This is good for first-time gardeners who aren’t quite sure what they need to do yet. In fact, it is often highly recommended for new gardeners because of the price and the slow time release. It is also easy to find; you can buy it almost anywhere.

Which Is the Best Potting Mix?

It is hard to determine what the best potting mix is. There are a lot of variables. For example, the type of plant you are using matters. Some require very specific soils for optimal cultivation. Other plants will grow in pretty much anything.

The FoxFarm brand seems to be a lot of people’s favorite, but they still say you have to add additional nutrients to it. However, it is over twice the price for about a third of the size of a bag of Vigoro mix.

If you are just doing one or two pots, this price might not matter much, but it can build up over time.

How Much Potting Soil or Mix Should I Buy? 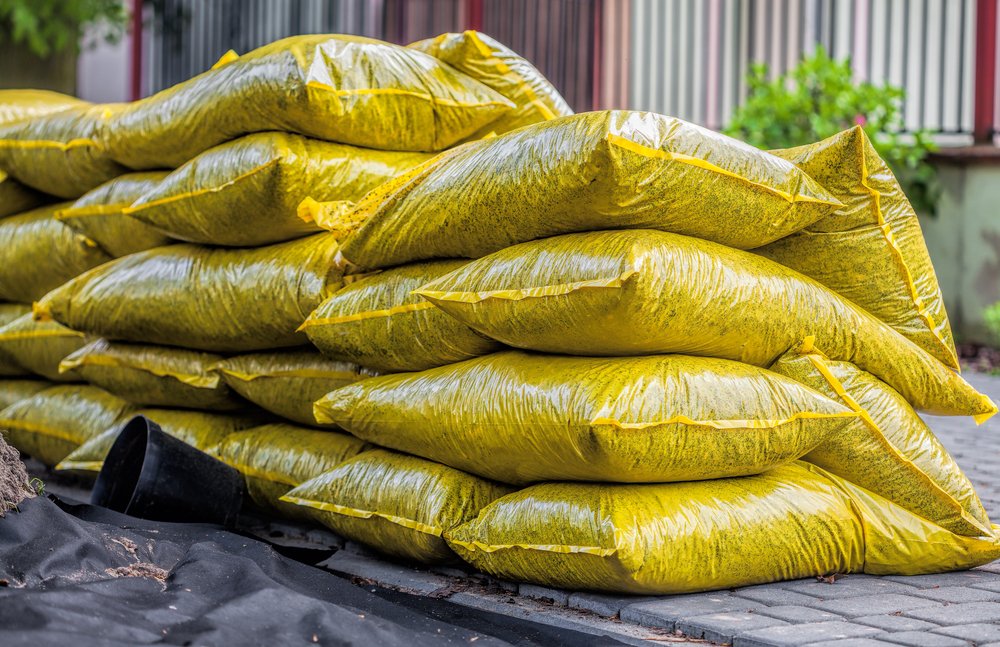 There are handy calculators all over the internet (such as this one from Dian Farmer, or this one from Home Depot) that can help determine how many bags you will need of any soil or mix you would want.

However, for some general estimates, a 5-gallon container will need about 15 quarts. A standard 12-inch clay pot will need 10 quarts. A 10-inch hanging basket needs about 5 quarts.

What Kind of Mixes Does Vigoro Have?

Vigoro has a wide range of mixes. Most of them can be found at Home Depot. They have a little of everything for your needs, so you can use their brand whether you are working with plants in pots or with trees outside.

Some examples of their mixes and soils are:

Most of the time, these words are used interchangeably. However, there are some differences between potting mixes and potting soil.

In fact, the differences are in the name. Potting soil may contain soil or sand. However, potting mixes do not contain any soil.

Here is a table of some of the most noticeable differences between the two growing mediums, so you can easily see the differences for yourself.

Neither is necessarily better than the other. It just depends on your use and purpose with the mix. Usually, potting soil is cheaper and lasts longer, but has poor water drainage and aeration in comparison to the potting mix. Potting mix is also usually preferred for starting seeds or container gardening.

However, depending on the plants you are growing, there are also specific mixes for a lot of them, which may work better than either of these two.

What Is the Difference Between Potting Soil And Garden Soil? 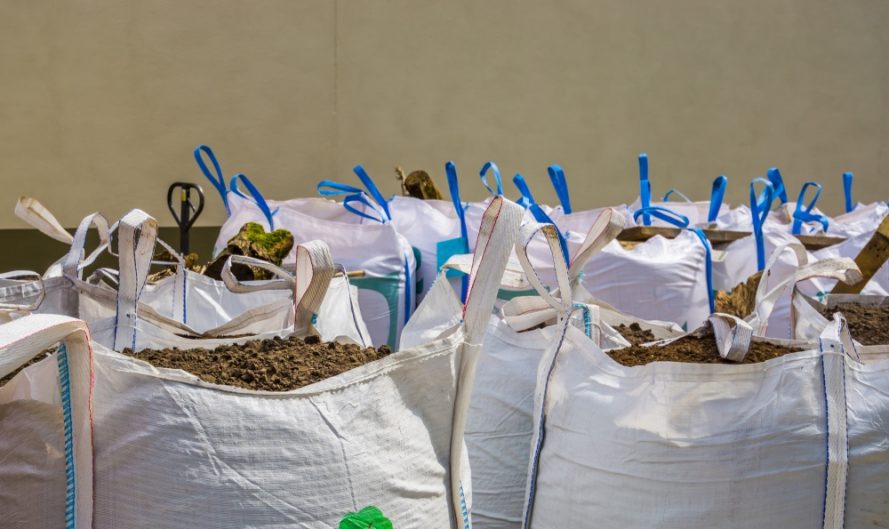 Garden soils are designed to be used on the ground directly while potting soils and mixes are often used inside jars or pots.

One of the primary reasons for this difference is that garden soils usually include some of the soils that are local to the area or region. If you are trying to grow local varieties of plants, having the ideal levels of sand, silt, and clay that naturally occur in your area can improve the growth of these plants and prevent any deficiencies that may arise from issues like waterlogging or incorrect soil pH.

Garden soil usually needs to be mixed with your natural soil to provide the right nutrients and density. For example, if your yard is very clay-heavy, then gardening soil can help provide silt and sand to help balance it out.

Potting soil and potting mixes, however, don’t need to include local soil blends. Potting soil can be used for indoor or outdoor potted plants and is generally for plants that aren’t grown in the ground.

Potting soil is also self-contained and doesn’t need much else to begin working for your plants.

Potting soil and garden soil have different aeration, density, and moisture drainage levels, so they can’t be used interchangeably.

What Is Soil-Free Potting Mix?

This is a bit of a redundant term, as all potting mix is soil-free. Potting mix tends to look a lot like soil when you first open the bag. However, it is a mix of different organic matter.

Some examples of what may be included are:

The ingredients are completely organic matter and contain nothing like soil, silt, sand, or clay, which are considered inorganic matters. Though the words are commonly interchanged, there is a difference between potting mix and potting soil.

Vigoro Potting Mix may not be the best potting mix out there, but it is organic and doesn’t cost a whole paycheck to buy. Like with all hobbies, there is a balance between top-quality products and what you can afford.

There is nothing inherently wrong with Vigoro mix. It isn’t a bad one and doesn’t contain harmful ingredients for your plants. It just needs a little help with aeration. It is also cheap, especially compared to the organic mixes that are considered the best.

For one or two pots, a $20 bag might not seem bad, but if you want to start big, you are going to need a lot of soil, and the costs build up quicker than you might think.

So if you are going to buy some potting mix, and want to save some money, get that Vigoro Potting Mix, but grab a bag of vermiculite as well to throw in there!