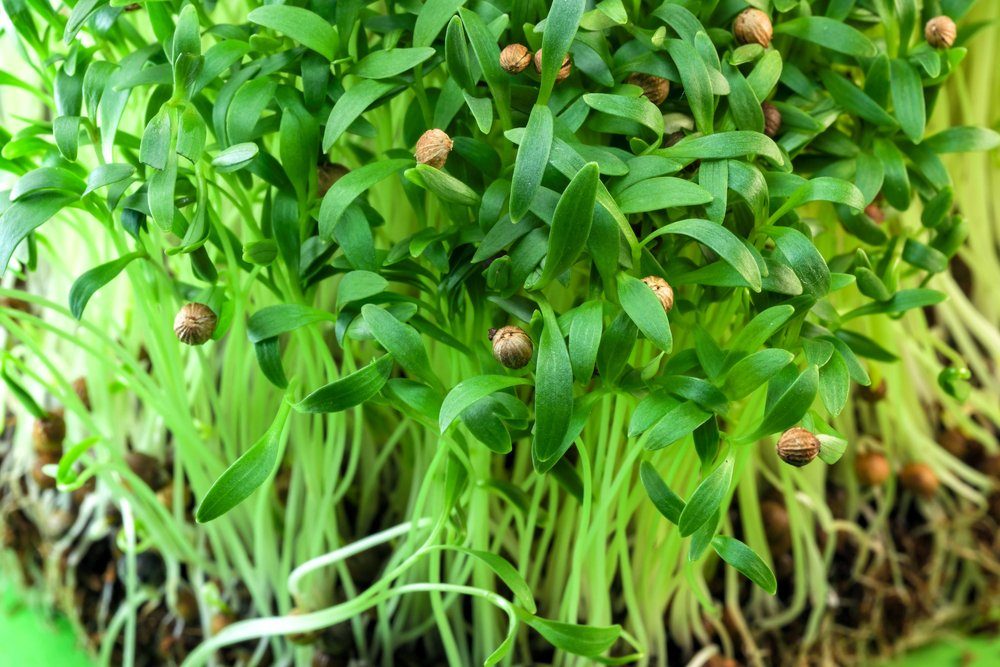 Cilantro isn’t a plant for everyone. Some people hate it, some people love it, and some are right in the middle. However, if you are part of the group that loves Cilantro and you want the health benefits of eating them as sprouts, look at growing Cilantro microgreens. By growing them yourself, you get the most nutrients, get to enjoy them while they are fresh, and can throw them right on your plate when it is time to eat.

If you grow a large number of microgreens, you will want to be sure to label Cilantro at least initially. Cilantro sprouts don’t look much different, they may be a little lighter, but they only have two cotyledons and not any of the distinct leaves that Cilantro has.

It is only as it ages that Cilantro gets its unique look. However, the taste and smell of Cilantro microgreens are very similar to fully grown Cilantro, so if you are having doubts, you can always give the plant a little nibble.

What Does Cilantro Look Like When it Starts to Sprout?

Many plants start off the same way when they are small sprouts, especially plants that can be used as microgreens like Cilantro. There are certain differences, but they can be hard to tell apart.

For the most part, Cilantro tends to come out of the soil as a pale green or even white sprout. They usually stay a lighter color until they are a little bit older in maturity. Like many other sprouts, they tend to have two main leaves, one on either side of the very top of the stem.

As they grow older, they will start to form more leaves. This is when it gets easier to tell Cilantro apart from other plants, as the new leaves will be the flat, wide leaves with ridges along the outer side.

You can also rely on smell and taste to help you to confirm that it is Cilantro growing. Cilantro microgreens or sprouts tend to taste and smell very similar to mature Cilantro. Often, even if you are using Cilantro as microgreens, you will want to harvest them after the first few leaves form. So by the time you want to consider harvesting, you should have a clear idea of which plant you are growing.

How Long Does it Take For Cilantro to Sprout? 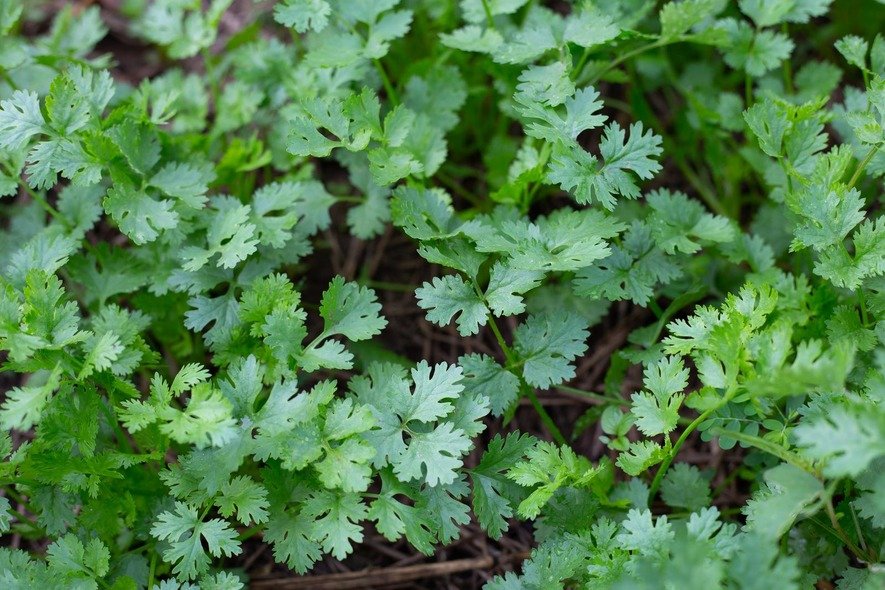 As long as you provide ideal conditions for your plant, you can see Cilantro starting to sprout in seven to ten days, or somewhere between one and two weeks. However, it may take longer if it is a little cold or the sprouts aren’t in ideal conditions. In general, you can expect Cilantro to start sprouting by the end of three weeks.

Can You Eat Cilantro Sprouts?

It is entirely possible to eat Cilantro as sprouts or microgreens. It is a slow-growing microgreen but adds a burst of flavor and brightness to many dishes. The only difference between harvesting Cilantro as a full plant and as a sprout is when you harvest. Instead of letting it grow to its full height, you harvest it while it is still small.

Generally, microgreens are considered healthier than full plants because you get the nutrients from the endosperm, instead of the variable nutrients plants get from the soil later on in life.

Many describe Cilantro sprouts to taste like a mix of standard Cilantro and citrus. Others describe it as having a hint of grass and pepper taste in addition to the Cilantro flavor. This means that if you aren’t one of those people that like Cilantro, there is a good chance that you won’t like the microgreens.

You can put them on almost any dish where you would put Cilantro, including tacos, rice, smoothies, chutneys, salsas, salads, and soups.

How to Germinate Cilantro Seeds in a Paper Towel?

Before you can eat Cilantro, in any form, you have to buy or grow the herb. With Cilantro sprouts, it is easier to grow them, as then you can harvest the microgreens at their maximum freshness.

One of the most common ways to start the germination process for Cilantro is to use a paper towel to germinate them. This allows you to check that the seeds are actually going to sprout before you go through the process of planting them. It can also speed up sprouting.

To germinate Cilantro seeds with a paper towel, you will do it the same way you would most other plants. You take a slightly damp paper towel and place the seeds in between the layers. To make the germination work even better, you can place them in a sealable plastic bag. This increases the effectiveness and creates a kind of greenhouse effect.

This method works well for many reasons. It often speeds up the germination process, allows you to test the seeds beforehand to make sure they will actually grow, it creates less mess, there’s no soil to get everywhere, and it can be something fun for your whole family to do together.

How to Germinate Coriander Seeds Faster? 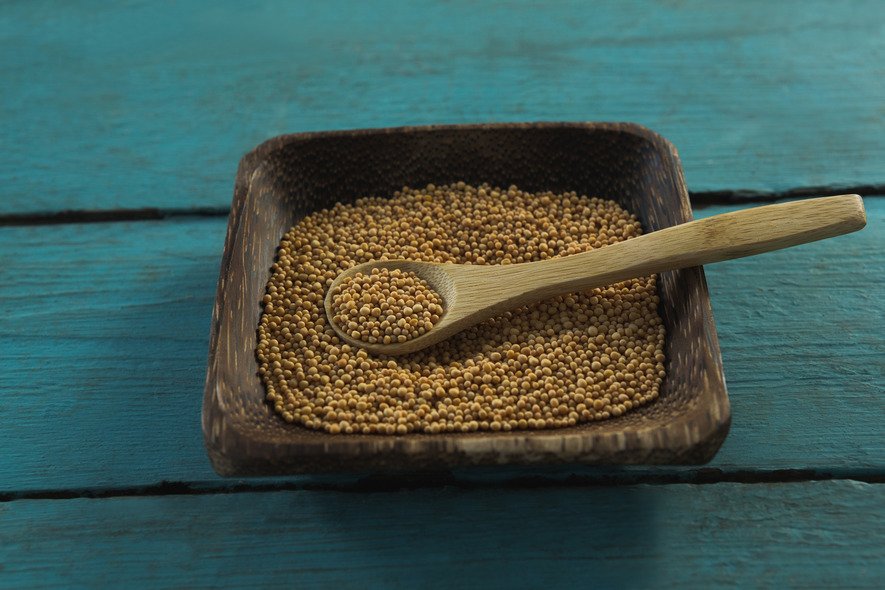 The consensus among gardeners and growers of Cilantro is that they tend to germinate faster if the seeds are soaked for a few hours before planting. You will notice, looking at many gardening books, that they often tell you to pre-soak Cilantro seeds, but not how much.

On average, you want to soak Cilantro or Coriander seeds for somewhere between eight to twenty-four hours before you want to plant. So if you can remember to do it the day before, you have a better chance to have your seeds germinate faster.

Not only does this lead to faster germination, but some gardeners that decided to run their own tests found that the germination rate was better for pre-soaked seeds as well. However, in the long run, there isn’t much of a difference. Though the soaked seeds will often start to germinate and grow faster, the non-soaked seeds seem to catch up by the time they are ready to harvest.

The paper towel method or soaking the seeds offers some of the best and fastest germination, but in the long run, it doesn’t make much of a difference.

Cilantro seeds do best with temperatures between 55 to 68°F (13 to 20°C). This means that the seeds don’t have to be super warm, and it may actually be a little too hot in your home. You may need to find a cooler area to germinate your Cilantro seeds for the time being.

They can even withstand temperatures that are just at freezing. So if you have a slight cold snap, don’t worry. It likely won’t kill your Cilantro, though it may slow down their growth rate a bit.

Cilantro seeds do prefer darkness for their germination. They can handle complete and total darkness. For most people, this simply means that you want to bury your seeds about a quarter to a half-inch below the soil (0.5 to 1.25 cm). But you can also place them in a dark room, or put a lid on them to give them more darkness.

It is important to remember that this darkness is only while they are germinating. Once they start to sprout out of the soil, they will need light for their energy. Also, while they like darkness, you want to be careful to not plant them too deeply into the ground, or they won’t be able to break through the soil to sprout.

Cilantro seeds are fairly easy to germinate. They need moist, cool soil and a dark place. Wrapping them in a damp paper towel or soaking them for up to 24 hours before planting will increase your germination speed, though by the time you harvest, there isn’t much of a difference. It usually takes one to two weeks for the Cilantro to start sprouting but may take up to three weeks.

Make sure to label your Cilantro sprouts as well. They initially start off looking very similar to most other plants, if not just a little bit lighter. By the time you can harvest them, however, they will start to grow the unique leaves of Cilantro.