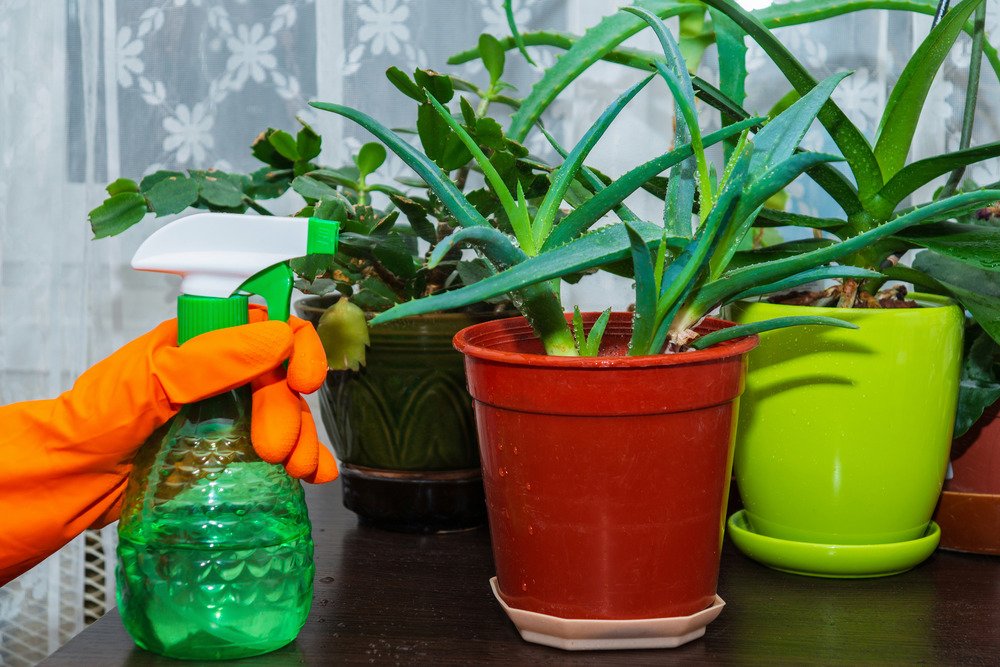 It’s always scary when your succulent starts to show signs that maybe you have showered it (literally) with too much love. An overwatered Aloe plant looks like it’s changing or losing color (often turning a shade of yellow or brown), its stems are turning soft, and it’s not standing as tall as it usually does.

To make matters a little murky, these changes can also be a sign that your Aloe plant is experiencing other health problems, unrelated to overwatering. Understanding exactly what the signs of an overwatered plant look like can help you to make sure your Aloe Vera gets the care it needs.

Keep reading to learn more about what an overwatered Aloe plant looks like, as well as what other conditions might be confused with overwatering.

How Do I Know If My Aloe Is Overwatered?

Unfortunately, there is no easy way to tell if your plant is overwatered. While your plant does show definite signs if overwatering is indeed the culprit, these signs can also occur as a result of other issues such as underwatering or plant disease.

However, if you do notice any of the following symptoms, overwatering is something you should consider as a potential cause:

Can a Succulent Come Back From Overwatering?

Depending on the severity, it is possible to bring a plant back from overwatering. It is important to keep an eye on your plant so you can catch the symptoms early enough.

It is also important that you don’t confuse the symptoms of overwatering with those of underwatering. Adding more water to your plant will only exacerbate the situation.

Unfortunately, Aloe leaves that have turned a different color or become mushy due to overwatering will fall off. There is no way to recover them, as the water has burst the cell walls open, and this can’t be easily fixed.

Once the plant is feeling better, it is usually just a good idea to get rid of these leaves, as they won’t be recoverable. This is usually the case with the stems too. If you have a plant that has only one stem though, it may be worth waiting to see if the Aloe can recover, especially if it is only slightly mushy.

It can be hard to bring back an overwatered Aloe plant. It is one of the most common reasons Aloe plants die. But if you treat it with patience and care, you may find it can come back from the brink and become a healthy, beautiful succulent yet again.

How Do You Fix an Overwatered Aloe Plant?

If you can catch the signs of your plant being overwatered early enough, it is simple to fix. Simply wait a while before watering your plant again. You want the soil to be completely dry for this next watering so that your overwatered Aloe and its roots get a chance to dry out.

If the situation has not improved for a long time or is more severe, then you might have to completely repot your Aloe Vera. Keep the following points in mind if repotting:

Finally, hope for the best and recognize that even finding a new home for your Aloe won’t guarantee a positive outcome, as some plants are just too far gone.

How Often Should Aloe Be Watered?

For the most part, an Aloe plant should only be watered about every two or three weeks. In the winter, this can usually be spread out further to every four or six weeks.

It is hard to determine the exact amount to water your Aloe. If you have a pot and soil that drains well, the best thing to do is soak your Aloe in water for a few seconds. The excess water will drain off and you can leave it alone until you have to water it again.

If it is in a large pot where dunking it into water isn’t possible, you can just pour water into it until it starts draining out of the bottom. If you measure the amount of water you add before drainage occurs, you can use this amount as a baseline in the future.

Always check your soil before watering your Aloe. Even if it has been the right amount of time, you may find that your soil isn’t draining as it should, and it is too damp to consider watering again.

There are always a lot of factors involved in the length of time between waterings, and even a cold day or two can cause moisture to stay in the soil longer than normal.

Root rot in Aloe Vera usually presents itself as roots that look dark brown and are soggy. If they are well into the rotting process, they may fall off with a sudden movement or when touched.

Root rot comes from a fungal infection. Since fungus tends to do better in moist soil, it makes a lot of sense that plants that are overwatered tend to develop root rot. If severe enough, the rot can climb up to the leaves. If this happens, you will see the leaves start to turn yellow and the plant won’t grow anymore. The leaves near the bottom of your Aloe plant will also turn mushy.

Since root rot and overwatering usually go hand-in-hand, it is always good to check for root rot when taking care of an overwatered Aloe plant. Even if you don’t see signs of root rot when you go to look, it may be a good idea to use a fungicide to make sure there aren’t any hidden fungi spores that can cause harm to your plant as it is trying to recover.

Why Is My Aloe Plant Turning Brown at the Base?

There are many reasons that an Aloe Vera plant may start to turn brown at the base. While two of those reasons are overwatering and root rot, it’s also possible that neither of these is the cause.

Some of the other reasons your plant may look brown at the base can include:

It can be hard to determine the cause of your Aloe turning brown at the base, and you may find you guess wrong if you react too quickly.

The first thing to do is check the soil. If the soil is very moist and your leaves are brown, it is likely root rot, overwatering, or a mix of the two.

If your soil isn’t overly wet, or you are careful about your watering, it is a good idea to keep an eye on the temperature. Aloe plants do best between 55°F and 75°F (12°C  and 23°C). If you aren’t staying in this range, your plant may experience shock from the temperature fluctuations.

There are four main diseases that you may experience with your Aloe plant:

Though all of these diseases are different, they can generally be fixed in the same way. By keeping the plant on the drier side and in warmer temperatures, you can help your plant fight off most of the diseases that it encounters.

If the situation is serious, you may need to repot or get rid of bad leaves and roots. But if you catch it in a reasonable time, you should be able to remedy the problem by simply delaying your watering schedule by several days. 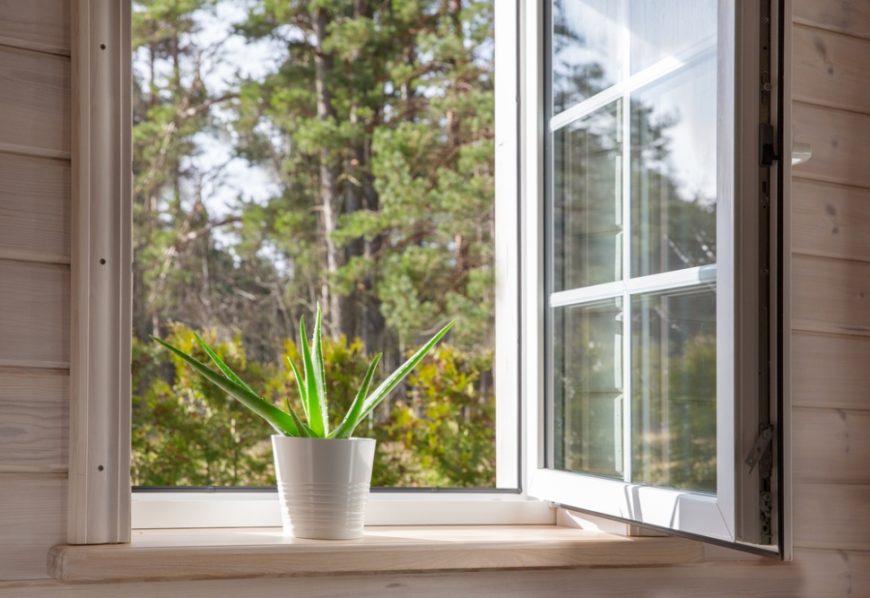 You may be under the impression that Aloe can handle a lot of sun since they are desert plants. However, they do much better out of direct sunlight.

Aloe plants can develop a sunburn when left in the sun for too long. When that happens, you may notice the leaves of your plant starting to turn brown. This usually looks more like crispy tips of leaves (as opposed to soft, mushy leaves and stems), especially near the top of the plant, but it can still often be confused with the symptoms of overwatering.

While Aloe can handle a lot of underwatering, it does still need moisture to properly grow. Instead of mushy brown leaves that come with overwatering, the leaves of an underwatered Aloe plant will generally be hardened and brown.

Aloe plants will generally shrink when underwatered, as they don’t have enough moisture in their stems and leaves to keep them firm and plump as Aloe plants usually are.

The easiest way to tell the difference between underwatered and overwatered plants is through the soil. If the soil is dry and hard, your plant is likely underwatered. However, if your soil is wet and soft, it is probably overwatered.

Thankfully, with succulents, it is usually easy to see the difference.

Why Is My Aloe Plant Turning Gray?

Aloe plants turn gray when they are in shock. Plants go through shock when they experience a sudden change in their environment. This can include things such as the temperature, amount of sunlight, or even humidity.

The most common reason Aloe plants turn gray is due to the amount of sunlight. While Aloe plants can get used to a lot of sun, they need to slowly be introduced. This is generally best done by introducing them to just a little bit of sun a day and increasing the duration over time.

However, plants can also turn gray when they are replanted. The change in environment and soil can lead them to be shocked as well.

Overall, there isn’t much to be done for a plant that has turned gray. Try not to change much else in their environment for a while and they should soon start to go back to their normal green color.

What Does an Aloe Vera Plant Look Like When It’s Dying? 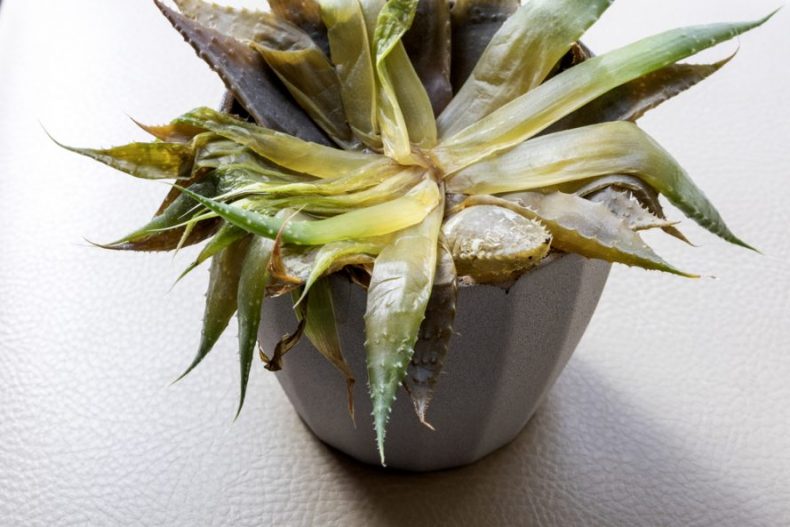 If your Aloe plant has more soft stems and yellow, drooping leaves than it has healthy ones, that is a good sign that your plant is dying. If they are close to death, the leaves will start falling off and the remaining ones will be black or brown.

If you want to know how your plant is doing, you can check the roots. The roots of a dying plant will be soggy, brown, and easy to pull off of the plant. If you have an Aloe Vera plant that has a large number of roots that are like this, it may be too late to save your plant.

To put it simply, if your Aloe Vera plant is completely soft and mushy or completely hard and brittle as well as black, brown, or yellow, that is a good sign that your plant is dying, if not already dead.

Aloe plants, and many succulents, don’t need nearly as much water as people like to think they do. They can often go for a month or more without having to be watered. However, a lot of people new to the succulent world may only wait a week or two before trying to water their Aloe plant again.

An overwatered Aloe Vera plant has yellow or brown leaves, soft stems, or soggy roots that are rotting. Thankfully, it is entirely treatable and your plant will bounce back in no time…just as long as you recognize the signs for what they are, and don’t make the situation worse by overwatering.