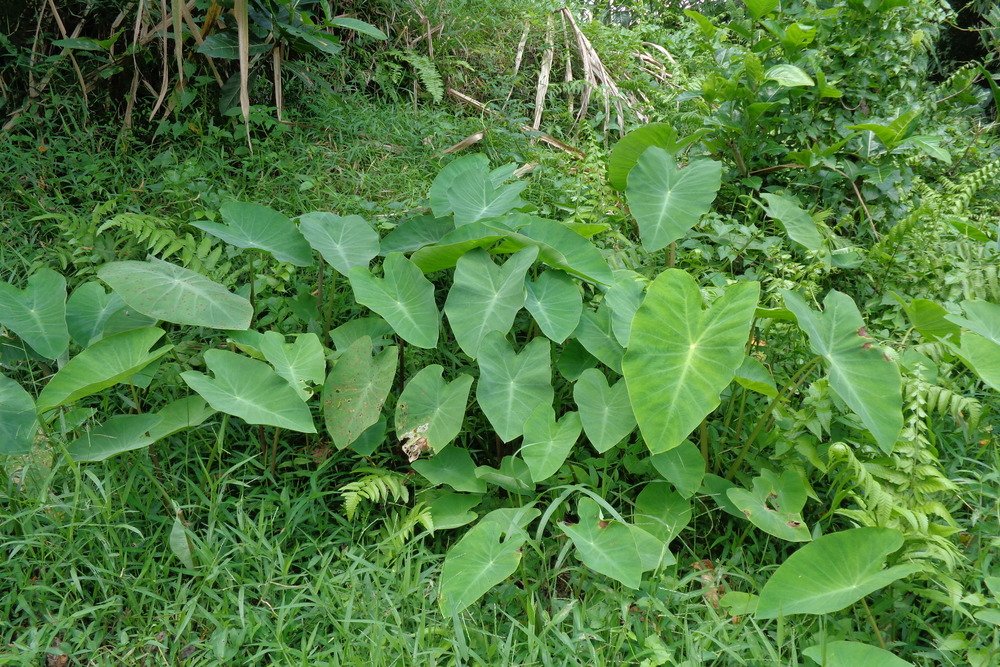 If the large, rounded and heart-shaped leaves of the beautiful Elephant Ear plant (Colocasia) have caught your attention, you are not alone. These striking houseplants are fantastic statement pieces that are easy to care for. If you are hoping to fill your home (or garden) with more of these plants, there are plenty of similar plants to choose from!

What are Elephant Ears?

While the nickname “Elephant Ear” is occasionally used for other plants with similar foliage structure, it is most commonly given to Colocasias, a genus of plant and a member of the Araceae family. Their nickname is likely due to their large leaves, which resemble the shape of elephant ears. Not only that, but these plants can also grow quite large.

Colocasias can grow stems as tall as 7 feet (2.1 m) with leaves as tall as 3 feet (0.9 m). A single broad leaf that is slightly heart-shaped will develop from the vertical stem, giving these plants additional height. New leaves will emerge from the center of the plant, while the older outer leaves will eventually die off to conserve energy for new growth.

Elephant Ears are tuberous plants which grow from bulbs (also called corms) beneath the soil. They can be grown outdoors in Zones 11-7, but they are also commonly grown indoors as houseplants. Even indoors, they can occasionally go dormant during winter, when their leaves die back until the growing season returns. You can prevent this by adding artificial grow lights to their environment to mimic a prolonged growing season.

If you are familiar with Elephant Ear Plants, you will know that they prefer bright, indirect light, warmer temperatures, and moderate to higher humidity levels (ideally 50% humidity). In addition, they prefer for their soil to nearly dry out between watering, and having a well-draining soil mix is essential to prevent their corms from rotting.

Common types of Elephant Ear Plants are Jack’s Giant, Diamond Head, Pink China, and Fontanesii. While Elephant Ears can have several green varieties, there are also pink-variegated varieties and varieties with purple backing on their leaves.

There are quite a few plants that look similar to Elephant Ears. So much so that they tend to share a similar nickname and are often confused for traditional Elephant Ears (Colocasias).

Alocasia (Similar in Care and Appearance) 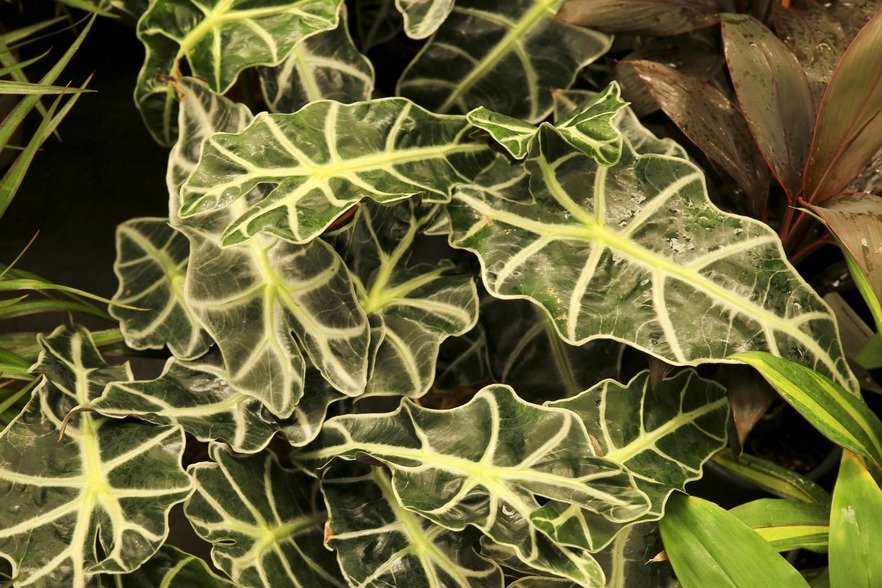 Another member of the Araceae family, Alocasias, is very similar to Colocasias (Elephant Ears). Alocasias are closely related to Elephant Ears, which is apparent in their structure, appearance and care requirements. They are so closely related that their botanical names are also nearly identical. Alocasias also develop a single, broad leaf from a stem and will experience new foliage growth from the center of the plant.

They are also tuberous plants that develop from a corm beneath the soil. In addition, Alocasias can also become dormant and lose leaves in the winter and then regrow from the corm in the spring. Alocasias are a very popular houseplant among hobbyists and collectors, as many are sold in the juvenile form at a smaller and more manageable size.

Alocasia Varieties That Are Similar To Elephant Ears

Alocasia Calidora (also known as Alocasia Pink Dragon) is a variety that displays similar characteristics to the Elephant Ear plant. It has bright pink stems and dark green foliage with prominent veining. While often sold in a juvenile state, these Alocasias can grow as large as 4 feet (1.2 m) under ideal conditions.

Alocasia Frydek is another species that has a similar appearance to Elephant Ears. The leaves are slightly less rounded than Elephant Ears, but they can grow up to 3 feet (0.9 m) tall under ideal conditions, giving that additional height.

What’s the Difference Between Elephant Ears and Alocasia?

Alocasias and Elephant Ears, though very closely related, are not the same plant.

While Elephant Ears and Alocasias may look very similar at first glance, there are a few ways to distinguish the two. First, Alocasias are smaller than Elephant Ears. While most varieties will grow between 2 to 6 feet (0.6 to 1.8 m) tall, most Colocasias (Elephant Ears) can grow larger than 7 feet (2.1 m) tall.

Beneath the soil, you will also find the tubers quite different between the two types of plants. For example, Alocasias have smaller and more delicate tubers compared to Elephant Ears, which are thicker and have a striped band around them.

Caladium (Similar in Care and Appearance)

Another relative of the Elephant Ear is the Caladium Angel Wings. A single Caladium stem will grow one sizable round leaf, similar to Elephant Ears. Caladiums are also tuberous plants that will go dormant during the winter.

Native to South American rainforests, Caladiums are very colorful and have stunning but delicate foliage. They grow along the forest floor, making them shade and low-light tolerant.

Caladium Varieties That Are Similar To Elephant Ears

Xanthosoma Lindenii (often called Caladium Lindenii) is another variety that is very similar to Elephant Ears, particularly due to the leaf structure and shape and the bright cream veining in the leaves themselves.

Are Elephant Ears and Caladium the Same? 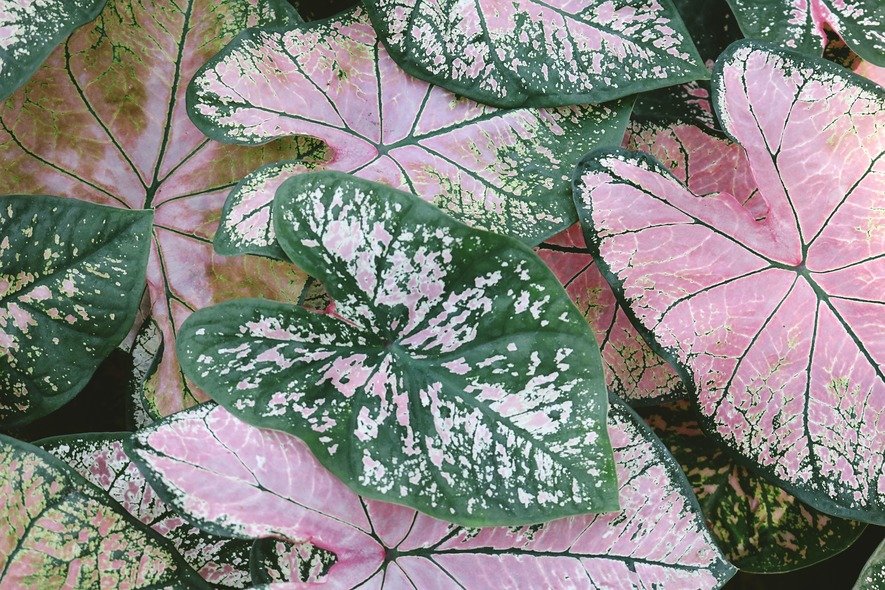 Colocasias and Caladium occasionally share a few similar characteristics since Elephant Ears are related to Caladiums but are not the same plant. Their size difference can distinguish them. Caladiums only grow to be about 2.5 feet (0.7 m) tall, in contrast to Elephant Ears which can grow twice that size, if not larger.

Caladiums tend to have much more delicate leaves than Elephant Ears, which means that they require higher humidity levels and should be protected from winds to avoid damage. Elephant Ears are a bit hardier.

In addition, while Elephant Ears enjoy bright, indirect light, Caladiums are more low-light tolerant. What is interesting about Caladiums is that they can be propagated from stem cuttings, while you can only propagate Elephant Ears by dividing their corms.

Monstera Deliciosa (Similar in Appearance only)

Monstera Deliciosa, while they have slightly similar appearances as Elephant Ears, they are vastly different. Monstera is another genus of plant within the Araceae family. Monstera can also grow to about 7 feet (2.1 m) tall and produce broad leaves. Despite these similarities, they are very easy to distinguish from Elephant Ears.

Is Monstera the Same as Elephant Ears?

Monsteras are classified as an entirely different type of plant than Elephant Ears. Though they are in the same family, Monsteras are their own genus.

Unlike Elephant Ears and many other similar plants in the same family, Monsteras are not grown from corms. Instead, they grow roots under the soil and aerial roots, which they use to climb large rainforest trees. While an Elephant Ear stem will produce a single leaf, multiple stems will grow from Monstera nodes instead of bulbs under the soil.

Lastly, Monstera Deliciosa have the nickname “swiss cheese plant” because their leaves will produce splits or fenestrations. These splits will only develop as the plant matures, so juvenile Monsteras may look quite similar to Elephant Ears.

What to Plant With Elephant Ears?

Elephant Ears can get quite large, so make sure you choose a hardy companion. It’s also important to be careful of your Elephant Ear plant absorbing additional nutrients and water due to its size and root density.

Unfortunately, a Caladium is not a well-suited companion for an Elephant Ear plant since their light requirements are very different. While Elephant Ears enjoy bright, indirect light, Caladiums have very thin and sensitive leaves and therefore need less intense light levels. However, if your Elephant Ear plant is very large, it can provide your Caladium with extra shade.

Like most members of the Araceae family (Alocasias, Caladium and even Monstera), Elephant Ears prefer to have a very well-aerated and well-draining soil mix. Therefore, plants that prefer moist, dense soil will not be a good fit for your Elephant Ear.

Lastly, when companion planting with your Elephant Ear Plant, it is essential to consider what goes on beneath the surface of the soil. Elephant Ears bulbs or corms are the life force of the plant. Therefore, choosing a companion plant that grows slowly and will not overcrowd the soil bed is important.

Elephant Ears (Colocasias) are like many houseplant varieties, with a nickname borrowed from other plants with similar characteristics. Their large, heart-shaped leaves are very similar to other genera of plants, particularly those belonging to the same plant family.

The two most similar plants to Elephant Ears are Caladium and Alocasias, which are in the same family and have a similar appearance and care needs. Monstera Deliciosa is a plant similar in appearance only and has very different requirements.

This is great news for those who find the structure and care requirements of Elephant Ears appealing, as there are plenty of choices, most of which only have slight deviations in care.