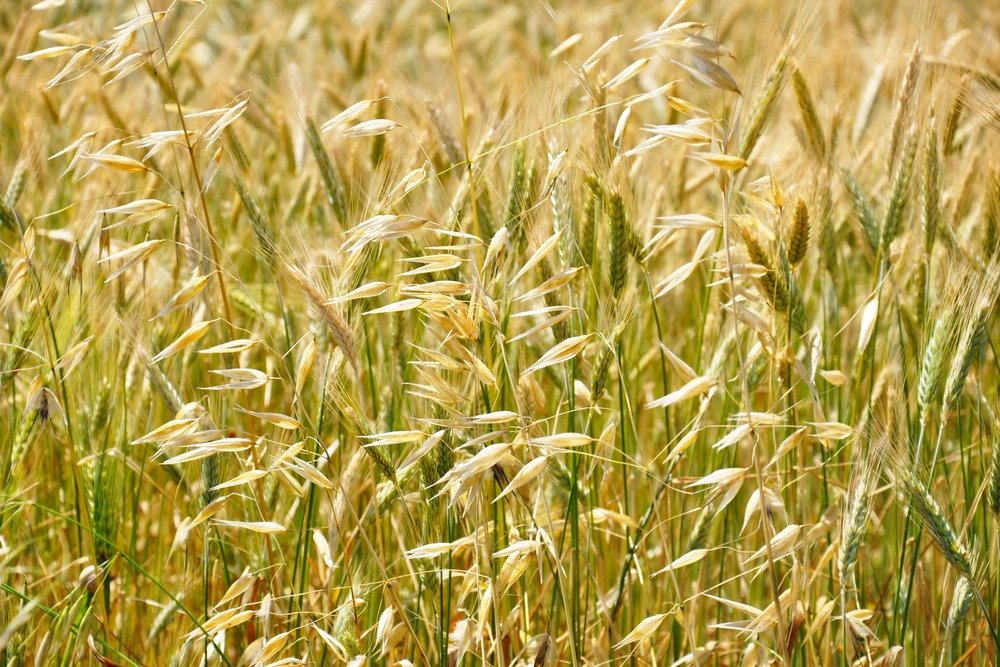 If you stumble across a lawn that isn’t well taken care of, or maybe are out in a field, you may start to believe that you are in a Wheatfield. Some grasses can closely resemble Wheat due to their leaves and their spiky seed heads that grow at certain parts of the year.

Some of the Grasses that look a lot like Wheat include Ryegrass, Quackgrass, Barnyard Grass, and even your local Turf Grass if you don’t care for it properly by providing enough water and mowing regularly.

However, Grass isn’t the only thing that looks a lot like Wheat. Some other plants and weeds can easily be mistaken for Wheat if you aren’t careful. There was even once a whole genus of Grasses that were labeled Wheatgrass due to their similarities to Wheat.

While these Grasses have been put into different taxonomic classes now, they still bear the resemblance, and their name often has Wheatgrass in it. Like the plant they are compared to, they are often edible and can be foraged in the wild.

What Are 4 Types of Grass That Look Like Wheat?

Ryegrass can look like Wheat. It is a type of Grass that many people use in their yards, but it can also grow in other areas like a weed. Unlike other Grass varieties, it grows in bunches, instead of nice and uniform like many other lawn Grasses do.

Most of the time, it will look like Grass, especially when mowed properly. However, if it is left to do its own thing, it can grow up to 3 feet (0.9 m) tall. It also grows flowers and seed heads at the top of the plant which is very similar in appearance to Wheat. These heads stay around from spring to fall. 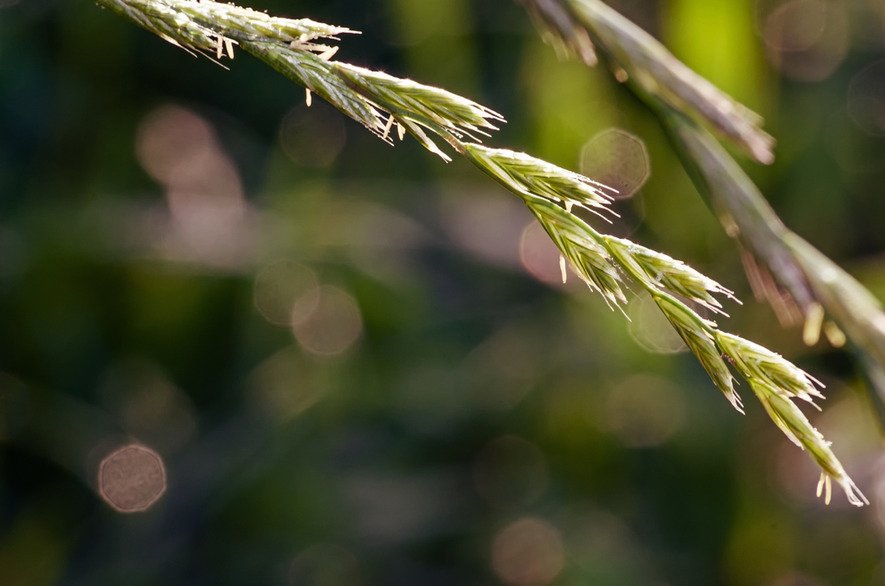 Also known as Couch Grass or Twitch Grass, Quackgrass is more of a Grassy weed than a Grass. However, it can grow up to 4 feet (1.2 m) tall if not contained. When it goes to seed, it can easily look like Wheat or Ryegrass if you aren’t aware of the differences.

Barnyard Grass can also look like Wheat in the right conditions. It is native to Asia and Africa but has become a weed that is invasive throughout the Americas and Australia.

This Grass is often found in temperate and tropical areas. It can easily grow up to 3 feet (0.9 m) tall and produces flowers and seed heads between summer and fall. These can make the Grass look similar to Wheat, especially if you don’t know what you are looking at, or don’t give the plant a closer inspection.

When they stop being managed, most Turf Grass can end up looking like Wheat. Most people take care of their Turf Grass, cutting them to the desired length before they can grow a seed head. However, if they do manage to grow taller and form a seed head or flowers, they can be mistaken for Wheat.

Sometimes, if your Turf Grass isn’t getting the right care, it may also grow seed heads to try and produce better. Most Grass can be produced by both rhizomes in the soil and through seeds. If the rhizomes are struggling due to poor quality soil or dry soil, they may produce more seed heads.

What Is the Difference Between Wheat and Wheatgrass?

Wheatgrass is the leaves of a Wheat plant (Triticum aestivum). When the leaves are freshly sprouted, they are called Wheatgrass. Sometimes, the juice that comes from the Wheat plant is also known as Wheatgrass. Interestingly enough, the leaves that make Wheatgrass are considered gluten-free, unlike the common parts of Wheat like the seed kernel.

Therefore, the only difference between Wheat and Wheatgrass is the age. They are the same plant. However, since the Wheatgrass is young, it doesn’t have seed heads or flowers yet. Most of the time, it ends up looking like actual Grass more than Wheat.

There is often a little confusion though. While Wheatgrass is mostly used to refer to the young version of Wheat, there is also a set of grasses known as Wheatgrass, which is a group of Grasses that look a lot like Wheat.

These Grasses grow naturally in the wild and are often edible as well. They were once bunched under one genus, Agropyron, but many have started to be moved to different genera.

These Grasses have a lot in common. They are often perennials, use rhizomes to spread, and have spiky flowers and rolled leaves. Most can also handle a bit of drought.

What is Another Name for Wheatgrass?

There are many kinds of Wheatgrass. Some common types include:

All of these Wheatgrasses used to be under the Agropyron genera but have recently been moved around in their taxation.

Is Ryegrass the Same as Wheatgrass? 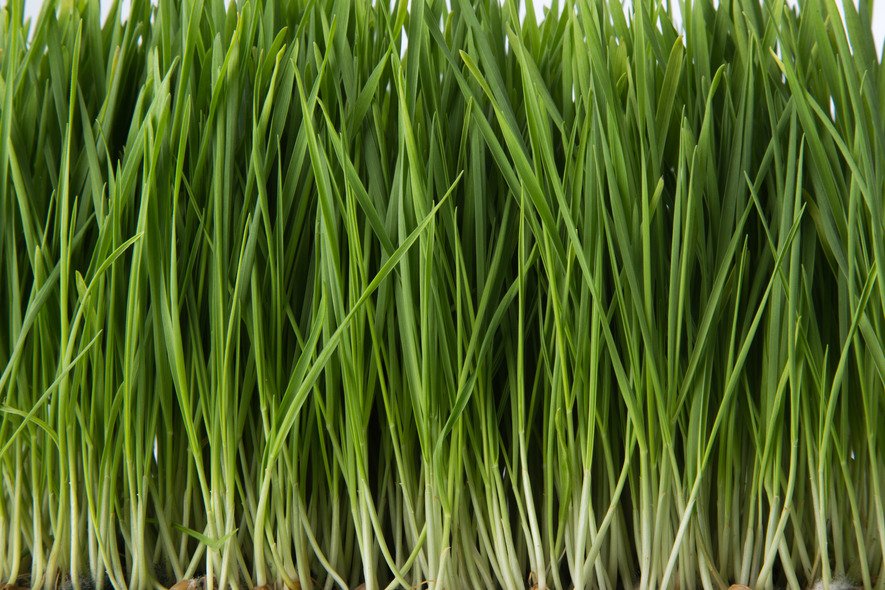 While Ryegrass and Wheatgrass are similar, they are not quite the same plant. Wheatgrass and Ryegrass are both considered to be cereal grasses. They are both part of the same family as well and have similar nutritional benefits and tastes.

Depending on where they are grown, one may grow faster than the other, so some places prefer one type over the other. However, both Grasses are popular all around the world.

Can You Have a Wheatgrass Lawn?

Proper Wheatgrass can be used for a lawn. They are best in places where there is a lot of erosion or a need for reclamation of the space. They have strong rhizomes, which make them ideal for pushing out other grasses.

These lawns are also often more low-maintenance than traditional lawns because it is drought tolerant and can handle areas that only get 6 inches (15 cm) of water a year.

Additionally, while Wheatgrass isn’t often used for foraging, it is edible for most livestock.

When picking out Wheatgrass, look for ones that work for your area. You can even pick out multiple to contain a blend. For example, in Utah, you can use local Wheatgrass mixed with Blue Gama and Raspberry Clover. This also reduces your mowing, as you only have to mow about once a month.

What Is Another Plant That Looks Like Wheat but Isn’t?

If your Grass is starting to look like hay or straw, it isn’t necessarily because you are growing Grass that is similar to Wheat. When Grass isn’t getting enough water, the lawn tends to take on a more straw-like property. The Grass becomes stiffer and drier.

For example, when walking on the Grass would usually result in a bouncy step that left little trace, stepping on dried Grass will usually cause it to break and leave the shapes of footprints on your lawn.

Sometimes, if you don’t take the right care of the Grass and allow it to get too long, it may also look like hay or straw as the tops dry out and die.

Wheat can be a pretty plant, but it is an annual and its primary role is to produce food. However, there are plenty of plants out there that look similar and are perennials. These plants can be Grasses, plants, or weeds.

Some of the Grasses that look a lot like Wheat include Ryegrass, Quackgrass, Barnyard Grass, and even your local Turf Grass if you don’t care for it properly by providing enough water and mowing regularly.

Most Grasses can look like Wheat if not taken care of properly. The Grass will start to form seed heads that look a lot like the tops of Wheat. If allowed to grow without mowing or enough water, you can easily confuse several Grass species with Wheat.