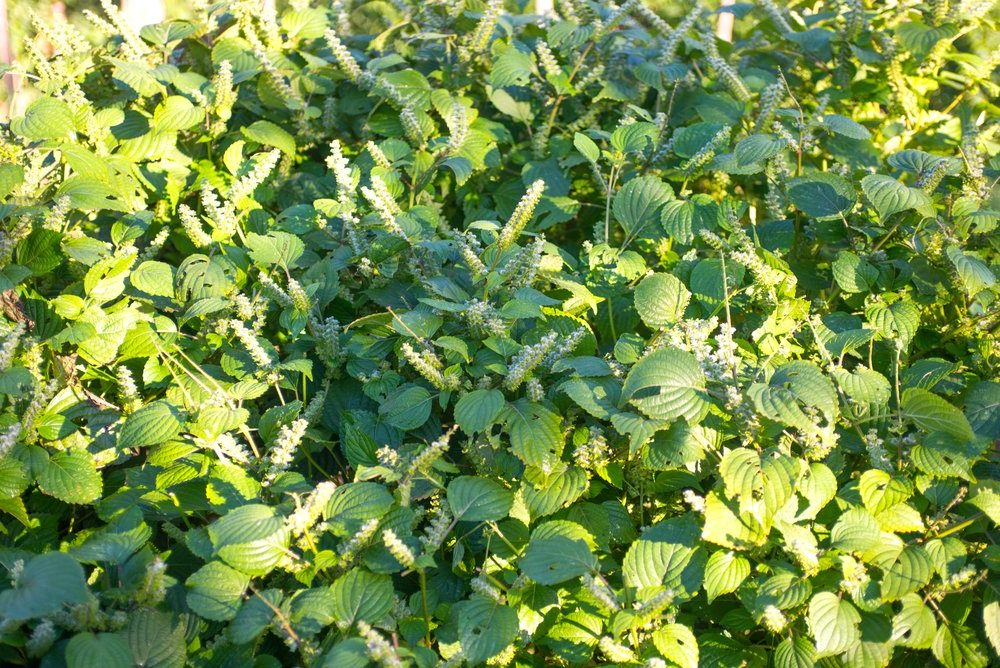 If you’re a fan of Korean food, you have probably eaten Perilla leaves at some point in your life. Perilla is the common name of the Asian crop Perilla frutescens. It’s also sometimes called Perilla Mint, beefsteak plant, or Korean mint due to its popularity in Korean cuisine.

Although Perilla Mint is grown and harvested as a crop in parts of Asia, it’s considered an invasive species in North America. It has a tendency to escape from gardens and choke out native plants. Another concern with its spread is its toxicity to animals.

But can dogs eat Perilla leaves? If you’ve noticed Perilla leaves growing around your home, it’s best to remove them. The leaves and flowers are considered toxic to dogs, horses, and cattle and can cause respiratory distress. The first thing to do if your dog ingests Perilla Mint leaves, is to bring them to the vet immediately.

Is Perilla Leaves the Same as Mint Leaves?

Perilla Mint belongs to the mint family (Lamiaceae). It originates in Asia and is grown commercially for medicinal and culinary purposes. The leaves have a strong minty aroma and a flavor that is similar to anise. Perilla leaves are often used in Chinese, Japanese and Korean cuisine. The popular Korean dish kimchi is often made with fermented cabbage and Perilla leaves.

Peppermint (Mentha) is in the same family as Perilla Mint and shares many of the same characteristics. Peppermint has a strong fresh flavor and is often used to make teas, candies, and essential oils.

Peppermint essential oil is extremely toxic to dogs, cats, and horses and can cause diarrhea and vomiting when ingested. Fresh or dried peppermint leaves are rarely consumed in amounts large enough to be toxic, but can still cause gastrointestinal upset.

Perilla Mint is often mistaken for basil due to its visual similarities. Perilla Mint has oval-shaped leaves that grow opposite from each other and are covered in fine hairs. Perilla leaves can be green or purple (which is why it’s also sometimes called purple Perilla). The edges of each leaf are serrated.

Perilla Mint likes to grow in areas where the soil is disturbed, such as along river beds and near railway tracks and roads. It’s classified as an invasive species in eastern states like Maryland and Virginia, where it has escaped gardens and become a common weed.

Is Perilla Mint Toxic to Dogs? 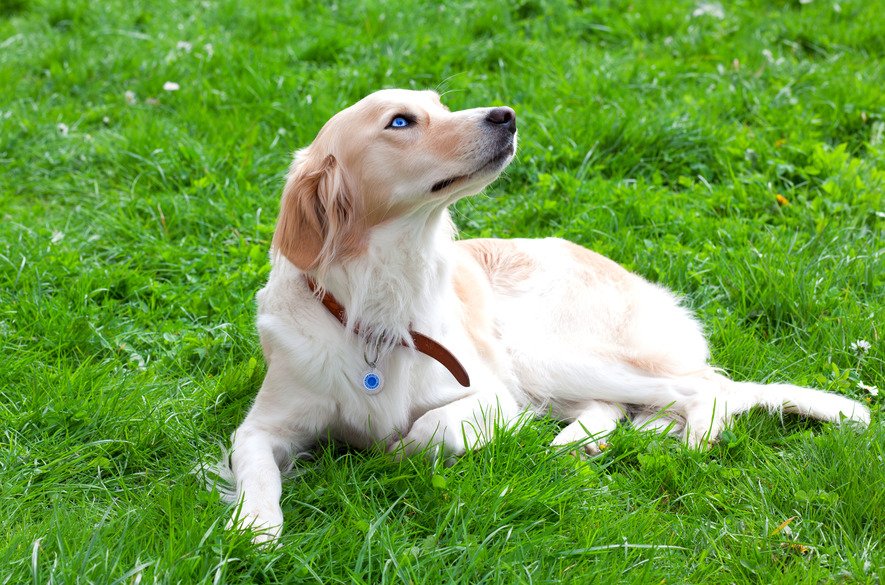 Although animals generally avoid this plant due to its strong scent, some curious creatures may be drawn to it. Typically, grazing cattle and horses will avoid this plant unless there is no other food available. Poisoning often occurs when Perilla Mint is cut and dried with hay, then consumed by horses and cattle.

The most toxic part of this plant is the flowers, and they are most potent when fresh. The risk for Perilla Mint poisoning is higher in mid to late summer when those flowers are in full bloom.

When ingested by horses, cattle, or dogs, Perilla Mint can cause emphysema and acute respiratory distress syndrome (ARDS). Both are respiratory illnesses that make breathing difficult. Symptoms include heavy panting and coughing.

How is Toxicity Treated in Dogs?

Pet toxicity is unfortunately a common occurrence, so it’s important to know what to do if you suspect your dog has eaten something it shouldn’t! There are many household products and common foods that can be dangerous for your dogs, like chocolate, xylitol, and grapes.

The first step to treating toxicity is to get your pet to the vet as soon as possible. The vet may administer an antidote to the poison if there is one. Depending on the substance and the amount ingested, the vet may need to induce vomiting. If poisoning is more serious, a vet may even need to pump the animal’s stomach.

How Do I Get Rid of Perilla Mint?

The easiest time of year to control Perilla Mint is in the spring. This is when the plant is still young and at its weakest. After it blooms, Perilla Mint becomes more hardy and tricky to control.

Perilla Mint has a shallow root system, so the easiest course of action is to pull up the plant by its roots by hand. If this proves too difficult, you can also use a herbicide spray. Herbicides made with aminopyralid are effective against clover, thistle, and mint. Apply herbicides in the spring for best results.

If you are growing Perilla Mint in your garden to cook with it, consider growing it in an enclosed area. Even better, grow Perilla Mint in a container in a greenhouse so it cannot spread.

Are There Other Poisonous Types of Mint?

Plants in the mint family are often planted for their pleasant fragrance, or to use for cooking. But some members of the mint family should be avoided due to their toxicity.

Pennyroyal (Mentha pulegium) is a type of mint plant which grows beautiful purple flowers. It looks remarkably similar to peppermint, but unfortunately,this species is extremely poisonous. It’s also considered an endangered species. You can grow it in your garden to enjoy its fragrance, but it should not be consumed.

Wild mint is another member of the mint family that humans should be careful around. The leaves of wild mint are often used to make jellies, but the fruit is very toxic. Keep this plant out of the garden if you have small children or pets.

Is Mint Plant Poisonous to Cats? 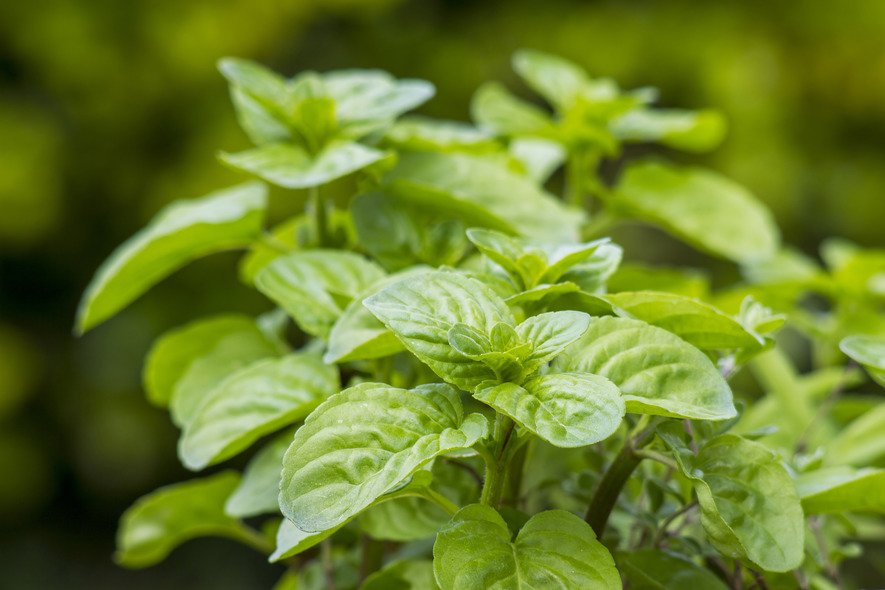 It’s not uncommon for cats to take a curious nibble on garden plants, so it’s essential to know which ones are safe and which aren’t. Peppermint, also known as garden mint, can cause gastrointestinal upset in cats when ingested. The essential oil in peppermint can relax the esophagus and make a cat more likely to vomit.

But not all mint species are dangerous for cats. Catnip is actually a part of the mint family! Catnip contains an ingredient called nepetalactone which is an attractant for felines–even lions and tigers! It can help stimulate play and is known to reduce stress levels. It’s rare for a house cat to overdose on catnip, but overindulgence can result in diarrhea and vomiting.

Can Dogs Eat Mint and Parsley?

You’d be surprised to know that some herbs are actually healthy for dogs! Parsley is commonly added to dog dental chews and breath-freshening products. It’s also high in vitamins A, K, and C. Better yet, it helps improve vision, and contains antioxidants to support your dog’s health.

Like any food, avoid giving your dog too much parsley. It is a diuretic that flushes salt and water out of the body. This can make your dog need to use the washroom more than usual.

Are Shiso and Perilla the Same?

Shiso is a cultigen of the Perilla Mint plant. Its full latin name is Perilla frutescens var. crispa. Its leaves have a similar shape and look to Perilla Mint, and are often burgundy or green colored.

Shiso is native to the mountains of China and Japan. Its name is a reflection of its prominence in Japanese cuisine. Shiso is often dried and sprinkled on top of sushi and noodle dishes as a garnish. The wide leaves are also typically used to present sashimi on a plate.

Unlike Perilla Mint, which has a strong anise flavor, Shiso’s flavor is closer to peppermint or basil.

Mint is a pleasant addition to the garden, and its fresh scent even helps attract birds and butterflies! Common varieties like peppermint are perfectly safe for humans. Although it’s not recommended that dogs eat peppermint, it is rarely fatal.

Perilla Mint on the other hand is a toxic and invasive species of mint. It often finds its way into pastures and hay stacks and can make grazing animals very ill. Dogs who like to munch on plants and grasses around the garden are also at risk.

Common symptoms of Perilla Mint poisoning include panting and coughing, caused by emphysema or acute respiratory distress syndrome (ARDS). If you think your dog has ingested Perilla Mint, take them to the vet right away to receive treatment.