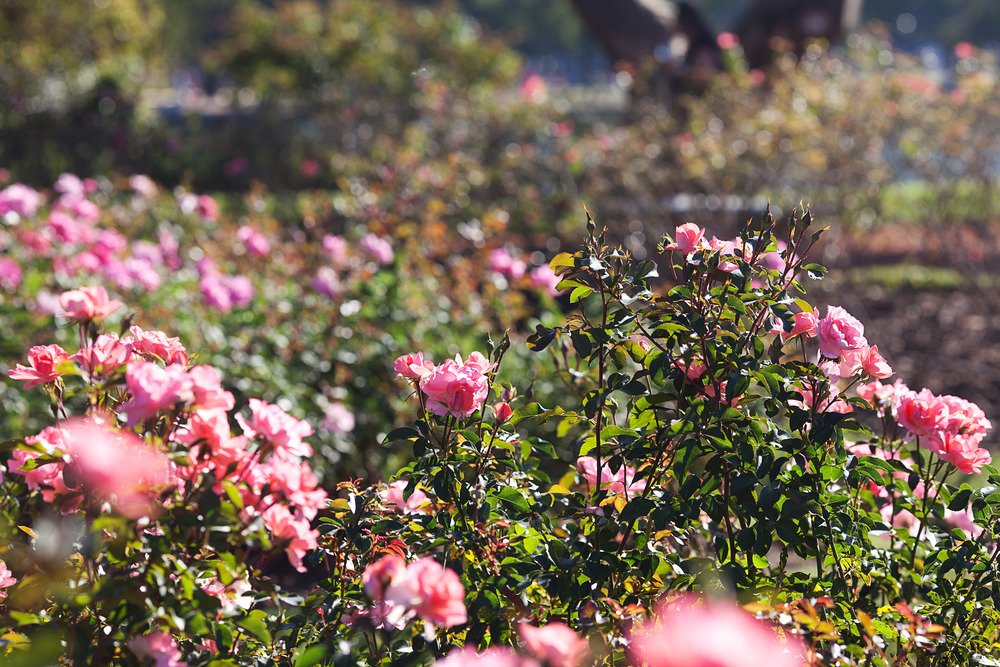 There are thousands of Rose varieties today. Some estimates say that there are well over twenty thousand. But most of these aren’t natural and can’t be found in the wild. You may wonder if Roses grow in the wild anymore or if all the ones we see today are synthetically grown and created.

While there are more cultivars than natural species and the ones we can buy in the store are often hybrids, there are Roses that grow naturally in the wild. Most natural ones originate from Asia, where many hybrids come from. However, there are plenty more worldwide, including some you may even find in your backyard.

There are about 150 species of wild Roses that grow naturally throughout Asia, North America, Europe, and Northwest Africa, and prefer humidity levels between 60-70%, with a temperature around 80°F (27°C).

Nowadays, we see Roses in various colors, but the most common color before hybridization is the pink-red color we usually associate with Rose, which bears the same name.

Roses are naturally occurring. About 150 species throughout the world are natural species and not bred or cultivated by people.

Most Roses originated in Asia. However, some are native to Northern Africa, North America, and Europe. It is thought that ten of the original species found in Asia created most of the species we see today in gardens and homes.

An interesting fact is that most Roses readily breed with one another, even if they are from another country. This means that a Rose from Africa and a Rose from North America may breed and hybridize, creating a new plant.

Are There Roses That Grow in the Wild?

Some Roses grow in the wild. Estimates say that even though there are well over twenty thousand different Rose species, about one hundred are considered wild Roses. These are often called Species Roses by botanists.

However, the reason they aren’t included in many wildflower seed packs that you can buy is that Roses are technically shrubs, and not just flowers, meaning they take up a lot of space.

What Is the Original Wild Rose? 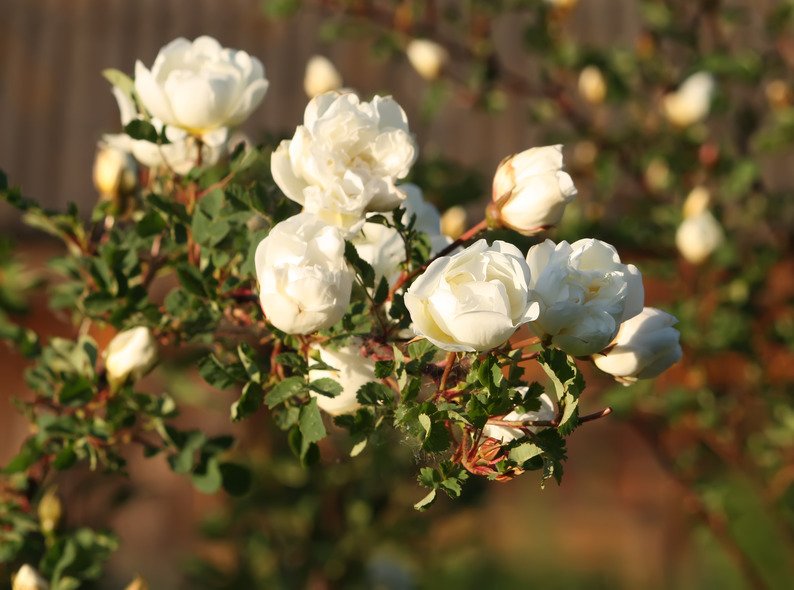 The original Rose, known as the Wild Rose Flower, is considered the first Rose. It appeared roughly seventy million years ago and existed even before the dinosaurs died. Pictures of Roses have been found even in Egypt, and they had a lot of health benefits, including vitamin C.

All modern Roses are thought to come from this one single species. While that species is no longer around today, there are plenty of ancient Rose species that are still available and are still well-loved by fans of the Rose flower.

What Color Was the First Rose?

We can’t know the first Rose’s color, as it was so long ago. However, it is a good guess that it was probably pink. Rose flowers came before the color, and the pink-red color that exists today under the name Rose was due to the typical color of these flowers. Since all Roses came from one species, it makes sense that the shared color is most likely the original color of the species.

No matter what the first color was, a Rose, even in the wild, can have various colors. The only color that is believed to not come to Roses naturally is blue. Most blue Roses you see are dyed, tinted, or painted.

Some shades could almost look blue, such as lavender, but true blue is hard to come across. Additionally, a true black is also practically impossible to come across, though some varieties may be so dark they look black.

What Environment Do Roses Grow In?

Roses do best in environments where they can get full sunlight. They also like soil that drains well and contains minerals and organic materials. They are usually more common in the Northern Hemisphere, specifically in Asia, North America, Europe, and northwest Africa.

They also prefer a fair amount of humidity, usually around 60-70%, and a temperature of approximately 80°F (27°C).

Where Do Roses Grow Best in the World?

Roses are most commonly found in Asia when naturally grown. This is where the majority of natural and wild Roses come from. However, currently, Ecuador produces the biggest and boldest Roses in the world for the flower industry.

Then there is the Netherlands. While Ecuador produces some of the best flowers, the Netherlands produces the most. They produce over three billion dollars of Tulips, Roses, and Lilies yearly.

Colombia, Kenya, and Ethiopia are also close behind. They all have a variety of climates, making them ideal for various types of Roses.

Where Do Roses Grow in the United States? 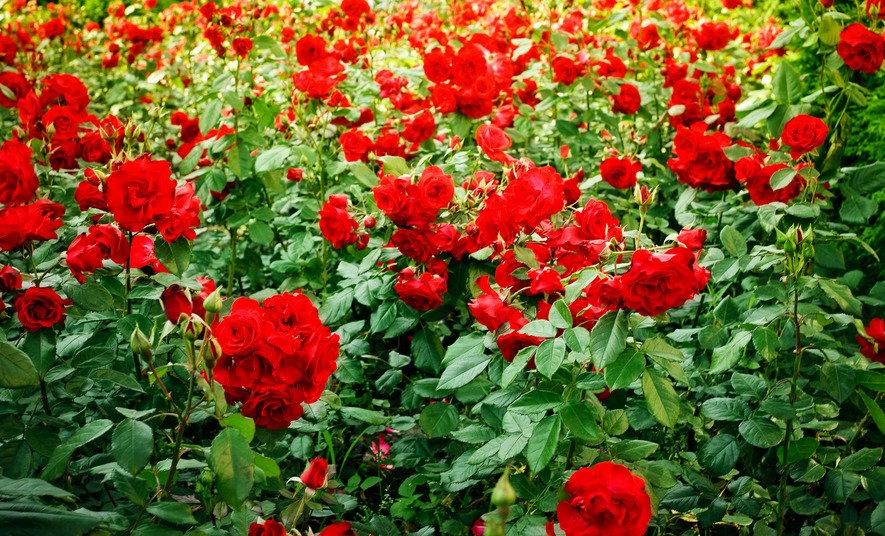 Roses often do best in the wild between Ontario, Canada, and Texas. They can go as far west as the Rockies. The Roses native to the United States and North America include:

For growing Roses outside, most of them do best in USDA zones from 13 to 5. Some of them can go down as far as zone 3, but it is rare. This means that they can easily grow anywhere in the United States except for Alaska.

If you have a wild Rose species, the northern states above Wyoming through Pennsylvania might be too cold for some species at certain parts of the year. While this doesn’t mean you can’t grow them in those states, it usually means that they have to be dug out for winter or kept in pots so you can easily take them indoors when it gets too cold.

Do Roses Take a Lot of Water?

In more temperate locations, Roses can often go with being watered about five gallons a week. This equates to about 2 inches (5 cm) of water a week or so. However, you may have to water more frequently in hotter locations or with sandier soil.

It is possible to overwater them. Like many other plants, the best way to tell if they need more water is to use the finger test by sticking your finger about 2 inches (5 cm) into the soil. If it is dry, it is time to water again.

As long as your Roses have well-draining soil, you can water as much as you feel necessary, and the excess water will drain away. Just ensure the area isn’t too soggy, or your Roses might start to wilt.

How Do Roses Grow in the Desert?

Roses can grow in desert climates. They might need to be shaded during peak sun hours to prevent damage to the leaves, but arid and hot climates work for some species. Check the individual species, as some Roses do better in tropical climates.

One of the most popular desert climates is the Lady Banks Rose or Tombstone Rose. These got their name from where they were first found in Tombstone, Arizona. They also have the record for having the largest Rose bushes.

There are about 150 species of wild Roses that grow naturally throughout the Northern Hemisphere, specifically in Asia, North America, Europe, and northwest Africa. Roses prefer humidity levels between 60-70%, with a temperature around 80°F (27°C).

They mostly grow in hot, humid environments, like the tropics of Asia, but some species have adapted to growing in more hot and arid climates, and some can even handle colder weather.