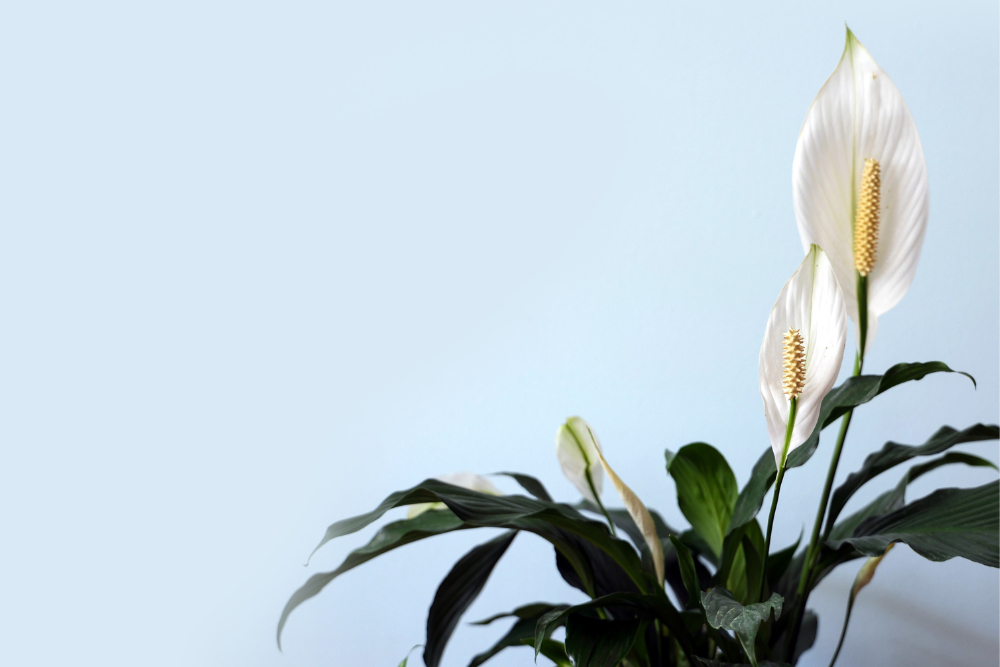 While Anthuriums are mostly referred to as being red, they do come in all sorts of colors. There are well over eight hundred different species. They can come in almost every color you could imagine. That usually makes them different enough to tell apart from the always green or white Peace Lily.

However, there are also White Anthuriums, which look very similar to Peace Lilies. When they share the same color, their differences are more notable than you might have imagined. So how do you tell them apart?

With these plants having different care requirements, you must know which plant you have. The Peace Lily has smooth, white flowers and is pointed upwards with narrow, bold vein leaves. White Anthurium has bold vein flowers in many colors and is downward pointing with wide, heart-shaped leaves.

There are more differences between these two plants, including how to propagate them, what kind of soil they like, and how to water them. However, don’t feel too bad if you struggle to tell them apart.

Is an Anthurium a Peace Lily?

An Anthurium is not a Peace Lily. They are two separate plants. However, they are both within the Araceae family and have some similarities. Anthuriums are of the genus Anthurium. There are eight hundred and twenty-five species of those Anthuriums.

Peace Lilies are in the Spathiphyllum genus. There are about forty-seven species of flowering plants in this genus, with Peace Lilies being one of them.

But that doesn’t mean they aren’t easy to mix up with one another if you don’t know what you are doing. Another name for Anthuriums, especially the red ones, is Red Peace Lily due to their similarities. They are referred to as Lilies, although neither species is closely related to traditional Lilies.

Thankfully, there are some differences between these two plants, which makes them easier to tell apart.

What Makes a Peace Lily Unique? 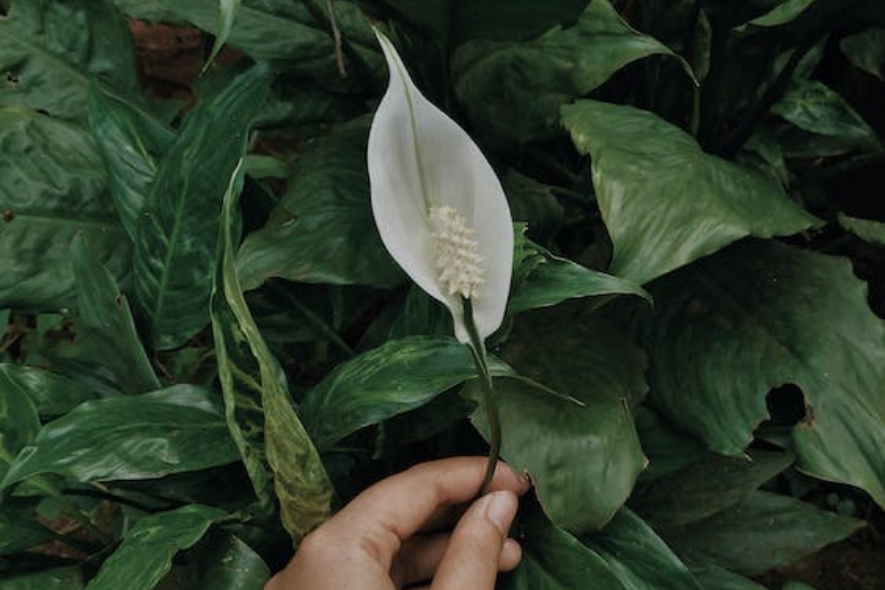 A Peace Lily is unique from an Anthurium in five main ways. These are the flowers, the leaves, their soil preferences, their propagation abilities, and their watering requirements.

Starting with its flowers, the Peace Lily tends to have narrow flowers. They are also usually a soft, not shiny, white color with a hint of green. The Anthurium and the Peace Lily have flowers that stand out from others. Instead of individual flower petals, all of the petals are merged into one, and there is a central yellowish gold spike that sticks straight up.

The leaves of a Peace Lily tend to be narrower than Anthuriums, though still pretty wide. They aren’t very heart-shaped either and have distinctive ridges of veins along the leaf. Peace Lilies have a bit glossier leaves as well.

Peace Lilies enjoy marshy environments and like their soil to stay moist. When you have a Peace Lily indoors, you want to give them some drainage, but you can allow for some moisture. It also reacts negatively to drying out.

To propagate Peace Lilies, you must use a cutting directly from the roots. The roots grow in unique clusters, so taking one of these clusters is how you propagate. It is similar to succulents and their pups, where you just transfer a pup to make a new plant.

Peace Lilies need a lot more water. They still need their soil to dry out between waterings, but Peace Lilies can’t handle neglect as much as Anthuriums can, and they may end up growing stressed and wilting rather quickly.

Is There Another Name for Peace Lily?

Peace Lilies are known by a variety of names. Though they are most known as Peace Lilies, they can also be called White Sails or Spathe Flower. The names seem to link back to the white flower it protrudes, similar to a white flag of peace.

Are There Two Types of Peace Lilies?

There are far more than two types of Peace Lilies. A good estimation is that there are about forty to forty-seven kinds of Peace Lilies. They range anywhere from miniature in size to giant. Despite their name, they aren’t part of the Lily family.

Peace Lilies only come in one color, though a few different shades exist. They can be any mix of white, cream, and light green. Since their name comes specifically from their white flowers, it makes sense that they are only white.

What Looks Like a Peace Lily but Is Red?

A plant that looks like a Peace Lily but is red is likely the Red Peace Lily. This is another name for the Anthurium. They look similar to Peace Lilies at a glance, but the Peace Lilies are not red, while Anthuriums usually are. 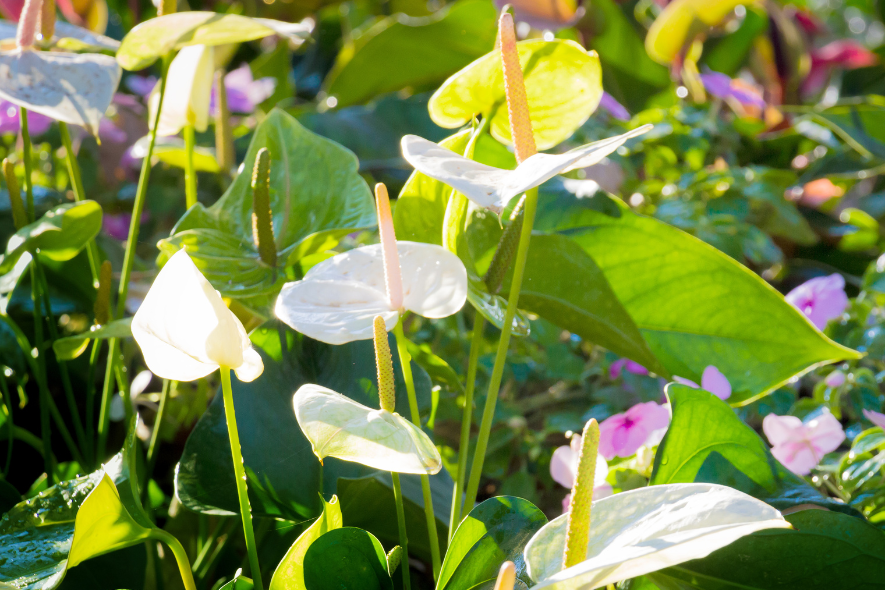 Let’s look at those five differences again. The major differences between Peace Lilies and Anthuriums are the flowers, the leaves, the soil preferences, propagation, and water requirements.

Anthuriums tend to have flowers that aren’t smooth. Usually, veins run through them, creating an uneven surface. Their flowers are also much shinier than you might expect, looking almost like plastic.

Anthurium’s leaves tend to be a lot more heart-shaped with a unique webbing of veins across the leaves. The leaves point downwards, with the tip of the heart facing the ground. The leaves are also much wider.

Anthuriums are also much easier to propagate than Peace Lilies. All you have to do is cut off a stalk from an Anthurium and plant it in a new pot to root.

While Anthurium likes water as much as a Peace Lily, they are much more drought tolerant than a Peace Lily and won’t start wilting dramatically when they don’t get enough water. However, Anthuriums are more sensitive to overwatering than their Peace Lily counterparts.

What Is the Common Name for Anthurium?

Besides being called an Anthurium and a Red Peace Lily, they are also commonly referred to as a Flamingo Lily or Flamingo Flower. Despite the name, they are not Peace Lilies or regular Lilies. Most of these names come from previous confusion about which plants were related to each other.

Other colors that Anthuriums come in are white, green, yellow, orange, pink, salmon, purple, brown, black, and many more. With eight hundred and twenty-five species of Anthuriums, you can imagine that these flowers come in almost any imaginable color.

Is There White Anthurium?

This can make it harder to tell the two flowers apart, though the five major differences remain. Though the colors match up, the Anthuriums are still very shiny, flatter, and have veins running through them.

Peace Lilies and Anthuriums may look similar from a quick inspection, but there are a fair number of differences between them. Not only do they look different, but their care is different too, so it is important to ensure you understand which plant is which so you don’t mess up their care.

The Peace Lily flower is empty of veins and usually pointed upwards with narrow leaves with bold veins, while White Anthuriums are glossy, more flat or downward pointing, and have veins on the flowers and muted veins on the leaves.

Peace Lilies are less shiny, usually stand more upright, and are always white. They like wetter, less drained soil and can’t be propagated easily via stem cuttings. Anthuriums are more drought tolerant, are available in many different colors, and can be propagated from a stalk. However, don’t feel bad if you still get them confused occasionally.