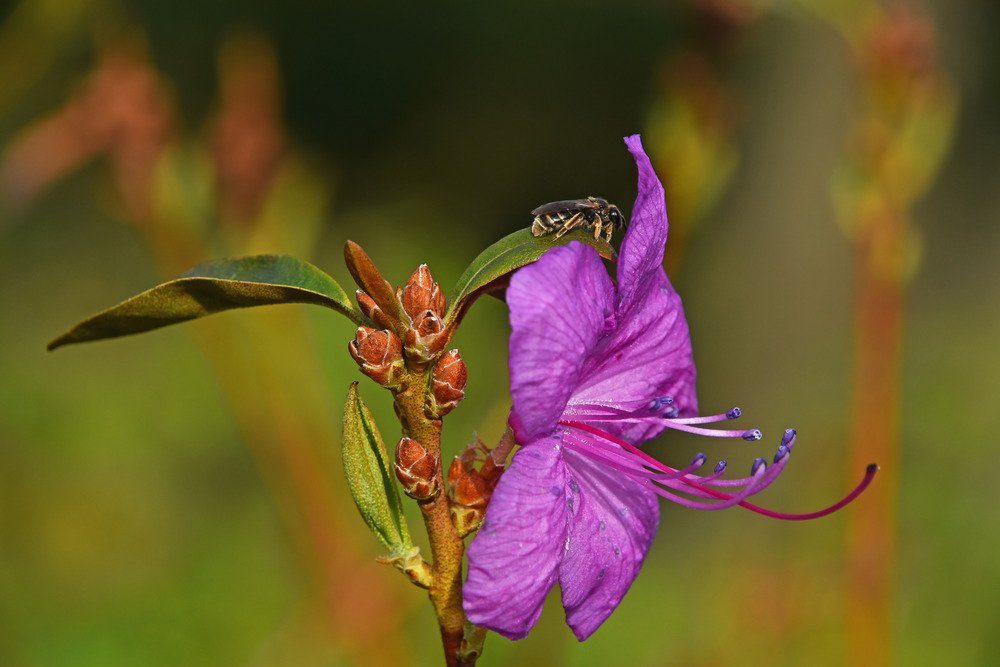 Azaleas are gorgeous flowers. They have a fantastic smell and plenty of colors that easily make them the main attraction of any garden. Despite being a little toxic to people, they are well-loved and favored by many gardeners.

It’s not just humans that enjoy these flowers either. Bees like Azaleas because of their high levels of nectar and pollen; however, Azaleas don’t always bloom at the right time of year, so bees aren’t always attracted to Azaleas.

Bees aren’t the only insects that love Azaleas for their nectar and color. Butterflies and hummingbirds are also very attracted to Azaleas due to their shape, size, color, and smell.

But don’t worry, although Azaleas are toxic to people when ingested, they aren’t very toxic to other animals, especially bees and hummingbirds that can easily fill up on their nectar without harm. Even young hummingbirds aren’t affected.

Unfortunately, pests can also be attracted to Azaleas and cause a lot of problems. Three varieties of pests are specifically named due to their habit of infesting Azaleas.

For the most part, bees are not attracted to Azaleas. This is because Azaleas bloom early in the season. Most start blooming in March, but some can bloom as early as February. Usually, these blooms are too early for bees, who don’t start searching for nectar to turn into their honey until summertime.

However, some Azaleas last long into the season. If you have one of these types of Azaleas, you will likely have bees flocking to your garden. Some Azaleas bloom from March to June, but others won’t start blooming and producing nectar until September. These Azaleas seem to be the best for bee species.

What Attracts Bees to Azaleas?

It is the nectar of the Azaleas that attract pollinators like bees. Like roses, Azaleas contain a large amount of nectar, enticing many animals, including bees.

Azaleas also have a lot of pollen. Pollen is a great food to give to bee larvae, so many bees will stop to collect some of the pollen. Since this plant offers both nectar and pollen, it is a highly desired plant for bees and other insects that eat similar foods to bees.

How Is an Azalea Pollinated? 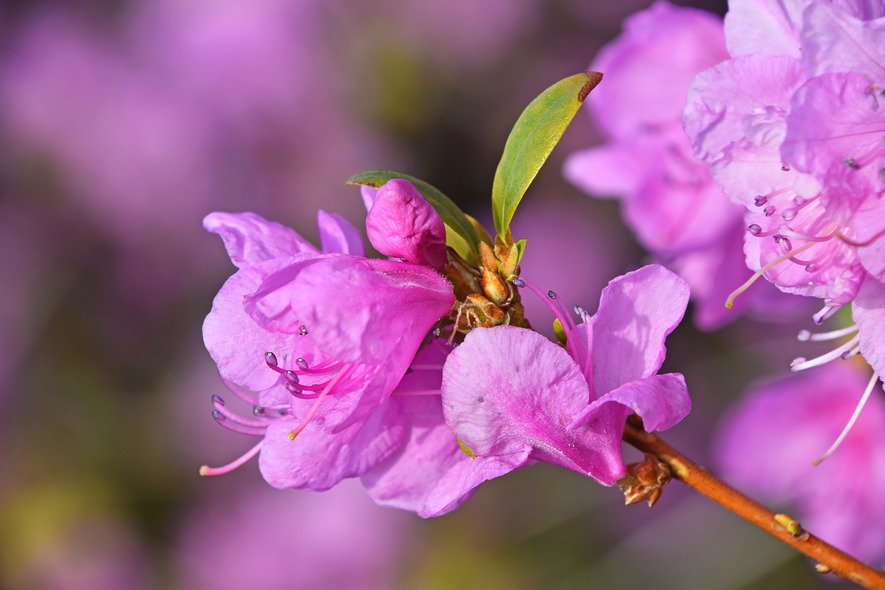 The Eastern Tiger Swallowtail is one of the main butterfly species pollinating Azaleas as they fan their wings and gather nectar. This fluttering allows them to come into contact with the parts of the plant that carries the most pollen, like the anther of the stamen.

Are Azaleas Toxic to Honey Bees?

A common myth is that Azaleas are toxic to pollinators like honey bees. While Azaleas and other Rhododendrons are toxic to humans, they do not seem toxic to other animals.

It is worth noting that if you have a bee farm, you don’t want them to collect nectar from Azaleas. This is because honey from these flowers can be toxic to humans. It isn’t very common, but if someone ingests a large amount of this honey, there is a good chance that it can be dangerous for people.

What Smells Do Bees Hate?

While bees are very beneficial, some people can’t stand them or are deathly allergic. If this is the case, then there are some smells you can rely on to keep bees away.

What Else Do Azaleas Attract?

Many animals and insects are attracted to Azaleas due to their fragrant smell and plentiful nectar. They are very popular flowers for people and animals alike.

Hummingbirds and butterflies are some of the animals that love Azaleas the most. Specifically, ruby-throated hummingbirds can commonly be found fighting over Azaleas. Sweet Azaleas are the most popular for hummingbirds.

The nectar is suitable for adult hummingbirds and babies since it is full of nutrients and filling. While the nectar is well-loved by the hummingbirds, it is the colors that attract them. Azaleas come in colors such as red, purple, pink, white, orange, and yellow.

Additionally, the shape of the flowers is perfect for hummingbirds. They are shaped like funnels, which makes it easy for hummingbirds to stick their beaks and tongues in.

Wasps are often more attracted to native plants than planted gardens. Unfortunately, since Azaleas are native to many areas, they do have the potential to attract wasps.

Thankfully, though wasps have a reputation for being purely evil, they aren’t very aggressive around flowers. They shouldn’t be inclined to sting if you don’t bother them too much.

However, there are some precautions you can take to help reduce your chances of being stung. The first is to be aware of your surroundings. You also want to wear shoes, so you don’t accidentally step on a bee or a wasp.

Don’t grab flowers without checking them out first. Sometimes, wasps may be in the flower, and when you pick them up, the wasp may be worried and sting you. Take care to move slowly through the garden, not to startle any wasps or bees that may be present, especially if you are moving the flowers around. 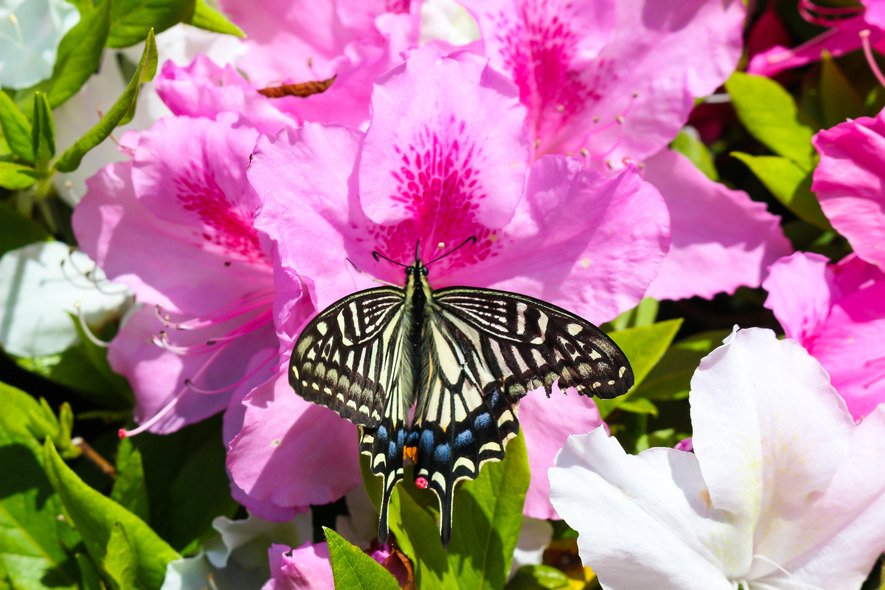 Azaleas are one of the common plants that monarch butterflies enjoy. Since Monarchs are endangered, it is always nice to have a garden that Monarchs enjoy to help them get food and reproduce.

Monarchs aren’t the only butterflies to enjoy Azaleas, either. Almost every species of butterfly enjoys feeding on these flowers. So if you plant Azaleas, you can be sure to see hundreds of butterflies in your garden.

Like hummingbirds, the bright colors of the flowers are one of the main attractors for butterflies. The flower size is also ideal, as butterflies can easily reach into the flower to get to the nectar.

What Other Insects Are Attracted to Azaleas?

While bees and butterflies might be pretty and beneficial to the flowers, only some insects attracted to Azaleas are useful. Some can easily be considered pests, as they are harmful and can damage the flowers and the rest of the plant.

In addition to bees, wasps, and butterflies, caterpillars are also attracted to Azaleas. There is specifically a caterpillar species known as Azalea Caterpillars due to their preference for Azaleas. These eat the leaves of Azaleas and can start to harm the plant over time, eventually destroying the bush if not controlled.

Azalea Lace Bugs are also a potential pest that can be hard to eliminate because these insects can fly. They also may be hard to detect because they tend to stay on the underside of the leaves.

Finally, there are the Azalea Leaf Miners. These insects do damage similar to caterpillars. It is a moth that feasts only on the plant’s leaves and can cause the leaves to turn yellow before they are destroyed.

Azaleas are very popular flowers. They are attractive with their prominent, bright flower colors and lovely smells. Many people get them for their gardens to add a stunning pop of color. However, it isn’t just people that enjoy these flowers. These flowers are attractive to a variety of insect and animal species.

Bees do love Azaleas, but they don’t always bloom at the right time for these pollinators. Plus, due to the size of the flowers, bees aren’t the best at pollinating these flowers. Instead, butterflies are the best for pollinating Azaleas with their wings.

Azaleas contain high amounts of nectar and pollen, which is a great food to give to bee larvae. It contains all the nutrients that bees need to grow and produce honey.