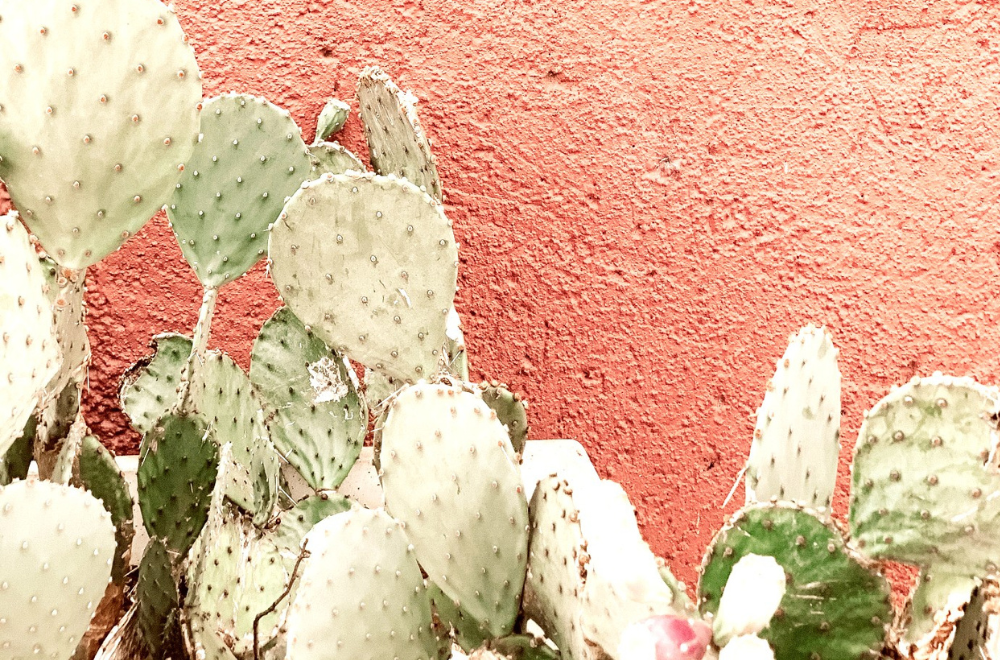 Indoor cacti are the perfect houseplant for minimalists. They’re slow growing, easy to care for, and don’t require much attention. If you’re lucky, your cacti may even produce blooms in summer!

A white cactus can be caused by scale from a mealybug infestation or scarring from a sunburn; though once a cactus gets older, it may also produce a white protective layer called corking, which is natural and protects the cactus from the sun.

So not all color changes are bad, but they’re worth looking into. Let’s look at signs to watch out for with your cactus.

What Does it Mean if Your Cactus is Turning White?

Like scale, white spots dotting your cactus can indicate a bug infestation. If the white coloration is developing from the bottom of the cactus, it could be a phenomenon called corking, which is normal and healthy. If the white spot is at the top of your cactus, this is usually due to sunburn.

Why is My Cactus Turning White and Spotted?

The last thing you want to hear is that your plant has bugs. But unfortunately, bug infestations are pretty typical for cacti. Cacti hold lots of moisture in their foliage, making them the perfect feasting grounds for sucking bugs like mealybugs.

Mealybugs are a scale insect, which means they have a protective scale exterior. This protects them from other predators and pesticides. An infestation of scale bugs is usually called “scale.”

Mealybugs are attracted to moist plants and often flock to a cactus that has been overwatered. They feast on the juice from cacti and then use that energy to reproduce quickly. This damages the plant and will eventually cause it to die.

To the naked eye, a mealybug infestation will look like patches of scaly white on your cacti. Mealybugs like to lay down a fluffy white substance to lay their eggs. Often, an infestation is mistaken for mold!

So how do you get rid of these little suckers? The easiest method is to blast them off with water. However, cacti don’t like to get wet, which might harm your plant even more. So, we recommend using rubbing alcohol instead. A cotton swab dipped in 70% isopropyl alcohol will penetrate the scale of the mealybugs and kill them.

Why is My Cactus Turning White at the Bottom? 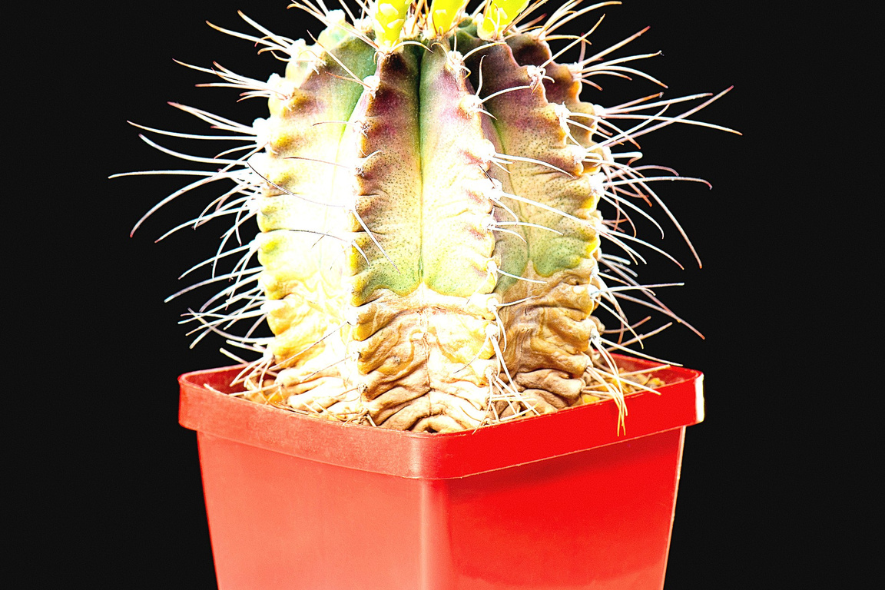 Corking is the development of a bark-like material on your cactus. It’s common in many species of succulents and cacti and protects the plant from the sun as it ages. Often corking will appear white or light brown. Although corking is a natural and healthy process, many plant owners mistake it for a fungus or disease as it covers up the plant’s nice green color. It can also easily be mistaken for sunburn.

Corking usually begins at the base of the cactus and grows further upward as the plant ages. So if you notice white appearing at the bottom of your cactus, corking is likely the cause. Rotting also appears at the bottom of the plant but will be more dark brown. Feel the affected area if you’re unsure if it’s rot or corking. Rot will feel squishy, whereas corking is hard and rough.

Why is My Cactus Turning White at the Top?

Cacti come from some of the world’s most arid, unforgiving environments. Sun and drought are the norms for these prickly plants. Even still, too much sun can damage their delicate skin.

Often, sunburn scarring happens shortly after a new cactus has been brought home from the store. Cacti at the nursery have been grown in greenhouses, with even amounts of light and heat. If you bring home a cactus and stick it right into a south or west-facing window, there’s a good chance it will scorch because it is not used to direct sunlight.

Scorched skin will turn pale and sometimes brown if the sun is very hot. Once a cactus has been sunburned, there is no way to heal the damaged area. The plant will eventually produce new green growth if the delicate roots have not been sunburned.

All is not lost for your plant if your cactus is white due to a mealybug infestation! Mealybugs make your cactus appear white, but the plant’s skin does not change color. If you use rubbing alcohol to kill and remove the mealybugs, your cactus skin may be damaged but should recover and stay green.

Cactus corking is a natural part of the plant’s aging process. Once the process starts, it cannot be reversed. However, you can limit the amount of corking your cactus produces. Corking happens quicker when the plant is in direct sun. Move your cactus to the shade to prevent or slow down corking.

Sunburned cacti can be tricky to revive. The first sign of sun damage is often that the skin turns pale and white. If the burn is severe enough, the area will become brown and hard, indicating that the tissue has died. Unfortunately, new growth will not appear in these areas, and the plant will be permanently scarred. 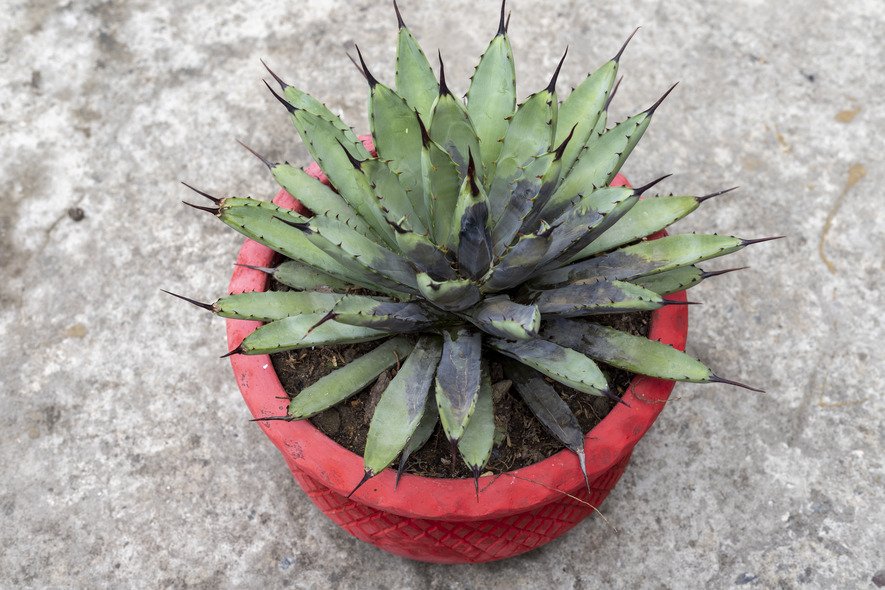 Soft Rot: Pathogens of this disease enter the cactus through open wounds and spread quickly. The result is watery, black cactus tissue.

Charcoal Spot: This disease is caused by the fungus Stevensea wrightii. It will first appear as small black spots. As the disease spreads to the rest of the plant, the spots get bigger and form a raised ring around them. Unfortunately, there is no cure for charcoal spot.

Cotton Root Rot: Cotton root rot is quite common with many cactus species. This fungus specifically attacks the roots of the cactus, so it’s not immediately noticeable. If you pull the cactus roots up, you’ll notice the brown fungus growing on them.

How Often Should a Cactus Be Watered?

It’s a common misconception that cacti don’t need water. Cacti require regular watering in order to photosynthesize and grow! But giving your plant the correct amount of water is important to prevent issues like root rot or pests due to high humidity.

Like many houseplants, cacti have a growing season and a dormant season. Cacti do most of their growing in the summer, so that is when you need to water them more. Usually, a cactus can be watered once every 2 weeks. During the fall and winter, when the plant is dormant, you can reduce watering to once every month.

Make sure you water your cactus in the morning so they have the day to absorb the water with help from the sun. It’s also best to water your cactus with warm water. Water between 86-104°F (30-40°C) is easier for their roots to absorb.

How Do I Make My Cactus More Green?

If your cactus looks a little pale green, it’s likely due to a lack of sunlight. Light (sun or artificial) is necessary for plants to photosynthesize. Photosynthesis is how plants produce food and have the energy to grow.

Photosynthesis also produces chlorophyll, which is what gives cacti their green color. If your cactus doesn’t get enough light, it will grow pale due to a lack of chlorophyll. If this carries on for long enough, your cactus will also suffer from stunted growth.

Cacti are generally hardy, but like any plant, they can be susceptible to disease and the elements. While a white cactus is not always a bad thing, any color change always calls for some investigation.

A white cactus can be caused by scale from a mealybug infestation, or scarring from a sunburn, though once a cactus gets older, it may also produce a white protective layer called corking, which is natural and protects the cactus from the sun.

Use rubbing alcohol on your cactus to get rid of a mealybug infestation and move your plant away from direct sunlight to prevent a sunburn and slow down the corking process. With these tips your cactus will grow and thrive in your care!