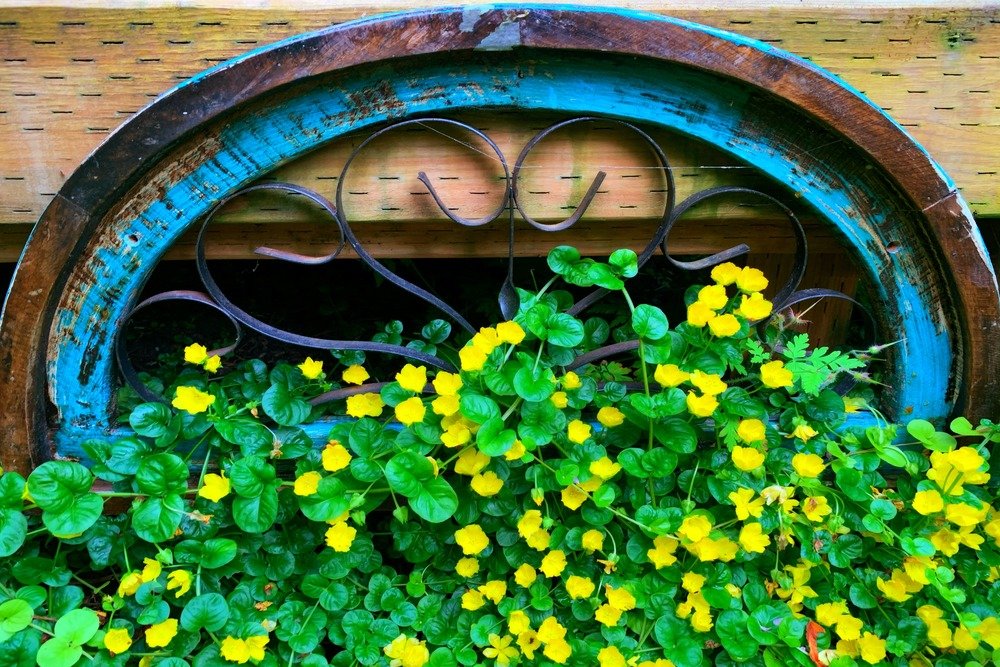 Creeping Jenny, also known as Moneywort, is a very tolerant plant. It can handle various temperatures, sunlight, and climates without additional care. However, that doesn’t mean that this plant is entirely indestructible.

A Creeping Jenny plant may be dying due to blights, disease, pests, underwatering, or too much direct sunlight with high heat temperatures.

While Creeping Jenny can sometimes change colors based on the sunlight they are given, they generally only range from yellow to green. If you live in a climate where they would go dormant for the winter, you may get yellow and red colors around fall.

But brown spots on the leaves are usually a sign that something is wrong and that your Creeping Jenny is in immediate need of attention. Thankfully, acting quickly and being ready with a fungicide or insecticide can solve most problems that plague this plant.

Why Is My Potted Creeping Jenny Turning Brown, Yellow, or Red?

If your Creeping Jenny is starting to die off, it may begin to change color. Creeping Jenny can change to red, yellow, or brown as a sign that something is wrong. However, before worrying too much, it is essential to note that Creeping Jenny can turn yellow if given enough light and that it is perfectly normal in some conditions. 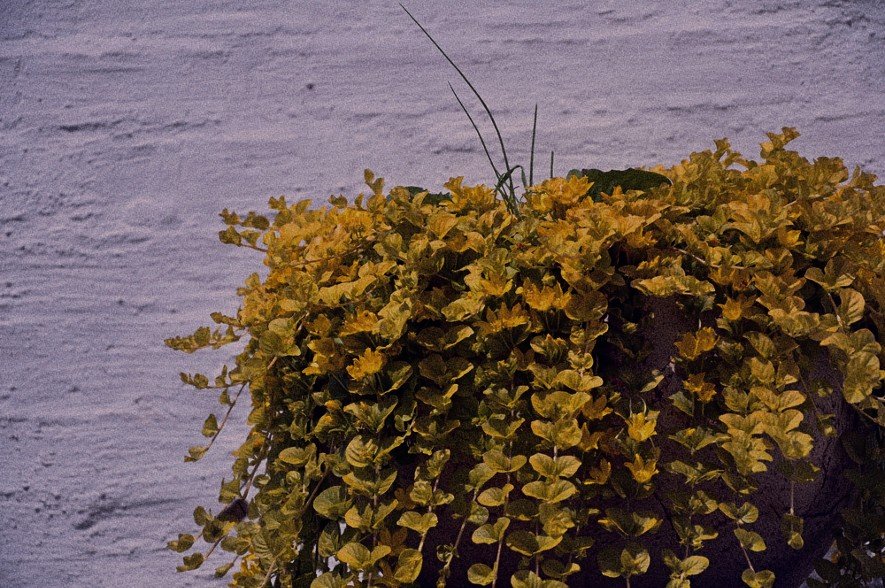 Unfortunately, Creeping Jennys are known for getting a fair amount of blights or diseases that harm them. Some common ones are Botrytis Blight, Southern Blight, and Phyllosticta Leaf Spot.

Botrytis Blight is caused by a fungus and enjoys cooler temperatures around 50 to 60°F (10 to 16°C). Because of its love of cooler temperatures, it can often be easily found on houseplants that are brought inside during winter. Any plant that you suspect of having this blight should be quarantined immediately to prevent any spread of the fungal spores.

Usually, the Creeping Jenny that is infected will start with yellow and brown outer leaves that slowly move to the inner leaves. Then moldy and spotty patches will begin to appear on the stems. Using a fungicide and quickly removing any infected stems and leaves is key to getting this blight under control.

Southern Blight is another blight caused by a fungus. This fungus is usually more common in warm and wet weather, however. The disease usually starts by causing brown spots on leaves. The leaves will then eventually turn black and die. Treatment for Southern Blight can be the same as treatment for Botrytis Blight.

Finally, there is Phyllosticta Leaf Spot. Despite not being a blight, this leaf spot is also caused by a fungus. Usually, this fungus spreads through the water-conducting tissue of the plant, preventing it from absorbing the water it needs. Eventually, the leaves will discolor and die.

Generally, as the name suggests, you start with leaf spots that are small and usually black or brown on the leaves. Eventually, the spots will grow bigger until the disease kills the leaf. Treatment is the same as the other two diseases.

Incorrect watering can also cause your Creeping Jenny to start to die. Generally, a Creeping Jenny needs a lot of water. They prefer not to have their soil stay dry, and it should remain moist, even between waterings.

One of the biggest pests that can harm a Creeping Jenny is Red Spider Mites. They are almost impossible to see with your naked eye. However, when many sit in one area, they can turn red in bright light. Often, they are found on the undersides of leaves.

Using natural insecticides like neem oil or an insecticide you find in the store is suitable. Just make sure you focus on the undersides of leaves and crevices in the stem where they might be hiding.

Creeping Jennys prefer cooler and shadier areas. While they can stand the full sun and hot temperatures for a while, the plant will eventually start showing signs of stress. Generally, they will begin by turning brown due to sun stress and wilting.

While brown and yellow are typical colors for plants to change to when they are not doing well, red is relatively unique. So what does the red color on your Creeping Jenny mean?  Red can signal a phosphorus deficiency or heat or cold stress.

Creeping Jenny can turn brown in winter. In most warmer climates or when indoors, Creeping Jenny does have the potential to grow throughout the winter. However, if you live in a colder climate, your Creeping Jenny may start to go dormant.

So if it starts growing colder, and your Creeping Jenny starts to turn brown, it might be due to it growing dormant and not something wrong with your plant. In US Hardiness Zones 2 to 10, your Creeping Jenny can act as an evergreen, but in other zones, it may be more of a perennial.

How Often Should I Water a Creeping Jenny?

Creeping Jenny plants like a lot of water and enjoy moist soil. Generally, if you do the soil test, you only want the top half inch (about 1 cm) of the soil to be dry. Any more than that, your plant will likely show drought stress.

Creeping Jenny plants can handle a variety of different conditions. They are good anywhere from full sun to partial shade. They prefer full sun as long as they don’t get too hot or dry. The leaves of a Creeping Jenny can also change based on the amount of sunlight they get.

In full sun, a Creeping Jenny will have more of a golden yellow color. In partial shade, they can turn more to chartreuse green. However, if they are in a hot climate and get full sun in the afternoon, the leaves may bleach and turn white, harming the plant.

What Temperature Can Creeping Jenny Tolerate?

Creeping Jenny plants prefer warm temperatures but are pretty hardy to the cold. They can reach about 30°F (- 34°C). However, in colder temperatures, they will start to go dormant, losing their leaves and flowers until it grows warmer.

They can also handle hot temperatures, going up to 140°F (60°C), as long as they aren’t kept in full sun when it is that hot out.

Where Does Creeping Jenny Grow Best?

Creeping Jenny enjoys full sun and will thrive under those conditions as long as it isn’t too hot out. It does best in US Hardiness Zones around 3 through 9. In these conditions, it will often stay an evergreen plant since it won’t be cold enough for them to grow dormant.

Additionally, the full sun gives Creeping Jenny the ability to produce bright yellow leaves that they are well-known for. If you are in a hotter area than they prefer, which is between 55 to 75°F (13 to 24°C), then it may be wise to put them somewhere the Creeping Jenny can get respite from the hot afternoon sun.

Creeping Jenny can be planted pretty much any time of the year in these conditions and most soils. Once established, it needs little care besides frequent watering if you live in a dry area.

They make an excellent ground cover, replacing standard grass with ease. Or, it can be used to stop bare spots underneath big trees and other perennials. The Creeping Jenny is also easy to propagate. You can take a cutting and let it establish new roots or dig up a section of your Creeping Jenny and place it in a new location.

Creeping Jennys are incredibly tolerant plants. They can handle hot temperatures up to 140°F (60°C) and freezing temperatures down to 30°F (- 34°C) without a problem. While they do have an ideal range, they can adapt pretty easily. Their ideal temperature range is between 55 to 75°F (13 to 24°C).

The most common problems that Creeping Jenny faces are blights, disease, pests, and water issues, though sunlight can become a problem under certain conditions that cause them to start dying. It’s important to water frequently and ensure the soil stays moist and your Creeping Jenny receives enough sunlight but isn’t exposed to very high temperatures for a long period.

Some pests, like red spider mites, can cause serious issues and lead to the plant dying if not taken care of properly. Otherwise, as long as they get plenty of sun and water, they will do fine on their own.