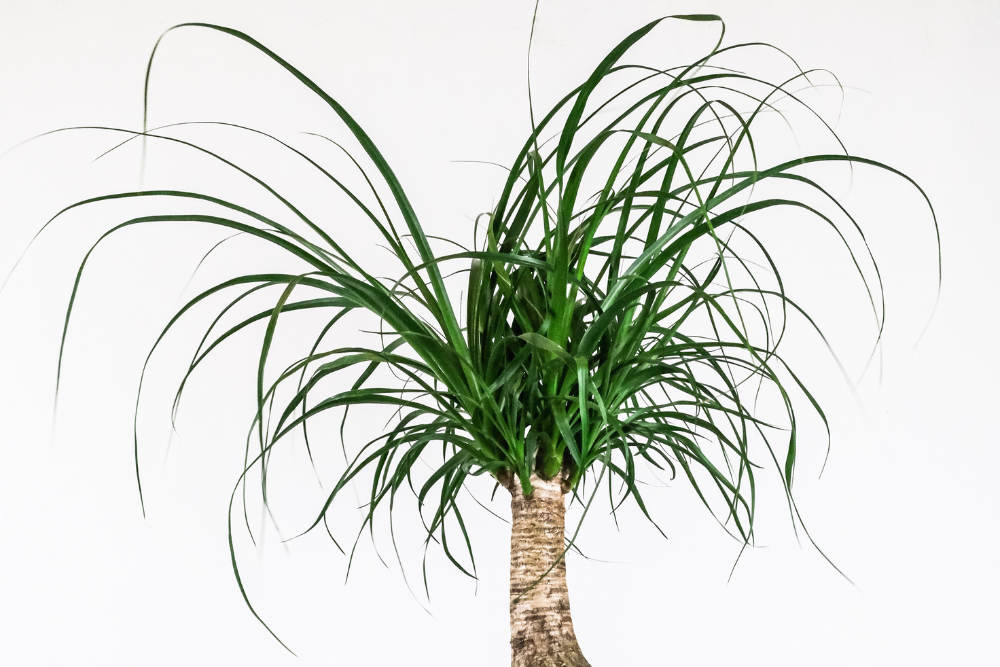 Beaucarnea recurvata, affectionately known as the Ponytail Palm or Elephant’s Foot, is a beautiful and very easy-to-care-for houseplant, as long as you embrace its unique care requirements.

If your Ponytail Palm appears to be dying, the problem is likely caused by overwatering and will require immediate action to save your plant from root rot.

Unfortunately, most people mistake their Ponytail Palm’s tropical appearance for a tropical houseplant when their care actually resembles a succulent or cactus. While underwatering can eventually kill your plant or at least leave it looking pretty unhappy, the chances of revival are much higher. Other possible concerns that can leave your Ponytail Palm unhappy include pests, pet damage, or frost damage.

If your Ponytail Palm is suffering greatly, it may appear to be dying. The symptoms will vary depending on the cause, but some signs to look out for are crispy brown leaves, predominantly yellow leaves, or no leaves. The thick stump could also have dark spots and turn mushy, which is a sign that your Ponytail Palm isn’t doing well.

How Do You Revive a Dying Ponytail Palm?

How you revive a dying Ponytail Palm will depend on the problem causing it to do poorly and the severity in which the problem has advanced. While you can take drastic measures to revive your Ponytail Palm, there is a slight chance that you cannot rehabilitate it, but don’t give up until you have tried everything.

Like succulents, Ponytail Palms prefer bright sunny conditions and infrequent watering. They can store water reserves in their large trunk-like stems, meaning they need very little water. They must dry out completely between watering and can withstand more extended drought periods, particularly in the winter when there is less sunlight and cooler temperatures.

Last, they do not tolerate sitting in wet soil and can quickly develop root rot if you water them too frequently, and the soil remains saturated.

How Do I Know if My Ponytail Palm has Root Rot? 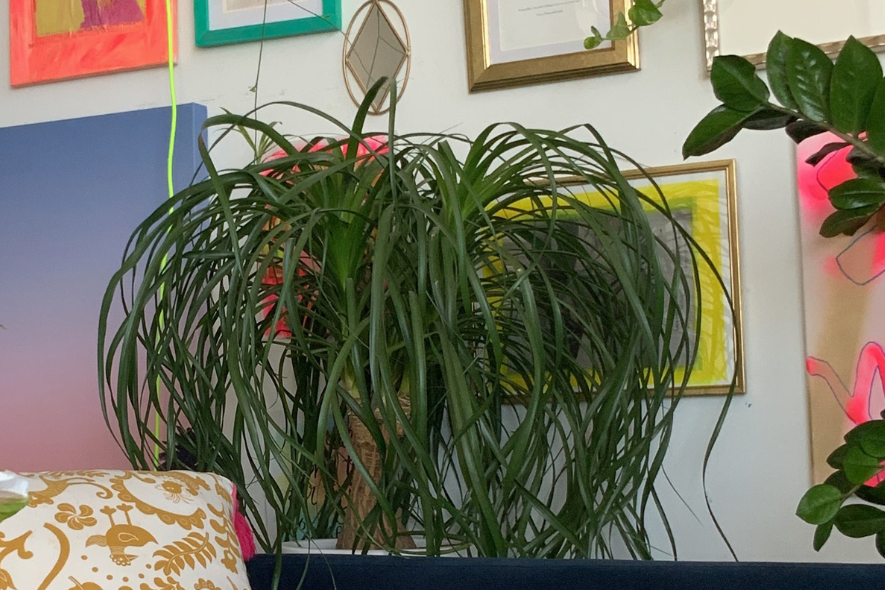 Here are some signs that your Ponytail has root rot caused by overwatering:

While crown rot can be a symptom of root rot, occasionally, crown rot can be caused by other issues. For example, your Ponytail Palm may be buried too deep in the soil, subjecting the crown to excessive moisture, particularly if it has been overwatered.

If your Ponytail Palm is experiencing crown rot, the road to recovery will be challenging. Let the crown completely dry out, and you can attempt to brush away the rot gently with a dry toothbrush.

Can A Ponytail Palm Recover From Overwatering?

Whether your Ponytail Palm can recover from overwatering depends on the severity of the damage. You cannot reverse rotted roots and stem, which means that a Ponytail Palm with crown rot will be tough to save, especially if the rot has started at the roots and traveled up into the crown and trunk of the plant.

On the other hand, if you caught the overwatering issue in time before significant damage has set in, your Ponytail Palm may make a full recovery.

How to Treat Root Rot In Your Ponytail Palm

If your Ponytail Palm has root rot due to overwatering, here’s how to treat it:

How to Prevent Overwatering

The best way to prevent root rot or crown rot from overwatering is to give your Ponytail Palm extended periods between watering. At a minimum, the soil should be completely dry, but you can hold off a little longer than that to be on the safe side. This is particularly important during the winter when there is much less light.

Make sure that your Ponytail Palm has a well-draining soil mix, such as a cactus blend, or you can mix your own by adding bark, perlite, or pumice to the soil. The pot you keep your Ponytail Palm in should have good drainage, and they will appreciate a clay or terracotta pot which will help draw extra moisture away from the soil.

Why Is My Ponytail Palm Unhappy? 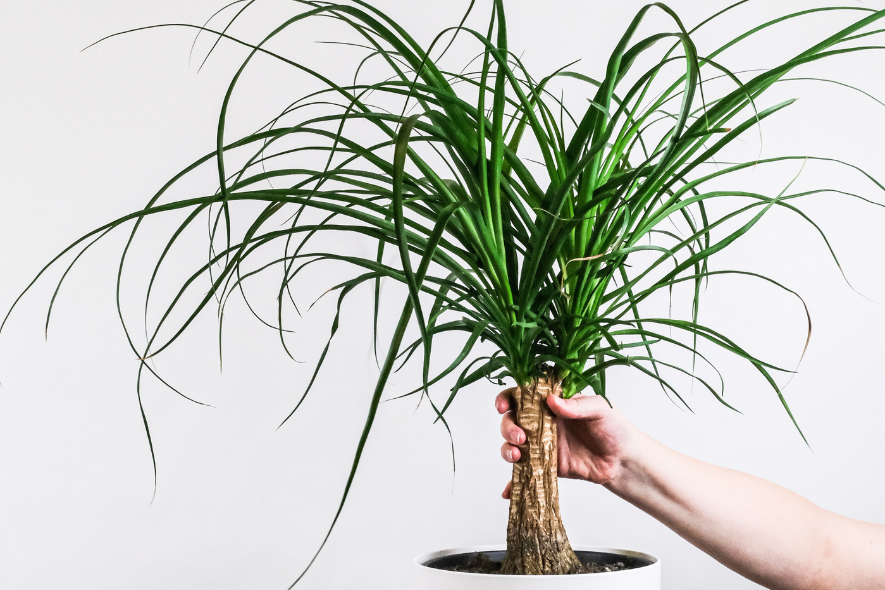 While overwatering is often the biggest problem that Ponytail Palms experiences, there are a few other conditions that may make it appear very unhappy.

While Ponytail Palms are drought-tolerant, neglecting to water them altogether can cause problems. If your Ponytail Palm is underwatered, the leaves turn yellow or brown, beginning at the tip and slowly moving inward.

Unlike overwatering, these crispy leaves will start at the underside of your Ponytail Palm as they are older growth and more expendable to preserve the rest of the plant. In addition, you will want to be careful not to let your Ponytail Palm drop too many leaves due to underwatering, as those are vital for photosynthesis.

Giving your Ponytail Palm plenty of light is crucial, but if kept too close to a windowsill, you may notice portions of the leaves turn brown and crispy. This crispiness will be localized to leaves near or touching the cold windowsill.

You can easily fix this by trimming away the crispy foliage as needed and moving your Ponytail Palm further back from that cold windowsill. While Ponytail Palms can withstand a temperature drop between 50-55°F (10-13°C)  in the winter, ensure it isn’t exposed to extremely cold temperatures and drafts that can shock the plant.

Ponytail Palms are prone to pests that you may commonly see on other succulent-like houseplants, such as mealybugs or scale. In addition, you may also find spider mites in their leaves. You can easily identify mealybugs by their fuzzy white appearance, but fortunately, they are easy to remove from your plant.

You can use rubbing alcohol cotton swabs to kill any individuals and treat the plant with insecticidal soap. Insecticidal soap treatments and neem oil will also work well for scale and spider mites. When treating your plant for pests, don’t get the soil wet too frequently.

Ponytail Palms are widely popular because they are notably pet-friendly. According to the ASPCA, Ponytail palms are non-toxic to cats, dogs, and horses. There is a caveat: Ponytail Palms are attractive to cats, who will play with their bouncy foliage and eat their leaves.

While not toxic, consuming any houseplant can still give your pet gastrointestinal upset, so it’s best to keep it out of reach. If your cat has eaten away nearly all the leaves, photosynthesis will become extremely difficult for your Ponytail Palm, and it may not recover.

Will Ponytail Palm Leaves Grow Back?

If you have to prune back Ponytail Palm leaves for any reason, the leaf itself is unlikely to grow back, but you will find that eventually, more leaves will start to grow from that particular offshoot. This tends to take a bit of time, so if you have had to perform any life-saving measures involving leaf pruning, give your Ponytail Palm time to make a full recovery before expecting new foliage growth to return.

Ponytail Palms are beautiful, playful houseplants that thrive even in harsh conditions. Catching any problems early on is one of the best ways to ensure that your Ponytail Palm survives any issues.

If your Ponytail Palm appears to be dying, the problem is likely caused by overwatering and will require early detection and immediate action to save your plant. Other issues that can plague your Ponytail Palm are underwatering, frost damage, pests like mealybugs, and pet damage.

Unfortunately, once they start to go downhill, they can be challenging to rehabilitate, but it isn’t impossible. Give your Ponytail Palm plenty of time and patience through its recovery process; hopefully, it will bounce back so you can continue enjoying it.